Detective Grover closes in on Nash’s violent stalker. Will Nash be able to put the past behind her and face the truth to bring them to justice? 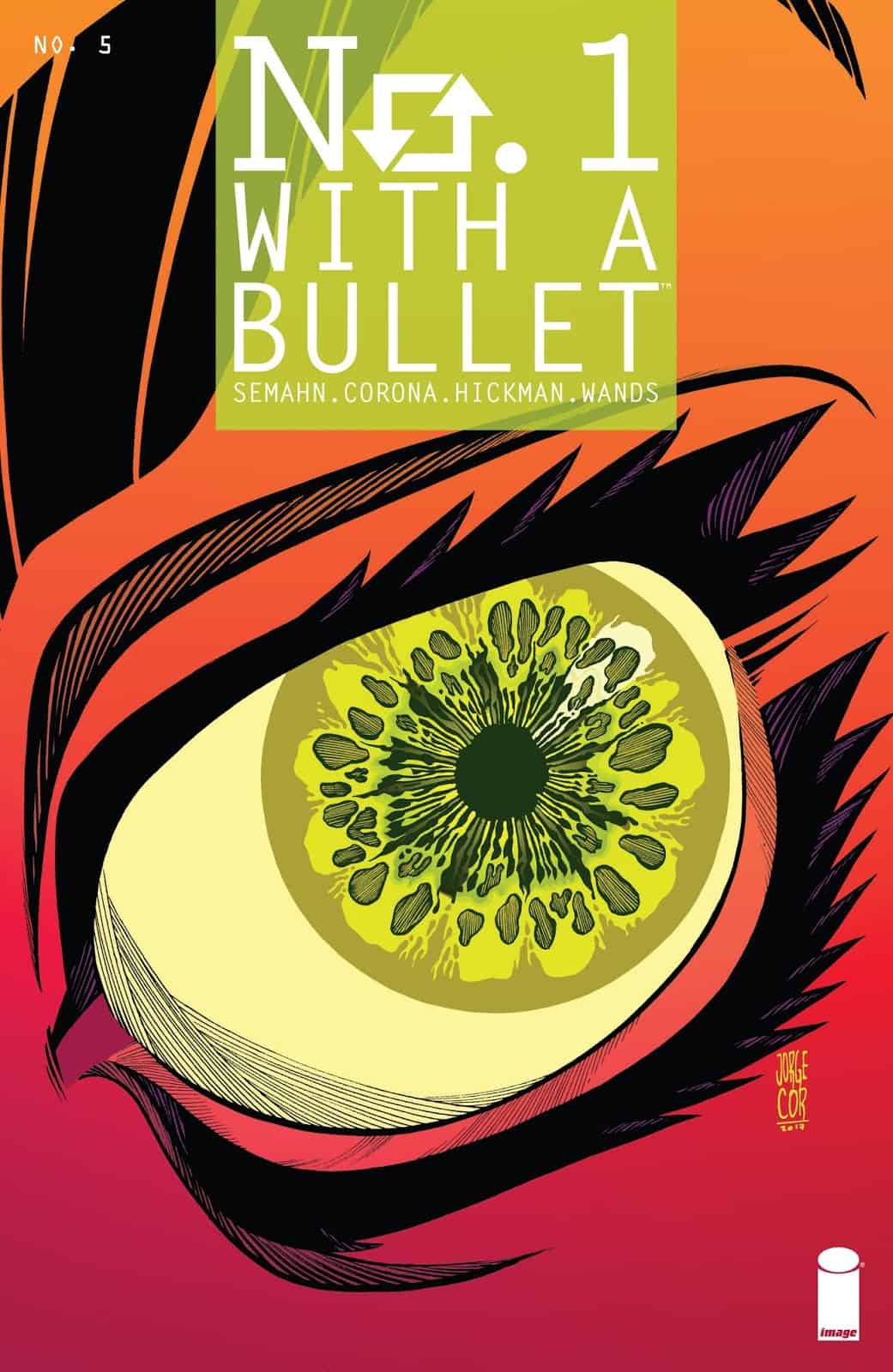 In the not too distant future, a social media addicted 20-something named Nash Huang deals with an internet hacker, who has released her non-consensual sex tape to the world. In the fallout of the scandal, her girlfriend has left her, she’s been fired, and the entire world looks at her in new and gross ways. After feeling she shouldn’t have to bear the burden of shame alone, Nash admits in a live stream that her former boss, Jad Davies, was the creator of the recording. After realizing her confession was encroached upon by a mysterious figure peeking out of her closet, she finds that someone has broken into her home and left a cryptic message on her wall.

After reporting the incident, Nash’s stalker is investigated by a detective named Grover. Meanwhile, media reaction to Jad’s involvement in the scandal has left him legendary. Jad’s PR manager couldn’t be happier about it, but Jad is having some mixed feelings.

Nash’s friend Rico decides to take her to the Museum of Death, where Nash experiences a vivid hallucination of the Black Dahlia and accidentally destroys half the museum in hysterics. They are arrested but quickly released with Grover’s help.

Jad, trying to ease his guilty conscious after days of media coverage, prepares a statement for a live taping in which he admits to filming Nash without her consent. After he endures the anger of his lawyers, employees, and his wife, he decides to change his story and lie. Nash, seeing this taped confession while trying to compose herself at Rico’s, loses her grip on reality again and stumbles home in a daze. Grover, waiting outside, sees a shadowy figure and pursues, thinking it to be Nash. Upon entering an alley, he is attacked and left beaten.

Jad, at home celebrating his victory as the media continues to exonerate him because of his lies, receives a text and decides to leave home to head towards his ex-wives house, not realizing he’s been hacked. Upon getting in his car, his GPS system is also hijacked, and while driving down a cliffside road, Jad flies through the guardrail, headed for the ground below.

Detective Grover is in the emergency room after his ambush. As he’s receiving treatment for his swollen eye and concussion he answers a call confirming that the IP address for his hacker goes back to Violet’s home. Upon searching Violet’s home, he finds a picture of Nash with her eyes torn out with the same cryptic message left on Nash’s wall, and the crowbar that was used to attack him. Suspicious that it’s all too neat, he reports what he’s found to Nash, interrogating her on Violet’s past behavior. Nash disputes Grover’s findings, arguing that Violet doesn’t have any skills that might lead Nash to believe she was capable of the online harassment she has endured. Grover directs the conversation to Violet’s past behavior, asking if she’s ever shown any strong feelings of jealousy. Nash recalls a time in which a man bought her a drink at the bar and Violet flew into a jealous rage but withholds the memory from Grover.

Leaving an officer positioned outside, Grover leaves Nash on her own. Distraught, Nash attempts to put in her contacts but is unable. She receives a notification from a messaging app from her stalker eloquently stating Nash will no longer have to worry anymore with a cryptic goodbye. Nash, horrified at what might happen if this is indeed Violet, sneaks out and tries to interrogates Violet’s former employer as to her whereabouts. Informing Nash she hasn’t been to work in weeks she tells Nash that she needs to leave immediately.

Driven by nostalgia, Nash ends up on the boardwalk where she and Violet had their first date. When she reaches the end of the pier, she sees Violet turn to her and jump into the water. Diving in after her, Nash realizes she is hallucinating. She envisions Jad and the man who jumped from the building in front of her try to drag her into the depths of the ocean. She awakens moments later on the beach to crowds of people laughing at her, which sparks the realization that something isn’t right. Running home, Nash believes that the hallucinations are caused by her augmented reality contact, but as she digs into her eye, she realizes that today was different. Today she couldn’t put in her contacts. 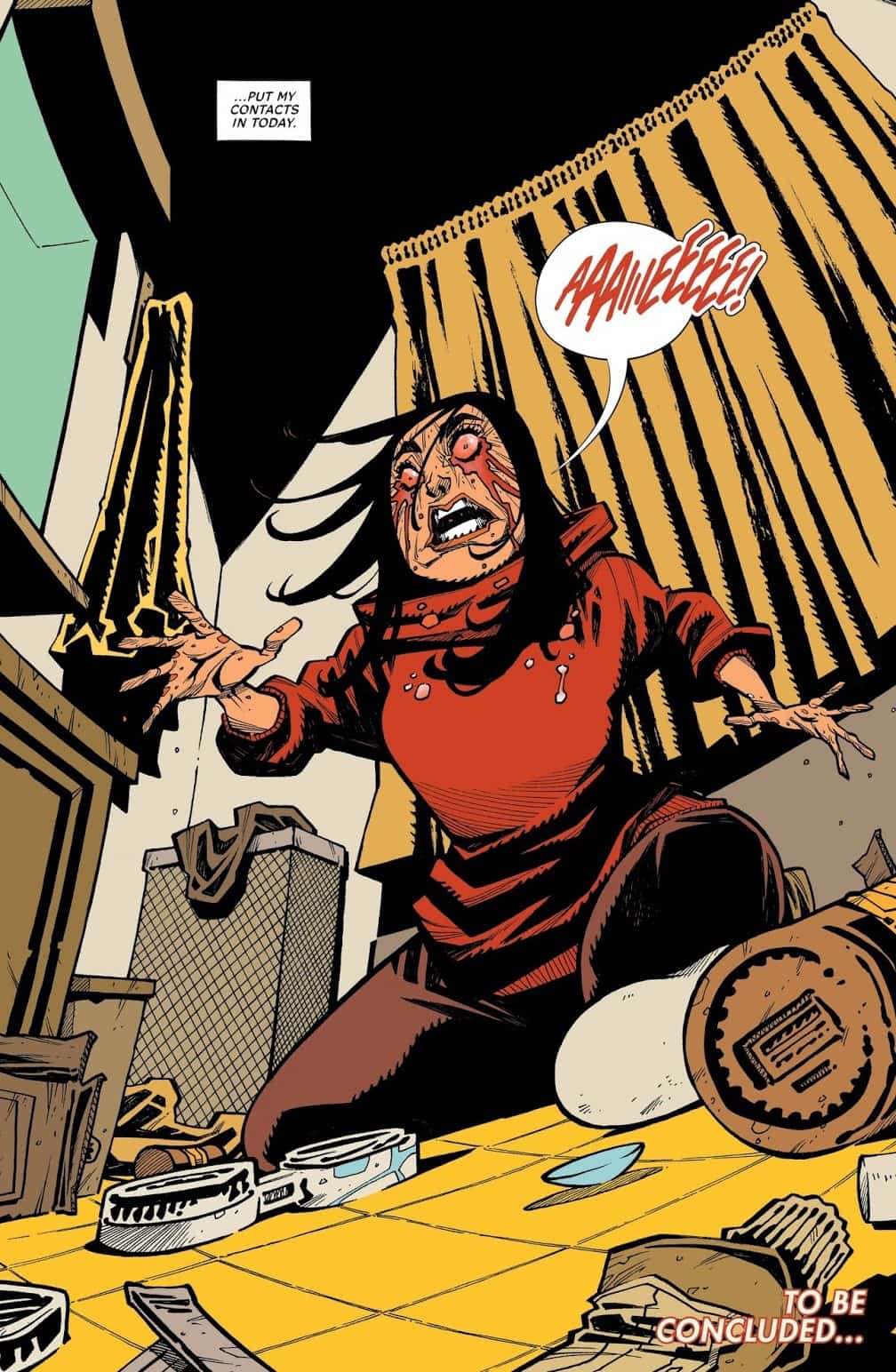 In a final page reveal that is led up to beautifully, it appears Nash has not been wearing her contacts while having her hallucinations, and there is another element at play that causes her to, quite literally, scratch her own eyes out.  The last few pages focus on horror driven torture of the eye. A horror trope that seems to have left comics since the days of the Comic Book Code, the use of it here as a way to reveal the perception of reality is very graphic. The use of blood, discolored eyes, veins and the final page all culminate in a very creepy and unsettling moment, and a big reveal, for the reader.

Corona’s art once again shines in this issue. Using a lack of clear panels borders and grid layout to relay Nash’s hallucinations and knock the reader off balance, he brings the moment to life creating a chaos that drives the reader forward and leaves them feeling the after-effects of whiplash. 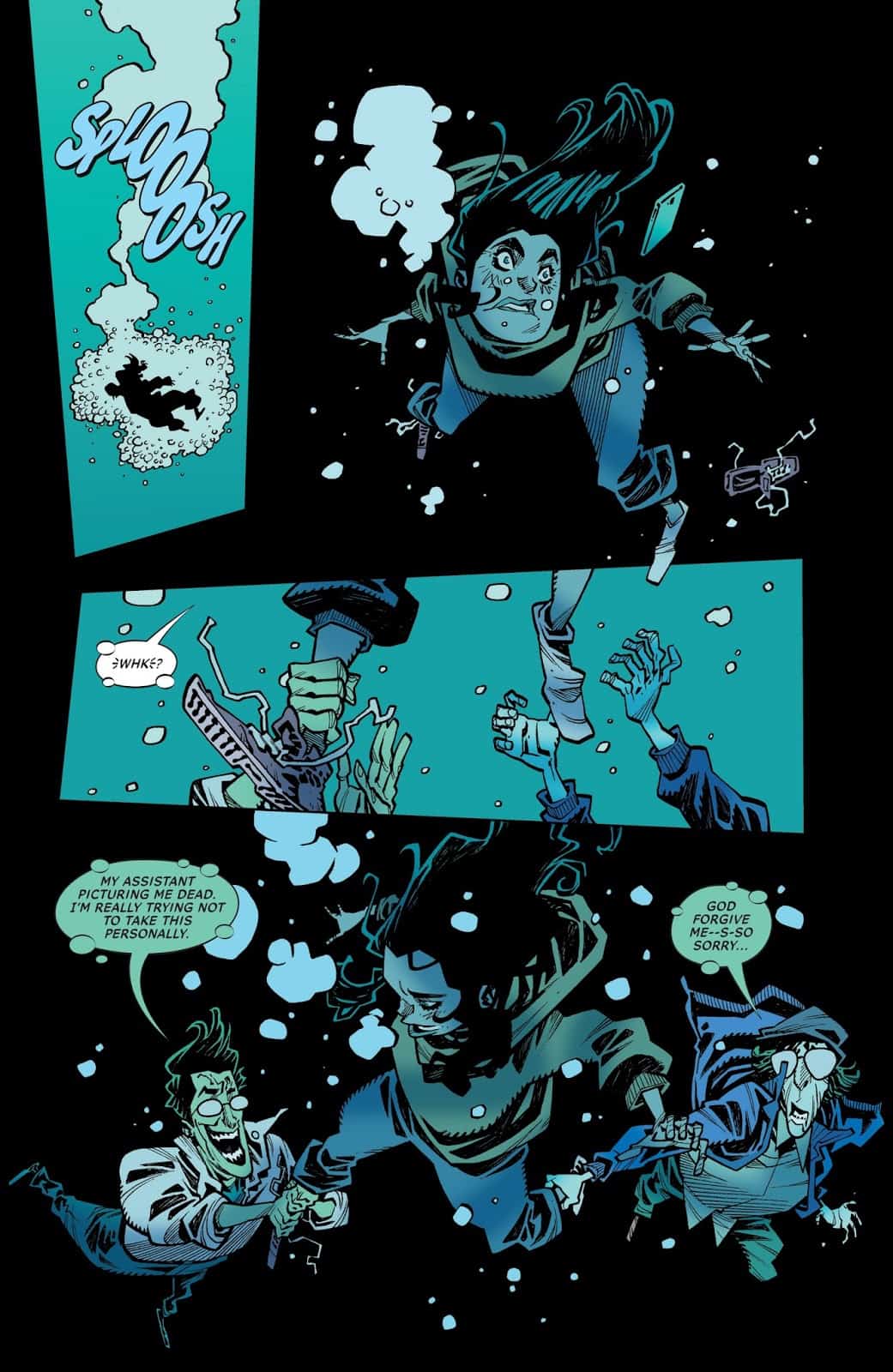 The final pages recall the many times the contacts, eye drops, the writing on the walls, even mirrors, all were revealing the truth throughout each issue. A masterful twist leading into the final moment of the issue. The final pages of art help drive this home switching between the past and present as Nash slowly gouges her own eyes out.

Utterly creepy and unsettling, this issue is one of the best to date. While it was easy to think of issue one what might be driving Nash’s actions and hallucinations, the obvious has now been taken out of the equation. Leaving only the question of who, and what, Nash’s stalker is really up to, and how they are enacting their duplicitous actions.

Final Thoughts:  A shocking twist along with some of Corona’s best and creepiest work on the title to date bring this one to the top of the pack. Defying a mystery that has been building since its inception, the issue reveals that things are not at all what they seemed. Especially if you think you have everything figured out.