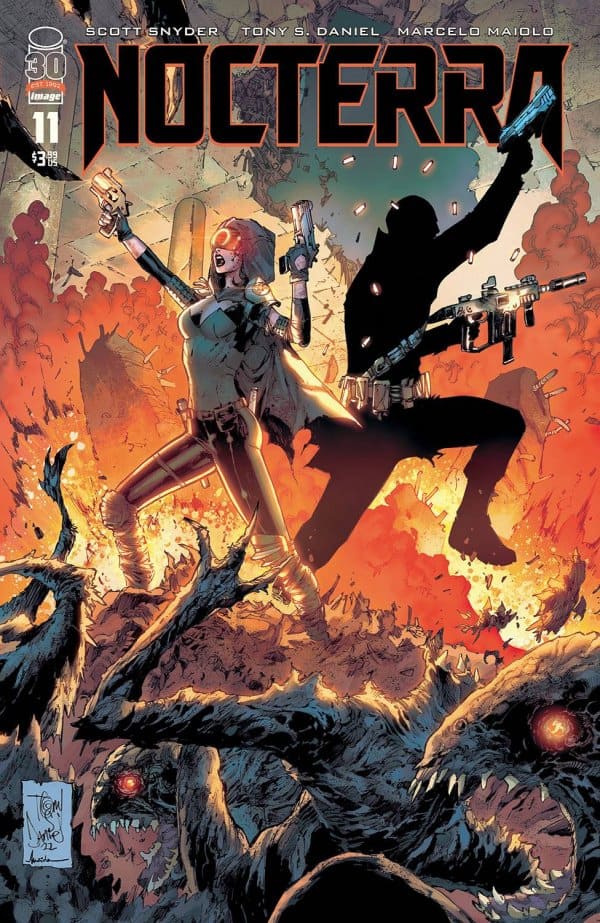 With nothing less than the fate of the world in the balance, Val and the Sundog Convoy face a terrible sacrifice. The quest for Eos reaches its shade-infested conclusion!

Last issue, Sundog Convoy and even Blacktop Bill found themselves in dire straits after their ill-fated journey to Luna.  Out of options, Piper shorted the power out on the complex and unleashed massive ocean-dwelling shades as the issue ended.  In this week’s Nocterra #11, Scott Snyder and Tony Daniel deal with the colossal implications of that decision while closing out the second arc of their collaboration to great effect.

The latest installment of Nocterra began with bedlam in the wake of Sundog Convoy’s daring infiltration of Luna.  Piper’s diversion meant that the mega shades were not the only ones dealing death, though, as Bill and his hilariously named foil William in particular racked up quite a few grisly kills.

When it seemed that Nocterra was fast running out of antagonists as the chaos ramped up, a not-so-shocking betrayal filled that role in a big way and seriously jeopardized the Convoy’s journey to Eos.  With the mega shades bearing down, and for the second straight issue, a major character made a difficult call to ensure that journey’s survival.

The major points of Nocterra #11 were the continued growth of Piper into the book’s main character, Blacktop Bill’s return to brutal violence after weeks as a de facto member of Sundog, and the conclusion of an action-packed second arc.  The continued roles of Val and Bill as the title moves on will be especially intriguing given some major twists over its 20-odd pages.

Tony Daniel is reliable as ever but did not quite hit all of his notes in an issue utterly crammed with action.  While gory violence suited the veteran artist well in the early goings, Val, Blacktop Bill, and William had all made for visually fascinating character designs before but were perhaps a bit rushed here.  Still, Daniel is one of the best in the business and should have plenty of room to show that in issue #12 if the story takes a breath.

Nocterra concludes its second arc on a high note wrought with violence, action, and new plot threads.  Snyder and Daniel have made themselves a compelling new comic book world to explore, and they will do just that as Sundog Convoy continues on toward its inevitable conflict with series big bad Nox.