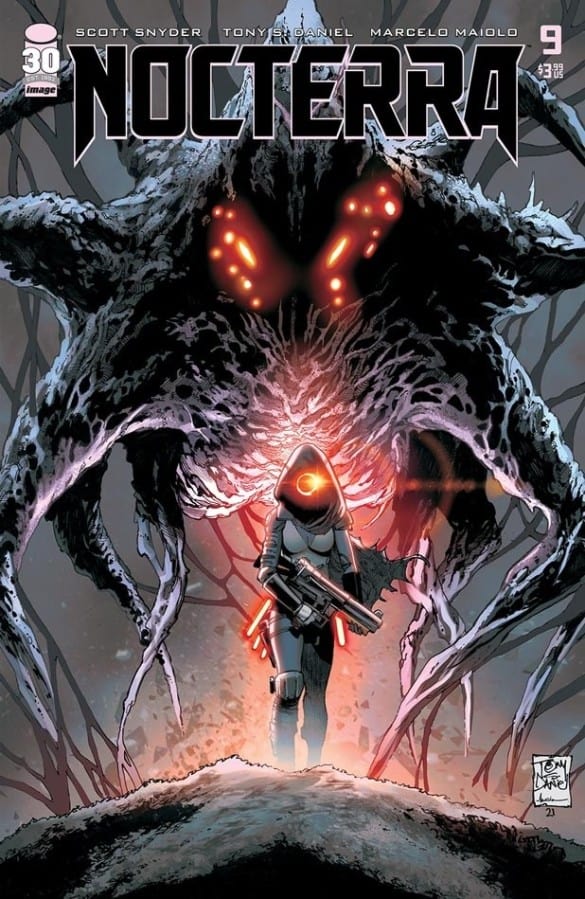 With a fresh member on their roster, Team Sundog must traverse uncharted waters with one question on all their minds: who, or rather, what is Eos?

Nocterra #8 came with some major revelations.  The issue unveiled a new big bad in Nox, the malevolent god of sorts looking to drag everything into the darkness.  Upon discovering this, Blacktop Bill offered to help Sundog Convoy reach Eos in the interest of self-preservation, but not before new antagonist William was introduced as the leader of the Nocturnes, Bill’s former outfit.  All of these new developments gave the creative team of writer Scott Snyder and artist Tony Daniel plenty to unpack in issue #9.

This installment of Nocterra begins with the shades defeated in time for some exposition from Blacktop Bill on the nature of Eos and the Nocturnes.  Bill warns that to his knowledge, Eos is hardly the heavenly paradise Em hallucinated earlier in the series and that the convoy will need to fight dirty to reach it.  He explains that the Nocturnes, a ruthless band of mercenaries now led by William, will do anything it takes to stop the group from getting there.  The rest of the issue delivers on Bill’s warning over the perilous nature of a journey to Eos.

This comic does not have the sweeping plot implications of Nocterra #8, focusing more on a character-driven narrative centered around Bill, the previous main antagonist, and Piper, the young lady he had doggedly pursued until only recently.  While Val, who has mostly taken a backseat to Piper as the main character during this arc, sees the usefulness of having Blacktop Bill captive, Piper struggles to relate the use of the heinous killer as an asset with the convoy’s end goal of a better world.  This ideological conflict is exacerbated by the shocking manner in which Bill dispatches the convoy’s pursuers later in the issue.

As per usual, Tony Daniel and the art team deliver, especially during the opening and closing action sequences.  Daniel’s art style has been essential to bringing this post-apocalyptic world to life, with the Nocturnes and human shades, in particular, providing memorable aesthetics.

Through eight issues, Nocterra has been chock full of the non-stop plot advancement one would expect from a road epic.  That character development was prioritized in issue #9 was a welcome change of pace, and proved that Snyder is just as adept at fleshing out characters as he is killing them off.  Blacktop Bill remains the series standout while Piper is an increasingly interesting secondary protagonist.