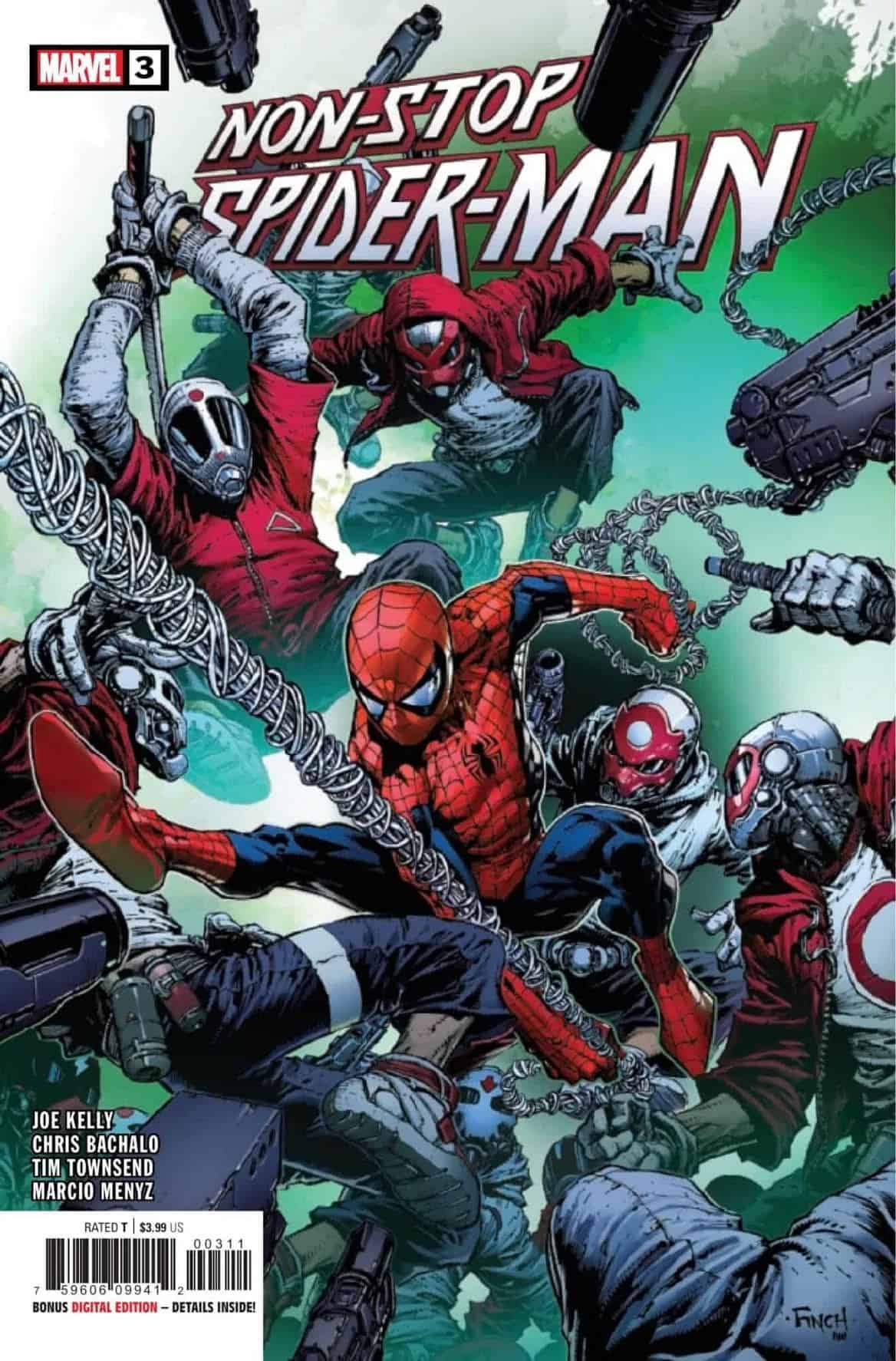 Something is happening to the brightest young minds in New York City, and Spider-Man has found himself in the middle of it. This story is going to show you a side of Peter Parker that neither you nor Peter thought existed. And neither of you will be able to handle it. 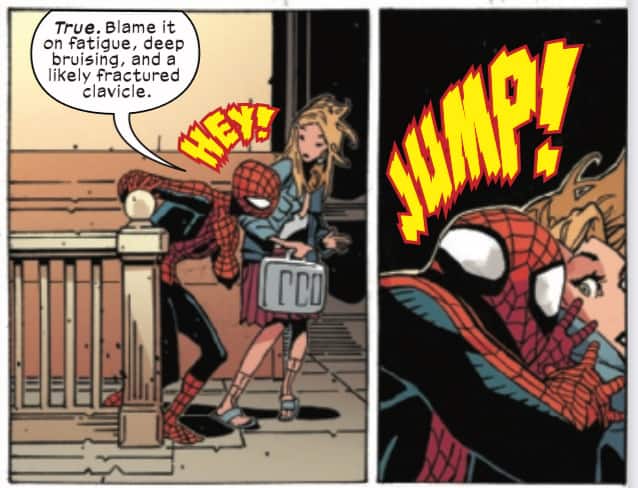 Chapter three of “The Big Brain Plan” and Pete and Norah (Winters) are on the run from the Zapata Bros., two lucha libre wrestlers with a penchant for spouting $10 words, as they race to get the drugs that are killing young immigrant kids, using it to get an edge. It’s basically a more dangerous form of Adderall. The chase takes us from sky scrapers to the subways, and everywhere in between. 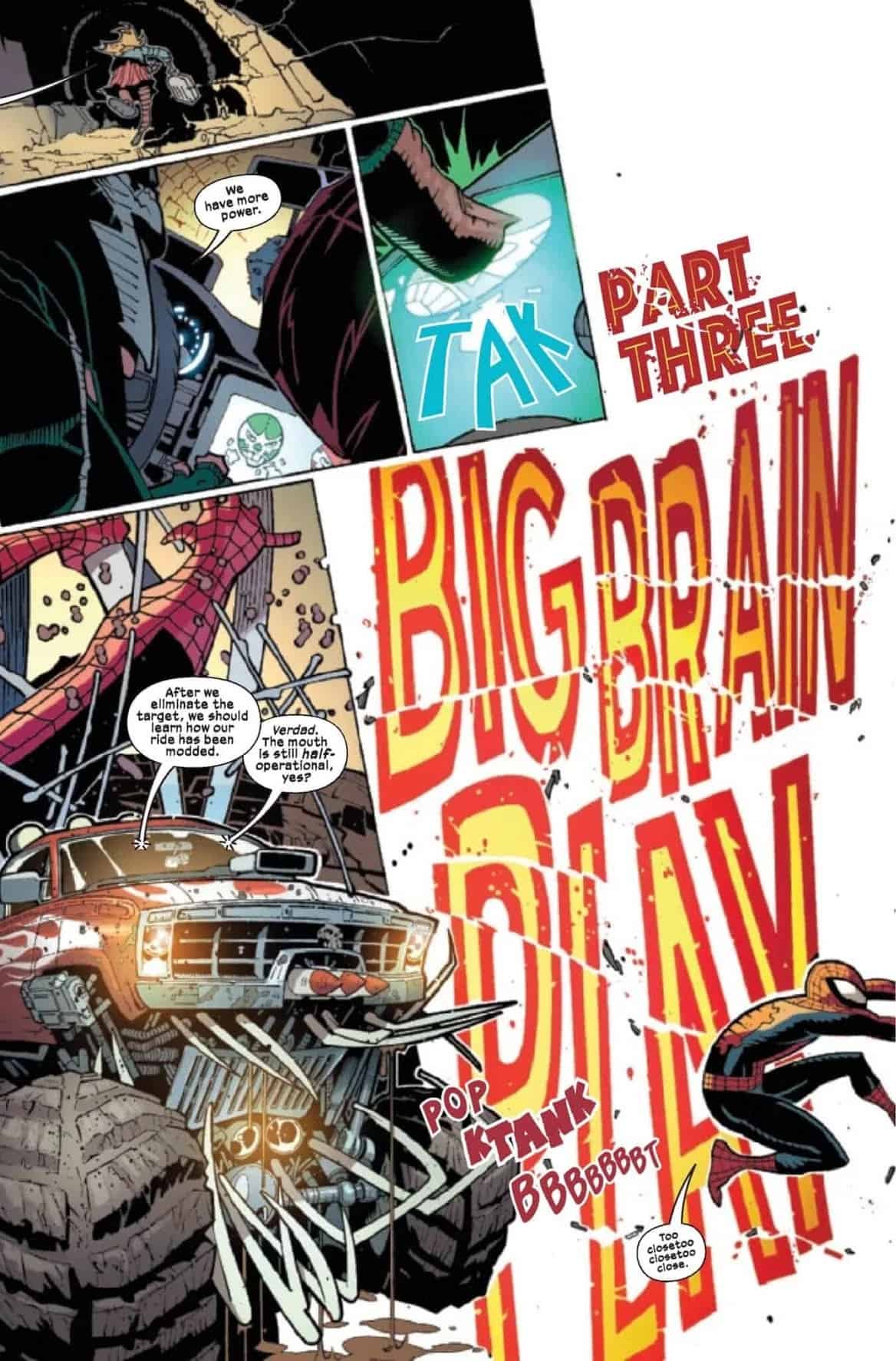 Joe Kelly and Chris Bachalo really try to live up to the title as literally as possible, and don’t give Spider-Man a chance to breathe, much less collect his thoughts on how to handle these two mercs with the Jack Black masks. The team’s use of blocky words for Spidey’s Spidey sense is actually quite brilliant. It feels like I’m reading a comic version of the Adam West Batman television show from the ’60s. It’s a take I’m kinda shocked no one else used until now. I hope this tactic finds its way to other Spider-Man related titles, because I’m a sucker for continuity. 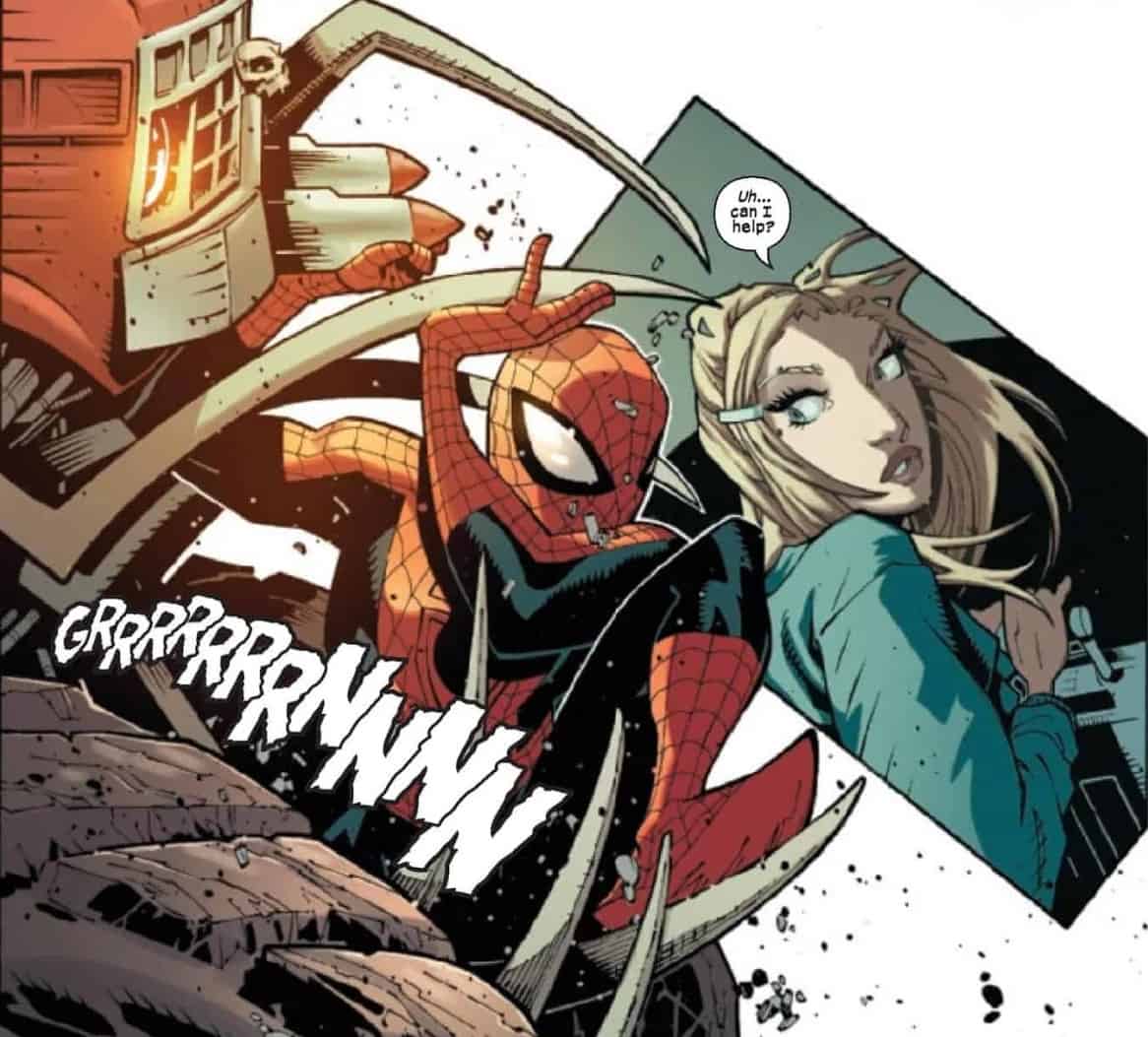 Kelly’s got a real knack for writing Spidey dialogue. It’s quippy, and light, and gives the readers a sense of excitement. I was a very big fan of Joe’s work during the BND era of writers by commission, with Dan Slott, Fred Van Lente, Mark Waid, and many more. He’s got a real handle on who Spidey is, and I’m very happy with that, because that hasn’t always been the case when it comes to the character.

Joe’s Norah is great too. She’s plucky, and independent. A very cool character who thrives under pressure. She almost reminds me of a more confident Deb Whitman. For newer fans, Deb was a love interest of Peter’s. They were teaching assistants together during their time at Empire State University, who was slowly being driven insane because she knew Peter was Spider-Man, but he kept denying it, and going out of his way to make her doubt herself. It was a pretty unhealthy, toxic relationship Pete had with her, and with Peter’s track record, that’s saying something.

Joe’s joined by his former Amazing Spider-Man, Steampunk, and world renowned X-Men alum, Chris Bachalo, and they’re a very compatible duo. Bachalo’s style screams energy, motion, and confusion, which with the pace of this story, is very spot on. Bachalo is a very polarizing artist, either you love him, or you don’t. Luckily I love him. I’ve been a fan of the artist since his days on Vertigo’s Shade: The Changing Man, and while his style is very different from what it was thirty (!) years ago, it’s still something that’s fresh, relevant, and different from a lot of styles on the shelves today.

The team of Joe and Chris is a match made in heaven. Joe definitely knows how to write for an artist of Chris’s caliber, and how to play up to his strengths, which is always a bonus with any creative team, so Marvel definitely has a winner on their hands. The biggest disappointment was how little actually happened here, and how confusing some of Bachalo’s panels were, making some of the scenes just a tad bit messy and hard to read, but in the context of this whole issue just taking place at a breakneck speed, it makes sense. If this is his technique with every storyline that might get a tad tedious, but we’ll just have to wait to see.

We get one of the most action packed comics on the stands, where we have Spider-Man and Norah Winters are trying to figure out who's killing these kids with this intelligence enhancing super drug, while on the run from a pair of luchador’s. It’s loads of fun, and high octane, but a little light on plot.