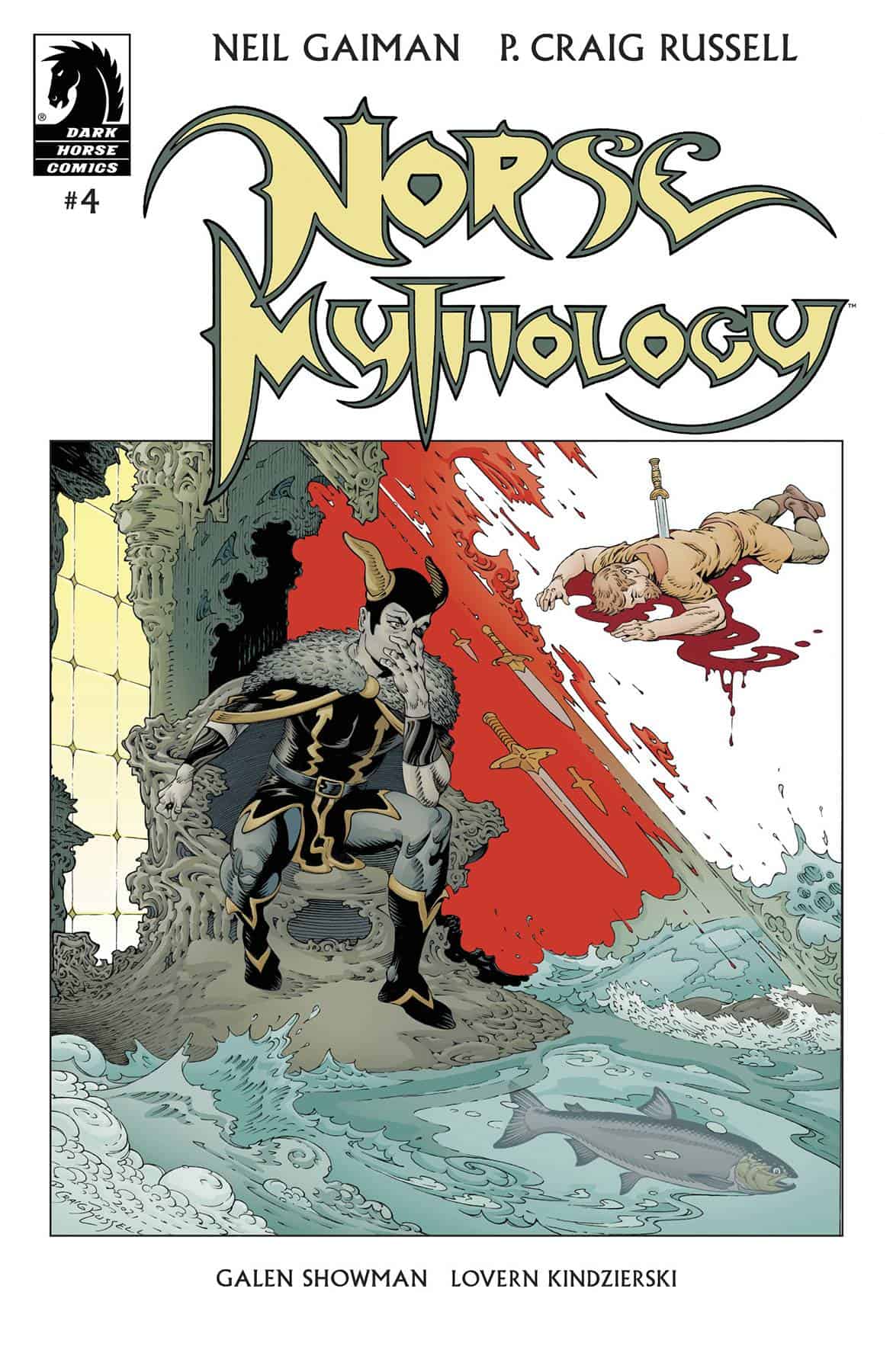 In The Last Days of Loki, artist Galen Showman illustrates the tale of Loki, his banishment from the throne of the gods, and his final fate.

Adaptation (retelling a story from one medium in another) isn’t a dirty word. It’s simply a tool allowing writers and artists to introduce their audience to a pre-existing story or characters while offering new perspectives on the source material. Dark Horse’s comic series Norse Mythology is an adaptation of Neil Gaiman’s book of the same name, but unlike most adaptations, it exists at the end of a long game of telephone. P. Craig Russell’s comic script adapts Gaiman’s retelling, but Gaiman himself is adapting English translations of the Poetic and Prose Eddas (Norse sacred texts), which were in turn written by medieval Christians retelling pagan oral literature. The result of telephone, as anyone who has played can tell you, is that vital words and information inevitably get lost along the way. Norse Mythology’s 14th  issue, “The Last Days of Loki,” makes the casualties of this telephone game evident. 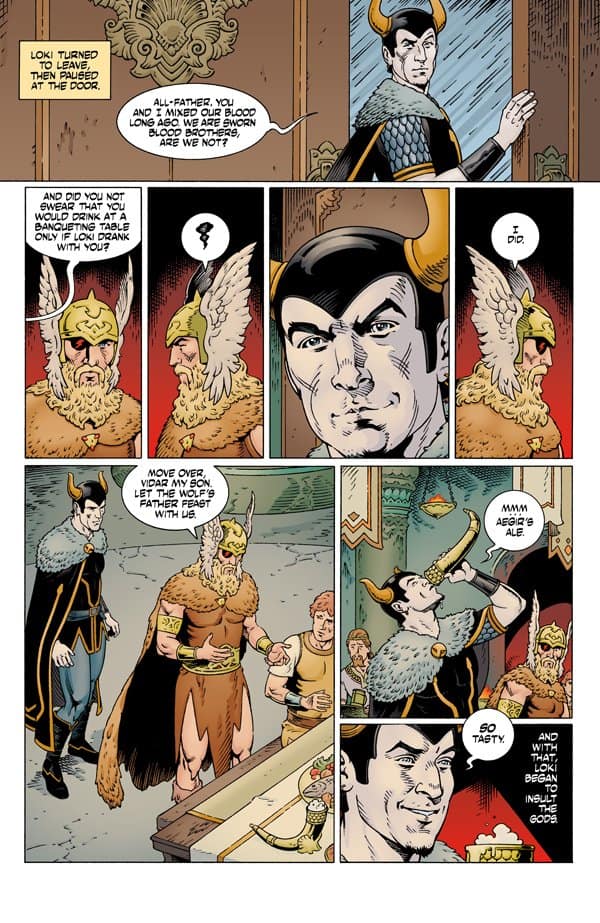 While Gaiman combined a discrete series of stories and poems into an accessible and linear narrative, he abridged multiple stories and cut others entirely along the way.  Left with the difficult task of cramming Gaiman’s book chapters into 30-page comic issues, P. Craig Russell cuts the myths even further, exacerbating Gaiman’s choppy pacing and transitions. And while Gaiman is often a humorous storyteller, this particular issue lacks both his humor and the myths’ own humor and cultural context. For example, take the the comic’s version of “Lokasenna” (“The Flyting of Loki”). The Old Norse equivalent of a roast battle, “Lokasenna” is a runchy, humorous battle of wits as Loki calls out the hypocrisy of the gods. But while the book and comic throw out traditional thees and thous, they also throw out most everything else of note. Gone are Loki’s jabs about having sex with Tyr’s wife, Freyja farting in bed with her brother, and Odin using the same “womanly” magic he chastises Loki for. In Gaiman’s version, he simply calls the goddesses “silly sluts” and tells the gods that he hasn’t forgotten their “wicked deeds.” Gaiman’s abridgment erases the original text’s humor, biases, and complexity, which in turn constrains Russell’s script. 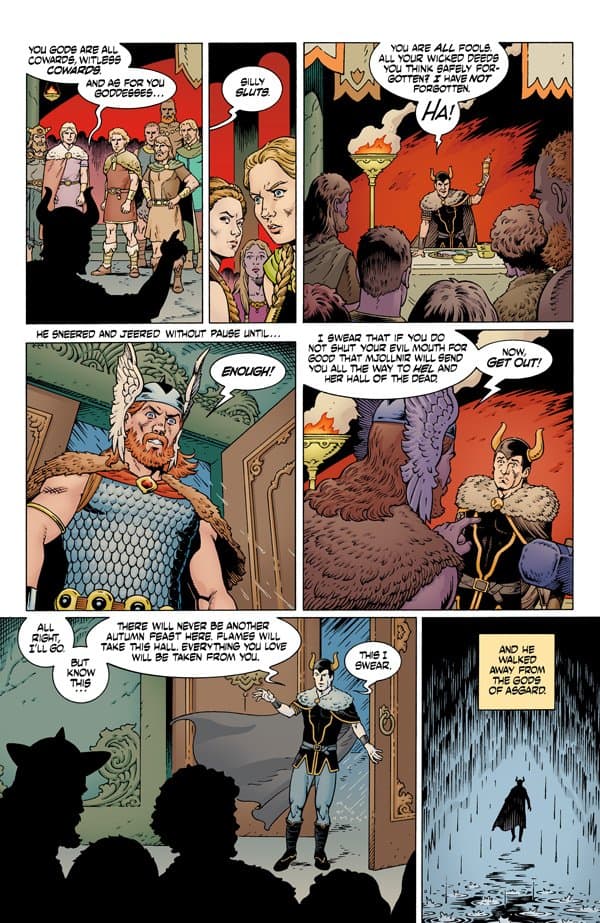 Of course, visual adaptations like comics and film offer artists ample opportunity to incorporate additional contexts, themes, and general nuance through image. Galen Showman is a skilled artist — as are the many artists working on previous issues (including P. Craig Russell). He draws faces expressively and renders several panels depicting Loki as a salmon beautifully. Yet, Norse Mythology’s artwork as a whole continues to pile historical anachronisms one on top of another, whether it’s the gods continuing to wear horned and winged helmets or Showman referencing a medieval Christian stave church instead of a Viking Age dwelling when drawing Loki’s house. While its name may suggest an authoritative take on classic myths, Norse Mythology isn’t terribly Norse. Instead, it reiterates widely held motifs of the Viking Age as envisioned by 19th century illustrators, operas, and pop culture.

At its heart, Norse Mythology has neither The Mighty Thor’s whimsy and disregard for the source material nor the grounded and well-researched realism of the Viking-centric series Northlanders. This strange lack of direction is only emphasized by Lovern Kindzierski’s desaturated and realistic coloring. Rather than make the gods feel human and grounded, they seem only to emphasize how the comic neither fully edifies nor entertains while valiantly attempting to do both. That said, for an audience whose only exposure to Norse myths may be Marvel’s movie or a Rick Riordan book, this is a decent starting place.

Norse Mythology III #4 admirably attempts to make a thousand year old literary tradition accessible to a new audience. Regrettably, it leaves both history and nuance on the cutting room floor.