Not All Robots #2: A Fine Line Between Hope and Delusion 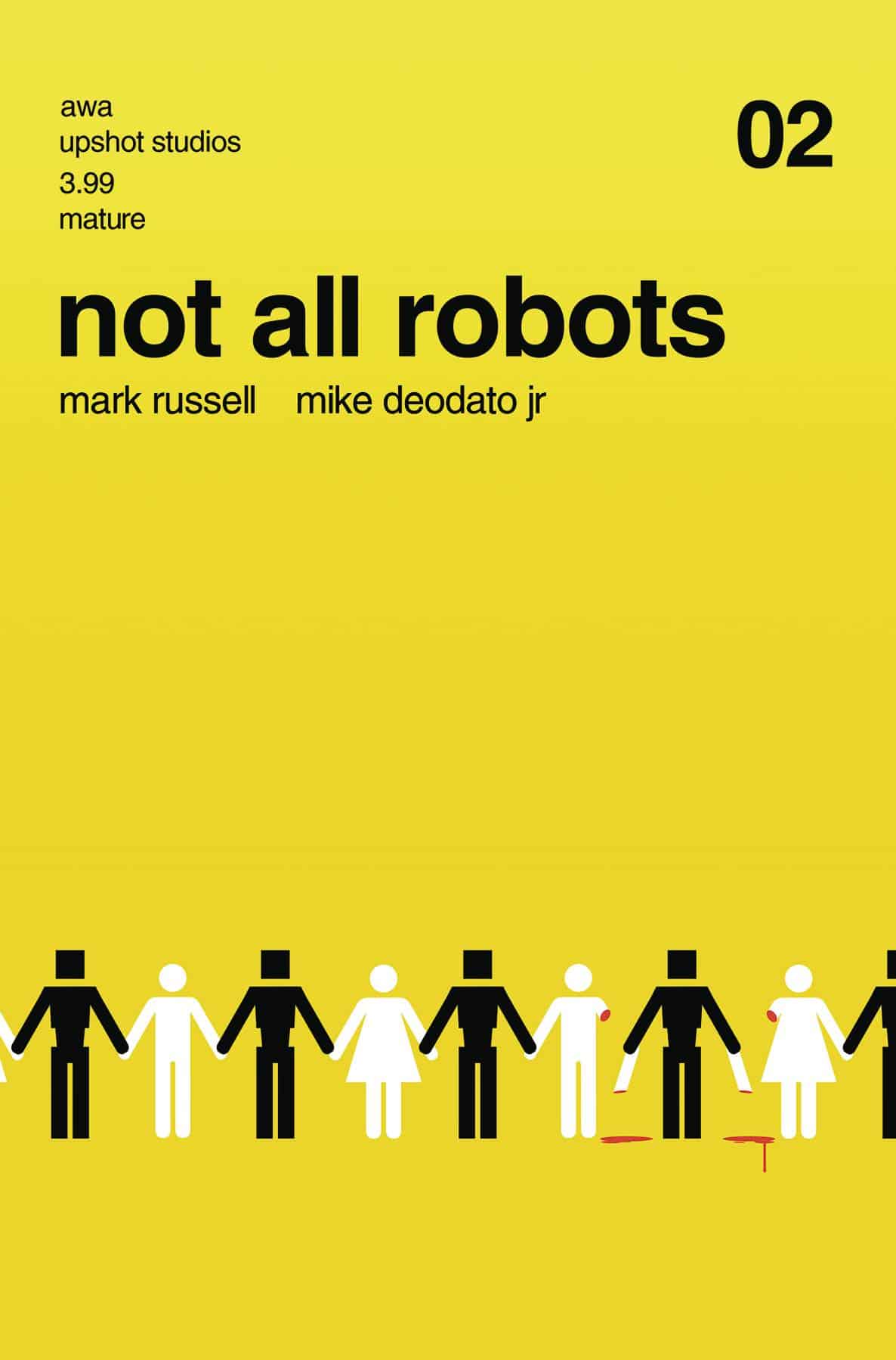 In the year 2056, robots have made human life so easy, so task- and worry-free, that they've basically become pets. Robots run it all. Do it all. But for what?

Not All Robots is the story of what happens when some robots decide they've had enough mollycoddling humans and their weaknesses. There's a whiff of revolution in the air...

Mark Russell is at it again, bringing his trademark harrowing, incisive social critique and black humor up against the very notion of toxic masculinity, in this harrowing allegory for the zeitgeist!

First off, a bit of a clarifier thanks to our dear friend Wikipedia:

#NotAllMen is an expression commonly used as rebuttal to generalized statements and prejudice.[1][2] It is also a feminist Internet meme.[3][4] A shortened hashtag version of the phrase not all men are like that,[5] it is sometimes abbreviated NAMALT.

A Time magazine article on the subject states that “Not all men” was previously stated as an object of frustration, but in early 2014 it became usually used as an object of mockery. Intended to counter generalizations about men’s behavior, some critics claim the phrase deflects conversations from uncomfortable topics, such as sexual assault.[6][7]

“Not all men” has been around for more than a few years, but in the post- MeToo era, it’s practically become a rallying cry (emphasis on cry) for toxic, cavemanesque men to justify their sexist, backwards behavior toward women. The irony of course is that the men who like to cry “not all men are like that!” the loudest usually go on to provide the greatest examples of why they are exactly like that, to their own obliviousness. These tone-deaf man-children just want these dang uppity wimmen and lib’rals to understand, dangit, that not all men are like… that.

And so it goes.

The essence of the goon is to be so thick-headed that they do not understand that, much less why, they are a goon. “Those ladies shouldn’t wear those clothes if they don’t want me to stare at their boobies!” is a common mindset. Well, no, maybe you just shouldn’t leer at them and let them otherwise have the freedom to express themselves sartorially however they see fit without the unwanted side effect of your eyeballs being glued to their asses.

But I digress. What does any of this have to do with Not All Robots? Enter comics’ master social satirist Mark Russell (Billionaire Island, The Flintstones, Second Coming), with his latest brilliant skewering of something or other that’s a societal ill. Taking on the NotAllMen hashtag and the army of testosterone behind it, Russell has devised a wonderfully clever not-too-distant future where robots do everything for people: all the work, all the chores, all the thinking. Every conceivable job has been replaced by robots (except for hairdressers and a few other choice employment pathways) to the point that the robots are waking up to the fact that, hey, maybe these fleshy, flawed, overly emotional humans are just a tad obsolete. Why on earth should they toil away for them when they’re just going to die anyway, amirite?

The brilliance with which Russell paints this dystopian future lies in the fact that it’s so sadly plausible. Not only have humans willingly given up most of their freedom and self-determination in the pursuit of ever-increasingly torporous lives, a majority of them are so inured to it that they are oblivious to that fact. Donny Walker is one of those humans, all too happy to speak up in defense of his family’s robot servant, Razorball, even though it’s quite obvious Razorball loathes serving all of them. (“I just don’t understand why Dad doesn’t get it,” son Sven scoffs, to which daughter Cora retorts, “…He listens to Bot News… all day long! It’s like we have two robots in the house.” Yes, “Bot News” is a thinly-veiled counterpart for that “news” channel.)

The major plot twist last issue, after setting up all of these organic dynamics, was that a small group of robots, finally fed up with serving their humans, gassed and killed 200,000 people in Orlando, making it look like an accident. With that, the fuse was lit, and the pro-robot robot faction, the pro-robot human faction, and the pro-human human underground were set on a massive collision course.

So, how does Not All Robots work as an analogy for NotAllMen? Interpretations may vary by degrees, but it’s pretty obvious that the robots, with all their bad behavior yet easy-to-swallow cool, are Russell’s analogy for neckbearded muscle-brained menfolken. Heck, there’s probably a bit more to it than even the obvious, as historically, robots aren’t exactly known for their independent thought. That’s the obvious part, though — once Russell gets over the setup and establishes the major themes and plot points, there’s a lot more to Not All Robots than just being a superficial takedown of men behaving badly. There’s also a look at the enablers, the apologists, and the ones fierce enough to stand up and say, “No more.” The only real shame here is that there are only five issues to this series, and the conceit is thick enough to easily support an ongoing (if finite) series.

Mike Deodato Jr. has swiftly become AWA’s go-to artist for its more elite projects. After a quarter-century working exclusively for Marvel, Deodato Jr. has in the past decade or so truly come into his own as an artist and become one of the finest exemplars of his (or any) generation of creatives. His page layouts are immaculate, piecing together stray images alongside fully-realized panels to create a more fully-realized art canvas per page. His attention to detail is second to none; an historical perspective shows him starting his career as a student in the Jim Lee mold but now has far surpassed his old mentor in his range of details, subtleties, and craft. Deodato Jr. knows how to take a six-panel page and turn it into a fully-realized work of art from corner to corner in its own right. Few other artists in the annals of history have looked at individual pages that way, but the list is pretty short: Eisner, Kirby, Sienkiewicz, McKean, Steranko, a few others. Deodato absolutely deserves to be mentioned alongside those masters.

Fortunately, Deodato has Lee Loughridge alongside him, a colorist who knows a thing or two about a thing or two. Loughridge has been around for quite some time, and has equally mastered his craft in such a way that there could probably be no finer partner with whom Deodato could partner. Same goes for Steve Wands, who gets to have fun working with fonts for the robots’ dialogue that have to at once convey cold binary logic but balanced with a hint of humanity. Together, these three masters of their craft – Deodato, Loughridge, and Wands – are a triple threat to any comic they should be working on. My only real complaint is that, due to either Deodato’s inking or Loughridge’s muted color palette choices or some combination of the two, sometimes it’s difficult to tell the individual robots apart. That might well be a side effect of the fact that they’re robots, and thus the challenge falls to Deodato to render them in convincing and distinct ways. This is no minor thing, because not only is Deodato being asked to differentiate between all the various robots, he also has to find ways to show them having emotion without the benefit of facial expressions. But, miraculously, he pulls it off.

Don't miss Not All Robots #2. Heck, go back and buy the first issue, too. This is a comic that deserves your hard-earned money.

Not All Robots #2: A Fine Line Between Hope and Delusion