Nubia & The Amazons #2: Snake in the Grass 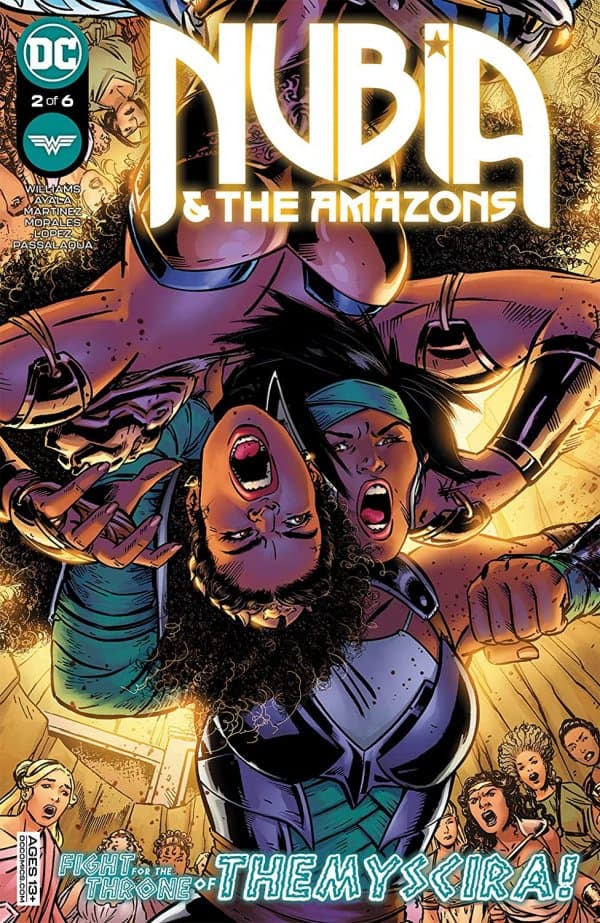 The unrest surrounding Nubia’s ascension is rising fast! The politics of her new role and responsibilities as guardian of Doom’s Doorway have led to rumblings that she isn’t quite ready to lead. How can she prove her worthiness? As any monarch on Paradise Island would…an Amazon fight club!

When it comes to Wonder Woman’s corner of the DC Universe, there’s a handful of Amazons that are used with any sort of consistency: Hippolyta, Philippus, Artemis and Mala. But in Nubia and the Amazons, we get several Amazons each given characterization regardless of how much or little page-time is devoted to them. It’s something we Wonder Woman fans have been begging DC Comics for a long time, and I couldn’t be more thankful that they are spotlighting these amazing women.

At the forefront is Nubia, of course. Last issue, I delved deep into my love for the character, but it continues growing in this second issue. Any panel that Nubia appears in is breathtaking with her gorgeous curls and queenly fashion. Alitha Martinez does such a phenomenal job drawing this character that I just don’t want it to ever end.

Nubia’s relationships are further explored here, as well, with her romantic interest being revealed to be Io the blacksmith. I’m fond of Io from Greg Rucka’s Wonder Woman run, but I do wish Martinez drew her to be more muscular. We also get more of Nubia and Philippus, a friendship that is easily becoming one of the Wonderverse’s best. These two joke with each other, something Philippus isn’t really known for doing. Seeing Nubia pull that side out of the stern general is a treasure.

The Gods are a vital part of Wonder Woman’s lore, so it’s very nice seeing Athena, Aphrodite and Hestia provide guidance to Nubia. Hestia, in particular, is someone scarcely seen throughout Wonder Woman’s 80 years, so I love that Stephanie Williams and Vita Ayala thought to include her.

We also get some insight into the Well of Souls, with Andromeda sensing familiarity with Nubia despite only just meeting her not long ago. I hope we get to see the other newcomers’ backstories. Bia, the first confirmed trans Amazon, has quickly stolen many of our hearts. I’d love to see this mini-series explore her background.

Lastly, there’s the matter of a certain villain slithering amongst the Amazons. That’s right, it seems as though Medusa is coming back in a big way, and I couldn’t be more thrilled. Every time Medusa has appeared in the Wonder Woman title, something big happens. I’ve always put Medusa easily in Wonder Woman’s Top 10 adversaries, and I have confidence that this story arc won’t let me down. However, part of me feels as though the creature inhabiting various Amazons may not be Medusa at all, but someone like Decay or even one of her sisters Euryale or Stheno. I’d love to be surprised, but I’d be completely happy if it was indeed just Medusa orchestrating a Doom’s Doorway jailbreak.

This mini-series is the best thing to happen to the Amazons of Themyscira in decades. Gone are the days of Amazons Attack! This prelude to Trial of the Amazons has filled me with hope and confidence for the creative team to bring their A-game to the upcoming Wonder Woman event.

Nubia & The Amazons #2: Snake in the Grass