Nubia & The Amazons #4: So Much Fire In Your Hello 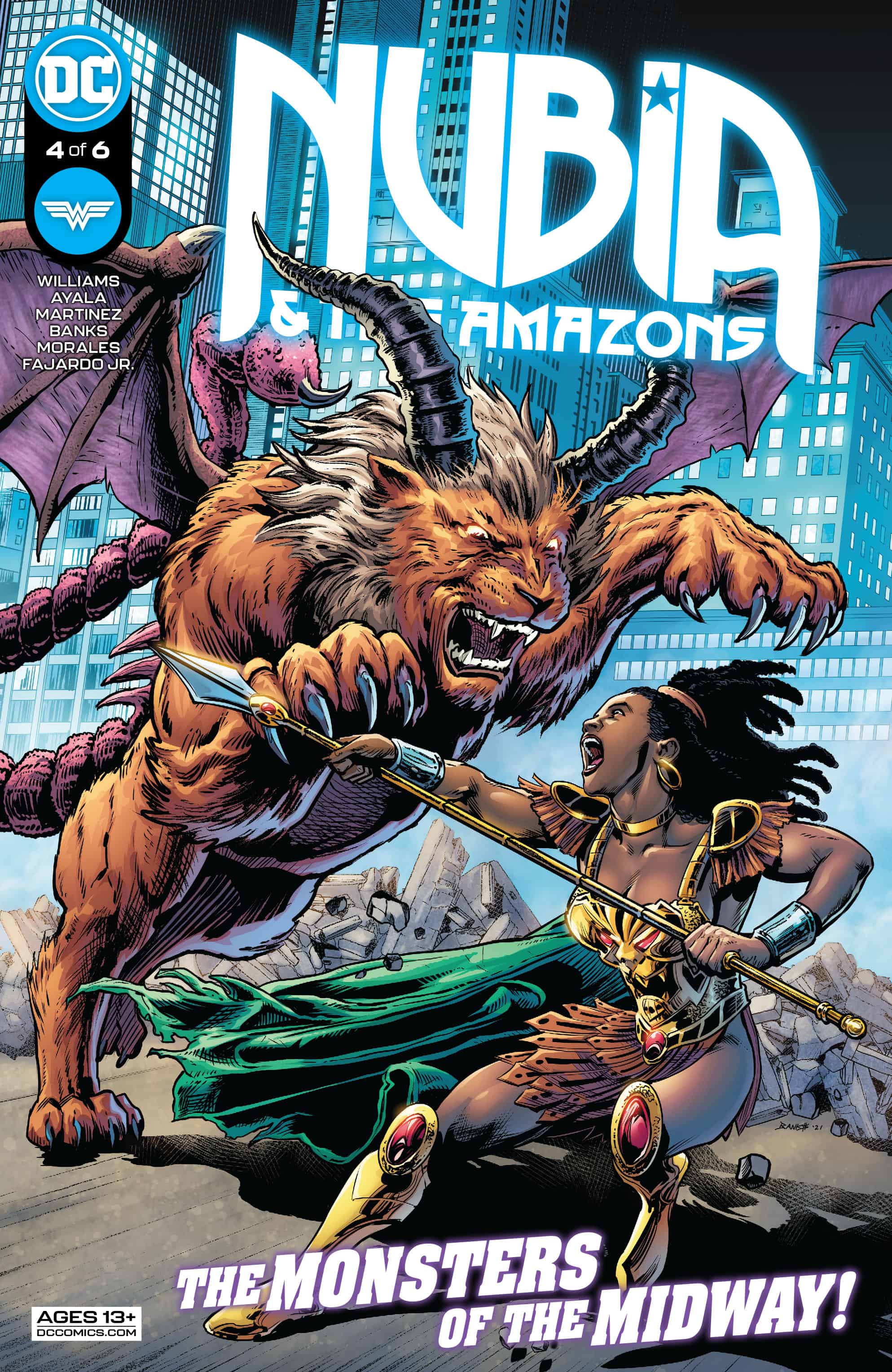 Andromeda has gone from most talented to most wanted! Concerned about her sister, Nubia leads the charge. What evil from Tartarus has found its way into the very soul of Doom’s Doorway’s latest champion? To find out, our queen will have to delve deep into her haunted past for clues. Can she heal herself from old wounds in time to save another from making the same mistakes? Find out in another exciting chapter of Nubia’s solo adventures!

There’s dissension brewing on Themyscira, and each Amazon seems to be taking sides. But while we get glimpses into several different Amazons’ perspectives (including Castalia and Areto, creations fo Greg Rucka from DC Rebirth who haven’t been seen since the writer left the series!), this issue is almost purely Nubia.

Throughout the issue, we’re given glimpses into Nubia’s history with Andromeda (then, schoolteacher Ms. Knight). These 70’s-inspired flashbacks hearken back to Nubia’s first appearances from the era even though her costume is from the early 2000’s. I would’ve loved to see her classic silver armor, but I understand why they went for the more lion-like “Guardian of Doom’s Doorway” design. There’s a fantastic moment of action with Nubia against a manticore, and I love when Wonder Woman incorporates mythical monsters into the stories. So often we are just given the gods, but there’s leagues of fantastical creatures that could make for fun action scenes.

We also discover that Nubia and Ms. Knight began a romantic relationship. I can’t emphasize enough how wonderful it is to see two queer women of color flirting with each other. Their attraction is perfectly captured here, with moments like Ms. Knight twirling her hair really standing out. 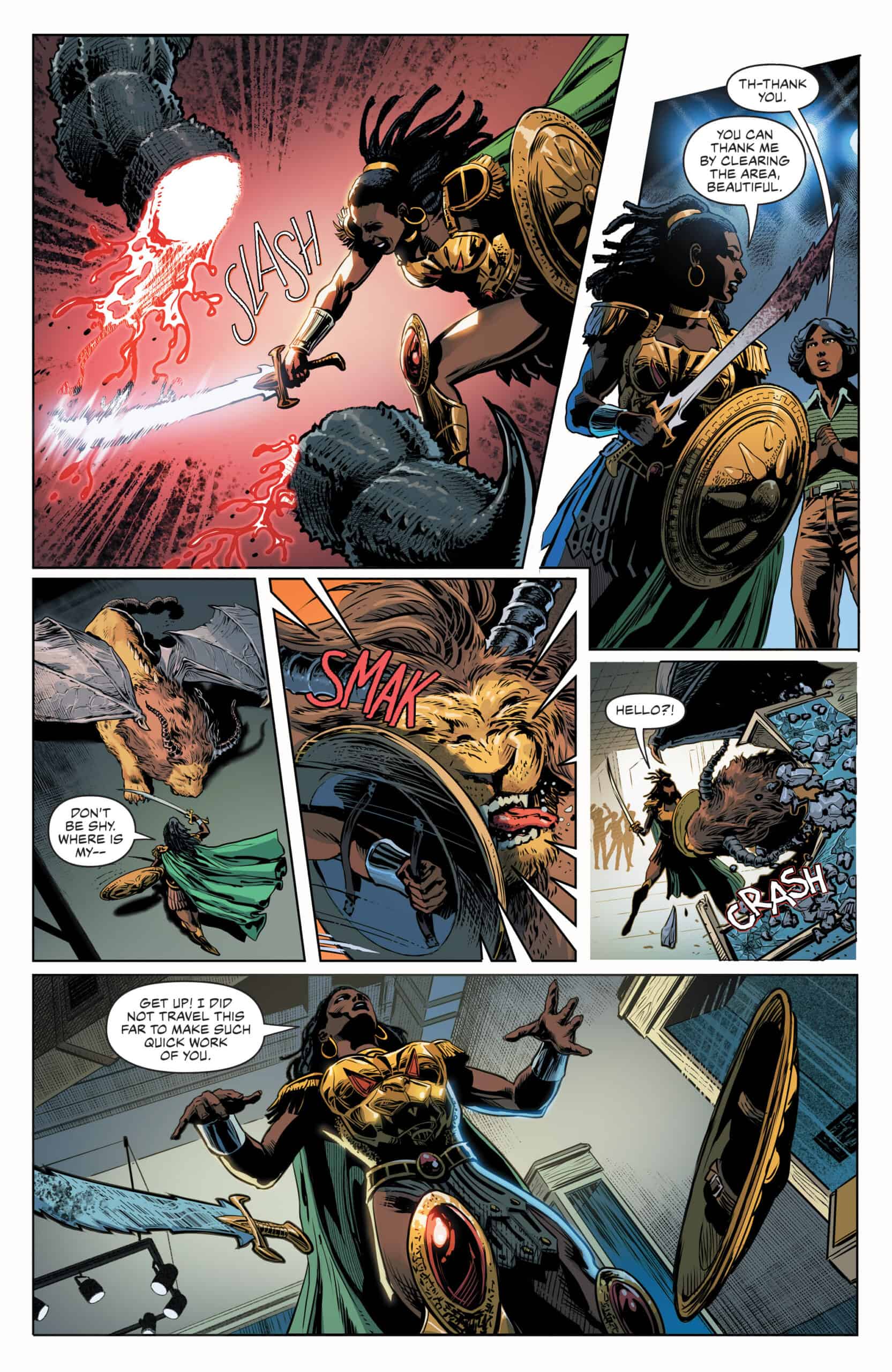 Back on Themyscira, Bia (still my favorite of the new Amazons, though Andromeda is quickly rising) returns the focus to Medusa, our big bad for the mini-series. I was so pleased to see the writers bringing up that Medusa is a sympathetic figure, a woman “harmed in unimaginable ways”. Too often do writers bring Medusa in and have her completely beyond redemption, a serpentine menace who usually ends up headless or turned to stone by the end of the story. Here, we see Bia plant the seeds of compassion in Nubia. Perhaps even Medusa has a place on Paradise Island.

We get more Nubia vs. Monsters later in the issue, including harpies. One criticism I have of this story is that it seems like Nubia kills one of the harpies during their battle. I was a little surprised to see that when there were large parts of the issue dedicated to the idea that Medusa isn’t just a monster. But perhaps that harpy is still flying around trapped in Doom’s Doorway (perhaps a fate worse than death?). Whatevs, they looked fabulous at least.

The art is beautiful as always, but there’s one shot of Nubia that really stood out to me. As Nubia leaves Ms. Knight, there’s a closeup of Nubia’s teary-eyed face that just immediately took my breath away.

Nubia & The Amazons #4 is perhaps the best chapter of the mini-series yet, with gorgeous art and a powerful message of compassion and forgiveness. What more could you ask from a Wonder Woman tie-in?

Nubia & The Amazons #4: So Much Fire In Your Hello