Nubia & The Amazons #6: Goodbye Until We Say Hello Again 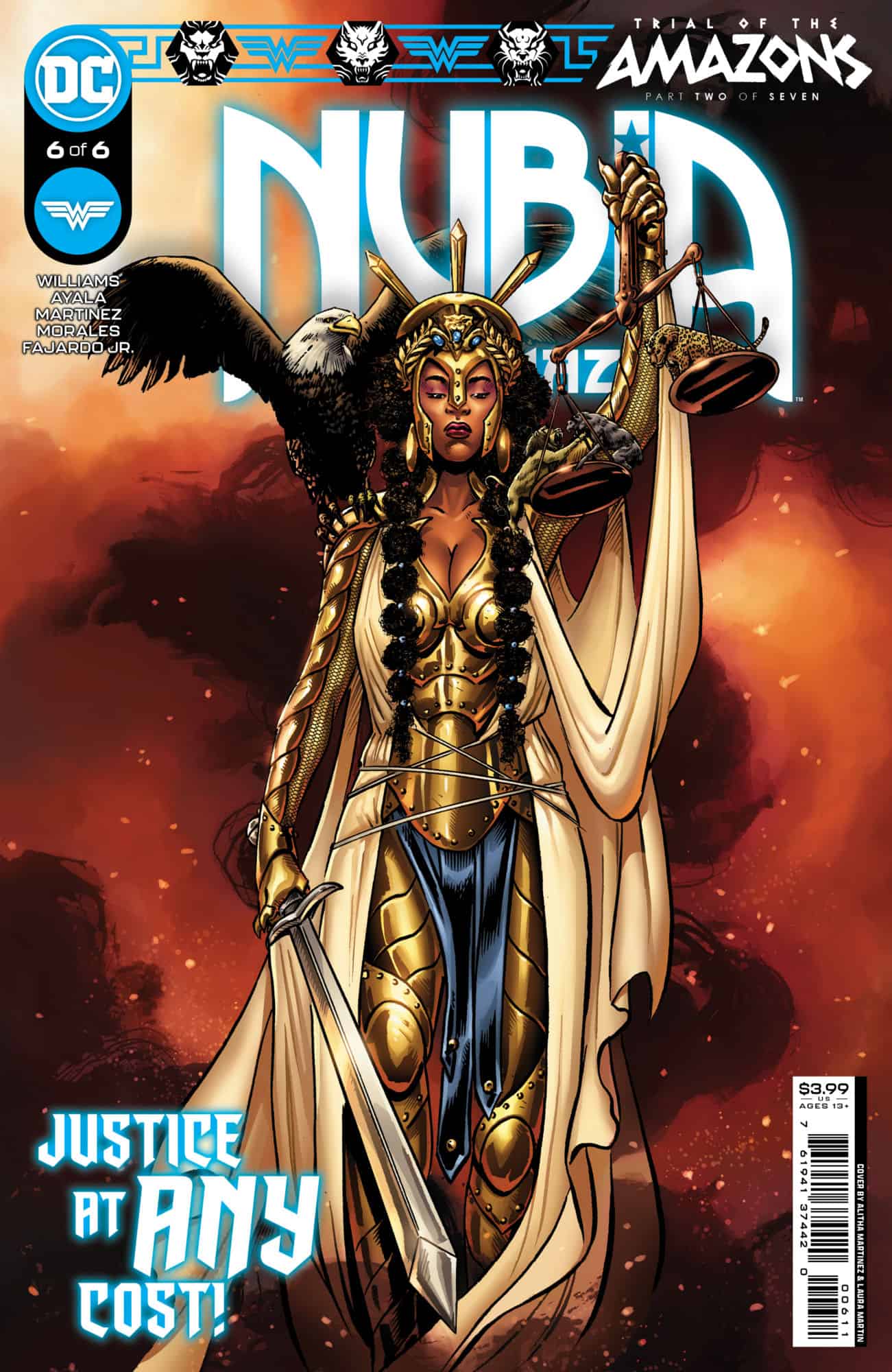 “Trial of the Amazons” part two! There’s been a murder on Themyscira, and the killer is still on the loose! Now it’s up to Nubia to play diplomat and detective as the other Amazon tribes are called in for questioning. Can she keep the peace long enough for the Contest to happen? She must, because Doom’s Doorway stands unguarded until a new champion is found!

Warning! Spoilers for Trial of the Amazons #1 ahead!

This is history in the making, folks! Never before in comics has their been an event of this caliber featuring an entirely female cast of characters. I’m ecstatic to see this happening and to see the faith DC has in the Wonder Woman brand. This issue marks the end of the Nubia & The Amazons mini-series, but Nubia isn’t going anywhere. 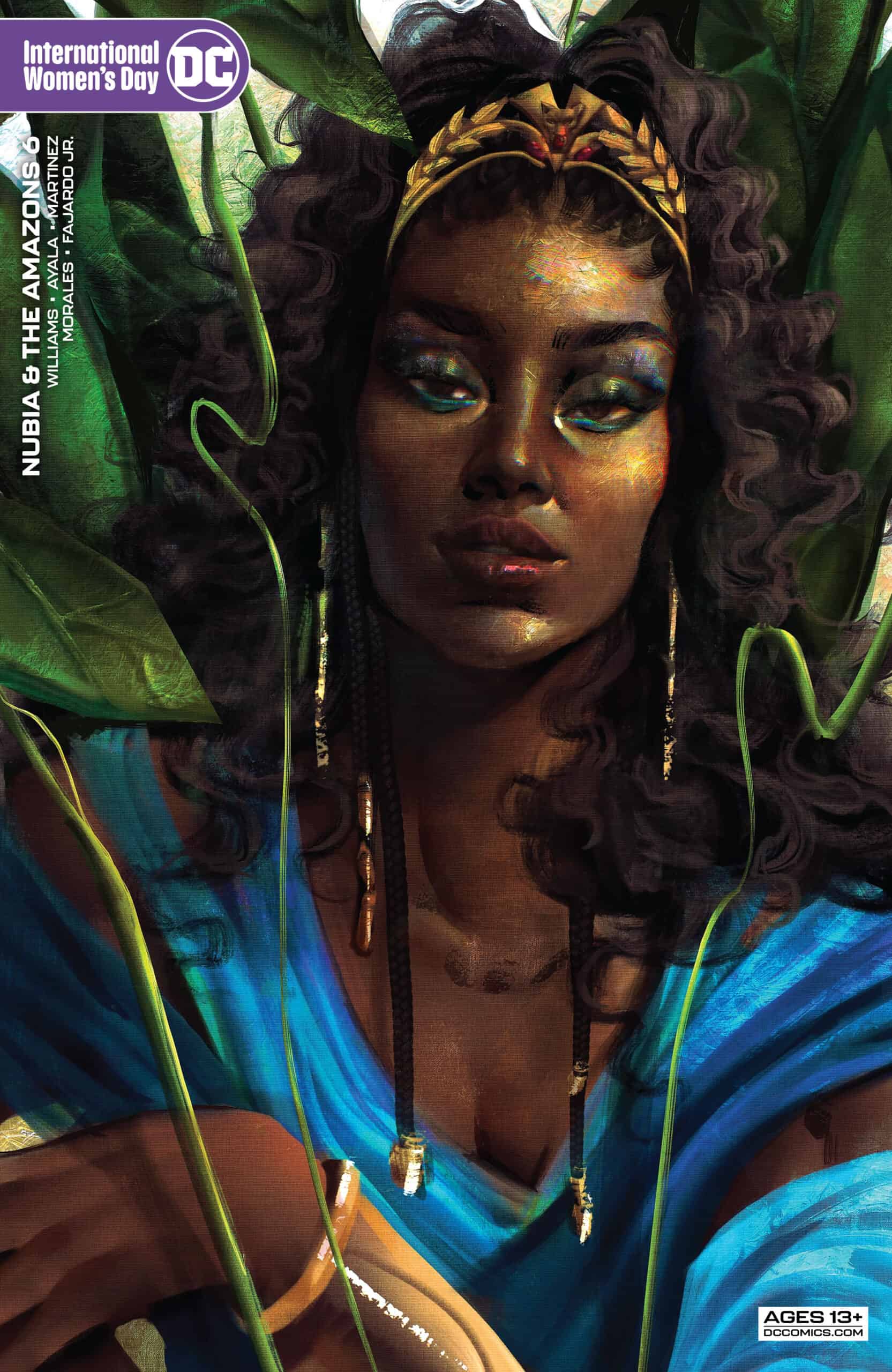 Unfortunately, the victim is once again Diana’s mother Queen Hippolyta. Hippolyta has a poor track record in terms of survival, having been killed around a dozen times over Wonder Woman’s 80+ year history. I can’t say that I’m surprised personally, and it does make the most sense if the event has to kill off someone for it to be her. It’s still a shame, though, and when I first saw the end of Trial of the Amazons #1, I rolled my eyes. However, this issue handled the mourning of all of the characters very well. Nubia, Diana, Philippus, Faruka, Medusa, even Cassie Sandsmark gets a moment to show her grief. Cassie and Donna have never really popped to me as characters, but I hope their fans can take some joy from their use in this event.

There’s a cute moment with Doom’s Doorway where a black cat named Nyx startles Io. I’m a cat lover, so I enjoyed it, but as a continuity nut I sort of wish they used Galenthias as the name for the cat. It would’ve been a great nod to the poorly-received Odyssey storyline where Diana was rebooted for the 100th time, but this time had a talking black cat! I’m not surprised that DC doesn’t want to acknowledge that train-wreck though.

The story does a fantastic job capturing each character’s response to Hippolyta’s death, and in twenty-two pages I felt that each of the main Amazons (and even some minor ones) were given their spotlight. I really appreciate this aspect of the event since there are so many characters it can be hard to keep all of them at the forefront. Alitha Martinez continues to blow me away with her pencils, giving each character a distinctive look (on that note, Faruka’s design is truly breathtaking here). I won’t even complain about the lack of muscles on Io this time around! I hope to see more Nubia art by Martinez for years to come.

For the second part of the Wonder Woman event, Nubia & The Amazons #6 is a wholly satisfying end to the mini-series and early continuation of the Trials of the Amazons. I'm very excited to see more Nubia stories throughout 2022 and beyond, hopefully with this creative team.

Nubia & The Amazons #6: Goodbye Until We Say Hello Again