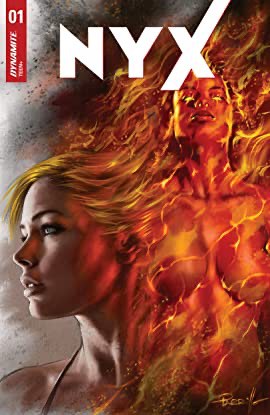 Nyx, daughter of a human and the mad god Chaos himself! Nyx's mortal side has been growing stronger, troubling her with all-too human emotions. Fortunately (for her), there's still the side of her that transforms into a demon of living flame...and requires her to feed on the life force of living beings to survive.

Can a half-demon find her place in our world...happiness...even love? Probably not, as she’s about to get dragged into her dad’s workplace problem.

The art in Nyx is fantastic, particularly on the design, color and look of Nyx herself. In her human form, she is a gorgeous looking normal blonde with blue eyes, while in her demonic form she is a shapely almost reptilian creature with dreadlocks. Most striking is her color, as she is various shades of yellows to oranges with a bright yellow halo around her body that exudes power and danger. It is not hard to be terrified of this creature while her human form exudes a vulnerability that is particularly shown in the final panels of this bloody comic.

The art’s greatness does not stop with Nyx, as all the characters, whether demonic or human, are top notch design. Many of the pages could be and are top notch art pieces of their own with the detail, coloration and shading, as the whole issue is a feast for the eyes.

Story wise, I like that this issue does not overly rely on Vampirella.  Sure it will be nice to see the vampire of Draculon make an appearance from time to time but this is not her story it is the story of Nyx.  Nyx was introduced in the Sacred Six story and arc involving Vampirella and there are some call backs to that story involving Nyx but this issue is a standalone for this character.  While Vampirella is the story of an alien trying to access her humanity, Nyx is the story of a half human, half demon trying to survive while not losing her her amity in the process.  We get a brief origin story of the character but the rest is Nyx navigating her hatred of her demonic half and embracing her humanity all the while knowing that if she does not feed the demon, she will die.  A fate she sometimes welcomes.

This is a great opening chapter for the character of Nyx.  Nyx is a complicated character that has a lot of aspects about her.  She is really neither good or evil.  She is just trying to find her way, deal with who she is and survive or not.  Nyx only wants to be human but can her demonic half and her fellow demons allow her to be who she wants to be?