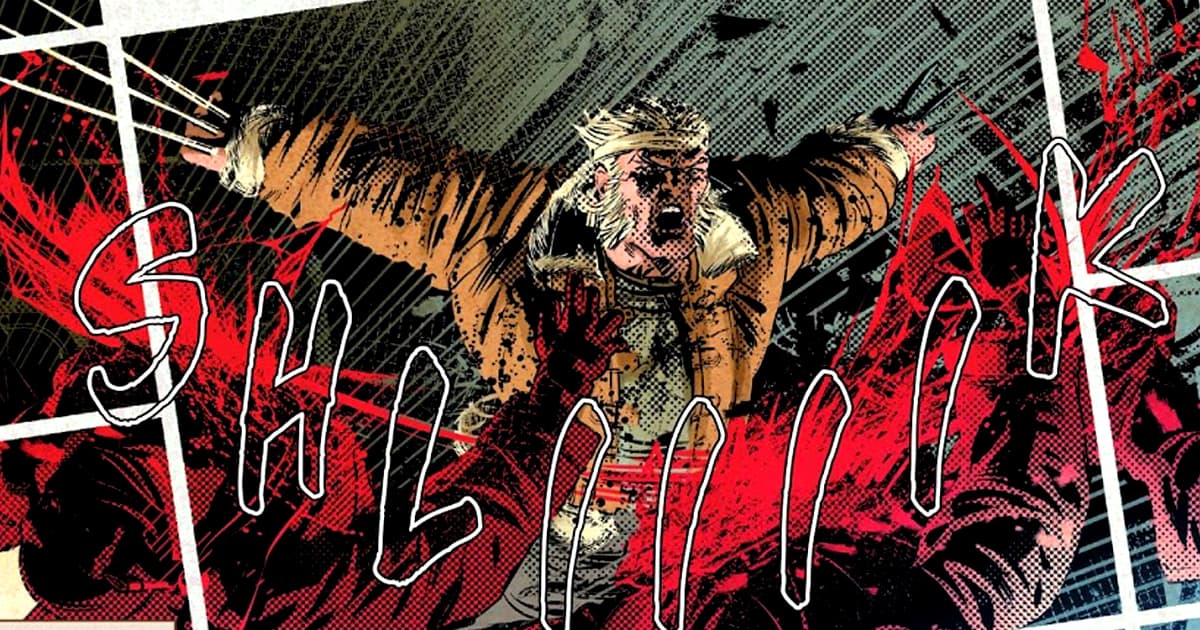 SCARLET SAMURAI PART 3 – Logan is caught between an old enemy and an old love who has been resurrected to kill him, and establish control of Yashida Corp in the name of the Hand! 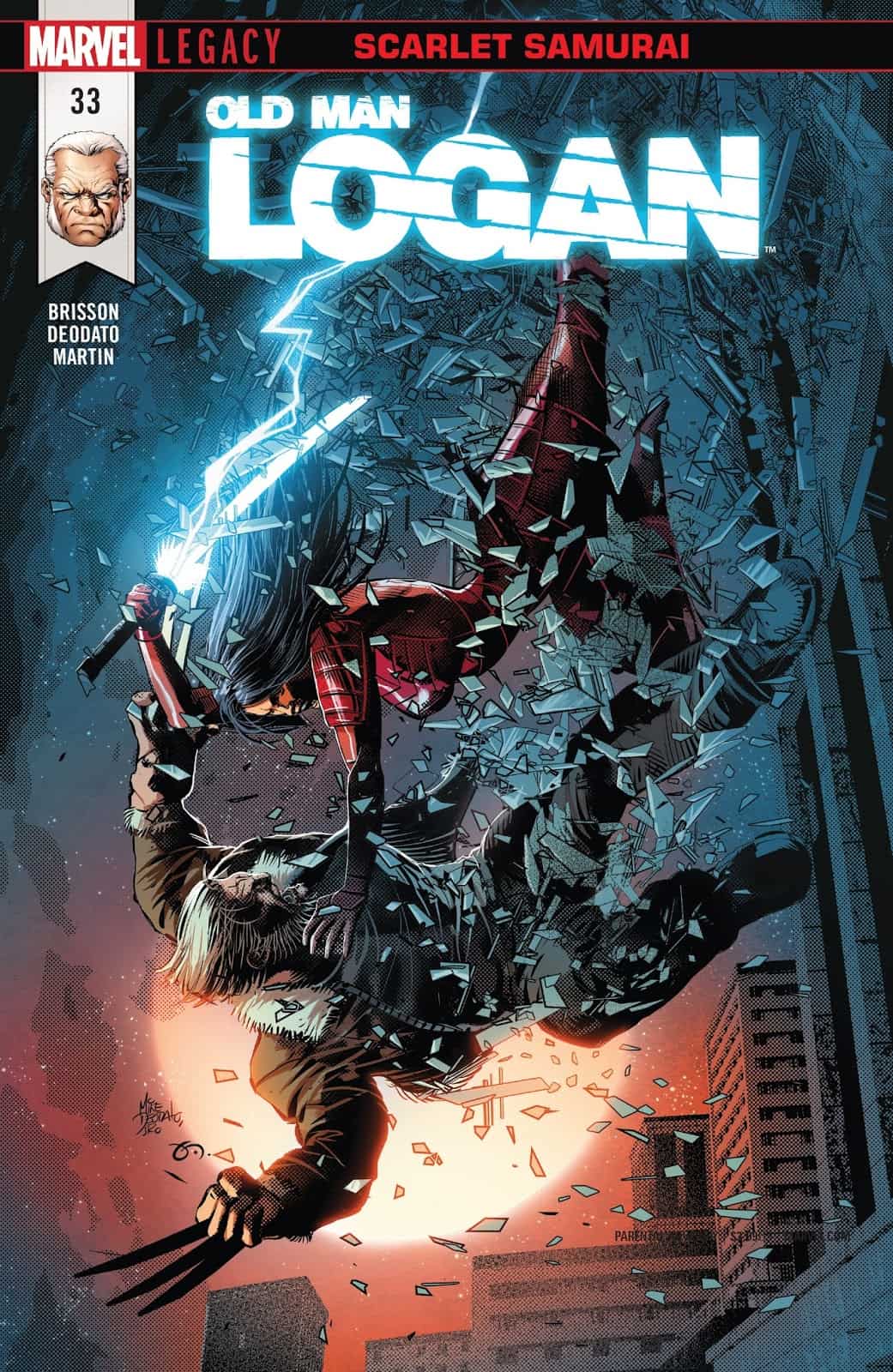 What You Need To Know:
In Japan, Logan discovered that ninjas from the Hand were able to regenerate limbs and heal from wounds instantly due to a drug called Regenix. Gorgon, their leader has been planning a take-over of Yashida Corp, by disposing of the current head of the company, Shin Harada, the Silver Samurai, by unleashing his Scarlet Samurai, the resurrected Mariko Yashida!

You can read my reviews for the first parts of this story arc here: Part 1 and Part 2

What You’ll Find Out:
A flashback to a long time ago.
Several lifetimes ago, when put into perspective.
It was Logan’s first time in Japan with the X-Men.
Beauty captivated the Beast.

It was a love affair with an unhappy ending. That ending is about to have an encore. 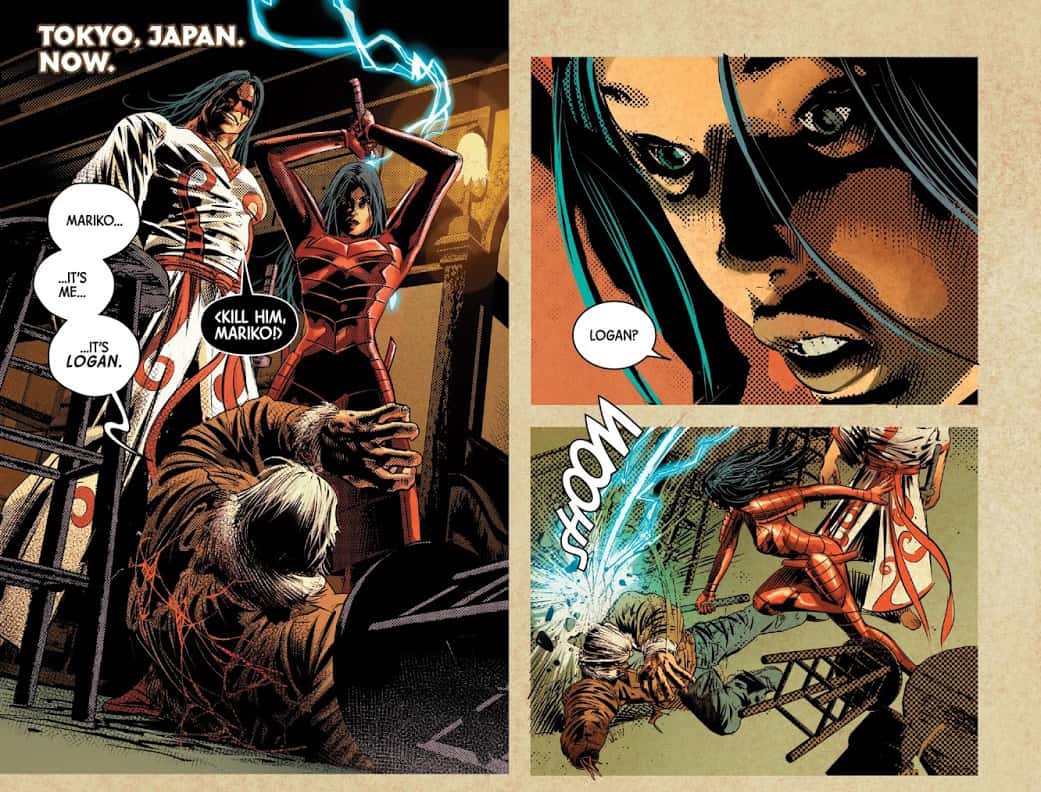 Having cut off Logan’s right hand, and slicing right through his adamantium, Mariko struggles after recognizing Logan, and clumsily continues her attack on him. Knowing he is outgunned, Logan retreats, clawing his way out through ninjas, and is able to escape to the chagrin of Gorgon. 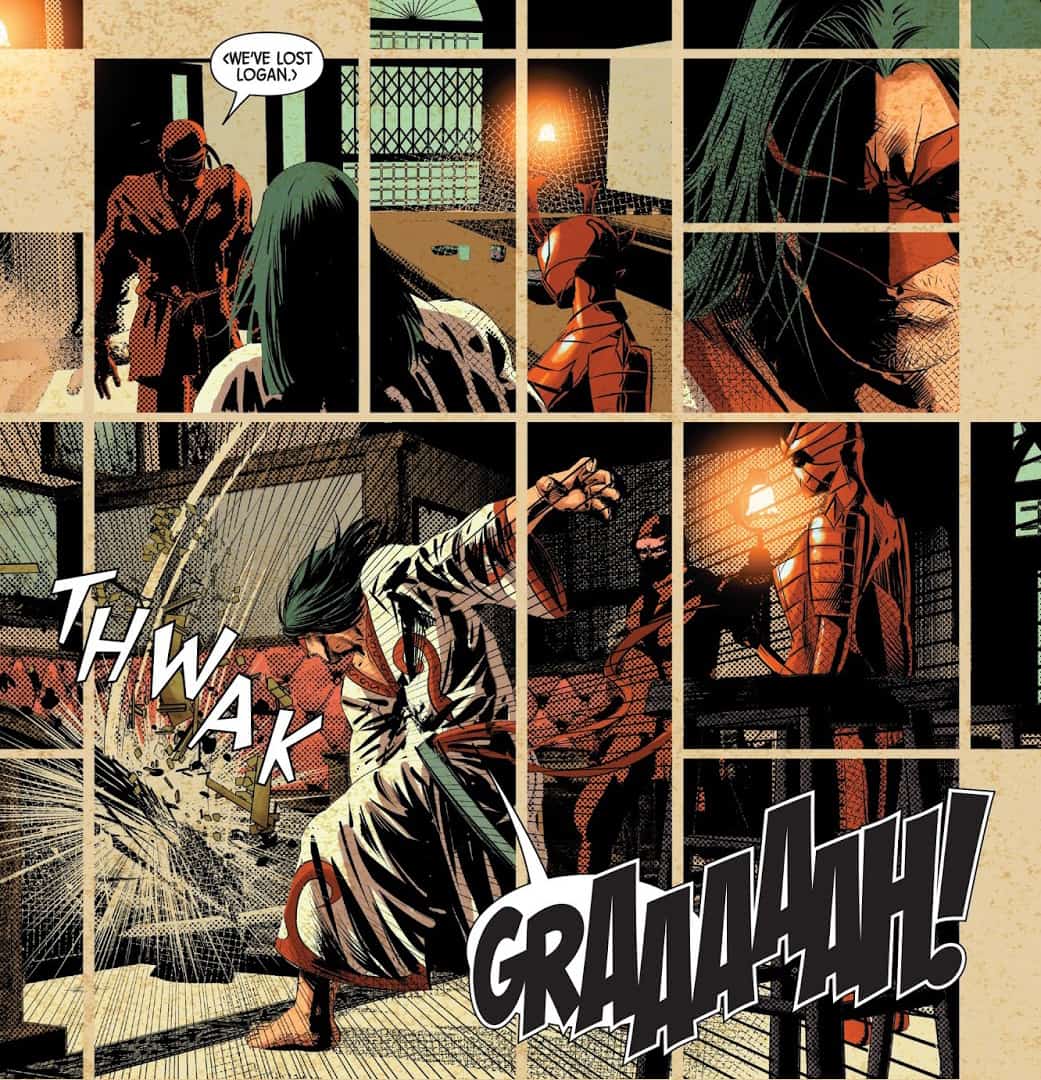 Not his first temper tantrum…

Later, as Logan allows his healing factor to work on his hand, he is approached by Shin.

Meanwhile, all is not smooth at Yashida Corp. with the impatient Gorgon. 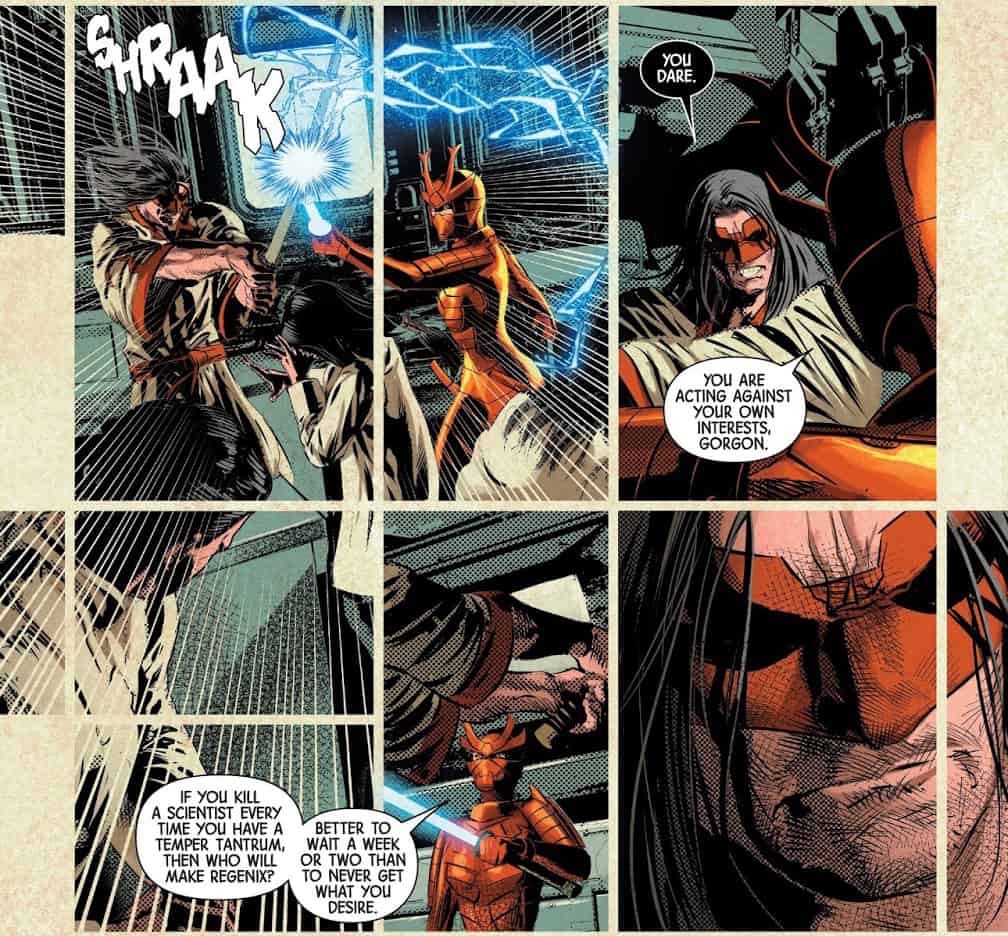 It’s a perfect time for Logan and the Silver Samurai to make their move. 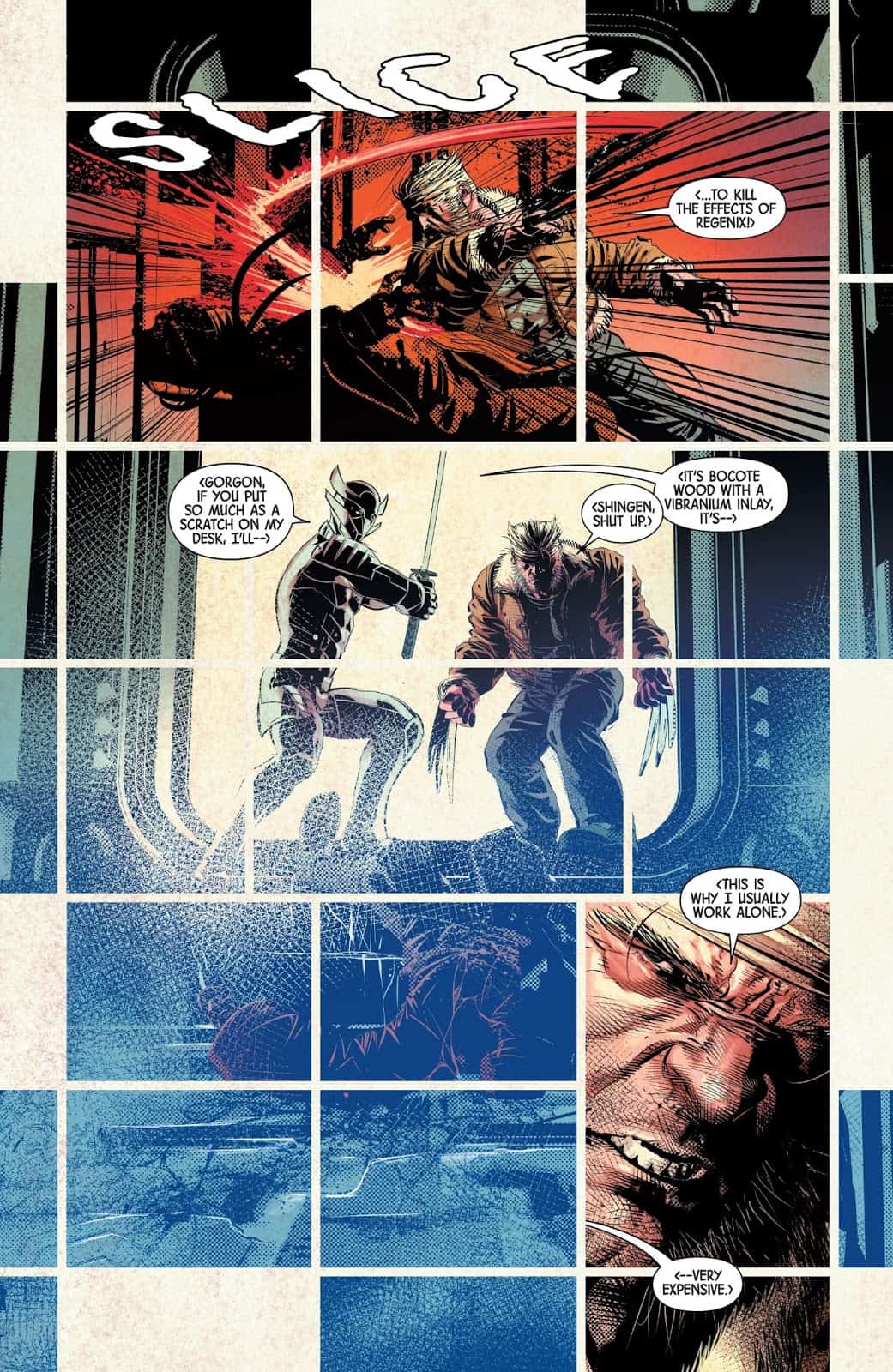 Thankfully, Logan’s right hand has grown back, but with bone claws; the adamantium coating did not reinstitute itself (at the cut-off point, I assume).
And thankfully, he had Shin as his backup. 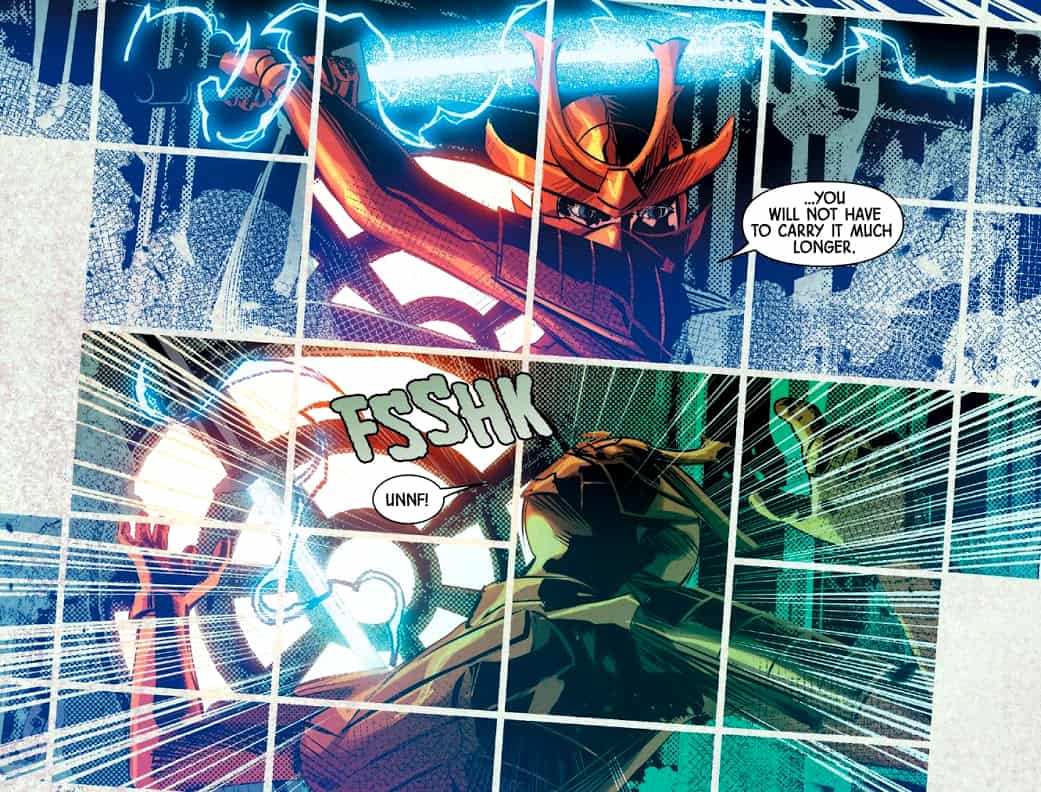 Shin claims to have released Mariko from the Hands control. so now he asks a favor of Logan; for him and Mariko to destroy the Regenix shipment Gorgon is after and to leave Madripoor.
TO BE CONTINUED…

What Just Happened?
It’s interesting that Old Man Logan is the one to encounter Mariko instead of the newly resurrected Logan Prime. Will she stay alive long enough for them to meet? Truth be told, the Scarlet Samurai identity reveal was not a surprise for me, and I suspect the same for other long-time readers. I almost feel as if there should have been a few more pages, maybe with some dialogue between Mariko and Logan before next issue, as this issue’s ending fell a little flat for me.

Shingen, the new Silver Samurai feels like another Shiro/Shinobi/Matsu’o/Daken-type character. Don’t get me wrong, I like that type of character, especially around Logan. But any of the characters I named could have been Shingen in this story. I’d like to see him stand apart from that archetype a bit more. I did like this scene, however.

The detail in Mike Deodato’s work is really incredible. The rage and despair in Logan’s face at seeing his beautiful “white chrysanthemum” be used in this way are rendered beautifully. 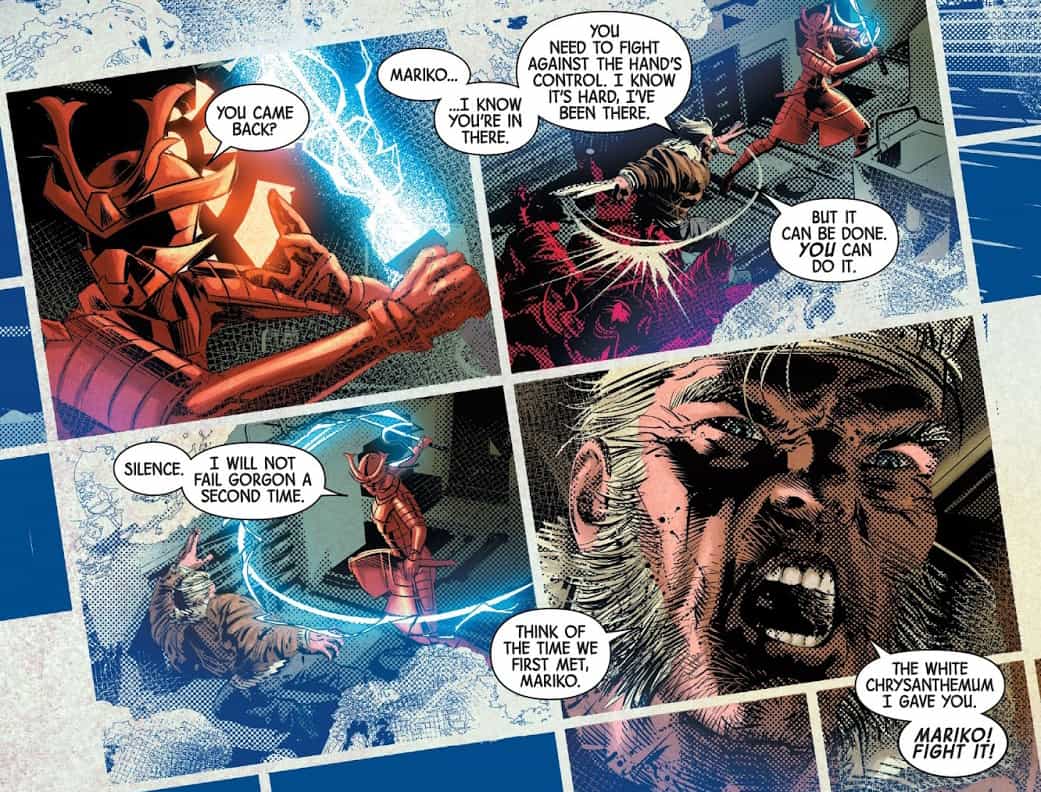 I highly recommend following Mike Deodato on Instagram.
I must acknowledge colorist Cory Petit. His color textures and hues used have been incredible and have really enhanced the already stellar art.

This is a winning combo! A beautiful presentation.

Rating 8.5/10
Final thought:
WIth Mariko alive and seemingly free of the Hand’s control, what now? This issue leaves a lot of questions to be answered. As always with this creative team, the synergy is on-point, and I’m still “on the edge of my seat”, anxiously awaiting the next issue!