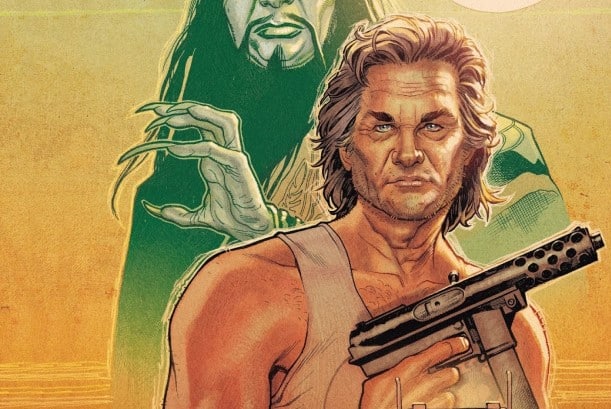 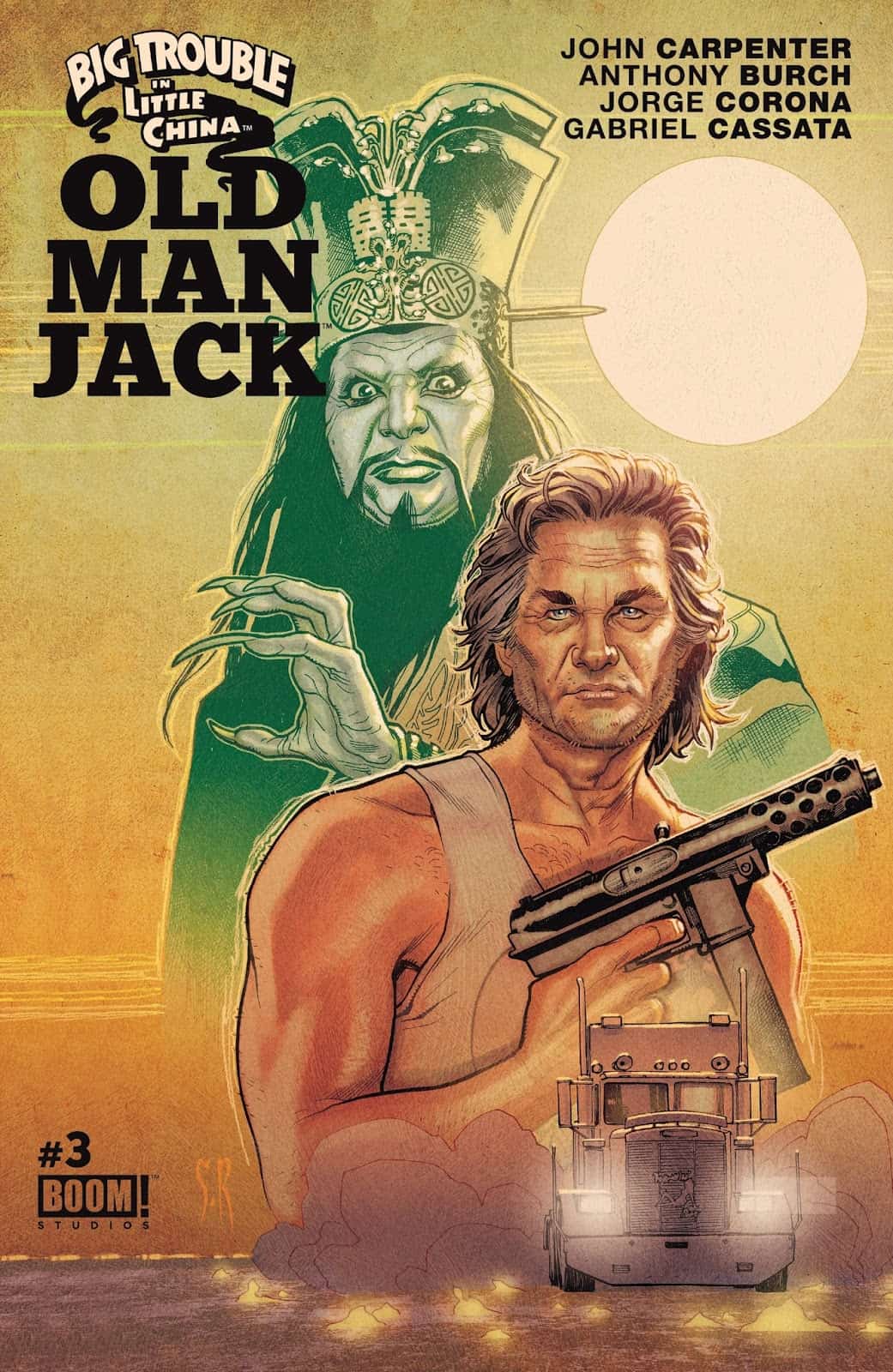 I adore the covers for this series

It‘s like I told my ex-wife, I never drive faster than I can see, besides, it’s all in the reflexes…

What You Need To Know:
Based on the continuity set by the big trouble in little China comic, a sequel to the movie. (if you haven’t seen the movie you’re gonna want to watch it, for the good of your soul) Jack Burton started out in the paradise of Palatka Florida, with all the beer and quiet he could ever want, but at a cost. 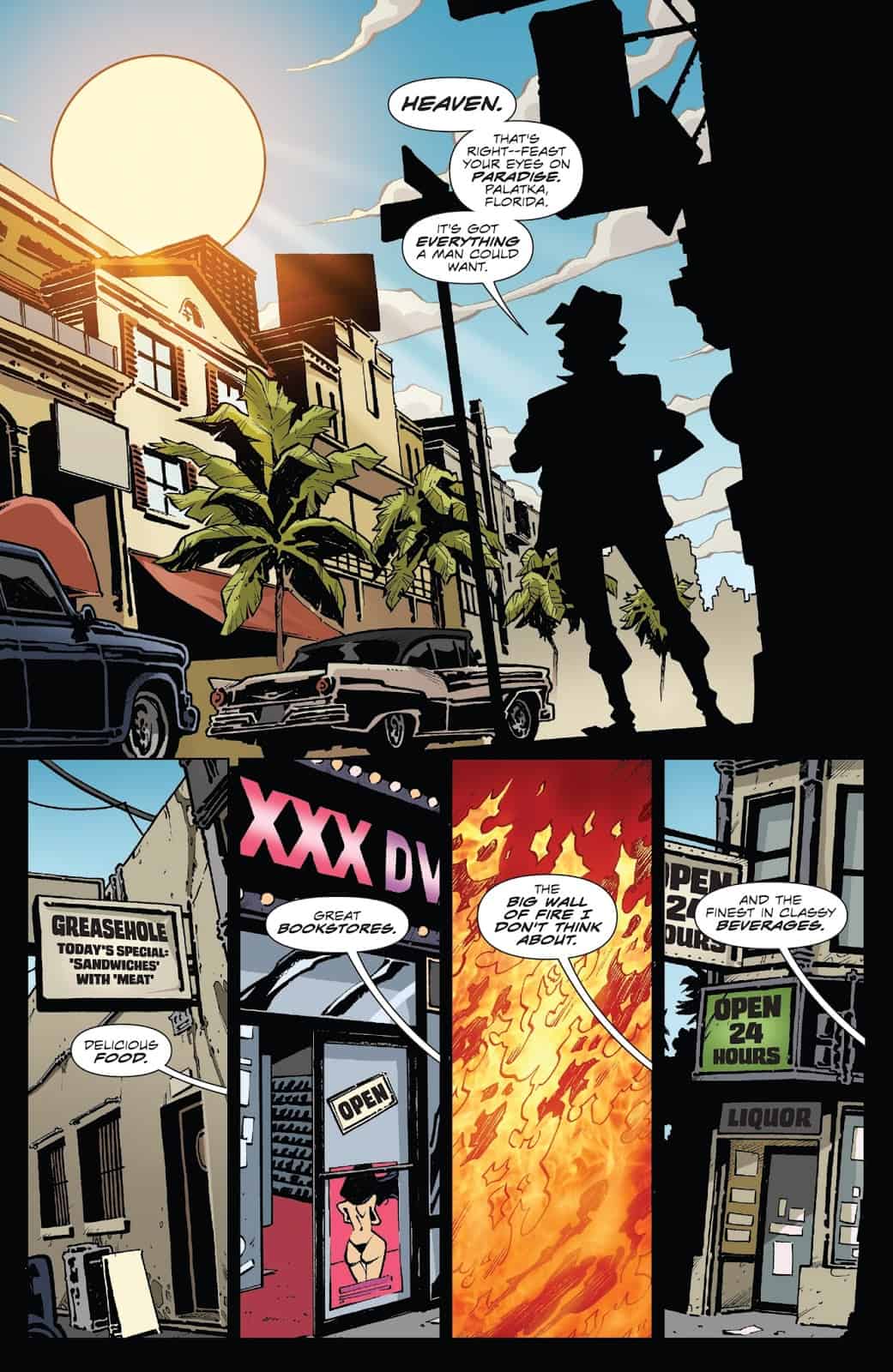 Jack had made a deal with no downside he could see with the demon Ching Dai, in exchange for paradise he sold humanity down the river, the world is now a flaming hellscape. Jack has been lured out of his paradise with the promise of attractive blondes, and is traveling with sworn enemy Lo Pan into the flaming ocean in search of ladies, or salvation? Probably ladies.

What You’ll Find Out:
We open to find a blind Jack and Lo Pan hightailing the Pork Chop Express across a burning expanse of land, traveling toward San Francisco Chinatown and Ching Dai’s throne of skulls, where Lo Pan claims he can kill Ching Dai and fix everything.

Lo Pan warns Jack the flaming ocean is not just a land of physical danger, but mental danger as well. Just then Miao Yin appears, assuring Lo Pan that she finds him totally attractive, and not at all super creepy, Jack manages to stop him before he dives into a lake of fire after her. 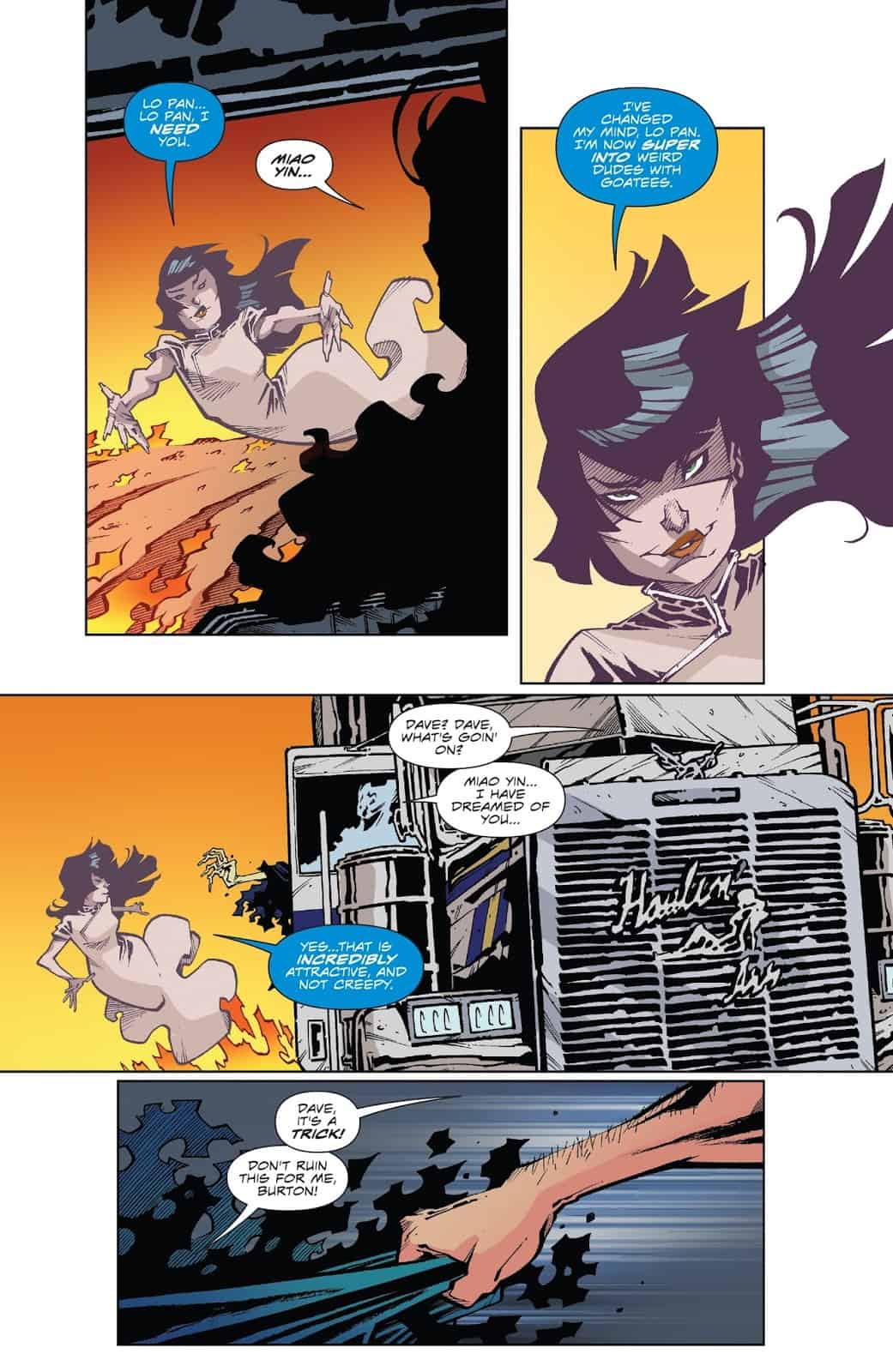 As Lo Pan snaps out of it Jack is struck by a hallucination of his own, Wang, covered in blood, is accusing Jack of killing him. We cut away two years ago, a much younger Jack is talking to Wang on a payphone in a sleazy bar. Lo Pan slaps jack back to attention as a demonic version of the Pork Chop Express comes alongside the truck.

Inside are demonic versions of Wang and younger Jack, they are talking about a recent procedure Wang had done. Wang asked when the last time Jack had gotten a tune-up for the truck, as its ancient and poorly maintained. As Jack replies a dog darts out in the street and the lumbering aged behemoth is unable to stop in time. We snap back to the real world and Jack rams the Demon Chop Express into a rock, Wang goes through the windshield as Miao Yin attacks again, strangling Jack. Lo Pan says he has never found her more attractive. 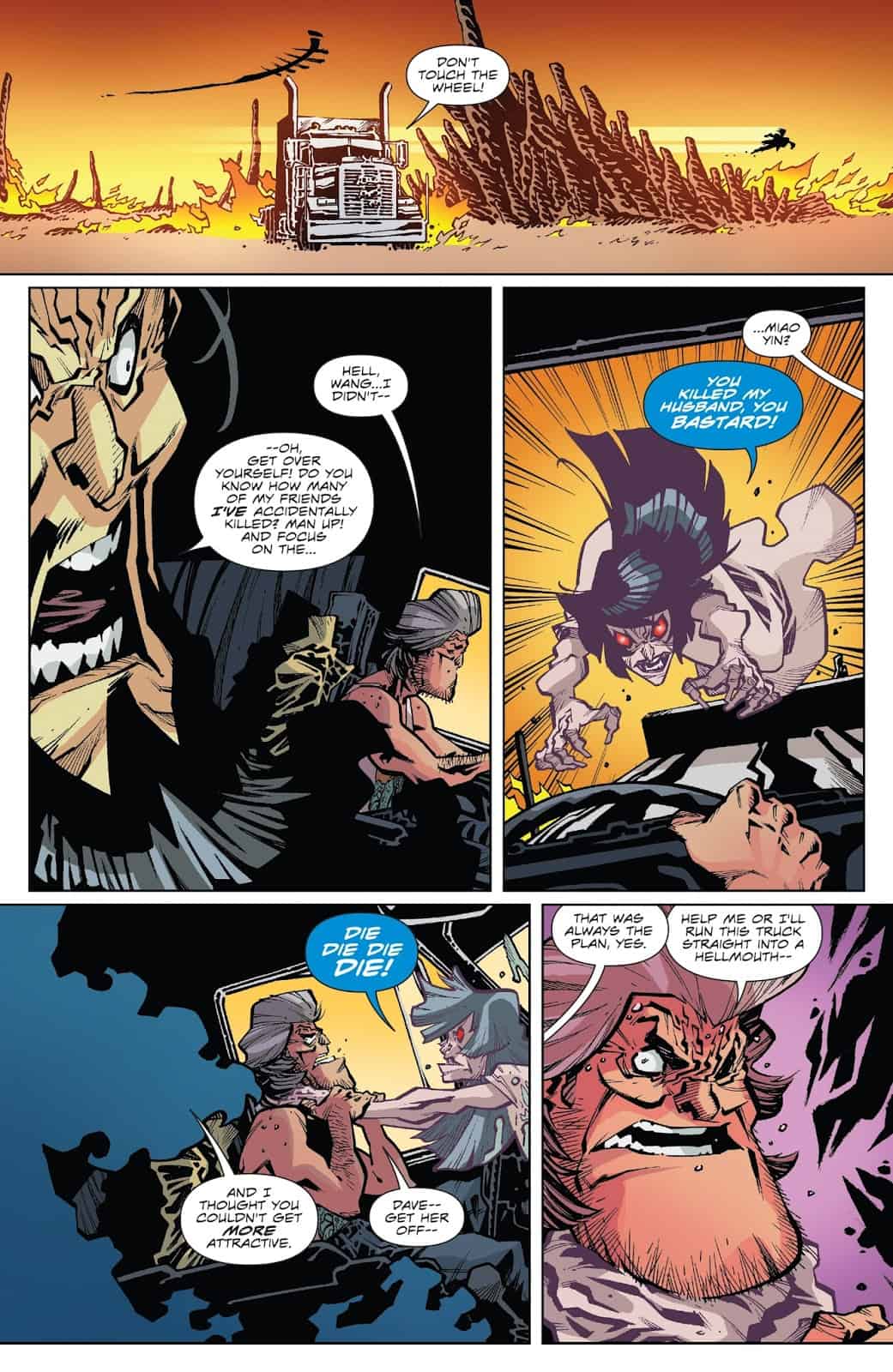 Suddenly Egg Shen is on the hood of the van, telling Jack he warned him not to try to resurrect Wang. Lo Pan says Caucasians can’t do Chinese magic, Egg Shen explains Jack had an ally. Just then Jack slams on the breaks and Egg Shen falls off. Lo Pan asks who Jack allied with, Jack doesn’t say.

Suddenly a 60-foot tall version of Jack appears, detailing the deal. Giant evil jack (I’ll call him GEJ from here on out) steals Egg Shen’s magic book, summoning Chang Dai. He says he wants a deal, he’ll help Chang Dai if the demon will bring Wang back, Chang says he doesn’t need anything, he just wants Jack to shake his hand and be his friend. 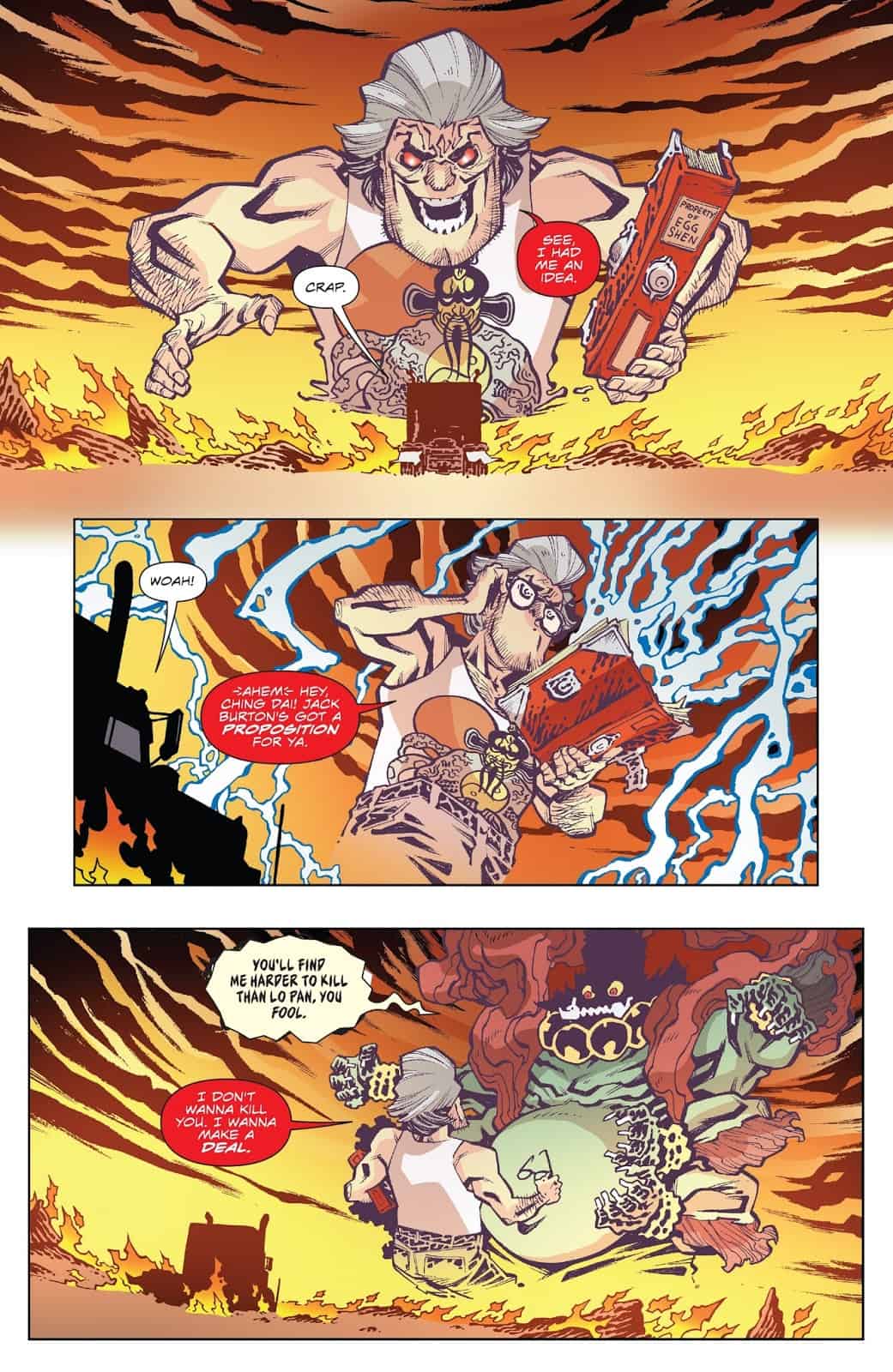 Jack extends his hand and shakes the demons flaming limb, as he does Chang Dai laughs as his arm burns off. Chang Dai reveals in order to resurrect Wang he needed to walk on earth, which required a bridge of flesh.

Lo Pan explodes at Jack, he doomed humanity to save his friend. Chang Dai says he was a good friend to Jack, granting him his missing limb and paradise in Pataka. An infuriated Lo Pan hangs Jack out of the door, Chang Dai assures Lo Pan Jack is the source of his problems, if he kills him he might feel better, he knows what he wants to do. He drops Jack. 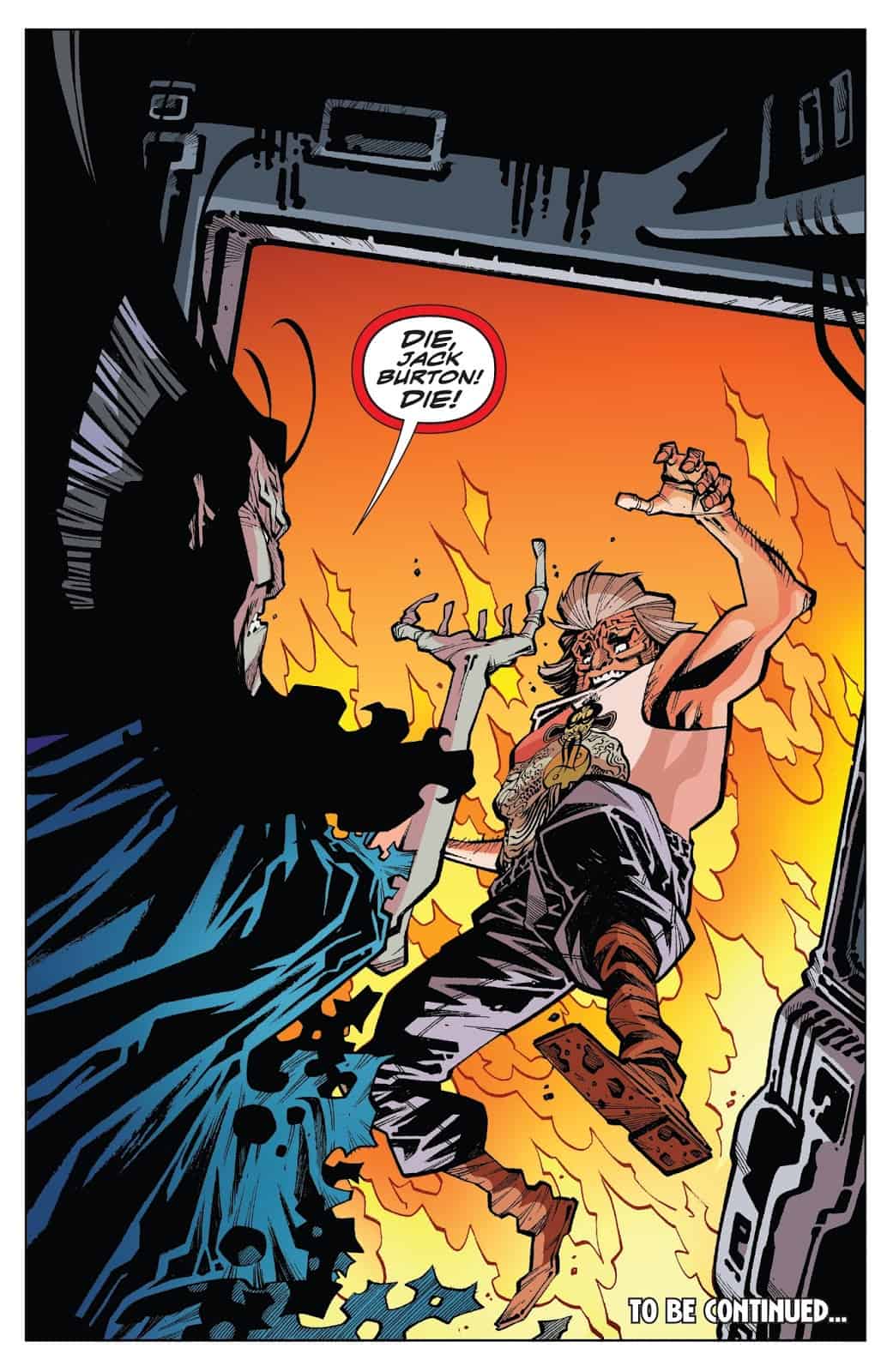 Plot: I have been consistently loving this book, by far the funniest book set in a demonic post-apocalyptic hellscape possible, the humor has been consistently great, and the plot is silly and a bit all over the place, yet somehow familiar. Highly recommend this book for any fan of the movie, movies in general, jokes, Chinese folklore or comic books, a decent Kurt Russell impression is a bonus.

The art is a bit cartoony but perfect for the tone of the book, the character designs are great, and Burton’s chin is the stuff of legend, second only to the great Bruce Campbell. Honorable mention goes to the covers, the A covers for this entire series have been works of art, the beautiful likeness of our Lord and savior Kurt Russell, set across tropical backdrops.

Final thought:
When some wild-eyed, eight-foot-tall maniac grabs your neck, taps the back of your favorite head up against the barroom wall, looks you crooked in the eye, and asks you if you paid your dues; you just stare that big sucker right back in the eye, and you remember what ol’ Jack Burton always says at a time like that: “Have you paid your dues, Jack? Yes sir, the check is in the mail.”