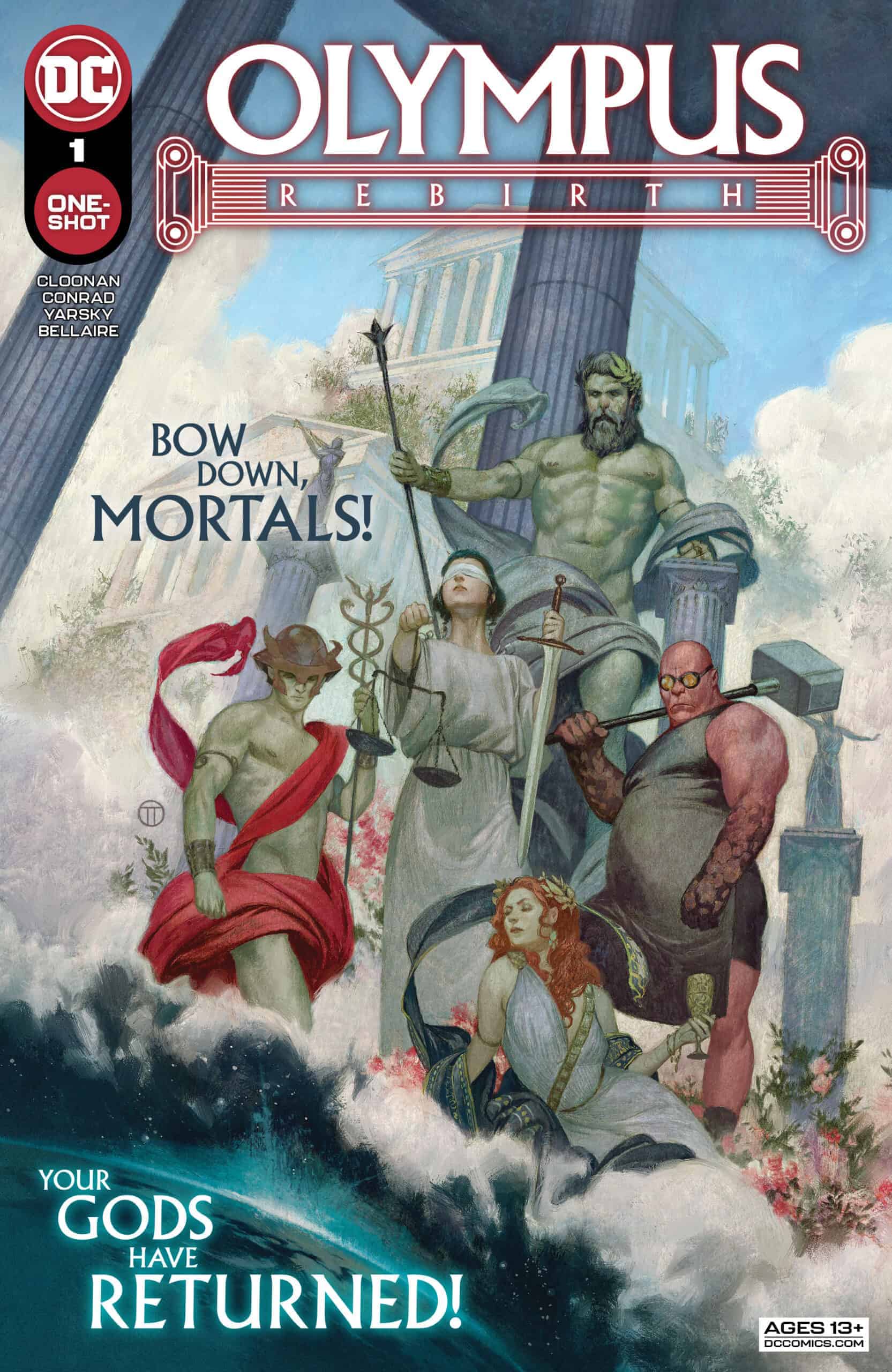 An adventure of mythic proportions! After years of bitter and violent conflict, the Greek pantheon of gods stands united to welcome their latest goddess…Hippolyta of Themyscira! Due to her heroic efforts in the mortal realm, the former queen has earned her rightful place among the gods and plans to use her newfound powers to take care of her Amazon sisters from beyond. Little does she know, some of the gods are wary of the new future Hippolyta brings and will do just about anything to stop it! Join the Wonder Woman writing duo of Becky Cloonan and Michael W. Conrad-along with artist Caitlin Yarsky (Black Hammer) in her DC debut-for an unforgettable new adventure on Mount Olympus. It’s only the beginning of many exciting things to come for Wonder Woman and her world of characters!

I admit I didn’t have a ton of interest in Olympus: Rebirth #1 when I first heard about it. The Greek Gods of DC Comics have been very hit-or-miss over the decades, and they’re constantly changing and completely ignoring any aspects of past versions of themselves. However, Michael W. Conrad and Becky Cloonan smartly reference past storylines featuring the gods throughout this one-shot while also adding several new plot threads that will be explored in the Wonder Woman title.

The entire issue feels very much like an epic Greek poem, with Hippolyta making her way through Mount Olympus and its residents. Nearly every god who has ever appeared in a Wonder Woman comic makes an appearance here in some capacity, with many heralding Hippolyta’s ascent to godhood and others plotting behind her back. Caitlin Yarsky makes her DC Comics debut as an artist, and her illustrations fit the story very well. There are so many gods and so many designs to work with, but I do feel some are weaker than others. Demeter, for example, looks quite bland when you look at the otherworldly Artemis. I wasn’t thrilled with Aphrodite either, who felt like a young Disney Princess rather than a seasoned queen of love and beauty.

Some of the gods are also stronger than others. Yarsky’s Hera is clearly inspired by the revolutionary Wonder Woman Historia: The Amazons. There’s also Hecate, who has a simple but horrifyingly effective design that blows my mind. 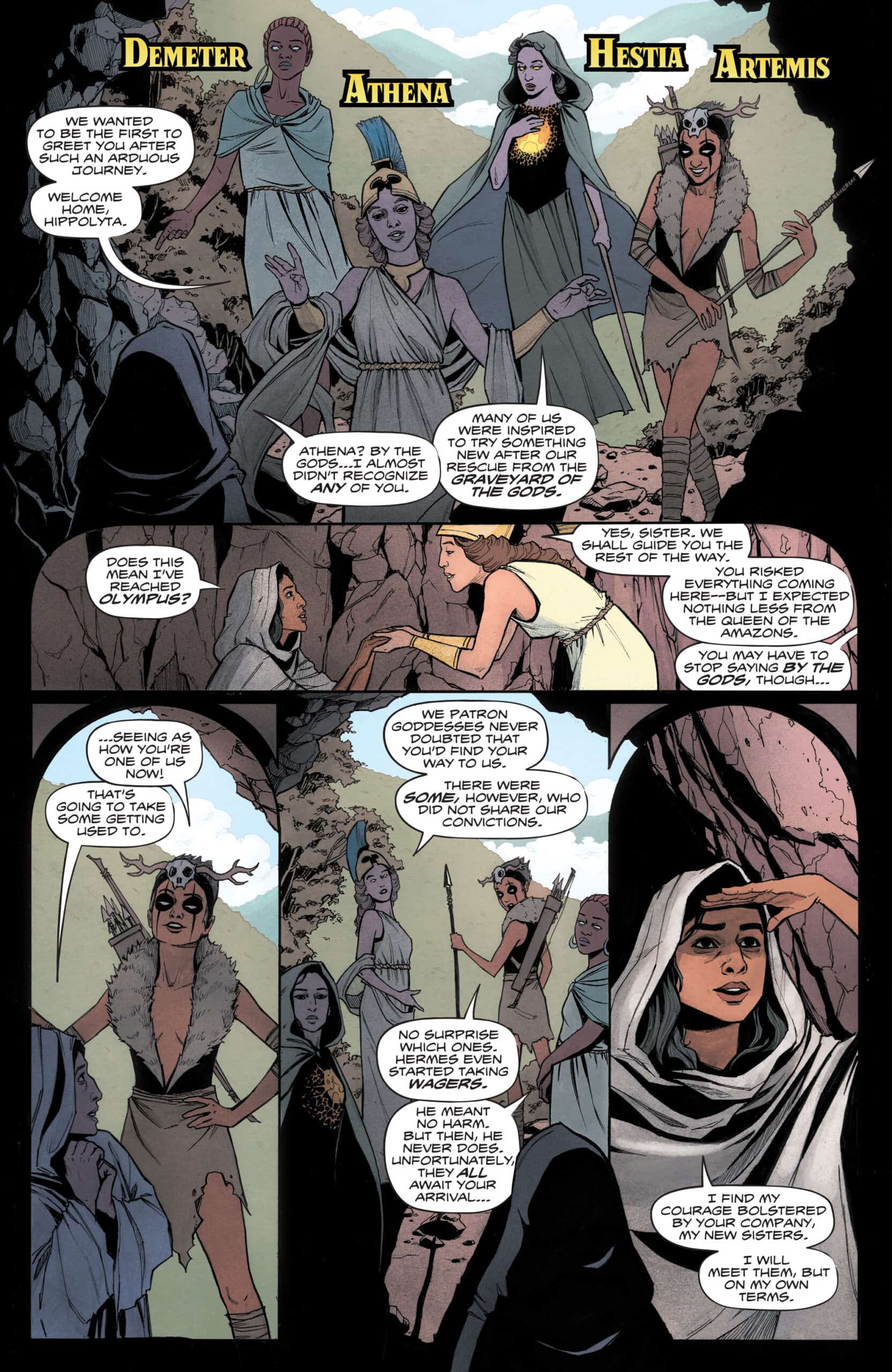 Hippolyta’s journey is brilliantly written by Cloonan and Conrad. From little moments like gossiping with Hermes to confronting Zeus as he flirts with a trio of nymphs to the dilemma at the climax of the issue, Hippolyta has never been more interesting. There’s a lot of story potential here. We’ve seen Hippolyta die so many times in the past, so having the queen ascend to Mount Olympus offers so many possibilities for future stories that aren’t just “let’s bring Hippolyta back to life for the eleventh time.”

We do get a little bit of Wonder Woman in the comic, too, as she eats lunch with her main supporting cast. There’s a very funny joke about Thor that had me cackling. And a very emotional scene that will resonate with anyone who has lost their mother. I lost my mother in 2017, so moments like this stand out for me.

If you're a Wonder Woman fan, this story is essential reading. There are many plot threads set up for future issues of the main title, and you get to see what Hippolyta has been up to after the Trial of the Amazons event. I know there's also several fans who love the scheming and politicking of the Greek Gods who should find joy with this one-shot. Pick this up -- you won't be disappointed.