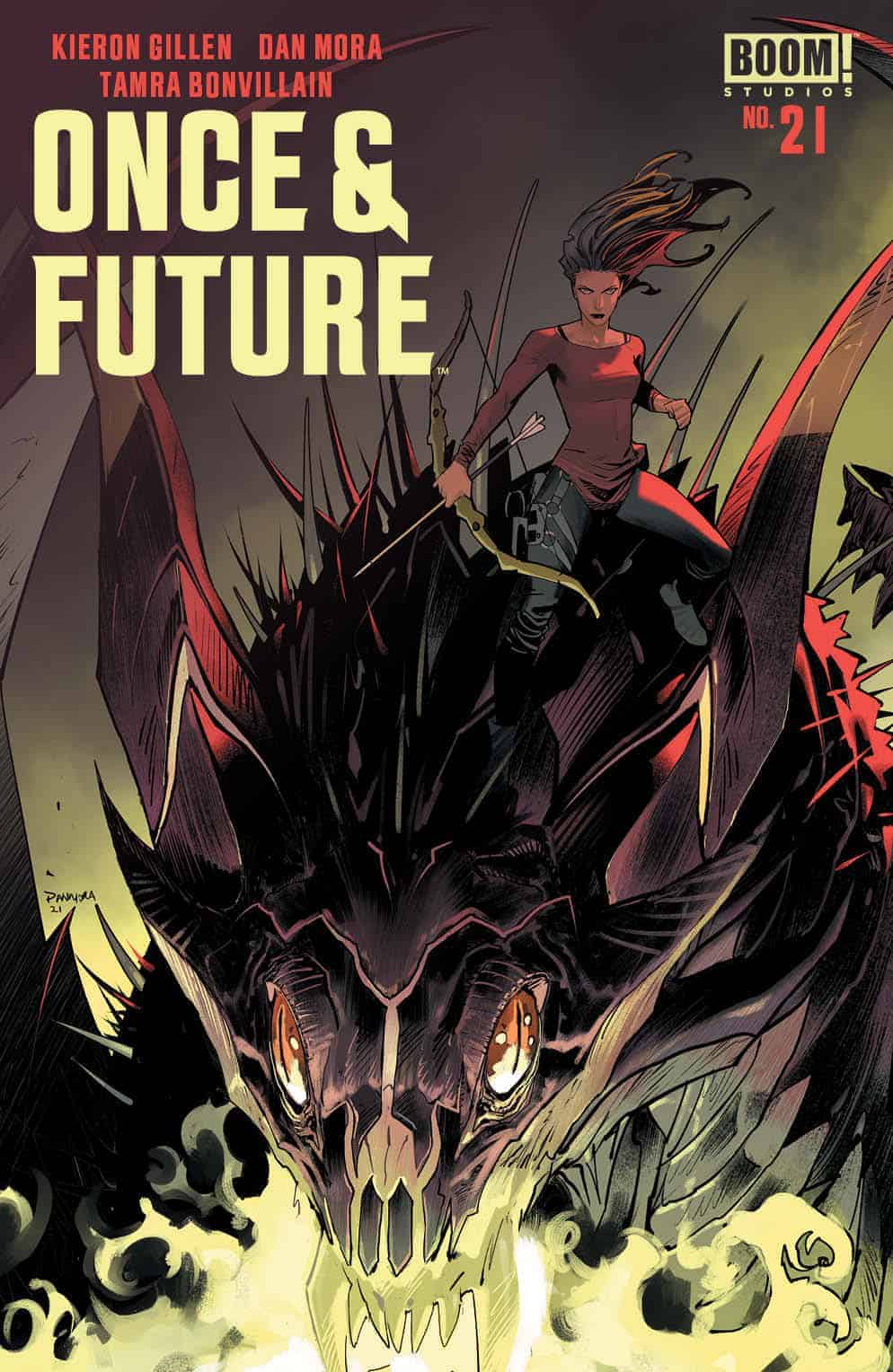 What ancient and mythical danger awaits Bridgette, Duncan, and Rose as they seek Rose’s parents in the city of Bath? To complicate matters, an Arthurian knight pursues them with an offer for Rose and Duncan – join the Round Table or face death. If they survive the encounter, they’ll be pulled into the next phase of Bridgette’s plan… finding the lair of the greatest hunter the world has ever seen.

Myth and fantasy is always a compelling theme or flavor to add into a series, and Once & Future is proof that the power of myth can expand beyond the reach of thematic resonance or narrative symmetry. It’s a story about the ways in which a story can shape the world, both in a literal and more figurative sense. In most narratives, it’s characters and their actions that help drive a story, but Once & Future takes it a step further and allows for stories to drive the characters to action. It’s a story engine that feels unique in any medium, and one that makes the book such a gripping read month to month.

Kieron Gillen’s scripts always feel like the best type of action moves, with slick, stylized movement and a blend of emotion with action. It’s said that action movies and musicals exist in a world where dialogue breaks down, and the respective actions (violence and dance) are the purest form of communication between characters. That’s what Gillen’s script expertly does in this issue, using the action to not just jolt the reader, which certainly does help, but also conveys a lot about its characters. We see how far characters like Rose have come, which is humorously quipped on by her father, thanks to her use of assault weapons against a Gorgon. For Rose, and to an extent Duncan, their academics thrust into a world and roles of knights defending the land, and their loved ones, and when they no longer can try and rationalize actions through words, they are forced to turn to violence. It’s a brilliant turn and a larger story arc for both characters.

Gillen’s words, while being a massive influence on story driving action and plot, is nothing without Dan Mora’s breathtaking art. Normally, the focus on Mora’s art is his amazing talent at rendering dynamic action sequences, but in this issue, the moments where the linework sings in the dynamics between characters. There’s a fun, vibrant, and kinetic way the art plays out between Rose, Gran, and Duncan and it’s the moments in between action where the three can quip at each other and react to the environment that sells the issue. But maybe more than anything else, the standout page, is one not of intense action, but a quiet moment of the trio having their picture taken, so that the memory of the moment can be immortalized, and that Gran can plan to return to it.

Mora knows just the perfect way to balance the mishmash world of present-day Bath with the influence of Otherworld and its historical roots. But what makes the world feel both familiar and alien in the same breath is Tamra Bonvillain’s enthralling colors. It’s no secret that Bonvillain is the unsung hero of this book, her colors bringing Otherworld to life in a dizzying spell of yellows, greens, and blues for the first half of the issue. What remains to be the signature coloring flourish of the book, that adds an almost stained glass quality to the art and story is the use of color bubbles splashing the pages. It makes the panel unfolding feel more mythic and legendary, like the images of saints in a catholic cathedral. The coloring is a phenomenal way to reinforce the myth and story aspect of the book and is always a delight, between big action set pieces and intimate conversations between family.

Once & Future is a once and a lifetime book, in which the writer is breaking barriers in the way they’re telling the story, the artist is constantly bringing their art to new heights in both the action and quiet and the colorist is weaving an intricate and inspired sense of fantasy and wonder clashed with terror and violence. Issue #21 does not disappoint and is a reminder that stories can sustain and keep you going, to push you into doing whatever it is you want, or need to do.