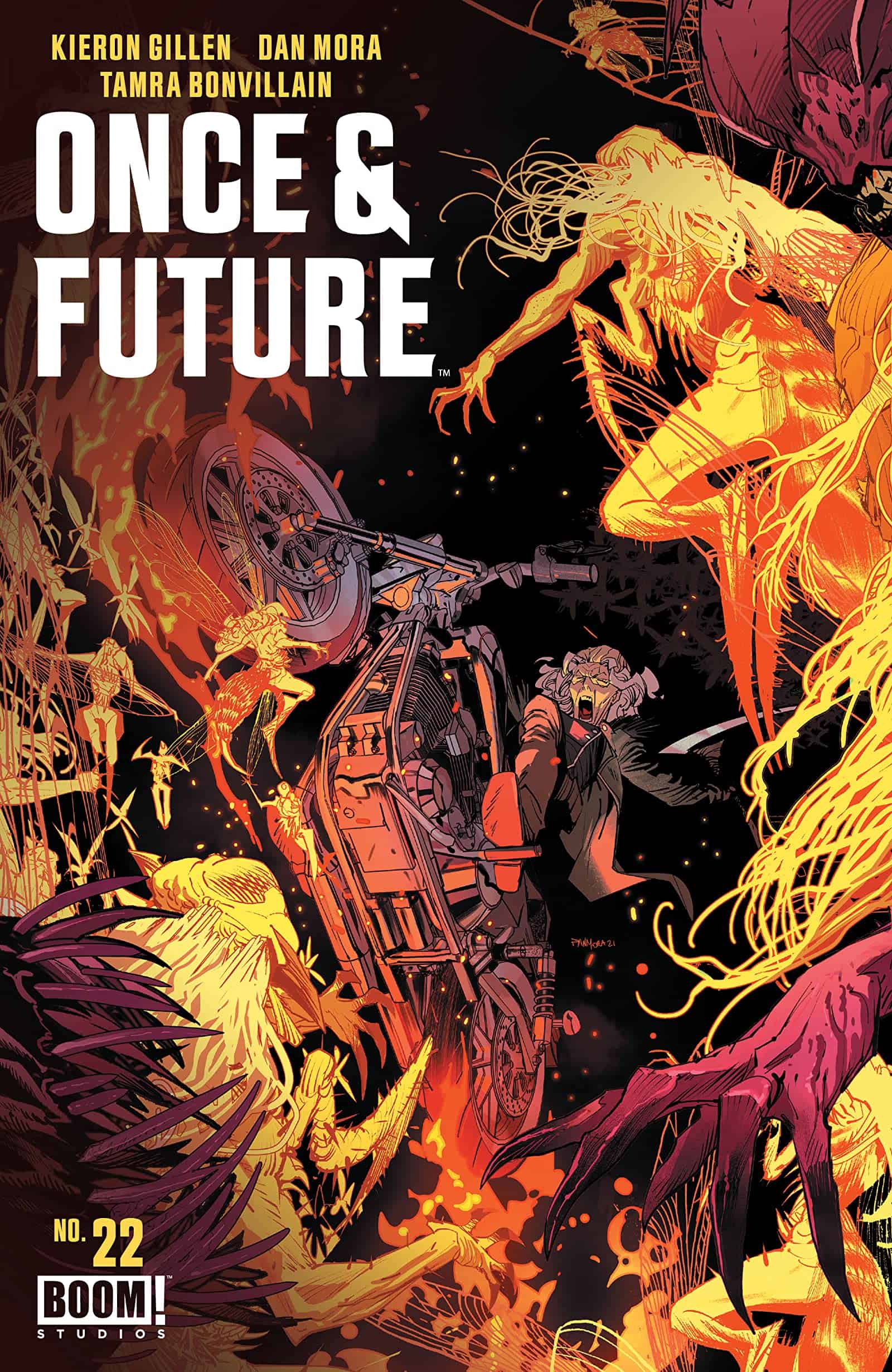 Will a shocking turn of events be enough to turn the tide of the entire world?
The war continues to rage across Britain as both Arthurs prepare to face one another for ultimate rule of the land. As Duncan, Bridgette, and Rose arm themselves for what's to come, a surprising betrayal threatens even the most carefully laid plans!

It’s honestly a surprise that it took 22 issues to get a Shakespeare reference in Once & Future, the bard is one of those cultural touchstones that both has transcended his British nationality, while still being holistically a British writer. In a lot of ways, Shakespeare holds the same literary weight as Arthurian mythology to the world outside of Britain. The two are the top literary exports from the isle, and it’s clear why Once & Future #22, written by Kieron Gillen with art by Dan Mora, colors by Tamra Bonvillain, and letters by Ed Dukeshire, pivots the story and brings the Bard of Avon into the fold.

Gillen’s scripts shine and show their strength through the continued use of various aspects of mythology and folklore, and how it’s used in the meta-narrative to propel the plot and action forward. It’s the same magic trick that book series like Percy Jackson or the best Thor comics use, turning those myths into fuel for an original story, and rewarding the reader for knowing. It’s how Percy Jackson turned one generation into massive mythology fans, and how hopefully, Once and Future could captivate another generation of readers. Gillen continues the pitch-perfect tone of biting satire, bombastic action, and dark implications for the reality below the mythology. In between battling knights riding gigantic lions and learning Shakespeare was the greatest monster hunter of history, the audience is treated to wonderfully badass sass of Bridgette explaining that the sword and the pen are equally important, but a rocket launcher is better in most circumstances.

That perfect balance is only possible thanks to the perfect combination of Mora’s art and Bonvillain’s colors. It’s clear that their pencils and colors are in sync no matter what book they’re working on, but every issue of Once & Future reminds us that there’s a special alchemy that might ever be reached elsewhere. Maybe it’s just the genre and vibe of the series or the connotations of mythology and reality, but Mora and Bonvillain’s work on other books like Detective Comics is still one of the greater joys of art in a big two book, but it just feels a little lustrous than the experience an audience gets in Once & Future.

The book’s action, both the narrative movement of fighting, various figures and monsters with a healthy combo of traditional and modern weaponry, and the way in which Mora depicts and Bonvillain emphasizes with color, is always a refreshing read. Even in a world of magic and myth, every shot, slash, and stomp feels solid and founded, with a deft hand rendering the combat. Mora and Bonvillain ground their action in a way that most other media, comics and film alike, seem to miss. It’s the hollow CGI issue that modern blockbusters fall to and makes the combat and action feel meaningless. Mora’s action never feels wasted, and just like a dance sequence in a musical, the action always reveals something about the characters or moves the plot forward. Rather than being just spectacle and pretty pictures to look at, Mora’s art and Bonvillain’s color, guided by some spectacular lettering by Dukeshire, never miss a beat in Gillen’s rhythm, and always propel the book into its next gear.

With 22 almost perfect issues under its belt, Once & Future continues to be one of the best independent books operating on the comic scene. The creative teamwork of Gillen, Mora, Bonvillain, and Dukeshire is one for the history books and will be immortalized in the minds of fans in the same way Shakespeare is for many. The book’s action is just another one of those aspects that proves the perfect sync that all of the creatives are in working on Once & Future and makes the book to be a continued delight to pick up month after month.