Once & Future #23: Comics in the Crosshairs 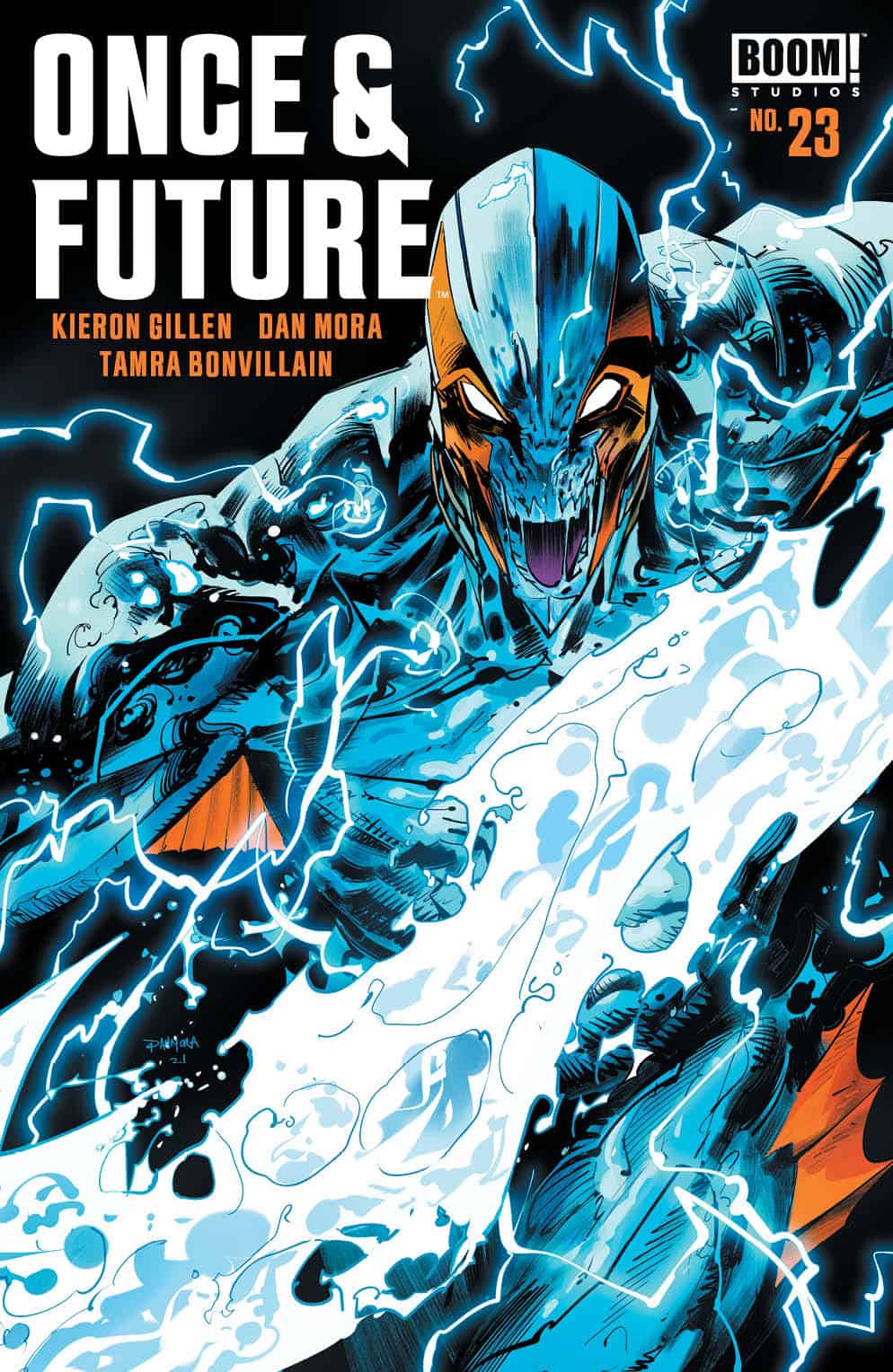 What must Nimue do to save her son? Strike up a deal with the last person she’d ever team up with… her mother, Bridgette. Meanwhile, Duncan must find another living legend. But are they an ally…or another monster to defeat?

Rhythm is something extremely vital to comics that rarely feels talked about. The rhythm of the dialogue, panels on the page, and shifts in colors are all vital to the feel and flow of a book and take effort to maintain. It’s analogous to members of a band, who not only have to maintain their individual rhythms for a piece of music but also have to work together to sustain harmony. 23 issues in, and it’s clear that the creative team of Once & Future, writer Kieron Gillen, artist Dan Mora, colorist Tamra Bonvillian, and letterer Ed Dukeshire, have found that rhythm and no matter the issue are ready to jam.

The issue picks up with Gran being held at gunpoint by Mary, expertly rendered by Mora and composed with tension and compelling dialogue by Gillen. The issue is almost all dialogue and character beats, with a lack of action set-pieces the book is known for. That’s not a critique of the issue, as Gillen’s dialogue is as sharp as ever, and every word feels like it’s shifting and twisting with the fabric of reality thanks to Otherworld. It’s a testament to Gillen’s scripting that the book can still be a gripping read with the most action-packed sequence being two hardened women discussing plans on either side of the sniper rifle. The issue also finds a perfect rhythm in the conversation between Gran and Mary, always cutting to another plot like this story’s use of the bloody beanstalk, the twisted nature of Arthur’s knights, and the next literary reveal.

Mora masterfully renders Gran in the crosshairs with circular cropped panels, mimicking the viewer through the rifle’s scope. The composition reinforces that target on Gran’s head even as the scene cuts back and forth with dialogue. That panel composition is kept through the scene and adds a line of tension that carries the entire way through. It’s paired with a stunning page of Mary holding her rifle steadfast on Gran and the group, with a series of panels overlaid. Each beat and panel flow perfectly into one another but still feel separate thanks to Bonvillain’s colors. What is fascinating about Mora’s blocking and composition is the choice to show Duncan and Rose in the crosshairs three times in the entire sequence. It’s a tiny detail inside that opens a massive window into Mary’s frame of mind, and her utter disregard for anything but revenge.

The same rhythm that Mora’s panel work invokes can be tracked in Bonvillain’s lush color palette, guiding the reader through saturated greens and oranges. Even with the alluring colors, every image of this fantasy reality is layered with hardship and a worn feeling. Bonvillian knows perfectly when to sprinkle the perfect colored dots in a panel, her colors never straying far from the established palette of the series. Combined with Mora’s intricately simple panels set against a black gutter makes those colors flare in a distinguished manner. The coloring works hand in hand with the panel composition to heighten the emotional and visual language of the issue and layers on Gillen’s strengths as a storyteller. With any of these elements out of place, the issue’s plot could feel like a slog with the sheer amount of exposition and dialogue. But instead, Bonvillian’s color syncs up with and elevates the issue to another level.

Once & Future #23 is a visual feast that harmonizes with a gripping confrontation to present a wonderful tale about the generational pain of stories. The creative team feels like a band playing bangers after banger, working in tandem to get the blood pumping before the next big set. Even in a quieter issue with less action and more character work, the team gives it their all and reminds the reader why Once & Future is one of the best books on the spinner rack.

Once & Future #23: Comics in the Crosshairs