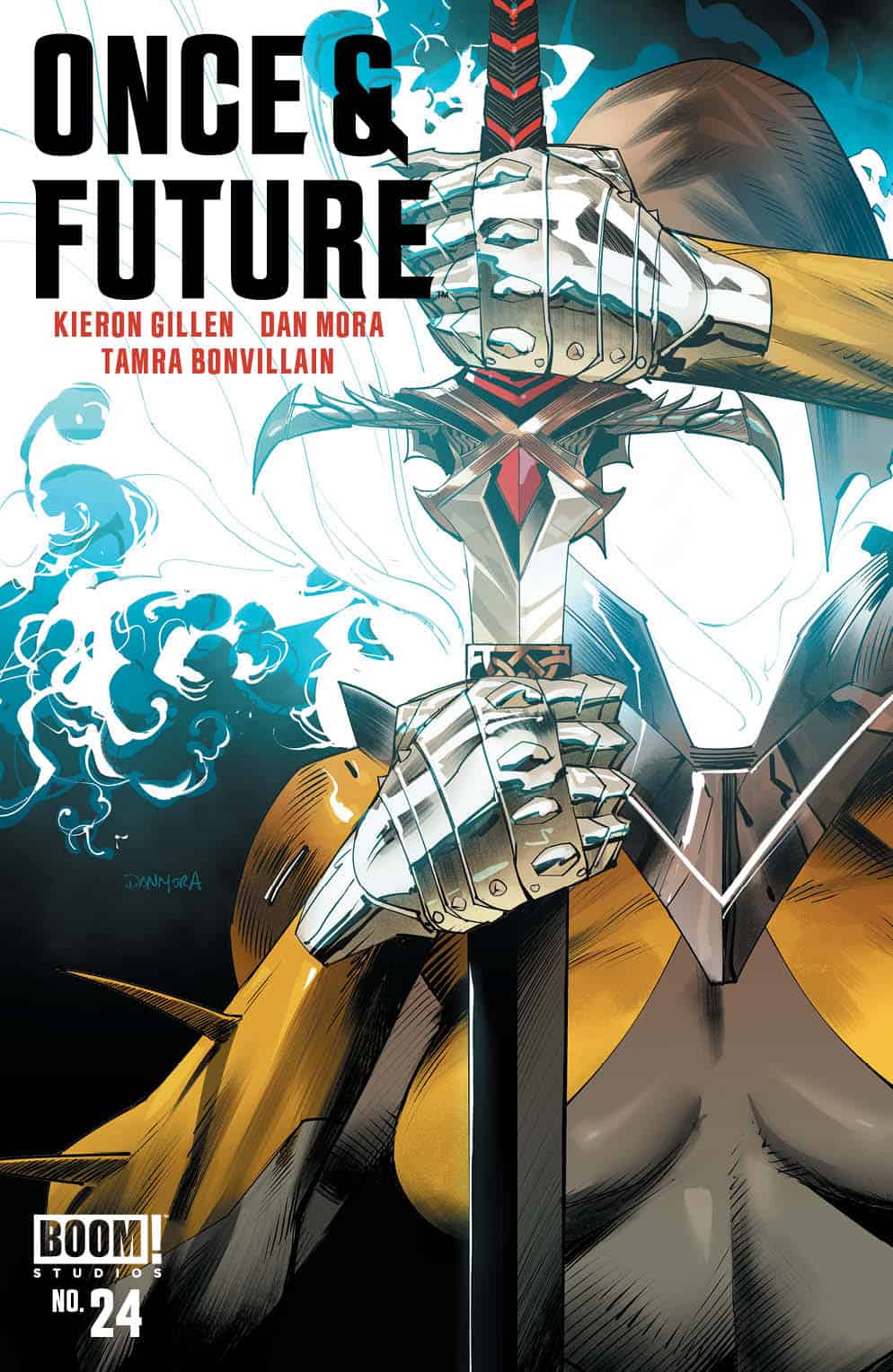 The civil war continues to rage in Otherworld as both Arthurs face off against one another! Meanwhile, Bridgitte and Duncan seek out a secret weapon against their royal foes -- a true man of the people by the name of... Robin Hood.

Myth and legend have a malleability that’s seldom discussed in pop culture. It’s ever-present, the way in which one story of King Arthur doesn’t match another, depending on a specific translation or region. With Once & Future #24, Kieron Gillen tackles that flexible nature of mythology by setting various interpretations of the once and future king against one another like they’re protagonists of a Marvel crossover event. Gillen’s interpretations of Arthur are rendered perfectly by artist Dan Mora and colorist Tamra Bonvillain and lettered by Ed Dukeshire.

Gillen’s scripting is as tight and meta as ever, continuing the exploration of how internal stories warp and interact with the narrative of the book. The book’s meta-commentary has shifted to an exploration of interpretations for myths and stories, and how they can compete with one another. In a book that’s plugged into the clash of identities in current Britain, it’s fascinating to see Gillen tackle how that spills over into the various myths that the country purports to claim. For a myth that has permeated across England, Wales, France, and various subsets of the regions, there is a spectrum of what Arthur stands for and represents to the various audiences.

Even in that philosophical conflict between myths, Gillen never loses sight of the anchor of the story, specifically Duncan, Gran, and lots of bombastic action. The Gran and Duncan plot picks up on their travels across the history of Shakespeare and his involvement in the stories of Britain. The Leer lead washes out and moves into their next plan, using the quill of Shakespeare to track down another myth that transcends cultures while remaining deeply rooted in the national identity of Britain, Robin Hood. The reveal is a solid twist but the real treasure of the Robin Hood introduction is Gran’s summary of the archer. When discussing the plan to rope Robin Hood into their plan, Gran remarks “If he kills us, he’ll go on to cause merry hell for the Arthurs too” indicating the high-wire the group is walking into, fleshing out the extremely chaotic nature of the group’s plan to defeat Arthur.

Mora’s design work is inspiring in this issue and feels like it has only improved thanks to his time working on DC’s superhero books. The issue sees him rendering three different versions of King Arthur, each with their own fixtures that feel similar but vastly different all at once. The contrasts of those various designs call to mind the announcement of Mora’s art for the upcoming Batman/Superman, where iconic characters can exist across time. It’s a fascinating progression seeing Mora oscillate between mainstream superheroes and larger-than-life mythological figures. In a time where superhero movies dwarf the knight tales chronicling King Arthur, Mora can embody both with the same timeless aesthetic.

Mora’s designs are only as good as the colors that are paired with them, and Bonvillain brings her A-Game as always. There are subtle echoes of reds in the various Arthur designs from the mangled flesh of the main Arthur, to the red patterns of the imposter, and even the red gem accents of the flashback Arthur’s armor. The color motifs of Arthur and Merlin are the most apparent in the issue and play to Bonvillain’s deft hand at enhancing the story without taking the audience from the art and story. Her colors are always ethereal and feel otherworldly in the book, heightening the reality of the world where various Arthurs can duke it out.

Once & Future #24 feels like a myth wrapped in a story in a bulletproof vest. Gillen is clearly interested in tackling the clashing identity of Britain through the lens of a literal Arthurian civil war. Working hand in hand with Gillen’s ambitious meta-discussion, Mora and Bonvillain do next-level work making each interpretation of Arthur feel unique while still being based on a shared foundation. The symmetry that the three establish across the book is a stunning case of creators working in perfect sync and only proves this book is one of the best on the racks.