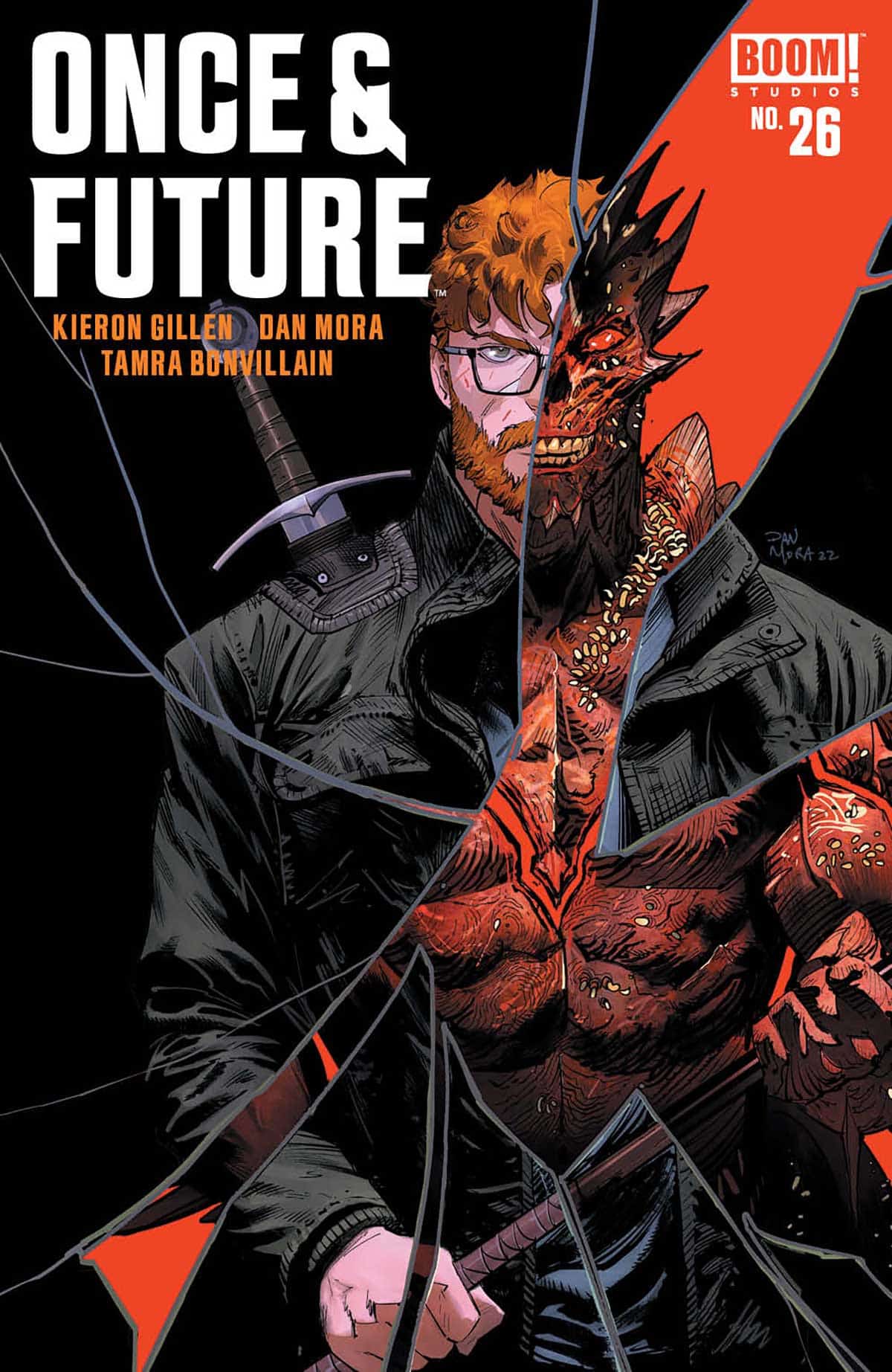 It's the day after Christmas, and as the kings converge on the mythical sword, Bridgette McGuire's true plan comes to light!

Everything hinges on her ritual and who it could release!

A storm is brewing... Who will make it through the end of the year in order to set things right?

Adapting and building a story out of a mythological framework is a solid method to anchor a narrative in something familiar but malleable to readers. It’s the reason why there’s a King Arthur reboot every couple of years, or a megahit book series like Percy Jackson, or the multiple works that tackle Norse mythology across screen, page, and console. The creative team of Once & Future, writer Kieron Gillen, artist Dan Mora, colorist Tamra Bonvillain, and letterer Ed Dukeshire have proven the series is comfortable to not only work in the fluctuating versions of respective mythology but take a step further and reveal how those various myths can blend and feed into one another, creating an entirely new and innovative way to bind aspects of culture and story. The book, which is already a mash-up of genres, decides it needs to be the mythological version of a Voltron and builds a master plan out of separate elements of Arthurian and Greek mythology, Shakespearean literature, and British folklore.

Issue #24 knocks the pieces into place for Gran’s mythology melding solution to all of Britain being trapped in the Otherworld. In essence, the plan is for Robin Hood and his Merry Men to slow down the warring Arthurs, along with Leir creating storms that help to disrupt the battles. Meanwhile, the group will head back to Bath and use its connection to Hades (the Greek Underworld) to divert the River Lethe, which according to myth, causes those who bathe in its waters to forget. From there, the storms created by Lear will pick up the water from the Lethe, and bathe all of Britain, causing them to forget the existence of Arthurs, monsters, and Otherworlds. This should allow the country and everyone in it back to its rightful place, and circumvent the looming threats of the Green Knight and the Dragon, for Rose and Duncan respectively. Gillen’s script quickly reveals this plan as a bit of exposition from Gran to Duncan and Rose after traveling the Wastelands, and it moves effortlessly across two pages.

The most shocking part of the reveal, which Gillen’s script calls out, is Gran’s willingness to share the plan in earnest. From this page, it felt like a shoe was going to drop off the other foot, and a piece of the plan was being withheld, but Gran makes it clear that she’s giving the whole picture for once. It’s an excellent little beat that shows just how much the group dynamic has shifted across the series, and just how much Gran specifically has grown. Between sharing this and letting Duncan and Rose have their quiet date night, taking place months later as the group has been working with the Merry Men and trying to survive so that they can enact the plan. Gillen’s script in the previous issues has given that spotlight mostly to Duncan and Rose’s growth, as they’ve hardened and adapted to the reality-bending roles that come with the myths, but by centering the focus on Gran in this issue, it gives a refreshing moment to breath before the next big conflict build. Which, by the last page reveal, is going to be both big and full of conflict.

Mora’s art also reinforces that growth for all of the characters, showcasing the time jumps in the designs of the main trio. After Gran’s explanation of the plan, and an amazing interpretation of Robin Hood literally growing from the land, the story shifts to the Elaine and Grail Castle, and when it returns to the A-plot, months have gone by. The page starts with a caption box indicating time passing, but even if that caption was removed, the art and design work would convey the jump. Mora gives both Duncan and Rose more wear and tear in their clothing, and everyone’s rocking new hairdos. It’s a little touch that Mora wonderfully renders, and is a selling point of a singular artist on a book. As time passes in the context of the narrative, Mora gets to tweak and evolve the various designs of these human characters, which sit in direct contrast to the static, but different interpretations of mythological figures. Mora’s art is refined thanks to Bonvillain’s breathtaking colors, specifically in those tweaked designs. The palette of Otherworld clashes against the more slightly muted and worn clothing of the group, and that contrast is evocative of the way these characters have grown while the ethereal world around them has stayed roughly the same.

As Once & Future barrels towards Gran’s endgame for escaping the Otherworld and dealing with the Arthurs, the changes to the core trio of the book; Duncan, Rose, and Gran have only become more apparent. That growth is clear from Gillen’s scripting, Mora’s pencils, and Bonvillain’s coloring. Obviously, these characters will forever be changed by their time trapped in the Otherworld, and how the various myths have affected them all. It’s nice for the book to take a stop between big battles and reward longtime readers with this insight into character, and give the creative team a chance to flex the long-term, serialized storytelling muscles. The little beats give a second wind for what seems to be the next case of mythological mayhem and promise a return to the more chaotic and action-oriented side of the series.