Once & Future #27: The Sniper That Chooses 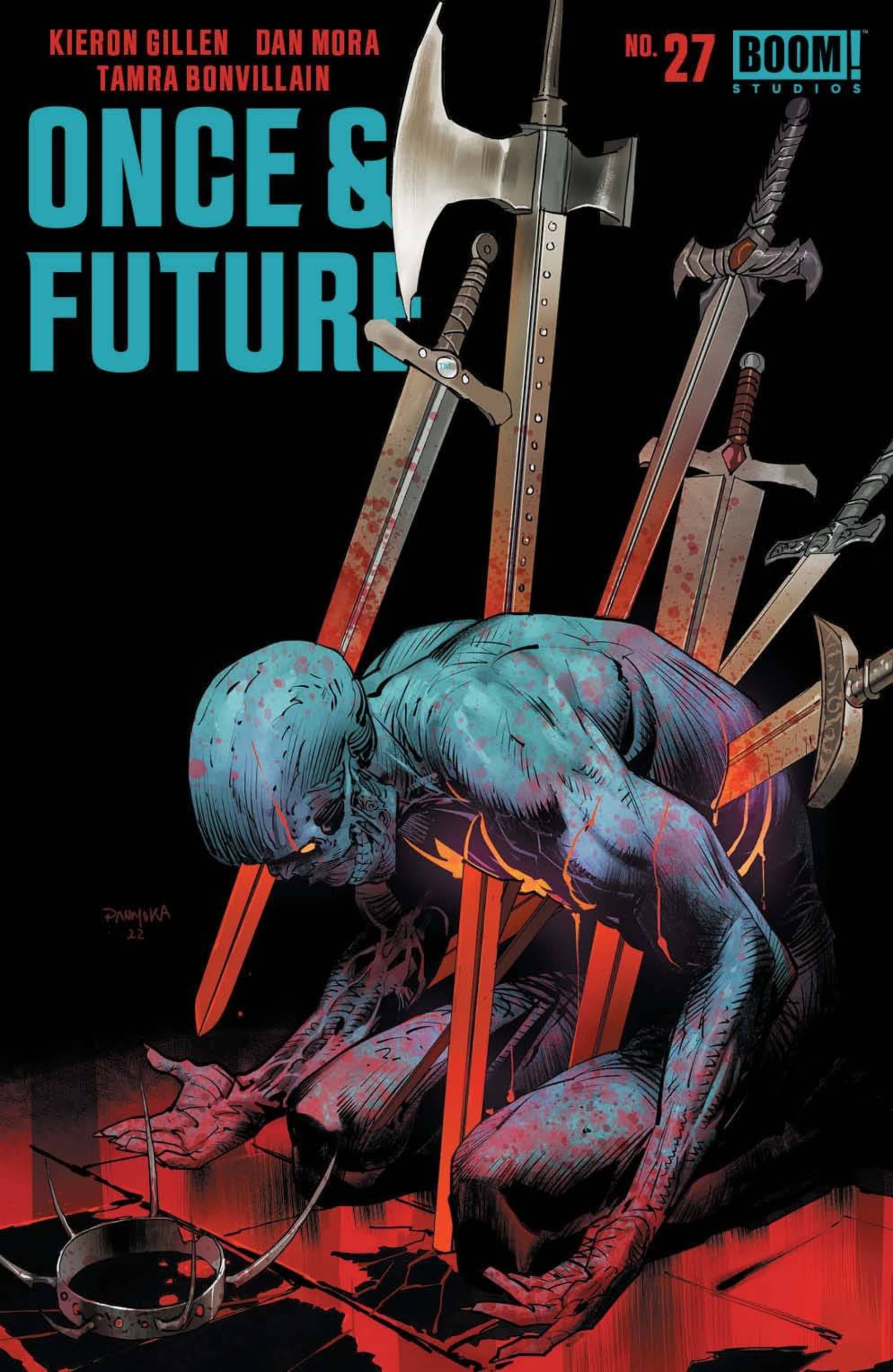 What happens when the fabled sword appears, but no one is able to pull it out? Is this peace finally the result of so many hard-fought battles?

Perhaps, but an unexpected claim to the throne is lurking, closer than Bridgette and Duncan can imagine.

The most interesting part of quest narratives is seeing the hero reach their desired object, and be granted a boon but also see something sacrificed or lost in the pursuit. It’s like a narrative version of the conservation of energy, which explains that energy cannot be created or destroyed, only transformed. In a sense, a character doesn’t lose and gain something when finding the Grail, or the magical sword, or sacred relic, but instead experiences a change. For that change, the item is more a catalyst and less a boon, and any good story lays clear what is being exchanged in that conservation of character. Once & Future is a story that’s all about the tropes of quest and heroic literature, and an examination of the power that stories and those tropes hold, and makes clear that conservation is always present, even for representative figures of stories themselves.

Once & Future #27 from scribe Kieron Gillen, artist Dan Mora, colorist Tamra Bonvillain, and letterer Ed Dukeshire continue their epic clash of King Arthurs, picking up from last issue’s cliffhanger of the Sword in the Stone returning to England. As the legend goes, whoever pulls the sword will be recognized as the rightful King of Britain, and could put an end to the warring Arthurs and establish one branch of the mythology as the dominant. With what Gillen has revealed about each version of Arthur, it’s clear that none of them should take that position, and does wonders to escalate the already reality-spanning stakes of this bonkers book. Gillen’s story has a seemingly Sisyphean narrative structure, in which it continuously keeps pushing the story into climax after climax, in a way that puts other serialized fiction to shame.

But Gillen doesn’t dump all the book’s skill points (to borrow a metaphor from his other recent creator-owned series) into just the A-plot and the external stakes. This issue reminds us that Gillen plays the long game with his scripting and his B-story revolving around Elaine and Gallahad trying to obtain the Grail. While having worked as a double agent and force of chaos throughout the story, Elaine gets honest with the current Lancelot, explaining to the manifested story her reason for pushing Gallahad to reach the Grail. She’s come to realize she just wants her son back, to be free of the story she’s used to literally burden and twist the man into. Like any good quest story, however, reaching an all-powerful item such as the Grail has a cost, and while she gets her wish to see Gallahad return to his true self, it ultimately ends in heartbreak. It’s an emotionally resonant scene that propels Elaine into a new mission and the arms of Bridgette and allows for an excellent callback to the last time daughter sought out her mother.

It doesn’t feel like a reach to say that Once & Future is more than just a story about the power of stories, and how they can shape the world around them. Over the last few issues, a theme of how stories and traditions shape generations and inflict trauma has emerged in crystal clarity. One has to look no further than the state of the relationship between Duncan, Elaine, and Bridgette. The burden of Arthur, and the entire weight of all That trauma, no matter how much the three rebel against it, will always be a part of them. That ingrained pain and hurt can’t just be forgotten or washed away, which on a meta-level makes Gran’s plan from the last issue seem doubtful to work, at least on the core cast of characters. In the end, Elaine only turns to Bridgette when that pain and trauma reach a threshold, and the catharsis she needs is to punish the stories themselves. It’s a brilliant move to position the book’s themes, and once again works as a perfect way to pivot to the next chapter of this story.

If Gillen is linking those generational pains through story and plot, then Mora is getting to do so in his art. That callback referenced before works purely visual, as the last two pages of this issue work almost beat for beat with the previous encounter between Elaine and Bridgette. There’s still the distance of Bridgette looking through a sniper’s scope by the beginning of the exchange, but this time, Bridgette closes the distance, and Elaine can cling to her mother for support. It’s a touching moment that Mora’s pencils infuse an entire history of sadness and conflicting emotions. A little detail that makes the moment feel all too real is Gran’s targeting dot on Elaine’s forehead. As the panels progress from cautious anger to empathy, and Brigette lets her guard down, we see Elaine again, this time without the target. That little dot across seven panels, and works as a perfect progression of image and emotion.

Mora’s panel composition skills are on full display in the other plot as well, using the broken boundaries of multiple images to convey the rapid action of the issue. Towards the climax of the book, which sees the various Arthur warring for a recently returned Sword in the Stone. The page is bisected horizontally, with the top half being a scattershot view of a chaotic battlefield. Mora positions Duncan and his weapon as the subject of the page, and as he fires, the other panels form like shards of broken glass. It’s a powerful composition choice that represents the jagged, kinetic, and chaotic feel of a good action sequence. As discussed in previous reviews, good action should have a rhythm but still be clear. Here, Mora does this perfectly capturing that feeling while still making the visuals easy to follow.

That clarity, in both the action and the emotional scenes, comes across largely thanks to Bonvillain’s coloring. Her choices in the sequence in which Galahad obtains and drinks from the Grail are particularly stunning, working in perfect tandem with the emotional arc of the plot. The ethereal, otherworldly greens, combined with the signature color dots filled with yellows and blue give a moment of joy as Elaine can see her son’s true face, but as the hopes are dashed, so are the colors. The background fades to black, before ending in a scene of Elaine cradling the body, the vibrant reds of blood splashed against black and pinkish-purples of light from outside the Grail Castle. The progression of color marvelously matches the emotion of the writing and art and heightens the emotion to a new level of heartbreak. It’s no wonder that Elaine seeks out Bridgette, and the red of Gran’s sight echoes Galahad’s bloodstains.

Once & Future #27 continues to be one of the best books on shelves across both the big two and independent publishers, with the entire creative team working together on a level that exceeds any of their other works. That isn’t to disparage Gillen’s writing at Marvel, Mora and Bonvillain’s DC collaborations, or Dukeshire’s letters in Seven Secrets. It’s just this team working with these characters, and this material, across a significant amount of issues, that feels like a special kind of alchemy that’s incomparable. Even at almost 30 issues in, this series has something for everyone and should be jumped on by new readers immediately.

Once & Future #27: The Sniper That Chooses