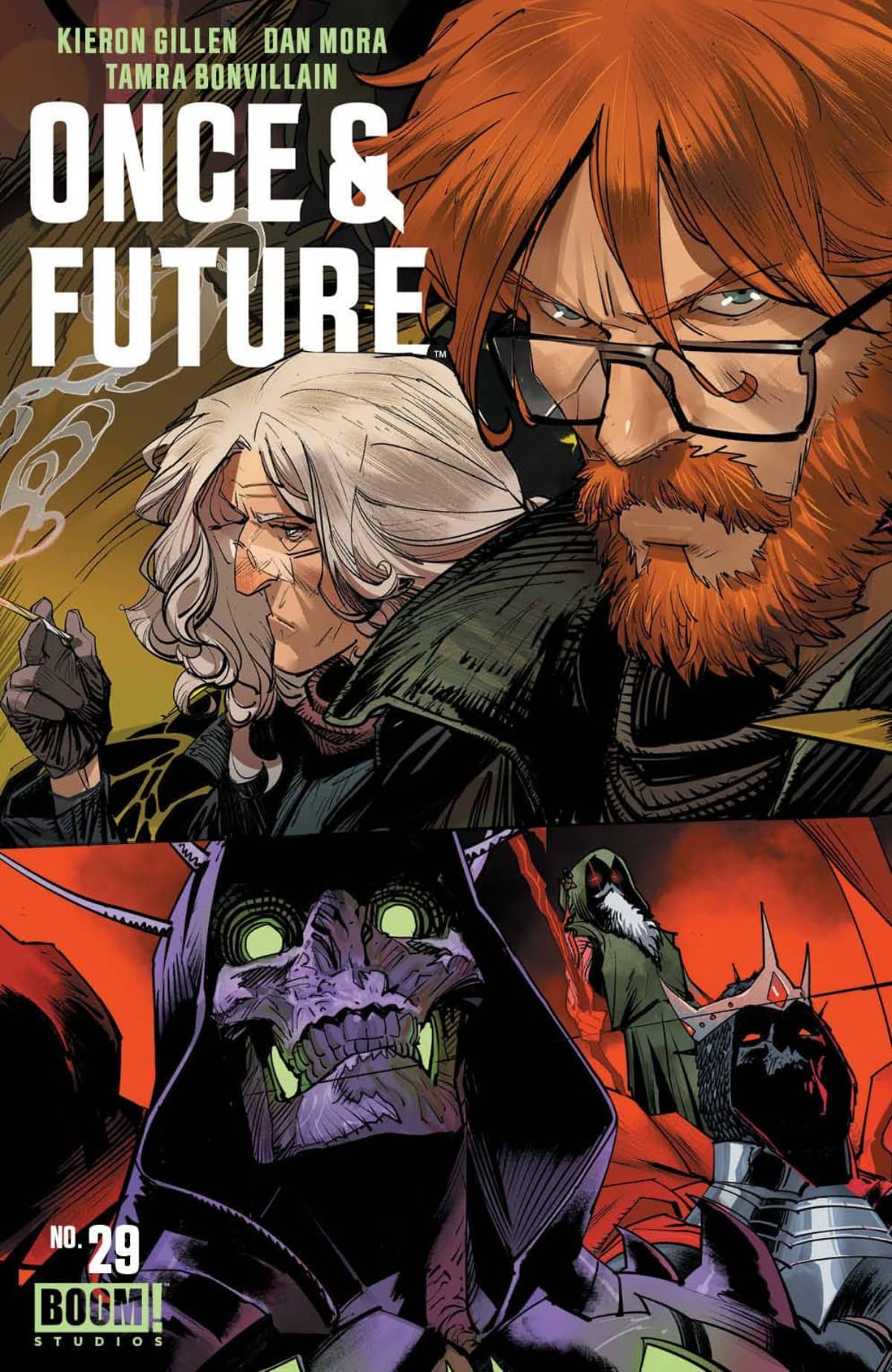 Kieron Gillen and Dan Mora's bestselling fantasy epic is nearly complete, and it's all been building to this! In the penultimate issue, Mary and Bridgette will need all of the help they can get to defeat Arthur's greatest weapon... And with all of the remaining contenders vying for ultimate power, there's just no way of telling who will come out victorious!

Narrative shapes and patterns are plain-out fun. When a story echoes its themes, or foreshadows a pivotal moment, harkening to previous plot points or character decisions, is when a story is at its best. For as much as it has become a joke, there’s powerful magic in George Lucas’s idea that Star Wars is “like poetry, it rhymes.” Stories, especially the ones about other stories, work best when they lean into that bit of magic and let it feed the narrative engine, propelling the plot and characters to something new, yet familiar. That’s what Once & Future does best at its core. It’s constantly remixing mythology and lore, rhyming its stories with its inspirations, while still creating something new and unique.

Once & Future #29 – written by Kieron Gillen, with art by Dan Mora, colors by Tamra Bonvillain, and letters from Ed Dukeshire – comes out swinging, ready to be an explosive penultimate chapter for the series. The issue opens with Rose’s mother and Lancelot at Galahad’s makeshift grave, honoring the lost son and discussing the role of knights. It’s during their conversation that Rose is revealed to be adopted, and has never been interested in seeking out her birth parents. The detail is important for the story unfolding, as Rose recovers from her splitting pain, thanks to Excalibur’s scabbard. The scabbard in some myths supplies its wielder with invulnerability in battle.

As Rose is backed into a stone after the remaining Arthur kills the Green Knight, the information about her lineage is revealed, making the connection between myth and person. Rose pulls the sword from the stone, and thus is the rightful Queen of Britain. Rose gets a new Arthurian design and quickly dispatches Arthur. Merlin refuses to accept the myth’s death, and bargains with Elaine, offering to bring Galahad back in return for revealing Gran’s plan, which is already in motion. The issue ends with Merlin leaving Rose and the battlefield for Gran and Duncan, taking the form of a dragon to match Duncan’s role as Beowulf.

Gillen’s script is a perfect blend of subversion and straightforward action storytelling. The Rose reveal arises in this issue, hinging on the information we only learn at the beginning of the issue, but feels so in line with the ethos of the series that it feels organic. There’s no doubt or questioning of Rose pulling the sword from the stone, as it only solidifies her arc and reinforces just how much of a badass she is.

Likewise, Arthur’s death and the Elaine betrayal feel just as natural, as Arthur is always destined to die thanks to a close betrayal (Nimue was once Arthur’s right hand when the series began). But Elaine remains stuck in her nature like the stories, offering another betrayal at the mere thought of having Galahad back, throwing away Britain’s future for it. It’s like watching a quilt come together at the end, all the various pieces and seemingly separate sections weave and form the final pattern.

Mora gets the chance to design yet another Once & Future King in this issue, and again he gives the design its wholly unique and stunning look. Here Rose’s design is a radiant gold, incorporating bits of the primary (Welsh) Arthur’s design, but giving it a more regal, softer edge. There are similarities, like in the shape of the crown and the silhouette formed in the cape, but Rose’s armor screams Paladin, or righteous warrior, compared to the harsher and more pagan influence from the Welsh Arthur. It’s curious to think how much of that comes from Rose pulling the sword from the stone, as the blade aligns with her aesthetic, even as the scabbard of Arthur appears firmly in the more Welsh interpretation.

The issue wastes no time in giving Rose and her new design a stunning action sequence, as she duels Arthur to death. Mora’s panel composition for this fight is next level, and the action and power behind the figures radiate off the page. There’s a particular moment early in the fight where the two clash Excalibur and the sword that chooses, with pure energy reverberating across the page.

Mora uses circles of power and lightning to illustrate the might of this clash, giving off series anime fight scene vibes (which is the only medium I think Once & Future could be adapted to at this point). It’s a moment like a bell ringing, signaling the book to shift into one of the most brutal fights in the series. Mora gives the following panels a jagged red edge, mirroring as Rose slashes into the body of Arthur, before impaling him through the heart.

Bonvillain’s colors never feel out of step with Mora’s sudden jump in rendering, the usual palette, and coloring bubbles popping even more than normal. That might partially be due to the knowledge this is the beginning of the end for the series, but in the fight scene between Arthur and Rose, Bonvillain’s use of white and blues feeds into the overwhelming power of the sword clashing.

Her color bubbles in the panel radiate from the two and accent the clashing with the reds that overtake the page as the fight moves from the instantly iconic shot to the gruesome rest of the battle. The bloody red is infectious on the page, and Merlin’s magic uses the same hue when he transports Elaine and himself, contrasting the acidic green and blacks of Hades. It’s a striking combo that encapsulates the style of the book and is just gorgeous to stare out for long stretches.

Along with the striking color in the action sequence, Bonvillain and Dukeshire reinforce Rose’s transformation through her speech bubbles, again working as a foil to the Welsh Arthur. While the Welsh Arthur’s speech balloons are sickly green and shaped like the figure’s twisted appearance, Rose’s balloons shift into a regal yellow that matches her new armor and are given a halo effect. It’s a startling change that sells her defeat of Arthur, the smaller and more dignified balloon cutting through the panel and Arthur’s more verbose dialogue.

Once & Future #29 is a strong opening salvo for the end of the series and promises plenty of action and humor for the last installment. Gran and Duncan’s plan is in motion, they’ve been dealt one last betrayal and have to fight a dragon. It’s the perfect set-up for a conclusion to this bombastic series. With a narratively satisfying script from Gillen, appropriate epic art from Mora, unequivocally elegant colors from Bonvillain, and finely tuned letters from Dukeshire, it’s clear that Once & Future is ready to go out on top, as the definitive Arthurian story of a generation. (Or at the very least, the one with the most badass rocket launcher-wielding Grandma.)