ORDINARY GODS #2: The Snow and Stewards in the Blacklight… 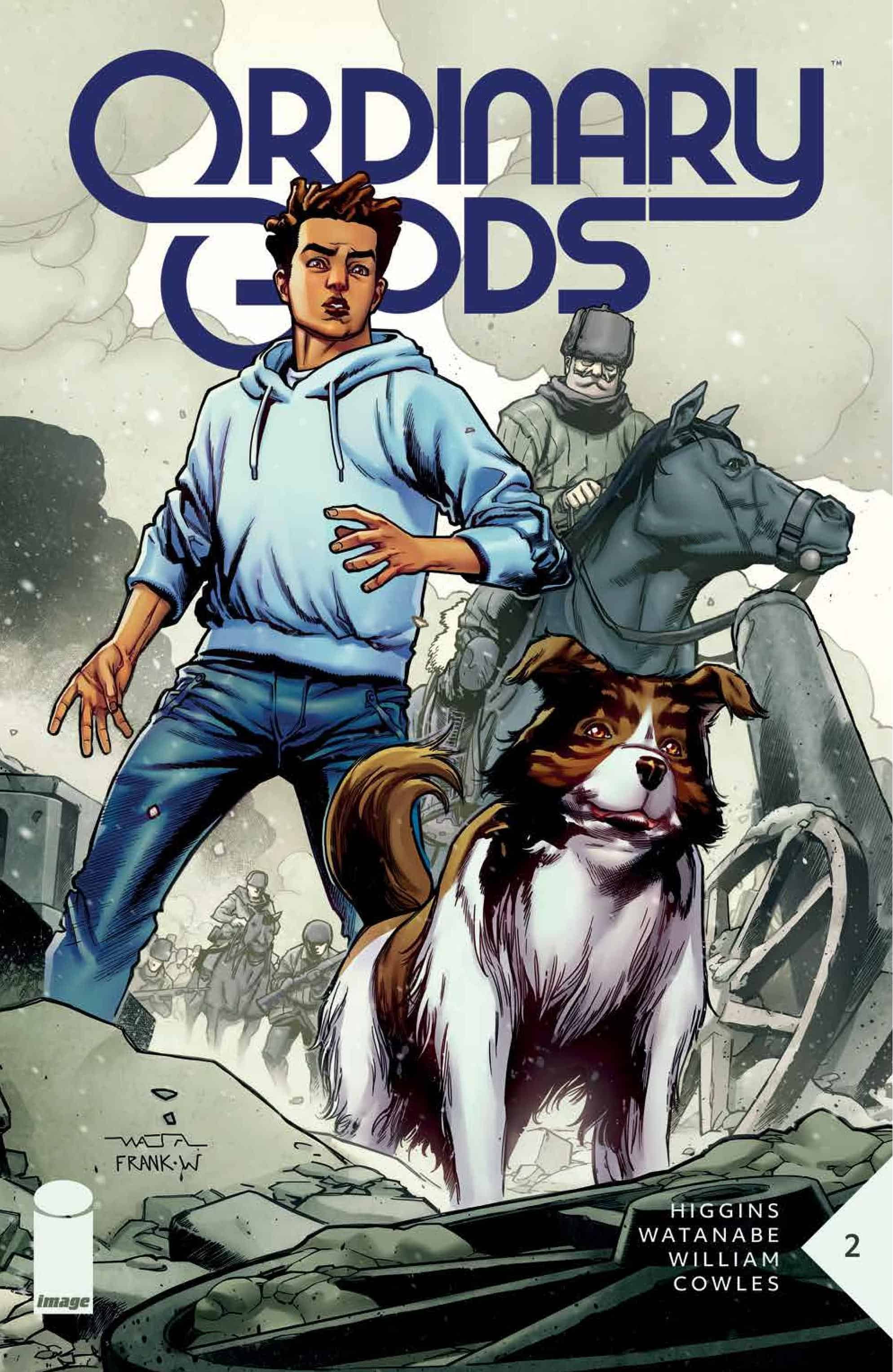 Do you remember the tower? The snow?"

Twenty-four hours ago, Christopher Becker was living a perfectly normal life. Today, plucked from his home, his old life in
ruins, he'll learn the incontrovertible truth about the world and his place in it.

And then he'll remember the tower.

Christopher wakes to find himself in a Reclamation center and has to wrestle with the trauma of losing his family as well as his sister’s violent attack with all the other exceptional and strange truths laid out before him in this issue. Higgins focuses very strongly on Christopher’s almost overwhelming sense of shock and loss of his old life as he struggles with the situation he finds himself in, his distrust of Reclamation, and the dreams of a cold Russian winter… 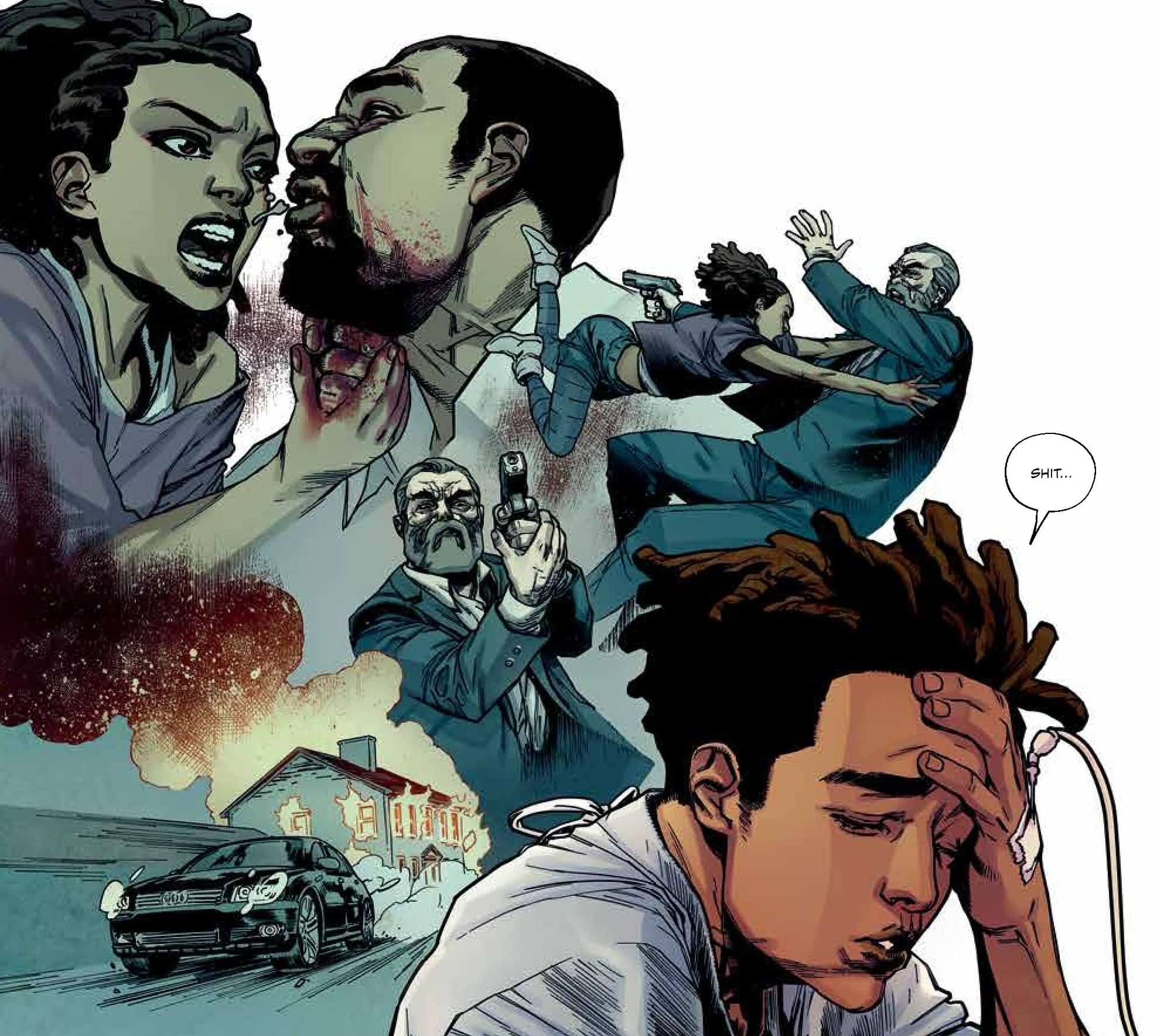 Higgins contrasts Christopher’s struggles in the now with a past life as we learn that the Luminary has been some extremely influential figures in history as memories start to flood back to connect the luminary with the past lives they have lived (I think the cover of issue #1 may be a map to what’s to come in terms of past lives for those interested in a sort of roadmap). It’s an issue full of complexity and doubt as the main characters wrestle with things and that’s for me the best part of this chapter. The complexity of this endless circle of repeated lives. Sareh dying at the hands of Christopher in the cold Russian winter, yet able to look Christopher in eye and say they hold no ill will toward him because of this speaks to the complicated and intricate nature of these relationships that Higgins is painting whose purpose is higher than anyone single lifetime. 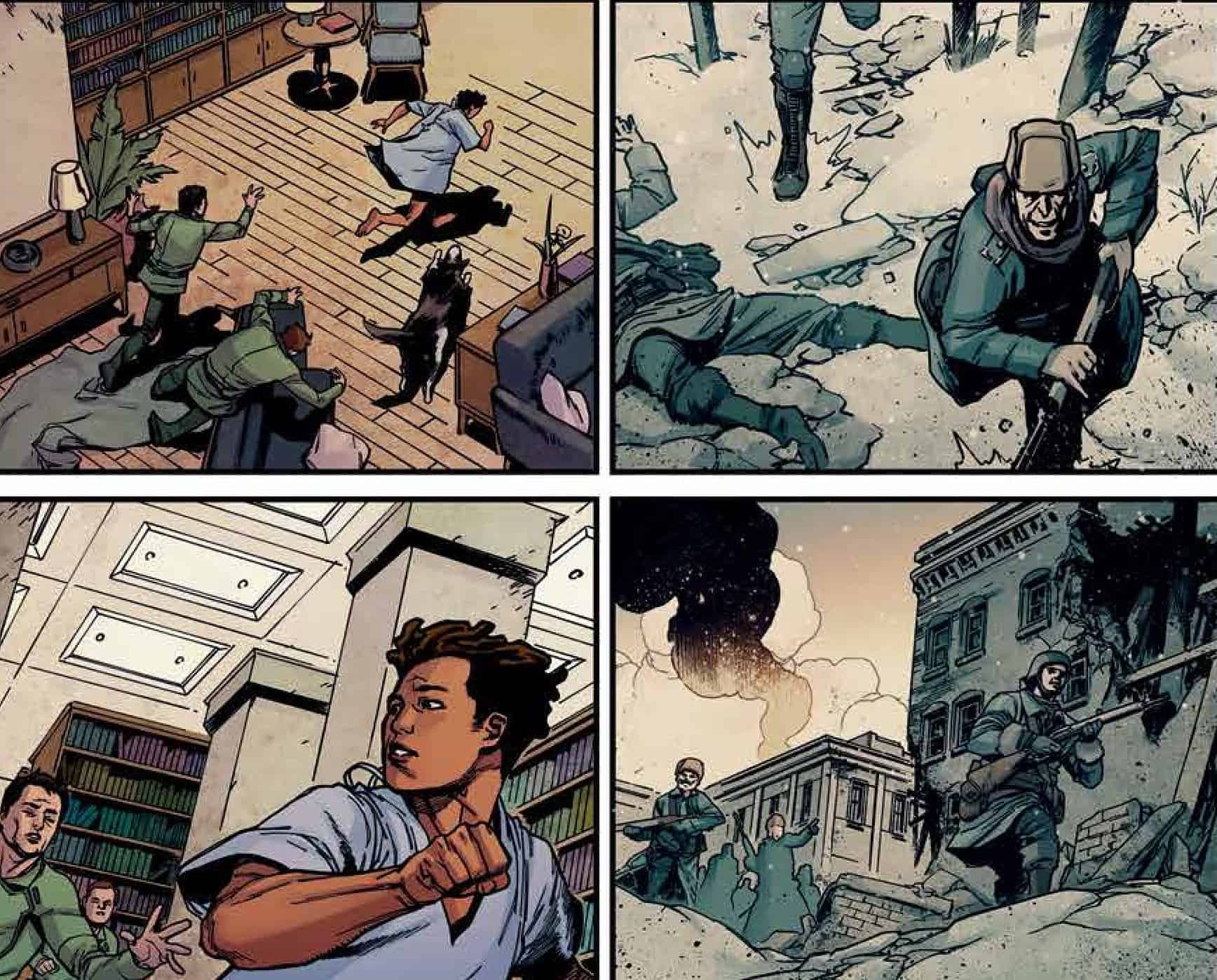 The fantasy/sci-fi elements are still present as issue two not only expands the Luminary’s personal history but also shows us what happened back in the immortal’s home after they were lost and how Dominic came to be on earth and eventually freed Sareh and whoever is inside the dog. Personally, I found myself jumping between this and issue one to see if I could track certain things like when Sareh’s name is first mentioned and which immortal she actually is and I think my one criticism would be that at times Higgins doesn’t directly detail who some of the characters like Sareh and the animal are making it hard to track who Christopher is dealing with but this is small potatoes overall as what’s on page despite not being crystal clear is always engaging and in even riveting like the blacklight scene as we learn in more detail what “Stewards” are and why Christopher’s sister murdered their parents and tried to kill him. 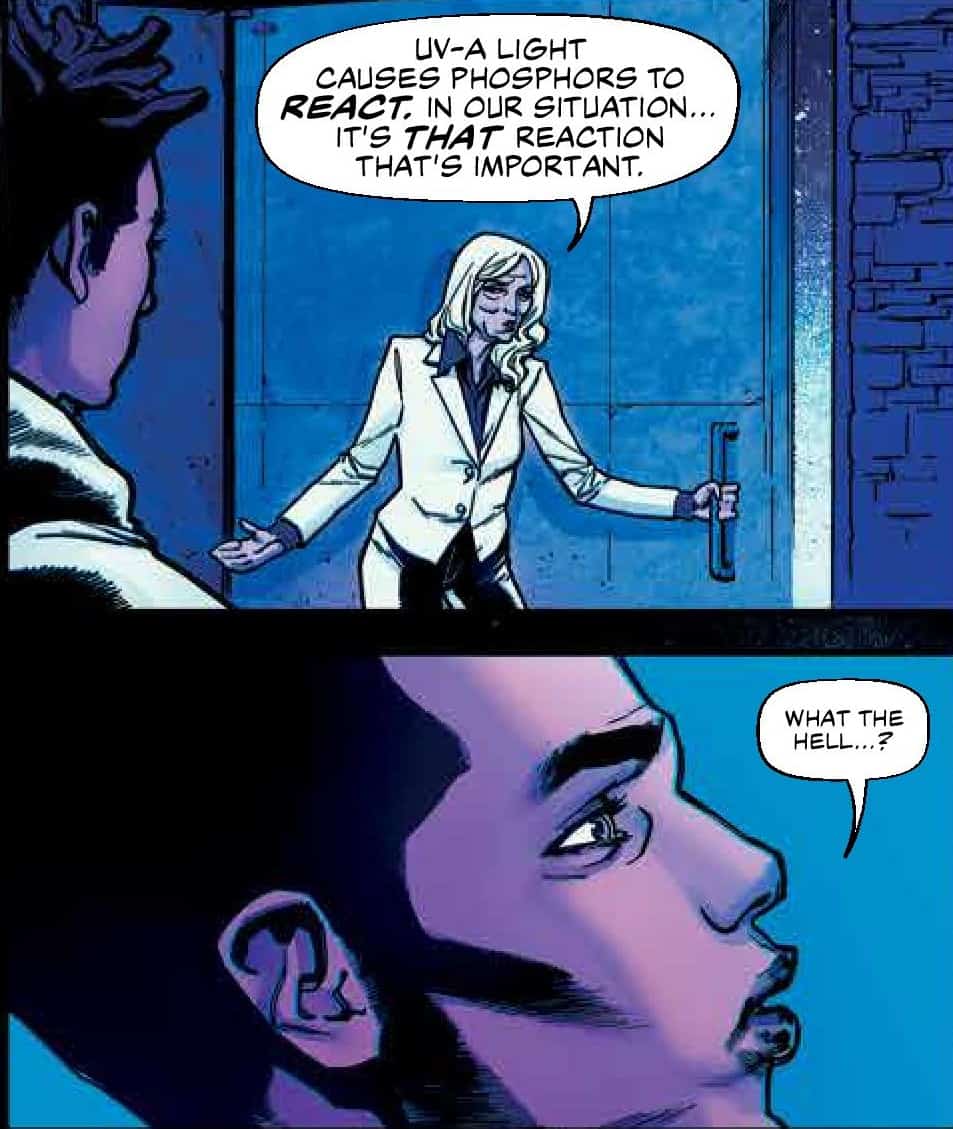 Watanabe and William do a superb job once again using side by side paneling and color to effectively juxtapose the Luminary’s current life with the past life. William leans into a darker duller palette that captures the freezing cold of that Russian winter that took so many lives. The brilliant use of purple, blues and pinks to highlight the use of black light as a break in the more conventional color palette of the issue as it adds a psychedelic additional layer to the very otherworldly scene. The contrast is even present in the cover as the use of color separates Christopher and the Dog from the rest of the scene which is a memory. There isn’t a huge amount of action this issue but Watanabe and Williams never still make the experience as engaging as possible through strong character-focused art that keeps you focused on the characters from start to finish. 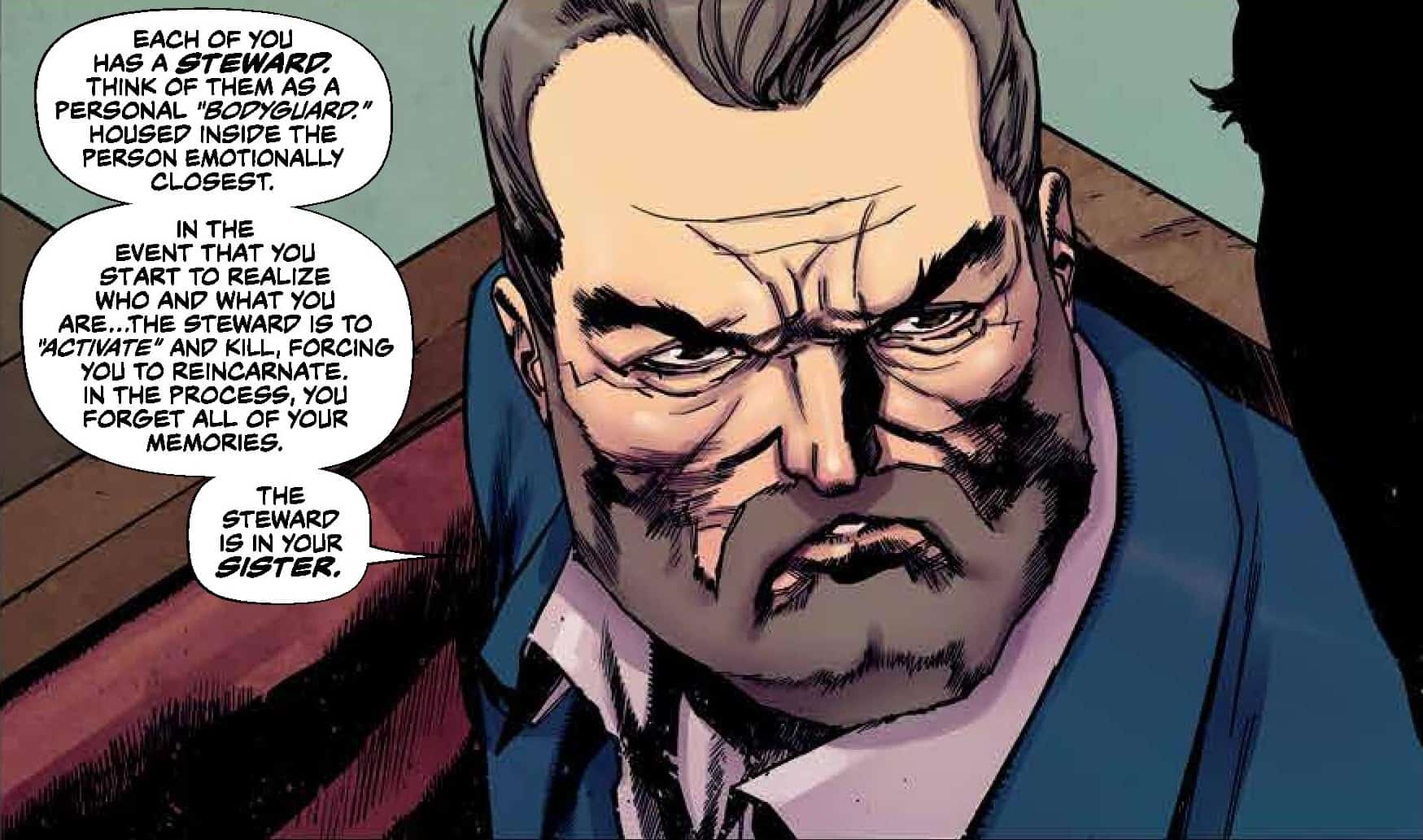 Just like issue one, this issue contains prose back up short. Jana Trooper weaves a beautiful short that speaks to a past life of Sareh’s (I am assuming given the image used) and how she dealt with the visions and memories of her past lives and how it translated into what she did in that lifetime. It’s wistful and sad yet hopeful as we learn of a woman who lost her family to the fever and yet went on to help so many. My main takeaway is that the story is trying to speak to the strength of the character as well as frame some definitive traits related to the original immortal’s character.

Issue #2 of Ordinary Gods slows things down to focus on the main character and how they are dealing with the extraordinary situation they find themselves in. It's a slower paced affair but keeps your interest through cleverly juxtaposed past and present scenes and teasing us with more information about these characters' past and the secret world they come from.

ORDINARY GODS #2: The Snow and Stewards in the Blacklight…