Orphan and the Five Beasts #3 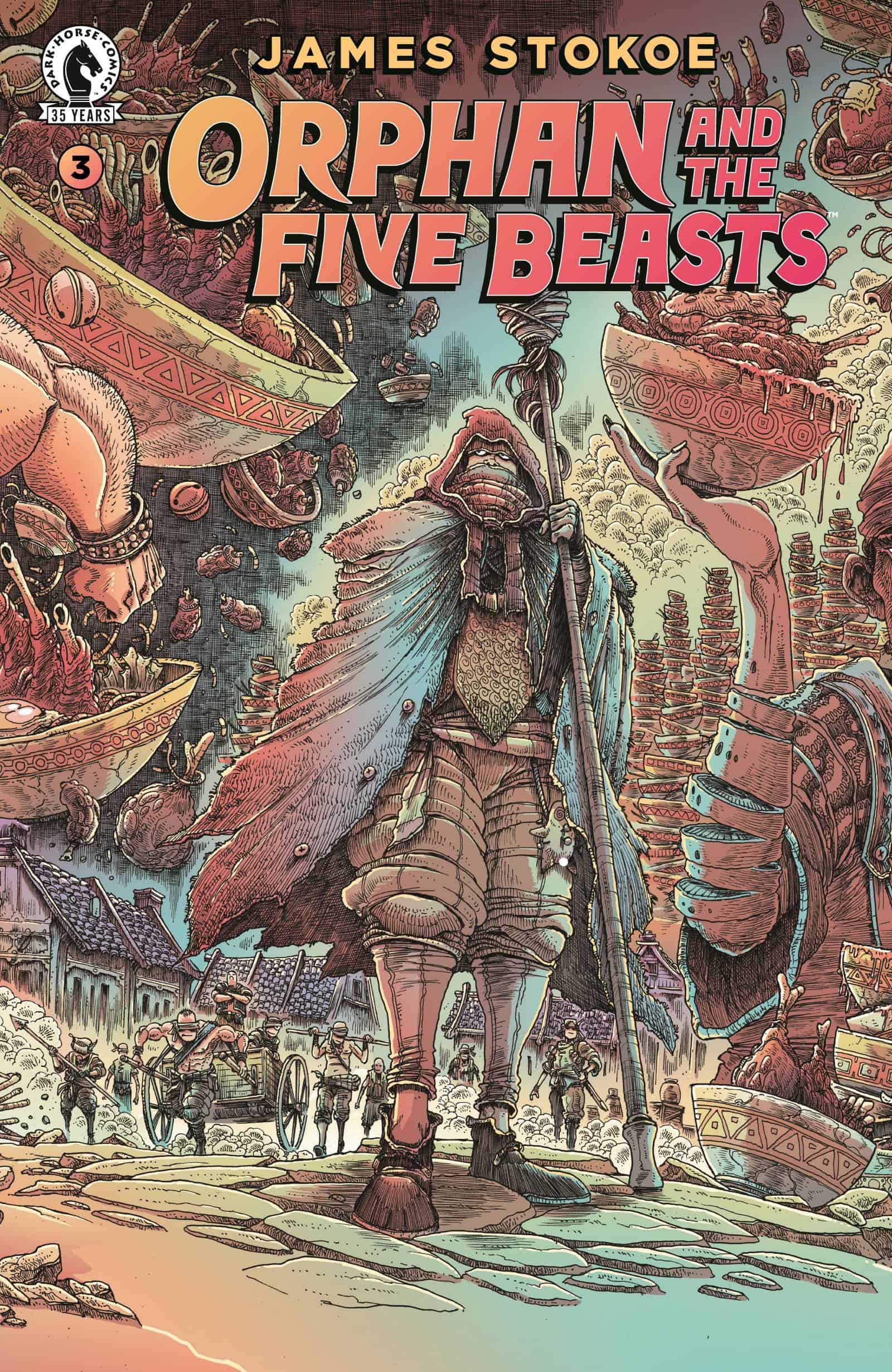 Mo has defeated the monstrous Thunderthighs, freeing the region from his reign of terror! Now Mo is on to the next of the five beasts. In a new town with delectable food, Orphan Mo and her bandits find a seemingly quiet town with a disturbing secret. The next beast is not for the faint of heart!

Those new to James Stokoe’s work, might be thrown off by the delay since issue #2. But, those of us that follow his work, it is just something you get used to. That being said after such a long layoff and the crazy battle that ensued between Orphan Mo and Thunderthighs, Orphan and the Five Beasts #3 was a bit of a lull in the story. I think the delay did hurt it a bit, as this slower issue would have worked better read closer to the second issues pacing and storytelling wise.

All that being said there are some fun story tropes going on in this issue. After the first few pages most readers will see were the story is going, but Stokoe throws in a fun twist with this new “beasts” that is a ghastly surprise. Stokoe plays superbly well with this Kung-Fu/Martial arts tale with his own twist and turns thrown in. Stokoe does a fantastic job o building up tension in this issue. He uses its slower pace masterfully well; drawing the reader in until that final page reveal and wonderful teaser for the next issue.

Speaking of issue #4 and this has nothing to do with this issue per say, but this is listed as a 4 issue mini-series and I do not see how this wraps up in one more issue? Mo has only confronted one of the five beasts so far, I really hope there is a second volume or something.

James Stokoe is one of the best if not the best artist working in comics right now. To use a worn out phrase James Stokoe’s art style is truly like no one else’s out there. You immediately know his work from a glimpse. Full of exquisite detail, you could spend ours looking at one page and what he has filled it with.

Stokoe captures movement and energy masterfully and for a kung-fu epic like Orphan the Five Beasts you could not ask for anymore in a visual display. While this issue is light on the action, Stokoe makes up for it with some dynamic visual storytelling. His character acting and body language for his characters is superbly well done, he conveys the story perfectly in his sequential work. While the characters exaggerated magna-esq facial expressions help bring the characters feelings and reactions to the forefront.

One thing I always look forward to in a James Stokoe comic book is his character designs. With his wild inventive imagination you never know what you are going to get and Orphan and the Fives Beasts plays right into that. As we meet these five “beasts” you wait in anticipation for their reveal and Stokoe plays with that story aspect extremely well in Orphan and the Five Beasts #3, the second beasts is not one you will soon forget.

I think again the delay does hurt this issue a little bit. From a story pacing standpoint this is a little slower issue and it would have played better if it had not taken so long to come out after the second issue.  But, the story itself plays out well with a delightful twist. If you are a fan of old Kung-Fu movies like Five Deadly Venoms, Five Masters of Death, and many others then Orphan and the Five Beasts is a must read. Stokoe pays homage to those films while putting his own wild twist on the genre.