Orphan and the Five Beasts #4 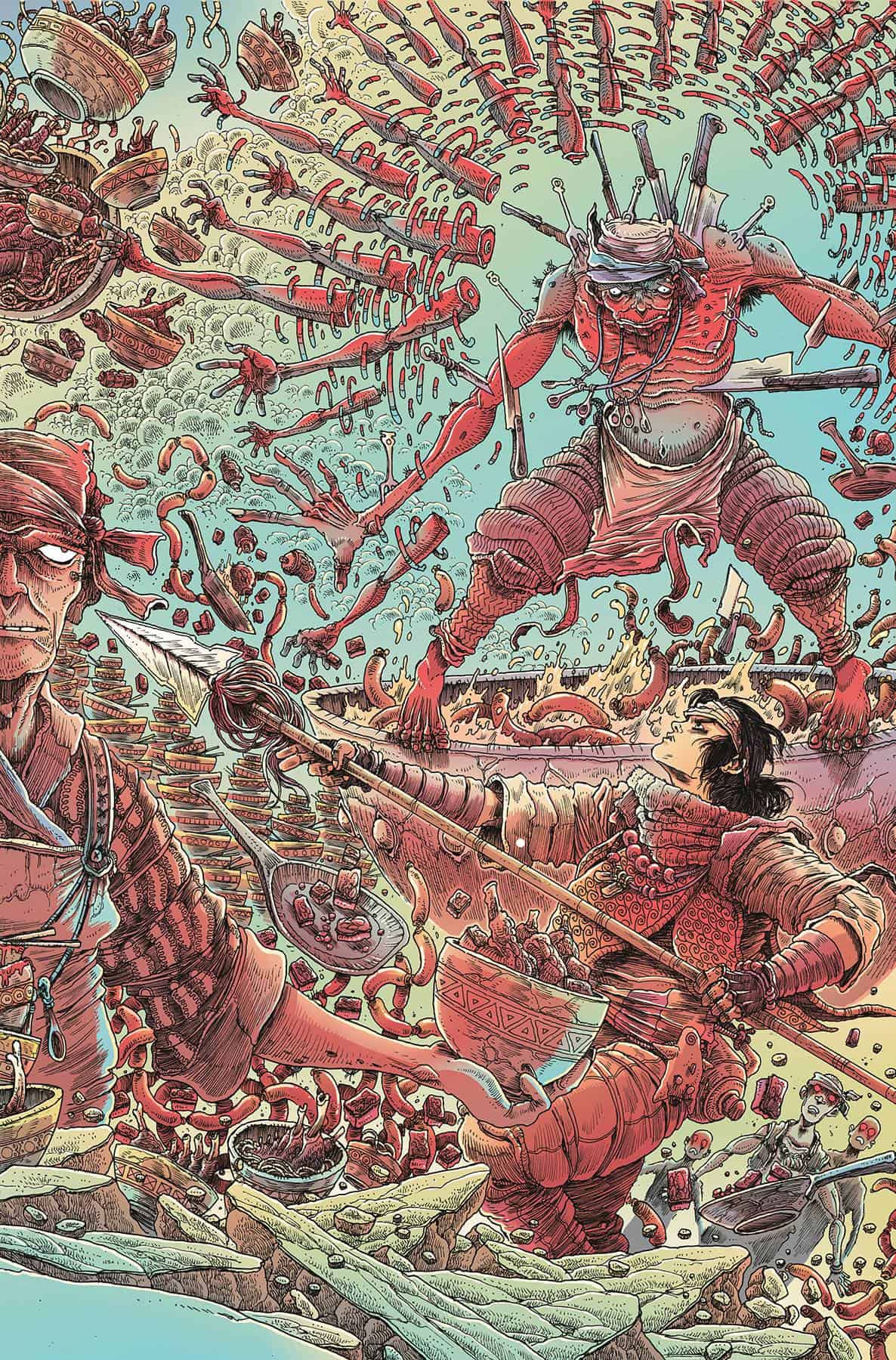 Orphan and the Five Beasts #4 continues the epic of Orphan Mo. She continues to hunt down the five former students of her master, whom have become infected with their demons, reigning destruction down upon the land. Using the unique techniques taught to them by their master to their own gain. Mo has been ordained by the Master to rid the land of his former students these five beasts. Mo has defeated Thunder Thighs and has taken over his bandits, but now in small town something sinister is brewing. Another beasts arises, Chopper Teng master of the “Water Strider Buoyant Fist Style”! Chopper Teng not only is a master of his style but can heal his own arms, going insane he has started cooking delicious meals made of himself for the towns people. Mo must not only defeat Chopper Teng but his mind controlled minions as well!

Everytime I see Orphan and the Five Beasts is coming out I get excited and this issue certainly delivered on the long wait. Like I have said in every other review of this series if you love old school Kung-Fu epics then Orphan and the Five Beasts is an absolute must read. It has everything you could want and more. Stokoe builds up the epic-ness of this fight superbly well through the first opening pages with a tremendous flashback and then lets the fury fly for the rest of the issue. I mean with dialogue like “Orphan Mo! You must free the world from the stain of this beast and introduce him to the roiling fires of hell!” how can you not love it?!

So, I am happy to say I had to revamp my whole review with some tremendous news! Previously from everything I could gather it looked like for some reason Orphan and the Five Beasts #4 was the last issue of the series. The solicit said “the epic conclusion” and the Trade Paperback synopsis said “collects the four issue mini-series”. Which all seemed extremely odd since Orphan Mo has only contacted two out of the five beasts so far and her story was not close to over after this issue. I am happy to say James Stokoe has confirmed via his twitter that yes Orphan Mo is coming back that this is just the end to the first story arc!

That being clarified makes this issue and the pacing of the previous issues make much more sense. I love that Stokoe basically gives the whole issue to the fight between Chopper Teng and Orphan Mo. He choreographs the fight well, while weaving in a dramatic story with it. It makes the battles much more epic and tense when he lets the story flow around them.

James Stokoe always delivers on art. The battle between the Mo and Chopper Tang is all parts elegant, brutal and a little disgusting. I mean the whole concept of Chopper Tang cutting off parts of his arm that he can regrow and feeding it to people is a wild concept and Stokoe delivers visuals on that power that will leave you shaking your head.

With the whole story leading up to the battles against these beasts Stokoe rightly so lets the fight guide most of the issue to visual delight. Stokoe’s manic type styling is perfect for the Kun-Fu epic. Stabs, cuts, punches and kicks all land with an impact you can feel off the pages. Stokoe has that style that brings you right into the fight.

Stokoe continues to be a master of details as well. From the characters clothing, weapons, locations; Stokoe does not skimp on any little detail. There is not a page or panel of Stokoe’s work that you cannot just stare at for a few minutes and find little details you missed.  Those details are what make Stokoe’s work truly mesmerizing and awe inspiring.

If you love those old school Kung-Fu movies then you have no excuse not to be picking up Orphan and the Five Beasts it pays homage to those flicks superbly well, but also puts a twist on them that only James Stokoe could do and that could only be delivered in comic book form. Stokoe’s wild imagination and gleefully bombastic art style delivers a story that has to be seen to believe!

Orphan Mo battles the second of the five beasts. Chopper Teng the master of the “Water Strider Buoyant Fist Style” stands in her way of avenging her master. Can Orphan Mo defeat Chopper Teng or will the wily chef make her taste a terrible defeat?