HELLO FOLKS! Welcome to Comic Watch’s Kickstarter Korner. A weekly look at Kickstarter campaigns that you may want to put some eyes on. We hope you find something you enjoy and back these great campaigns and creators! 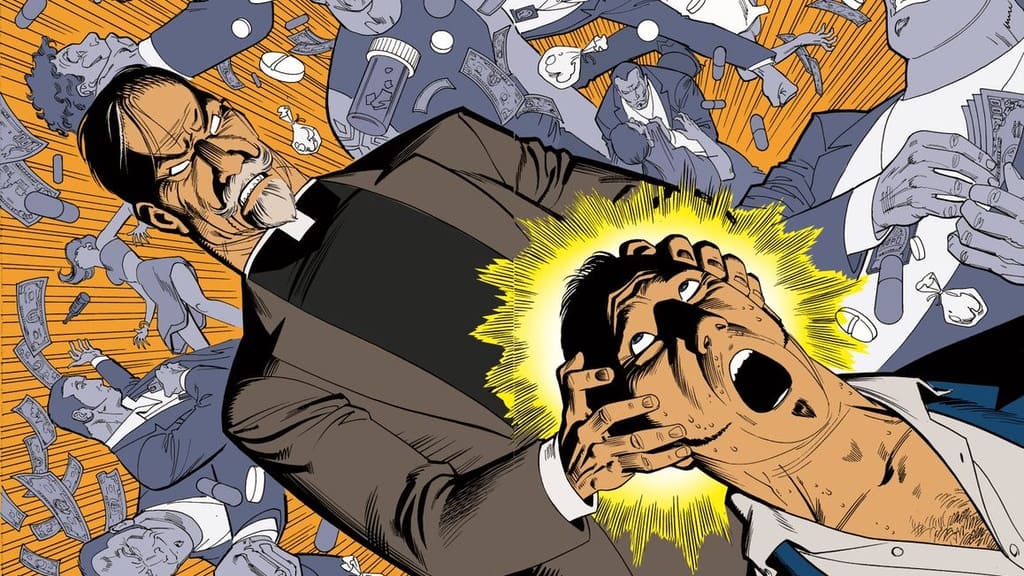 A collection of all issues, art, covers & more of the acclaimed series, drawn by legendary Batman artist Norm Breyfogle.

Four people from different walks of life, all of whom are either criminals or trapped in an unforgiving and unfortunate life… are literally erased by a mysterious Pastor named Secord. Secord, a harsh taskmaster, endows the quartet with powers that are directly related to each team member’s worst character flaw. Winston Fontenot is a dirty, violent, murderous cop with a terrible temper. He is given incredible super human strength. A gangbanging drug addict named George is given the power to shapeshift and become whomever he wants to be. Lynette Story, an addicted gambler and con artist is given the ability to turn back time 13 seconds. A young woman named Magz, a woman who has been trapped in human trafficking and the sex trade, is given the power to control minds after not having had any control for years. Together, these four “BITTER SOULS” are brought together to deal with the ghosts and spirits so prevalent in their home town of New Orleans, Louisiana. The stories are pulled straight from actual myths and ghost stories from the bayou. 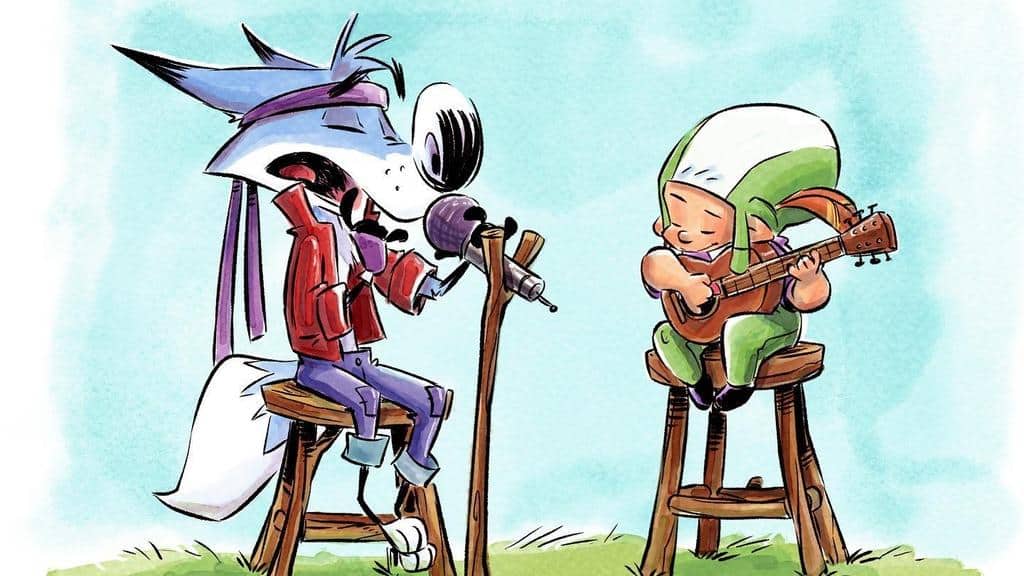 Following the success of FOREST FOLK: Picnics and Hijinks, the first volume of Dax Gordine’s acclaimed webcomic series, RAID Press is proud to present…. FOREST FOLK: Bands and Shenanigans. The ALL NEW second collection of 105 strips follow the shenanigans of Filburt and Thomas, along with the rest of the peculiar cast, including no-nonsense Barry the Bearista, Grumpy Cat Gus, and nerdy Benni the Bunny. Watch as they deal with playful misunderstandings and wacky hijinks during spirited adventures in the forest they all call home. 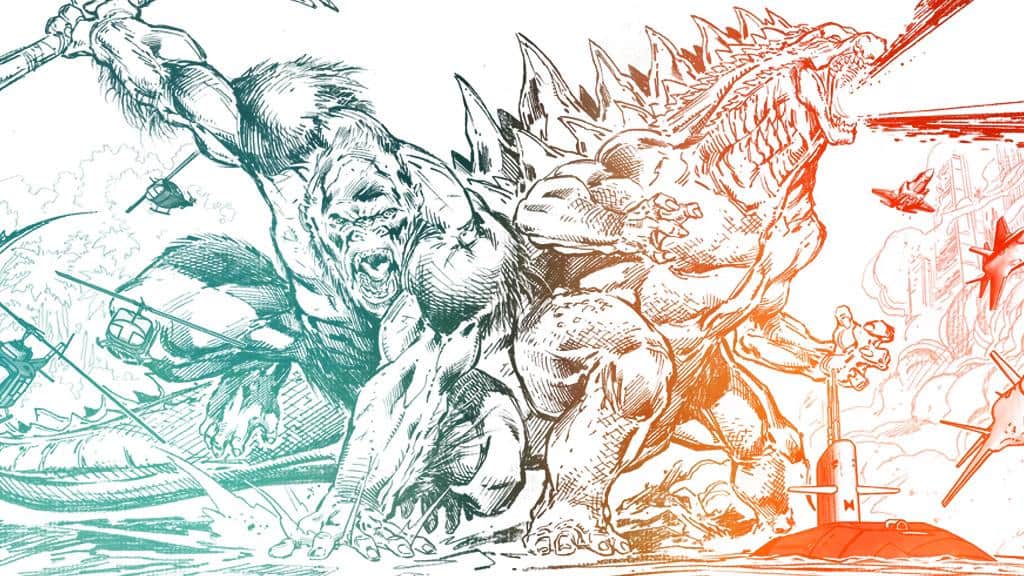 Featuring Over 200 Pages of The Cinematic Art of Richard Bennett.

Richard J. Bennett is one of the most respected storyboard artists working today, having worked with top directors like David Fincher, Christopher Nolan, Brad Bird, and JJ Abrams, among others. This new book showcases his storyboard storytelling with two of the biggest stars in the history of cinema. Godzilla & Kong: The Cinematic Storyboard Art of Richard Bennett features storyboard art from the blockbuster hits Godzilla vs. Kong, Godzilla: King of the Monsters, and Kong: Skull Island. 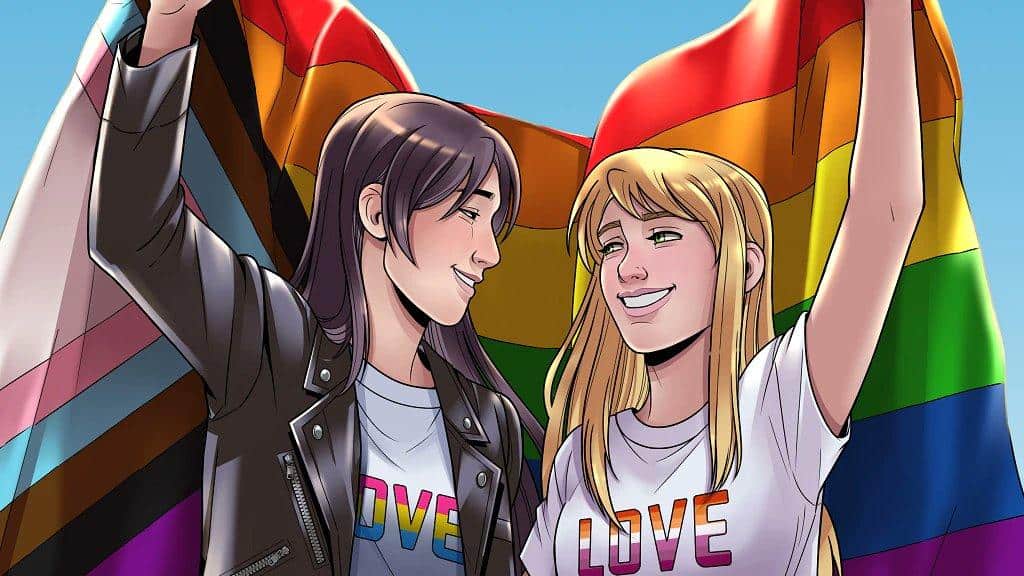 Slice of Life is a queer romance that deconstructs the “slice of life” genre, unpacking the importance of everyday narratives to tell a larger story about the meaning of life from the point of view of a fictional character. Issue 1 saw Yuriko/Lady Vengeance come to life and get her first taste of life outside of a TV show. Issue 2 will see Yuriko and her future girlfriend, Lucy, get to know each other better as Yuriko adjusts to the freedom and uncertainty of real life. Slice of Life #2 will be collecting Chapters 5–11 from WEBTOON in a new sequential format. The 52-page comic book will also contain an 5-page EXCLUSIVE story not shared on WEBTOON/Tapas! The story takes place in the future and sees an older Yuriko and Lucy celebrating their anniversary! 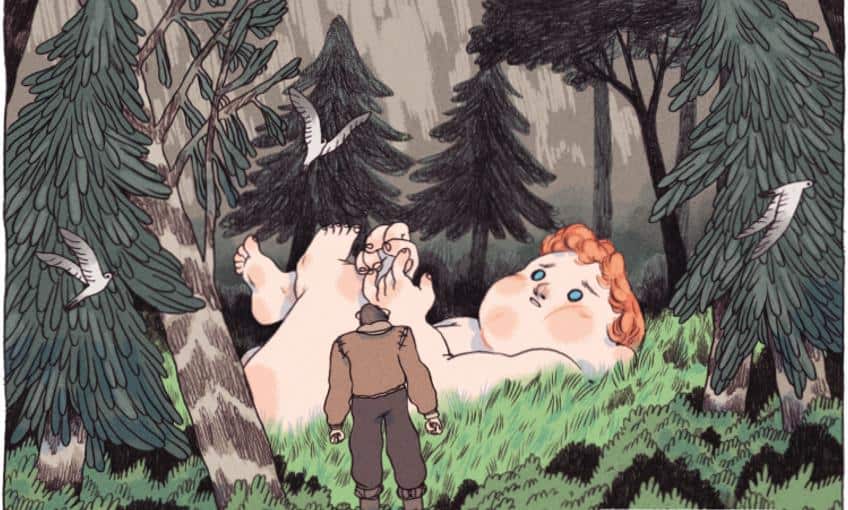 A giant girl’s growing pains are explored in this beautiful graphic novel.

A farmer finds a baby abandoned in the middle of the valley, but this is no normal baby… it is already the size of his horse cart! How can something so big be so helpless? Taking the giant child in, his wife and sons welcome the new addition to the family, whom they name Celeste. Raising a giant won’t be easy but growing up is fraught with its own challenges no matter your size… Author JC Deveney and illustrator Nuria Tamarit weave a super-sized coming-of-age fairy tale about the pains and woes of becoming a woman, scaled to giant proportion. Through many adventures and misadventures, Celeste learns to embrace her uniqueness and follow her own path, despite what society might expect from her.

The Color Guard: The Collected Edition by Ryan Little 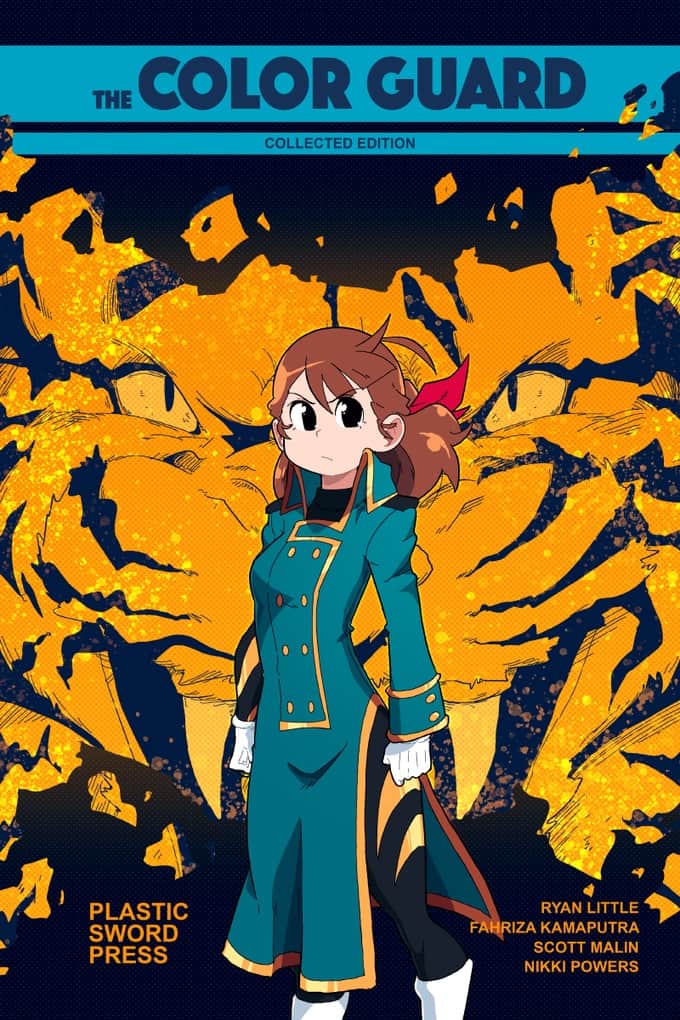 A humiliated flag girl must conquer her shame and carry her banner high to defeat a mysterious evil.

The Color Guard is an all-ages adventure book about magic, flag twirling and, most importantly, shame. It can be hard to proudly carry the banner for the things you care about. That’s why I made a book all about the struggle of facing shame. This series is an adventure with magic, comedy, and some epic battle manga action sequences. But at its core, it’s all about standing up for whatever you believe in.

Head First: Jungian Ogres, a Race with Death, Plus the Jokes by Tim Eagan 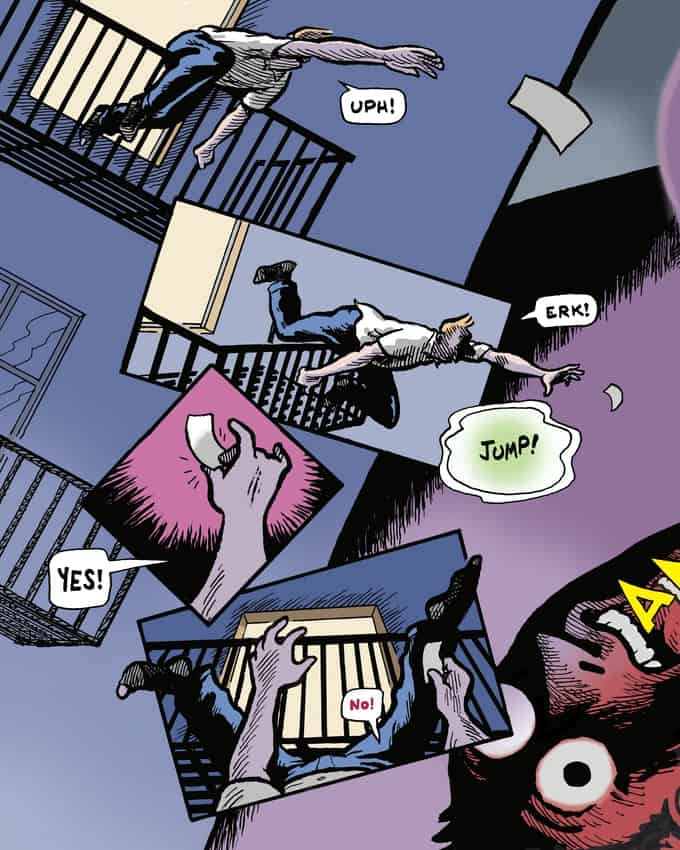 The hero falls off a building. We enter his subconscious mind and join him for the trip down.

Head First starts in the real world, but we soon enter the surreal universe of the subconscious mind — and the phantasmagorical dreamscape of Subconscious Comics. You may recognize this parallel reality if you’ve seen the comic strip. The settings and cast of characters in this universe all come from those 20 years of comic strips. But those strange creatures never had a story like this to stretch out in. And they can do it in full, dreamworld color!  I have been obsessing about this tale ever since the strip went dormant, and now it’s ready to fly. But why take my word for it? 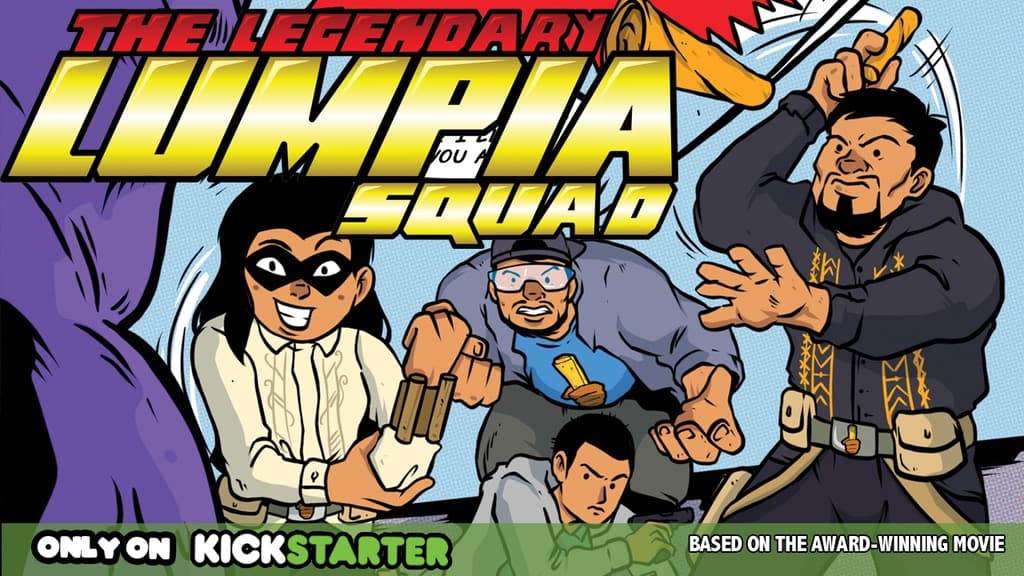 An independent comic book spin-off to our award-winning feature film LUMPIA WITH A VENGEANCE to be released Summer 2022.

Nine years ago, you helped us kickstart our independent movie LUMPIA WITH A VENGEANCE, which won the Audience Award for best Narrative Feature at the Hawai’i International Film Festival and is currently selling out screenings on its film festival tour. Then you helped us again by greenlighting our comic book series. Now with your support, we want to create our next spin-off comic book series: THE LEGENDARY LUMPIA SQUAD! This standard size 24-page comic book will revolve around the new super hero team introduced in the film. 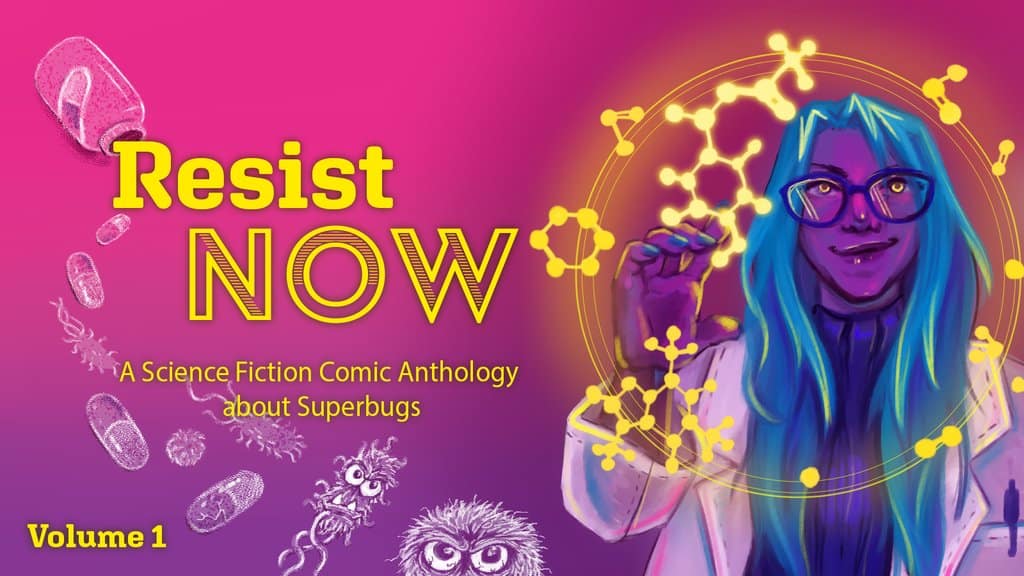 A sci-fi comic anthology about superbugs. A mad mashup of monsters, aliens, science and fantasy!

Ever wondered what it would be like if… Superbugs were as tall as buildings? You could kill space invaders with 8-bit chemistry? Bacteria went on a quest to harness the fantastical powers of gemstones? No? Resist NOW is going to be a 40+ page A5 comic book with at least three different short sci-fi comics inspired by superbugs. Superbugs are microbes that change over time and no longer respond to medicines. The World Health Organization says it’s one of the biggest threats facing humanity. YAY. But rather than focusing on the doom and gloom of this looming problem… We would like to show you that there is a lot to be hopeful about! 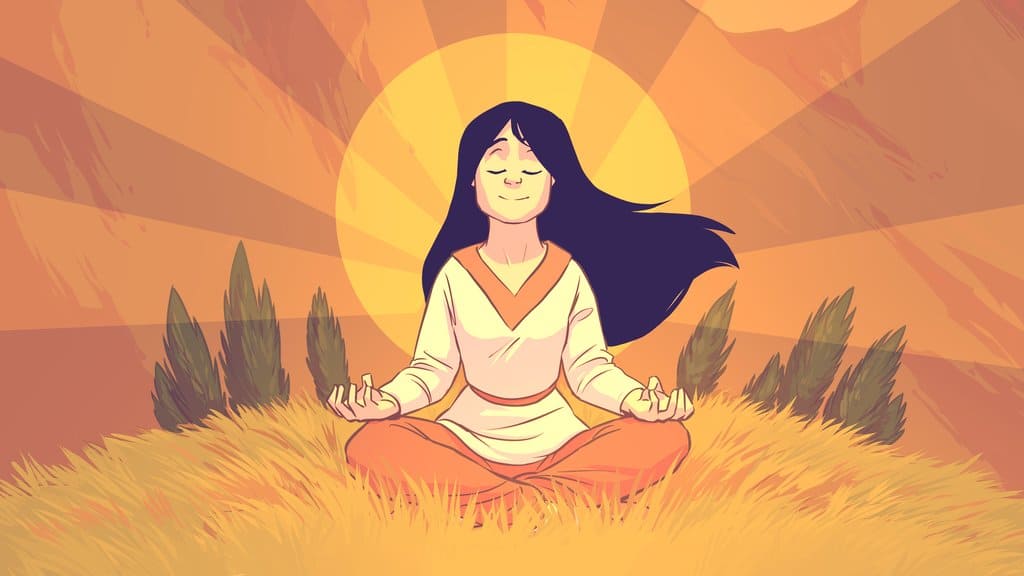 The fantasy adventure webcomic where a zealous princess goes on a journey to find the city of a dishonored goddess.

Her whole life, Princess Wahida has prayed for passage to “Suihira,” the holy City of Water, lost to time and myth. When the goddess Akia appears before her and declares Wahida to be worthy of her city, the zealous princess doesn’t think twice before venturing into the wilderness. However, Princess Wahida quickly finds she needs more than faith to brave the harsh journey. After leaving her father’s kingdom, she is greeted by all the desert has to offer: bandits, liars, and enemies she could have never imagined.