Pantomime Vol 1: We May Be Deaf Kids, We Are Not Helpless 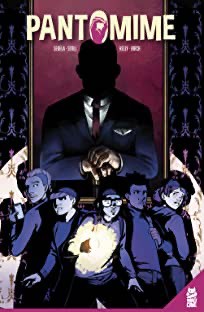 Five deaf students attempting to help a friend stay with them rob a kingpin. This deed puts in motion a chain of events that lead to more robberies, violence and an ultimate decision.

I want to start by saying that the art makes this story. The team of artist David Stoll, colorist Dearbhla Kelly and letterer Justin Birch, with the help of diversity reader Jamie Vlander Clute, makes a brilliant decision after another. The drawings of the characters hands with the motion lines showing movement along with the speech bubbles coming off of the character’s hands really makes the characters’ use of sign language believable and real. Every detail in the character designs really help the reader distinguish between the characters with the absence of nuances of people’s speech.

Story wise, the telling in fantastic. From the opening two pages, which are a flash forward to later in, the story is completely silent. The first words we read is from Haley in her confession, that later we discover is a written confession to the police. The last panel of the silent opening to the first panel with text mirror each other. The parallelisms run through the volume, as the first panel shows an older Haley which is juxtaposed with the younger Haley we will get to know and grow with as she becomes her older self.

The characters’ deafness is not the only forms of diversity in this book, as we sure see different ethnicities and one of the main characters, Kes, uses they/them pronouns. There is no major mention that this character in non binary and I find just the use of the pronouns to be very appropriate. We meet these characters when they are very young, just starting out in school and we watch them grow and change to the college students they will become. The story is told through the eyes of Haley as a college student, and we discover as her confession to the police that the whole story is her looking back at the decisions and actions that led to this point in their lives.

With that, there is a moral to this story. The characters do look at their actions as fun but I do believe that it is the fact that they are just working together and growing closer to each other, they start to refer to each other as family. There are consequences to their actions and the danger is palpable to the reader. We quickly start liking these characters and we do root for them.  When they are in danger, the feelings of fear we feel while reading is real.

The sadness I do feel is for Max.  I believe he truly saw himself as Haley’s protector, he is Haley’s blood brother in this story.  What may start out as genuine care becomes jealousy as Haley grows closer to Kes. Haley even says that she starts to love Kes while she starts to hate Max. I think Max gets in over his head and as a result he alienates the one person he cares the most about and that actually breaks my heart.

This story does not have monsters or powers but it has real danger and real heart. I felt and identified with these characters deeply. I even think my blood pressure increased during their final jobs.

Pantomime, We May Be Deaf Kids, We Are Not Helpless