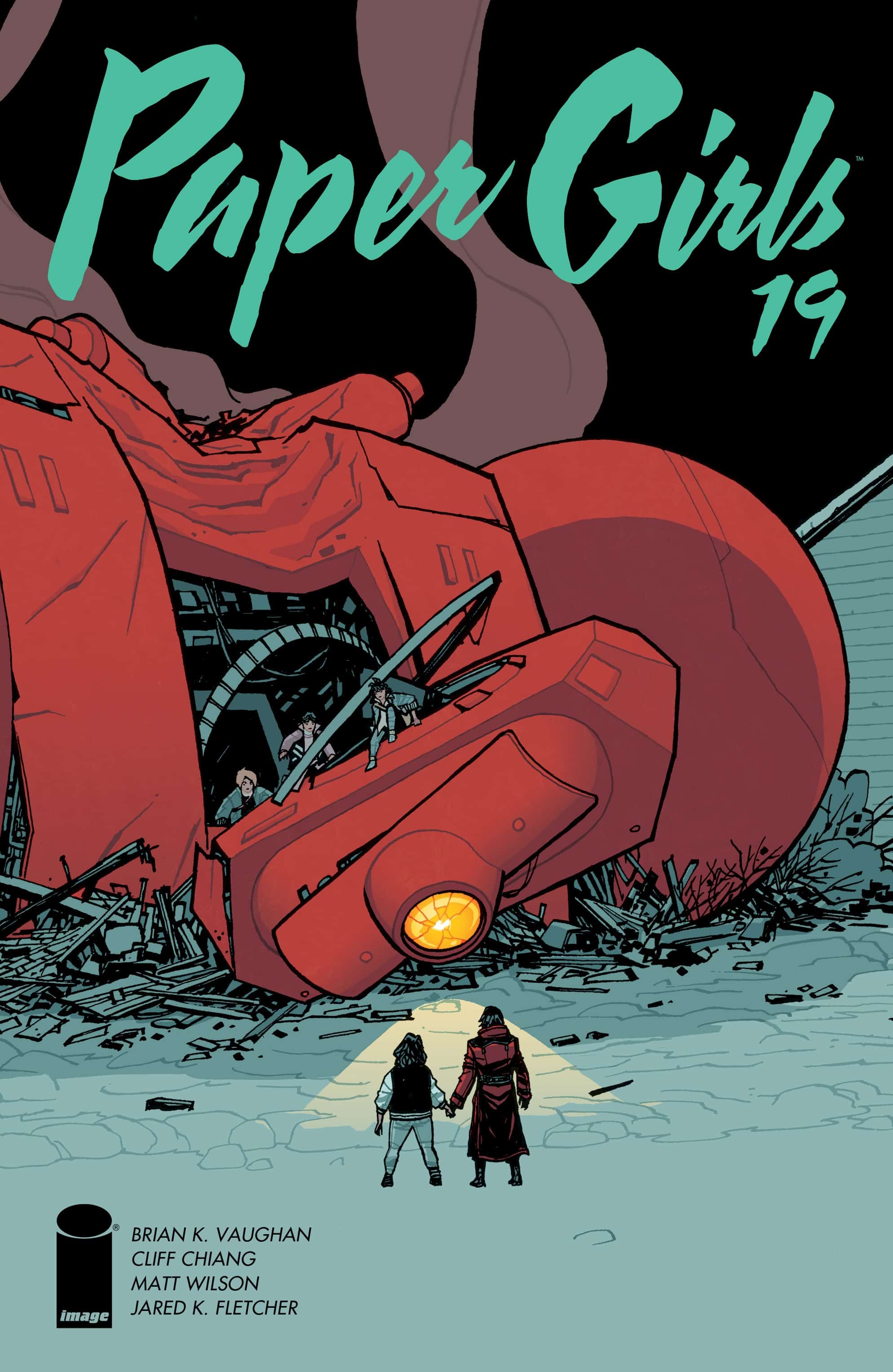 Now in the year 2000, our Paper Girls find themselves battling robots from the future that only one of them can see, inner conflict, and a potentially murderous cartoonist. Time travel, am I right?


What You Need to Know:
Currently, in the year 2000, things are getting pretty weird for the girls. After dealing with a cartoonist who leaves coded messages in her drawings and seems to know a lot about our time traveling heroes, they are reunited and meet Tiffany’s future husband, Chris. Meanwhile, a war between gigantic robots that only Tiffany can seem to see is raging outside, and they all hide in the basement just as one of them comes crashing down on the house. 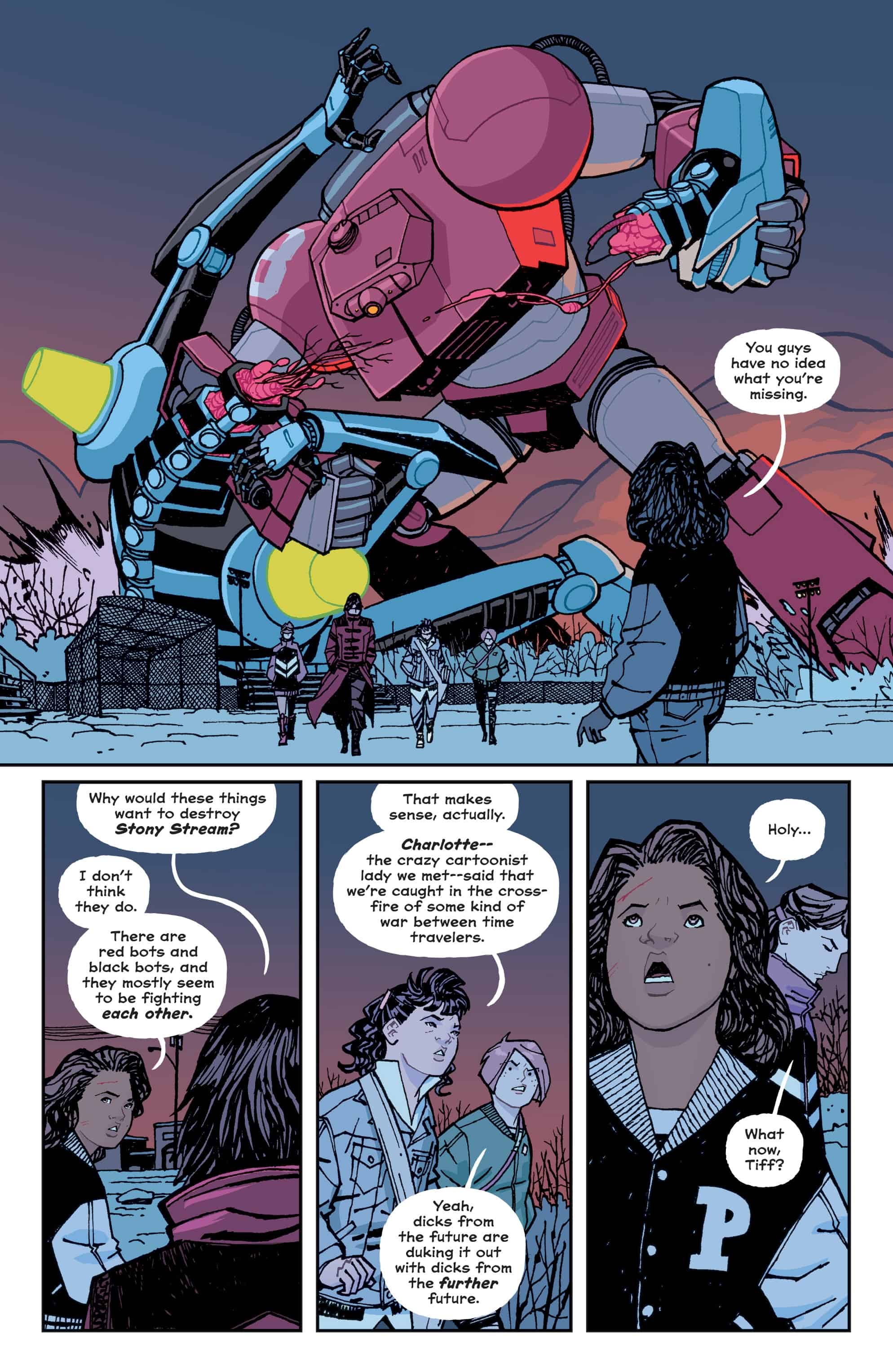 What You’ll Find Out:
Safe in the basement, we find the gang thoroughly freaked out. Chris, Tiffany’s future husband, from the future, decides he wants to go out and find current era Tiffany who is out in the middle of this. After some light arguing among themselves, they decide to go look for her. We cut to an older and very goth Tiffany at a convenience store, in the middle of a beer run. They’re closed, and a panicked employee inside tries to warn her off, but they are interrupted by the time-traveling hunters that have been chasing 80’s era, Tiffany. They inspect her for a minute but move along. Presumably, they’re looking for her time displaced younger version. They report back to their leader, Grandfather, who is in the wreckage of the robot the girls used to get to escape from the future they were in previously. Holding the dead body of the Prioress, who was chasing them previously, Grandfather gives the order to have our time traveling heroes killed. While this is happening, Y2K era Tiffany is reunited with her husband Chris, and also meets the 80’s era version of herself. After about of existential confusion, they decide to seek shelter at the local Catholic church. Though they make it to the church, their respite is cut short by more of the future soldiers. There is a scuffle, and in the fight, they vaporize Chris. Suddenly, all three of the soldiers are shot by a familiar face, the Cartoonist from earlier. She stands over them menacingly. 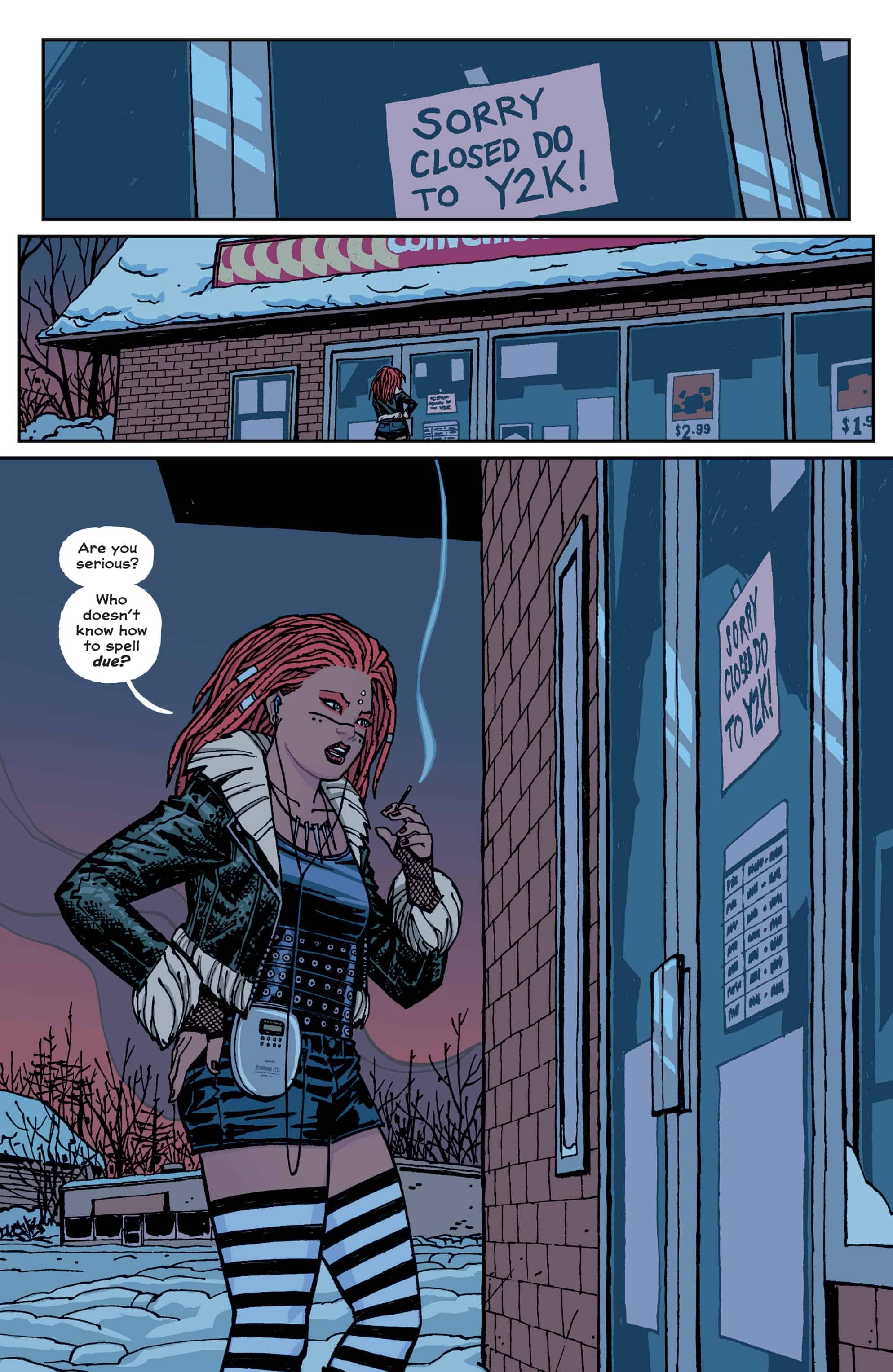 What Just Happened?
I will preface this by saying this series is pretty impenetrable if you haven’t read the previous issues. I definitely recommend reading the issues before. It’s certainly worth it. That being said, I think these issues can be hard to follow sometimes just due to the nature of the story. There’s a lot of mystery and time travel and overlapping stories, and I sometimes find myself lost reading month to month. It may work better read in TPB’s or reading several issues at once.
That being said, I dearly love this title. Brian K. Vaughn is one of my favorite writers, and I applaud him for telling a compelling and rich story. The characters are all interesting and well written, and I find myself wanting to know more about all of them at the end of every issue. Its very cool to see older versions of the characters and see how they changed, especially confronted with their younger selves. Tiffany meeting the older Cyber-Goth version of herself is definitely a highlight.
The art in this issue is, as always, fantastic. I love Cliff Chiang’s art, and it’s firing on all cylinders as always. The real unsung hero on this issue though is the colorist, Jared K. Fletcher. The muted colors on the characters in contrast with the very bright colors of the robots and soldiers from the future really make them pop. The muted colors of the main characters add a real emotional weight to them. 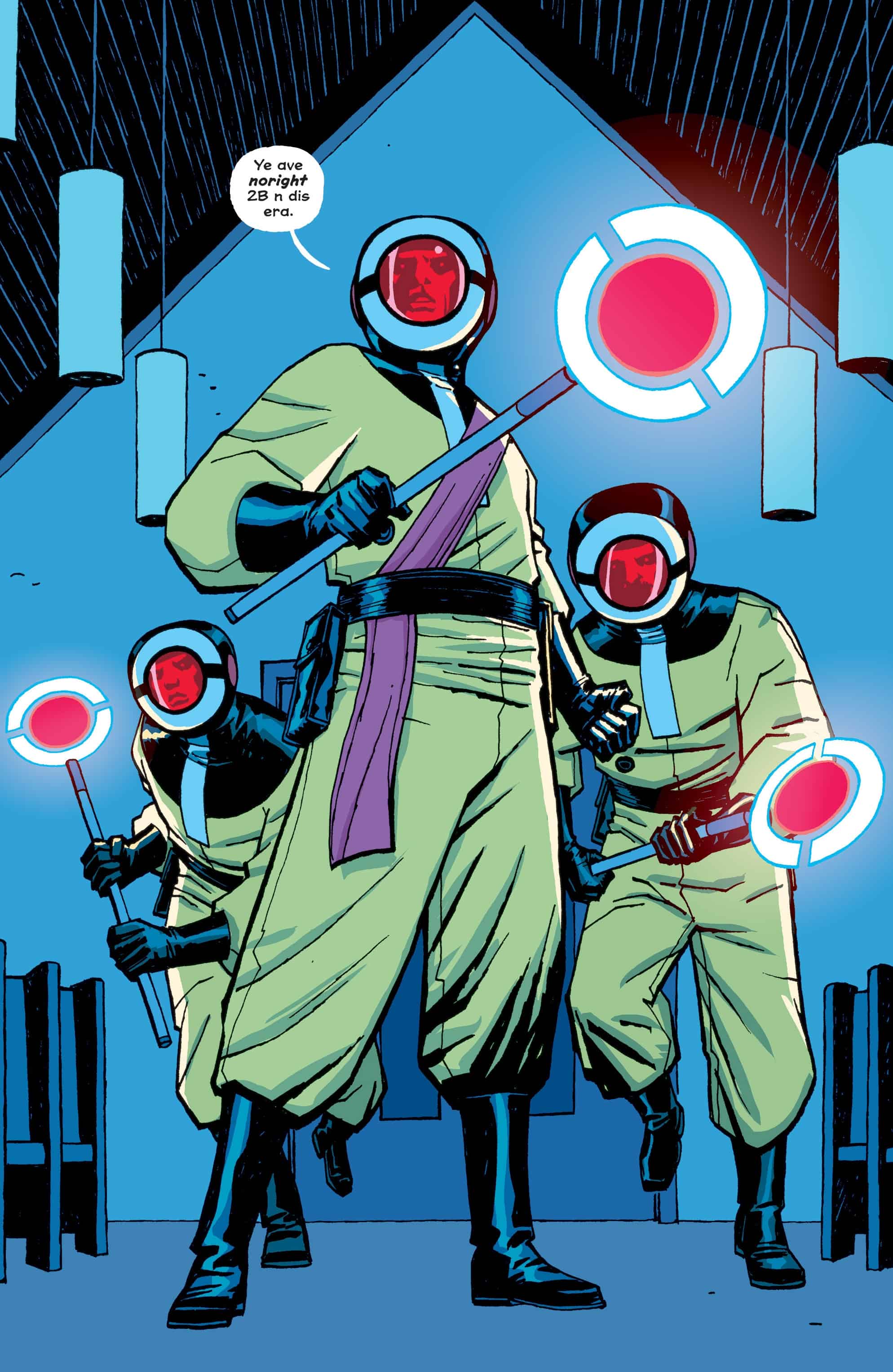 Final Thoughts: Brian K. Vaughn weaves a rich and rewarding tapestry of time travel with characters you will absolutely love. Throw in the amazing art by Cliff Chiang, and you’ve got a real winner of a book. Paper Girls delivers, time after time.