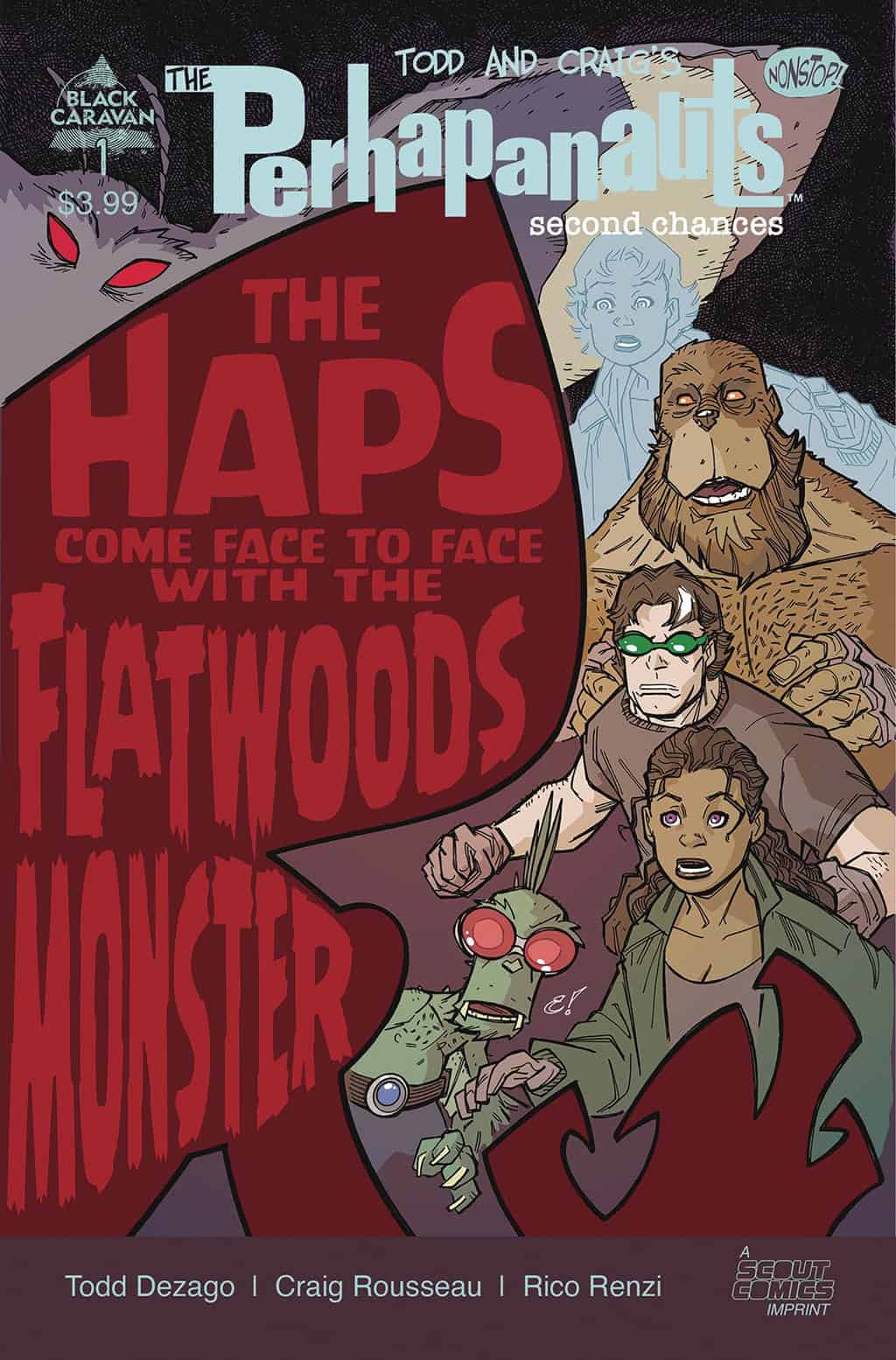 The Perhapanauts are a team of urban legends, bigfoot, chupacabra, and a mothman, who work for a secret organization called BEDLAM (Bureau of Extra-Dimensional Liabilities and Management).  Joining the urban legends are a teleapath-telekinetic, a dimensional traveler, and a ghost.  Together we call them the Blue Team or 'Haps'.  Before this issue, the team has been on several adventures but are still learning to work together.

In The Perhapanauts: Second Chances #1, we are treated to three stories about our favorite BEDLAM agents.  In the first story, the team travels through time to investigate a UFO sighting.  Despite being told not to, our heroes can’t resist tampering with time.  In the second story, ‘Seven Months Earlier’, we see Arisa and Molly on a mission. Arisa is one of BEDLAM’s best agents, and we get to see just how powerful and courageous she is.  In ‘Fiepick’ we are treated to some fun with just the boys, Big, MG and Choopie.

MG, our resident enigma, is searching for something extraterrestrial.  He takes a special interest in our 1952 UFO.  He has been distracted by UFO technology before.  We don’t learn the answer this issue, but we’re building up to the big reveal about MG’s origins.

Time is our primary theme this issue. Is time a linear event or can you change the past without destroying the future.  Some of the best stories on Star Trek and Doctor Who have dealt with changing the past and dealing with the ramifications in the future. After the events in this issue, our Bedlam agents on the Blue Team are setting themselves up for serious time stream adjustment.

One of the primary strengths of the Perhapanauts is the cast.  If you were sitting around a table in the dark playing Go-Fish, you’d know if Choopie was telling you to ‘go fish’ or if it was Big. Every character is well defined.  Their personal philosophies and opinions comes through perfectly in the story’s dialogue.

There are many comics and novels that use the ‘case files’ approach to story telling. It works for Perhapanauts. Long epic or two-page story, everything can be told non-linear because it’s just another story from the agents’ case files.

Despite all three stories being drawn by Rousseau, we get a different style with each one. Perhapanauts has a toon-style. Rousseau’s art is a little Mike Mignola and a little Humberto Ramos.  It works really well for a comic about monsters with a strong comedic element.  The only character-design that doesn’t work for me is Karl the Mothman.  Too often, Karl looks like a blob with antlers.

In this issue, we have the entire team:

You’ll immediately be immersed in a fully realized world when you read The Perhapanauts: Second Changes #1.  Todd and Craig have built a complete world using concepts we’ve seen before (UFOs, Bigfoot, Greek myths) in a unique and fun way.  BEDLAM, the organization that our heroes work for, is your standard monster hunting operation, but it gives a framework that connects any story told about the The Perhapanauts or ‘Haps’.

If you are a fan of any of these series, check out Perhapanauts.

Perhapanauts will fit right into your collection with a mixture of sci-fi, urban legends, fun and adventure.

History of the Perhapanauts

Perhapanauts has been around for a very long time (2006).  The series has floated between publishers, but I think it’s found a good home at Scout Comics’  Black Caravan imprint.  It’s a great time to get involved with the comic as Scout has given new life to the property with the rebranded releases of their previous adventures.

Did you get hooked on The Perhapanauts: Second Chances #1?  I did. I started digging for more and found that the best place to look is perhapanauts.com.  The creators are doing some really fun things with this launch of Perhapanauts like a fan club where your membership entitles you to being illustrated as a member of Bedlam.

I liked it so much, I immediately bought The Perhapanauts: First Blood direct from Scout Comics and the BEDLAM Cryptid Field Guide from the perhapanauts.com website shop.  The characters have a strong family vibe.  The adventures bring in just the right amount of 1950s UFO goodness. I'm looking forward to more.