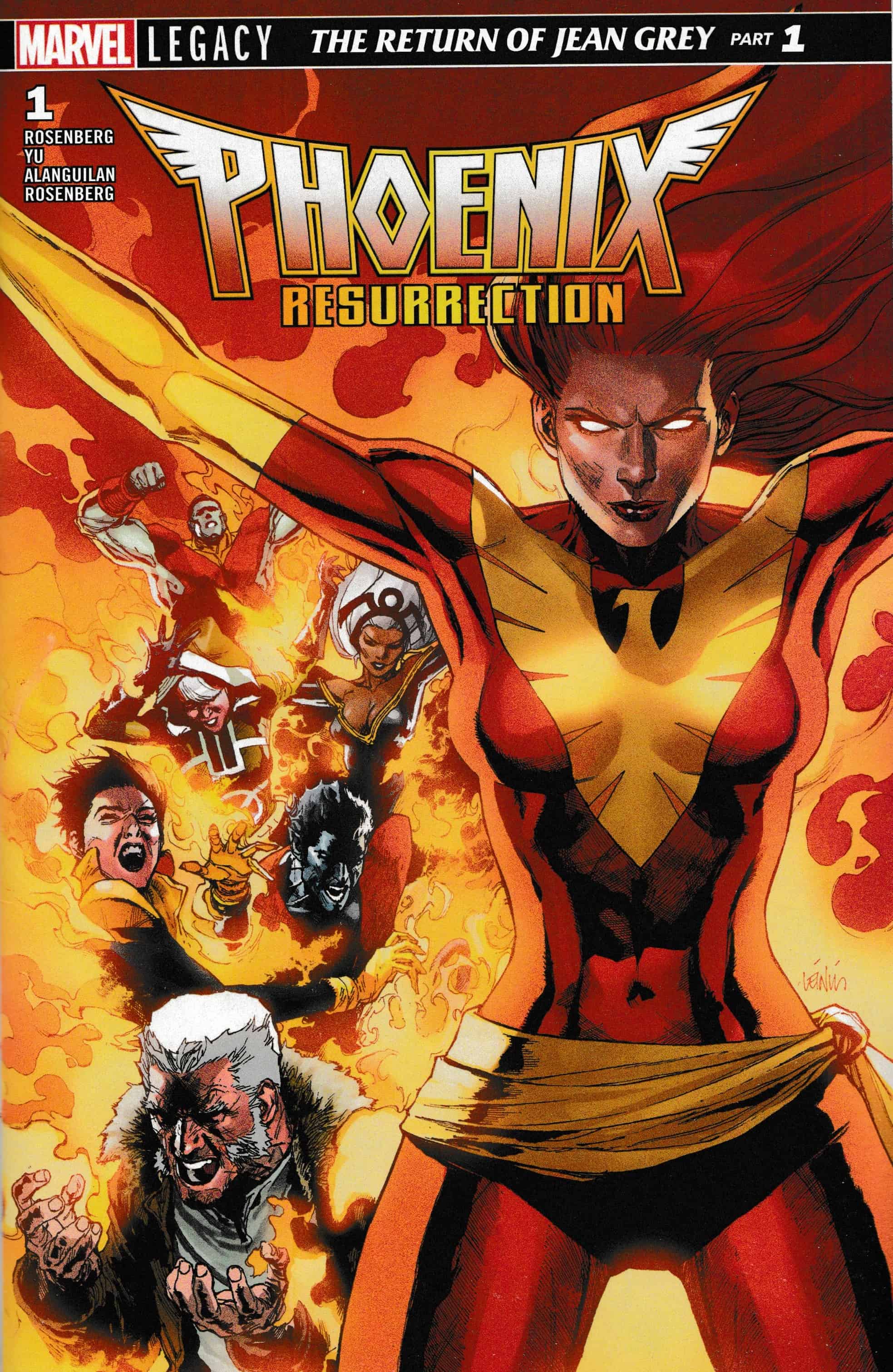 Jean has been gone for over a decade.  She’s coming back and the Phoenix is responsible.  Find out how it all starts!  The X-Men barely survived her death, but her resurrection may be even worse!

When Jean was a child, her telepathy manifested when, during a game of frisbee, her best friend, Annie, ran out into the road and was struck by a car.  As Jean cradled her friend in her arms, she heard her friend’s dying thoughts.  Flash forward several years and Jean has merged with the Phoenix, just in time to be killed by Xorn who was really Magneto who was really…hell, I don’t think we really know the answer to that.  She’s been dead ever since then (except for a brief return in which she entered the White Hot Room)….so she’s been completely gone for 12 years.

In a small community in New York, a couple kids are riding their bikes when they come across a girl in the middle of the road, blood everywhere, but she doesn’t seem to be actually hurt…just unconscious.  When the kids stop to help, the unconscious girl sits up and opens her eyes, but they are filled with darkness.  She speaks some weird language and then another girl, a redhead, shows up, asking if they want to play frisbee.  The first girl has now vanished and the redhead holds a dead pigeon in her hands.  She tosses it into the air and it flies and then flies into the sky herself as the two other kids run. 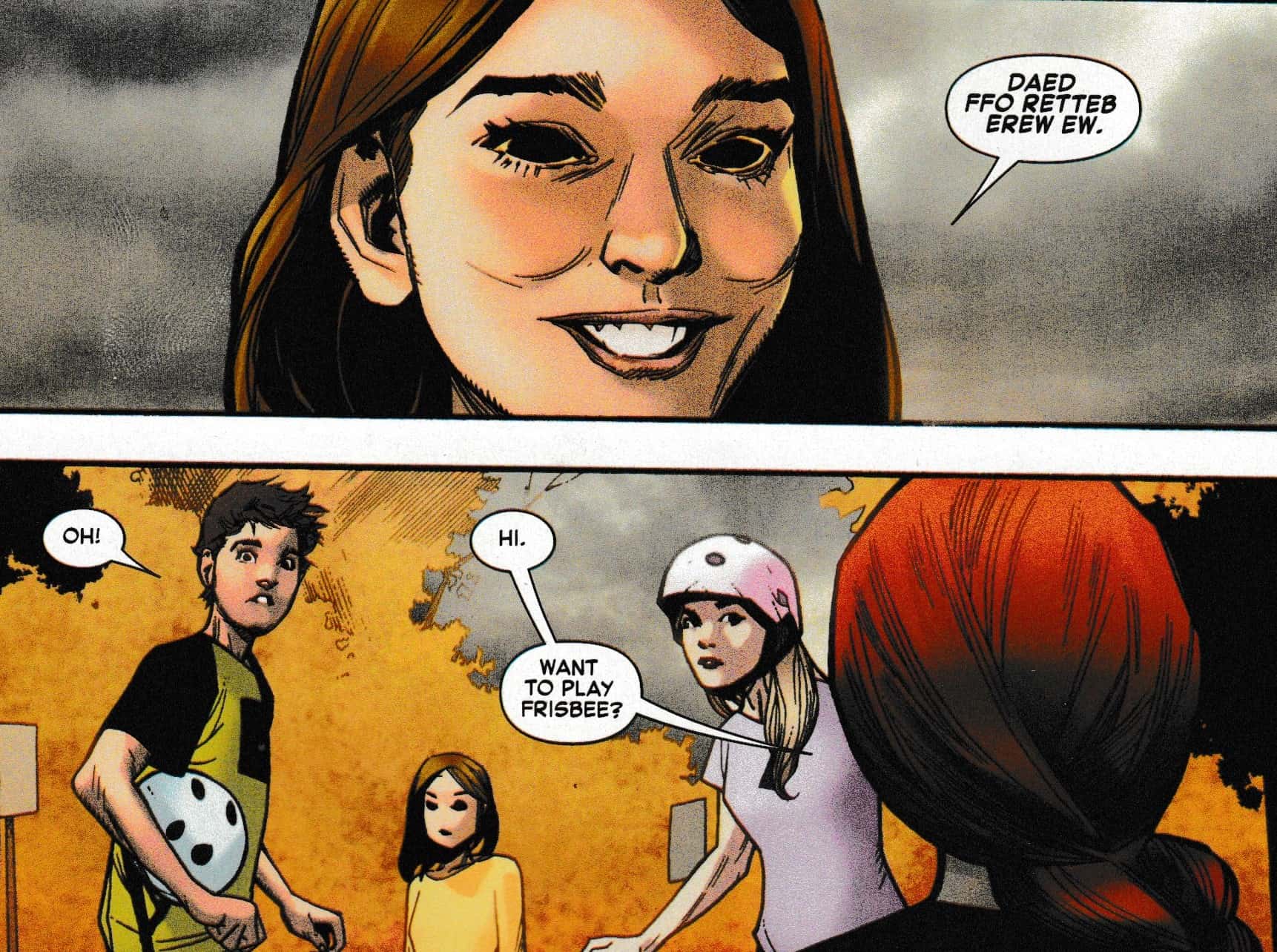 A couple hours later, Kitty’s X-Men team shows up to assist the local sheriff with his investigation since it’s clearly a mutant problem.  Rachel immediately senses something but she’s not sure what.  Whatever it is, though, gives her a nosebleed.  The sheriff leads the X-Men to the kids who are floating.  Not high in the sky…but floating just a little bit above the ground.  Blood everywhere, but no injury can be found on their bodies.  And dead birds are everywhere.

Back at the mansion, Kitty gives a briefing to virtually every single X-Men in the books today.  Strong Guy is even there.  Beast explains how Cerebro alerted them to a new reading, one they’d never detected before.  The kids at the center of it weren’t even X-gene positive.  But whatever it was, put Rachel into the infirmary.  But as it turns out, the same energy that was detected at this site was detected in three other locations throughout the world.  So Kitty puts together three teams to check them out at the former Hellfire Club, Mont Saint Francis, and the North Pole.

At the Hellfire Club, Kitty’s X-Men Gold team (along with Magik and Jubilee), checks out some weirdness and run into Hellfire Club mercenaries who aren’t human.  At Mont Saint Claire, the X-Men Blue team along with Rogue immediately run into Seamus (he’s an ugly Acolyte who pops up now and then).  And on the North Pole, the Weapon X team runs into…Young Man Logan?  But then, all of the problems at each site seem to vanish and a bright light can be seen in the sky by all three teams. 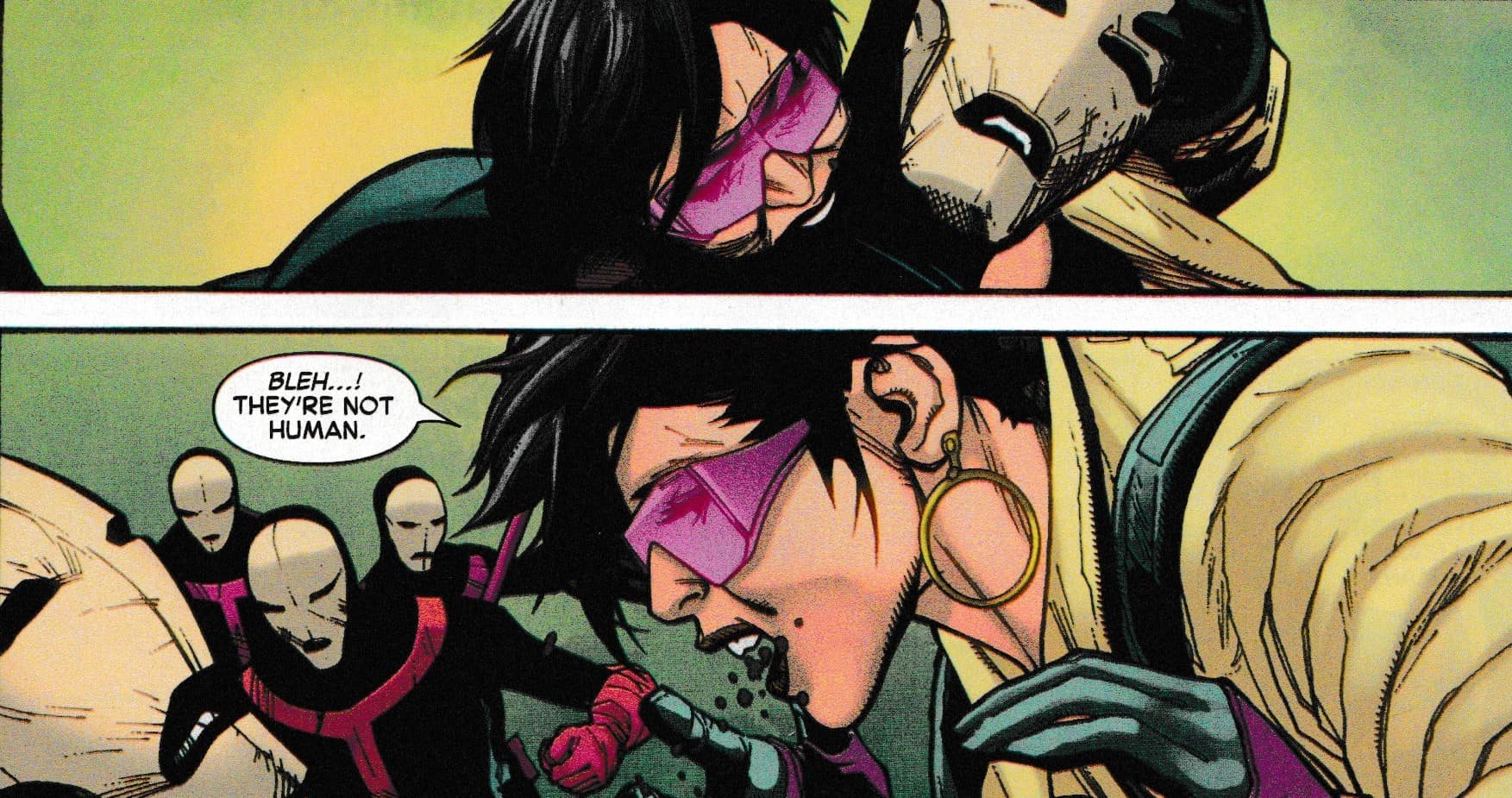 Somewhere else, just outside of a diner, a waitress sees a bright bird shape in the sky.  She’s joined by another waitress…a redhead…with a nametag of Jean.  When the light disappears, the two waitresses go back into the restaurant.  There’s a couple of customers, both of whom Jean seems to know as regulars:  Annie and Mr. Cassidy.  Jean then heads home after work (passing by a church with the quote from Revelation about the final Horseman).  She starts talking to her parents when the doorbell rings (and I don’t think it’s fair to spoil who’s standing there). 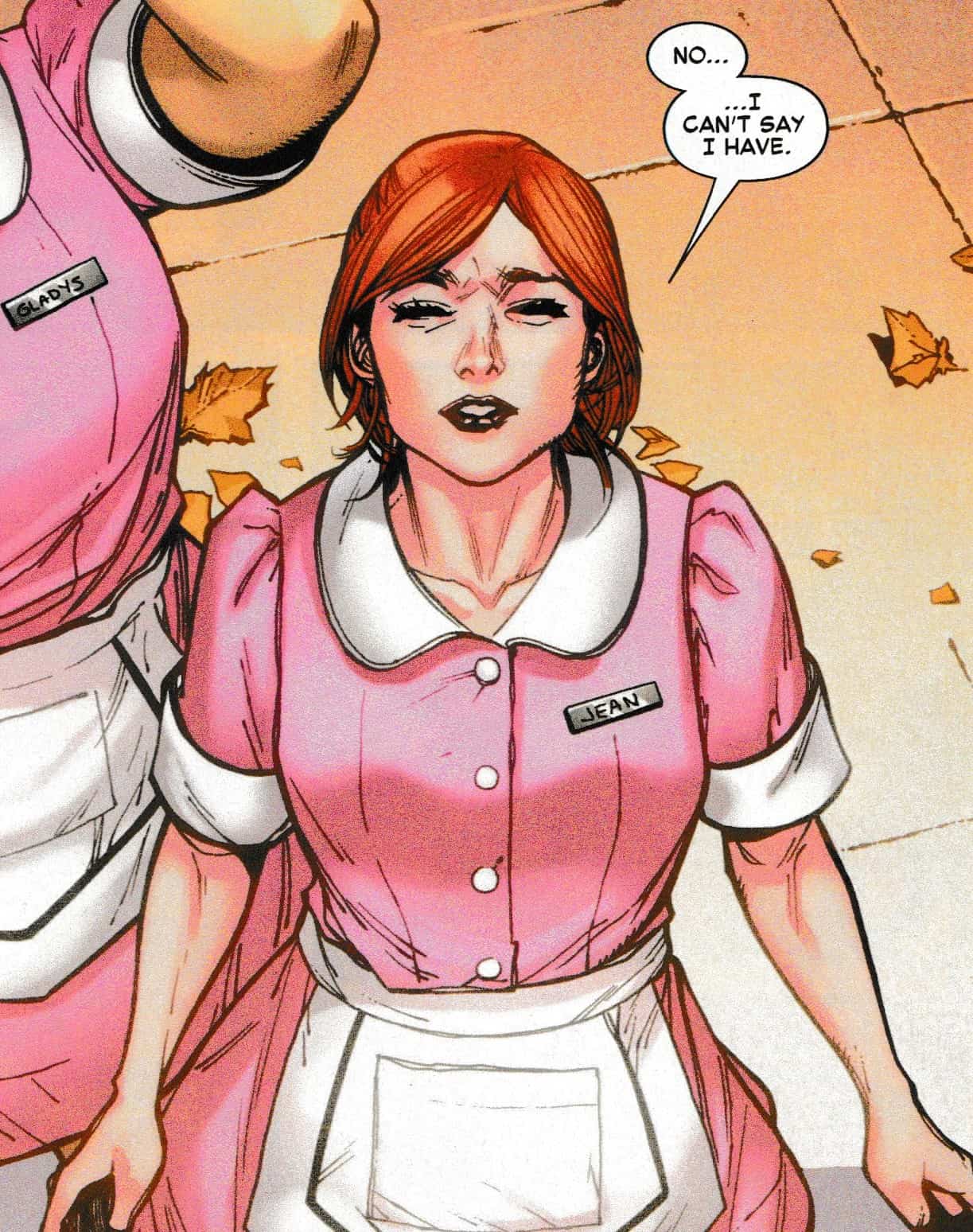 When I first heard about this book coming out, my first thought was “it’s about time”.  Jean had been gone longer than any other of her “deaths”.  And I missed her.  I know not everybody is a Jean fan…but dammit, I was.  I’m not one of those rabid Phoenix fans, but I liked Jean.  I thought she was strongest without the Phoenix.

Which led me to my second thought:  “I really hope they handle this well”.  See, I know that a Jean resurrection is going to involve the Phoenix, but such an epic story would have the potential to fall to pieces so easily.  Especially because I’d never heard of the writer before.  When I looked him up, all I could see was that he wrote Secret Warriors….  Seriously?  We’re expected to have a relatively unknown writer handle one of the biggest resurrections in comics’ history?

Now, I know this is the first issue and all…and it still could go to hell.  But if I’m going to base my reaction just on this book?

Matthew Rosenberg was the right guy for the job.

I mean, sure, very little happens in this book.  But it’s the first of a miniseries.  Give it time.  It does a fantastic job of setting things up and tells an amazingly complex story.  The pacing is beautiful (props to both Rosenberg and Yu).  So much so, that I can almost hear the music playing when the title page is given to us right after we see the floating kids.  You just get to immerse into the pages that it feels like an amazing TV show.

And of course, we’re left confused, but honestly…if you know anything about Jean and the Phoenix, that is where we absolutely should be.  We should be confused.  Answers will be forthcoming…and maybe they will disappoint, and maybe they will be enjoyable…but for now, we’re teased at what is happening.

It’s not a perfect issue…but what is?  Seriously, I pretty much have to nitpick to find any real fault here.  I have a little problem with Rachel being sidelined so quickly considering that she’s been out of it for several issues now in Gold.  I’d like to see her back and considering it’s her mom returning, I really hope we see more of her next issue.  Maybe it’s just bad timing.  Kind of like Jean still being around in X-Men Blue while she’s now been “killed” in her solo mag.  Gotta assume that the team books are all happening before this.  But I’m not really going to criticize this issue for that.  That’s an editor’s problem, not the writer’s.

Still, the good far outweighs the bad.  Leinil Francis Yu was perfect for this book as his art is breathtaking.  The colors really deserve some credit here as Rachelle really gives the impression of a bird far too bright to really make out but the colors are vibrant with the pink waitress uniforms like something out of a 50’s diner. 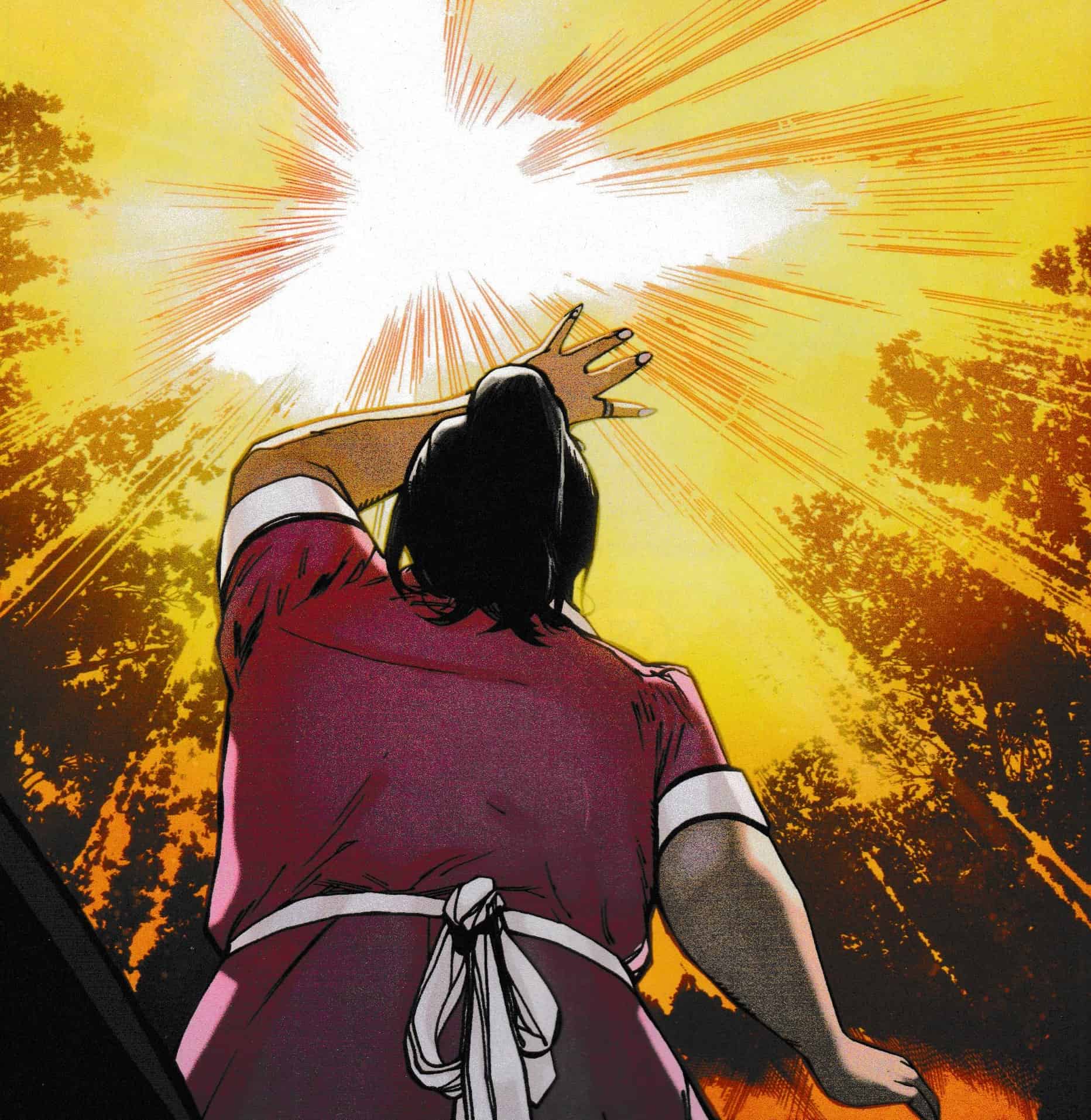 And then some of the smaller little touches that maybe weren’t necessary for storytelling but gave it so much more depth (and added that creep factor), such as young Annie talking backward and then Rachel doing the same thing…sent shivers up my spine!

And of course…at the end, we’re all left wondering…is diner Jean the real Jean?

Final Thoughts:  Rosenberg and Yu give us a near perfect start to the resurrection of one of Marvel’s most popular characters.  The art is beautiful, the story is mesmerizing, and all I can think is how glad I am I only have to wait one week for the next issue.