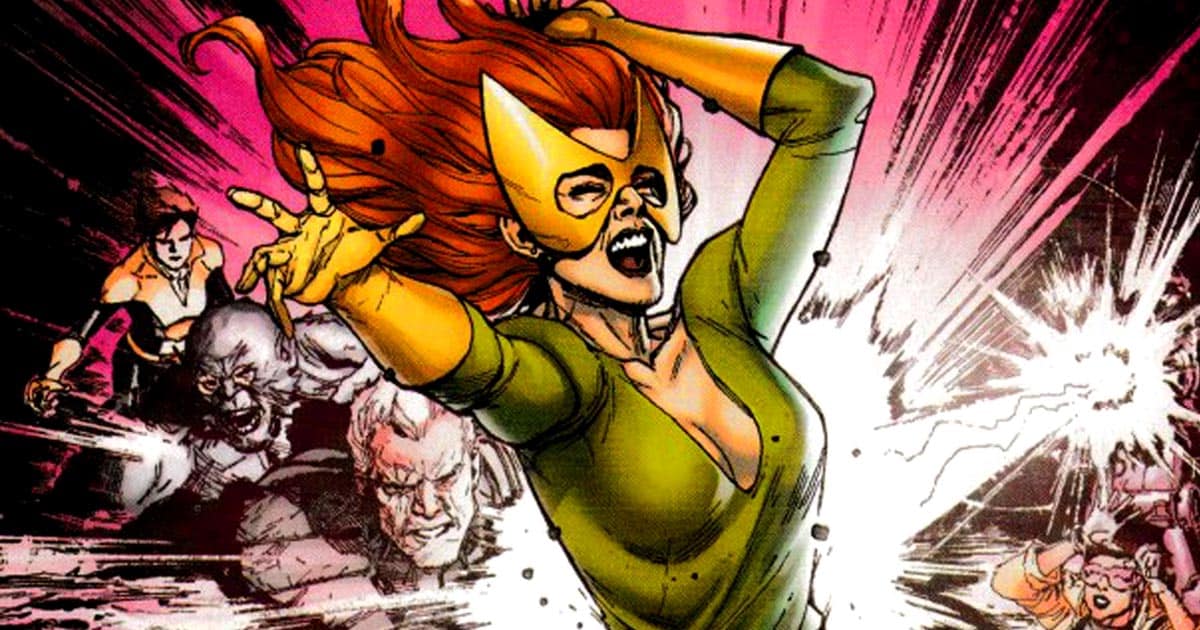 The mystery deepens as the X-Men realize they have to search for both the missing psychics and the Phoenix, dividing their forces even further.  Meanwhile, Jean lives the perfect life in the suburbs…but that’s about to change. 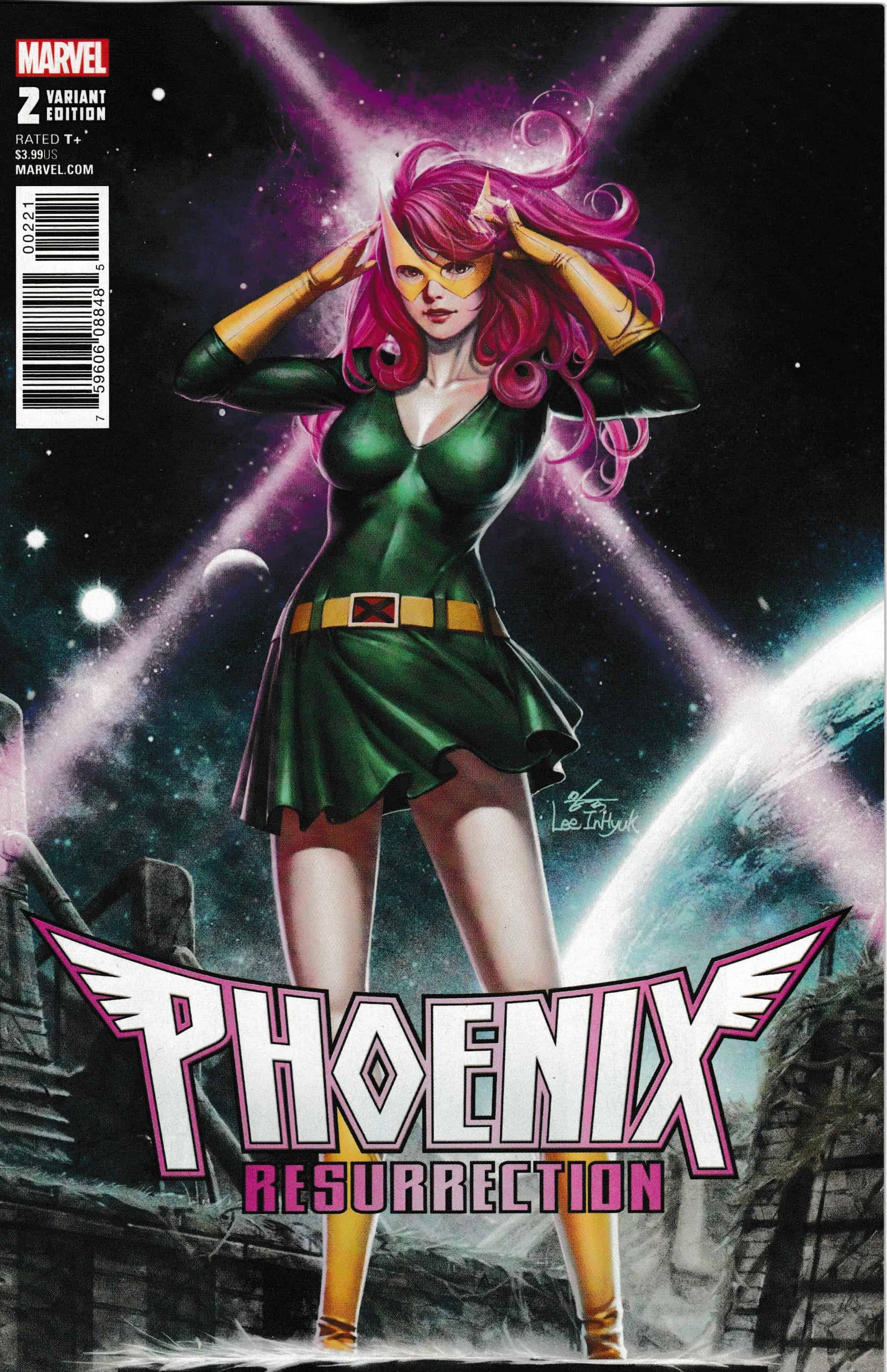 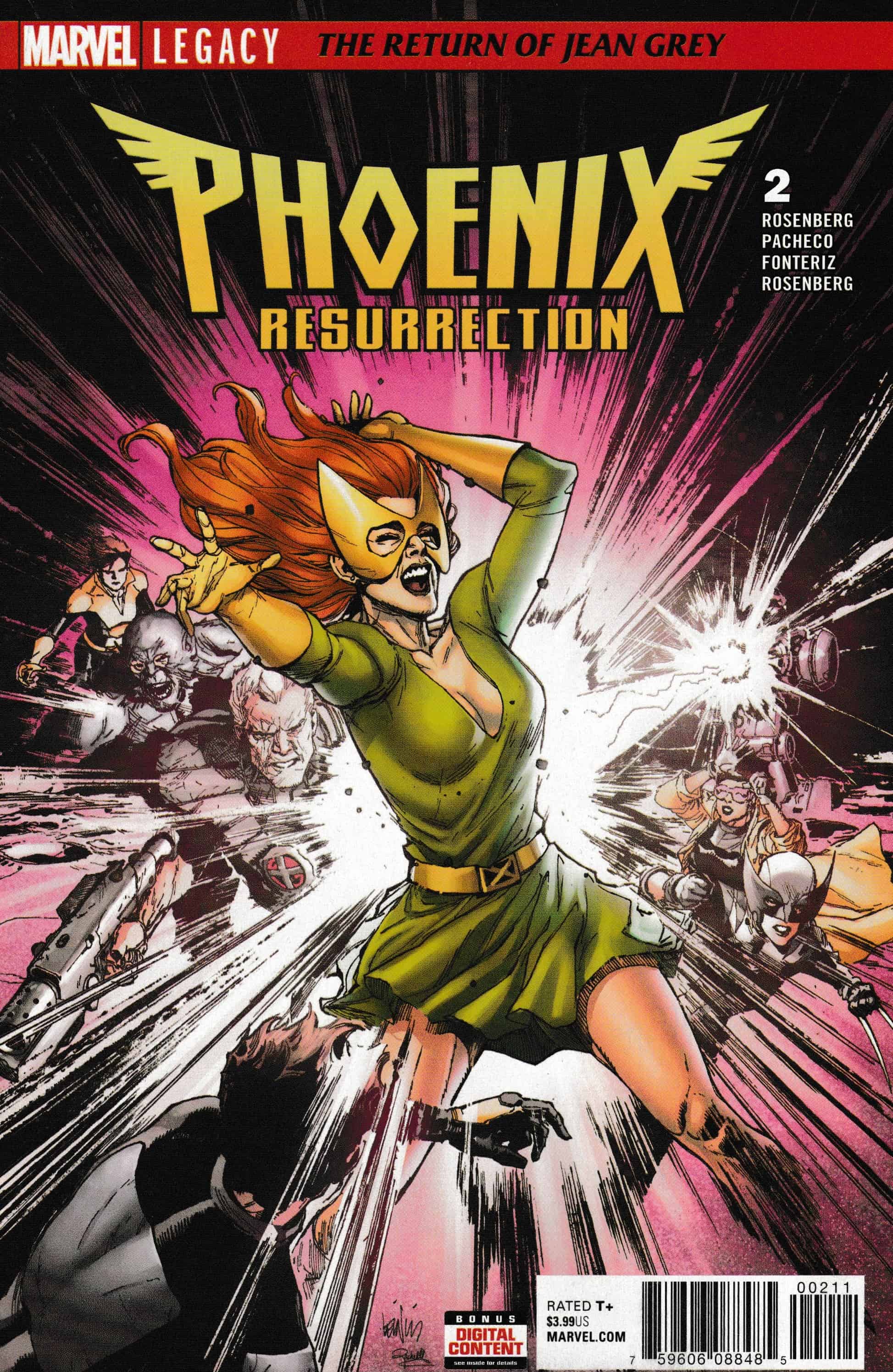 There’s so much to give away in this book, I don’t feel I can do a review without details, nor do I want to…  so…

[SPOILERS AHEAD]  You’ve been warned.

What You Need to Know:
Something odd is happening.  Two children in Jean’s hometown are left displaying signs of being mutants even though they didn’t have the x-gene.  More signatures pop up all over the globe, including France, the North Pole, and the Hellfire club.  After investigating, the X-Men are still left clueless.  In a small diner, a red-haired waitress named Jean sees a giant bird of fire in the sky but she just returned to work.  After all, her friend, Annie, was also her boss and needed her to wait tables.  After work, she’s paid a visit by one Scott Summers.  Yeah…a lot of weirdness going on.

To make matters worse, unbeknownst to most of the X-Men, the young version of Jean Grey from the past appears to be dead, killed by the Phoenix, and the rest of the psychics with her, Quentin Quire, Emma Frost and the Stepford Cuckoos, have all been incapacitated.

What You’ll Find Out:
As a crew in Earth’s orbit is checking out a satellite there is a flash of fire on the moon.  Meanwhile, Jean is having a nightmare, muttering the same words that Jean/Phoenix said in the blue area of the moon right before she died.  As she thrashes about in bed, everything in her room starts levitating.  As she stirs, everything drops, waking her up.  Later that morning, she heads off to work, saying goodbye to her neighbor, Jamie.  As she leaves we can see him behind her.  All 20 of him. 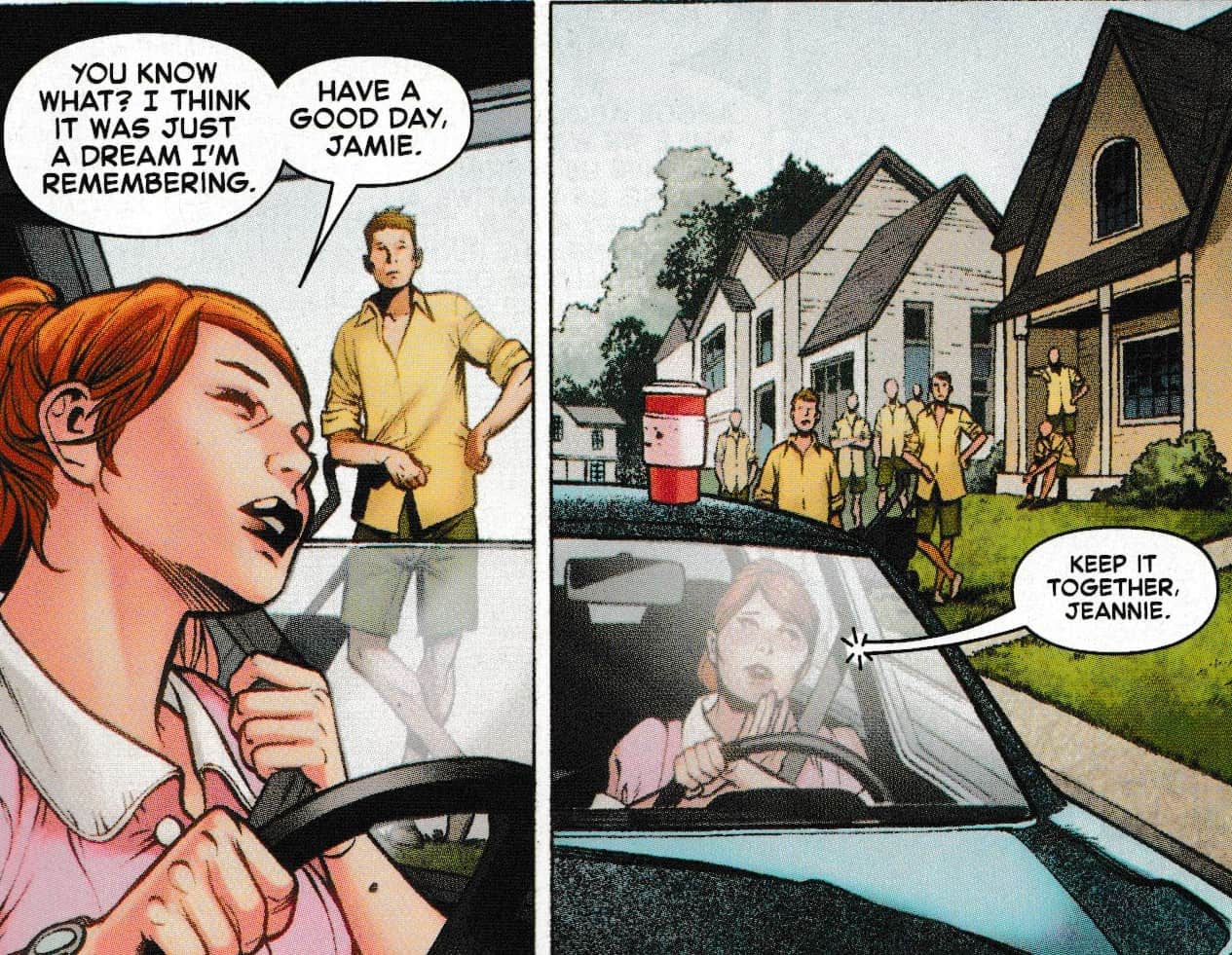 At the Xavier Institute, they are trying to figure out what is going on.  There’s especially a concern with the Phoenix being back.  But with Psylocke now injured, there’s nobody they can find who can operate Cerebro.  Except Cable is there.  And everybody always forgets that he is a telepath.

At the diner, Jean waits on a customer, a certain grey-haired man who seems to keep bending spoons.  He claims to know Jean, but she doesn’t remember him.  He used to work with her teacher.

Cable hooks up to Cerebro.  He’s not exactly the most experienced with it (since he’s always relied on his guns rather than his powers).  But he knows enough of what to do.  And as he reaches out, he senses pain at first, and then the entire Cerebro unit shorts out, rendering Cable unconscious. 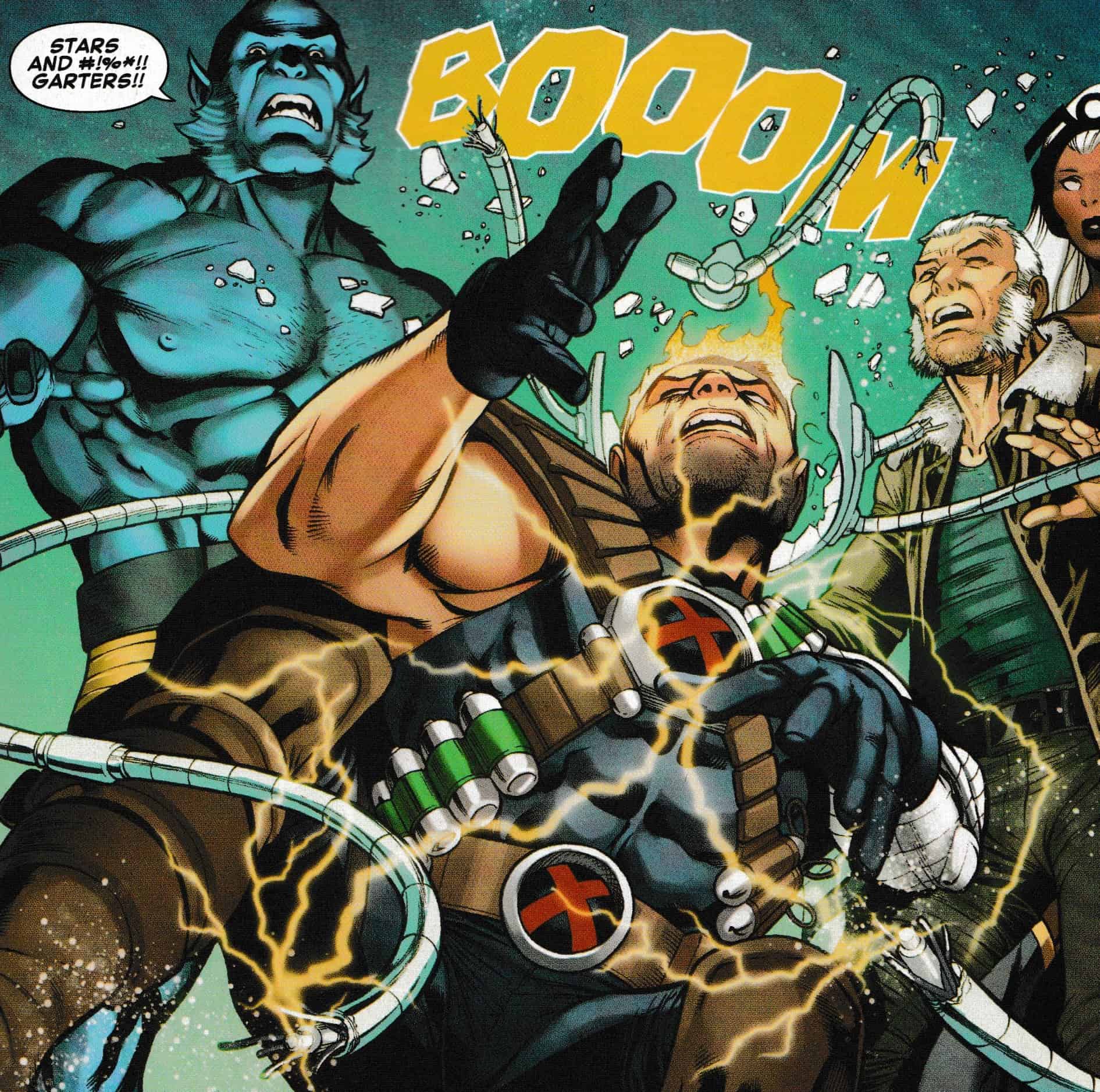 Back at the diner, Jean, suffering from a headache brings out the old man’s order…but he’s gone.

Kitty has split up the teams again, searching for both the missing telepaths as well as signs of the Phoenix.  None of the teams find anything…except one.  Iceman leads Longshot, Wolverine/X23, Chamber, Hellion (I think?), and Meltdown/Boom-Boom/Boomer (or whatever name she goes by).  They stumble across Magneto, in his classic, arch-enemy of the X-Men, Brotherhood of Evil Mutants garb.  The X-Men attack.  Chamber blows up Magneto’s arm but it easily regrows?  But then during the battle, he seems to be…ordering a cup of coffee?  Wolverine attacks and he immobilizes her until she drives her food claw into his head.  Suddenly, Magneto vanishes.

And just like that, the old man is back in the diner.  He’s bleeding from his nose, though.  Jean seems to be feeling a bit better as she fills his coffee but then as she looks outside, she sees nothing but fire and destruction…in the shape of a bird. 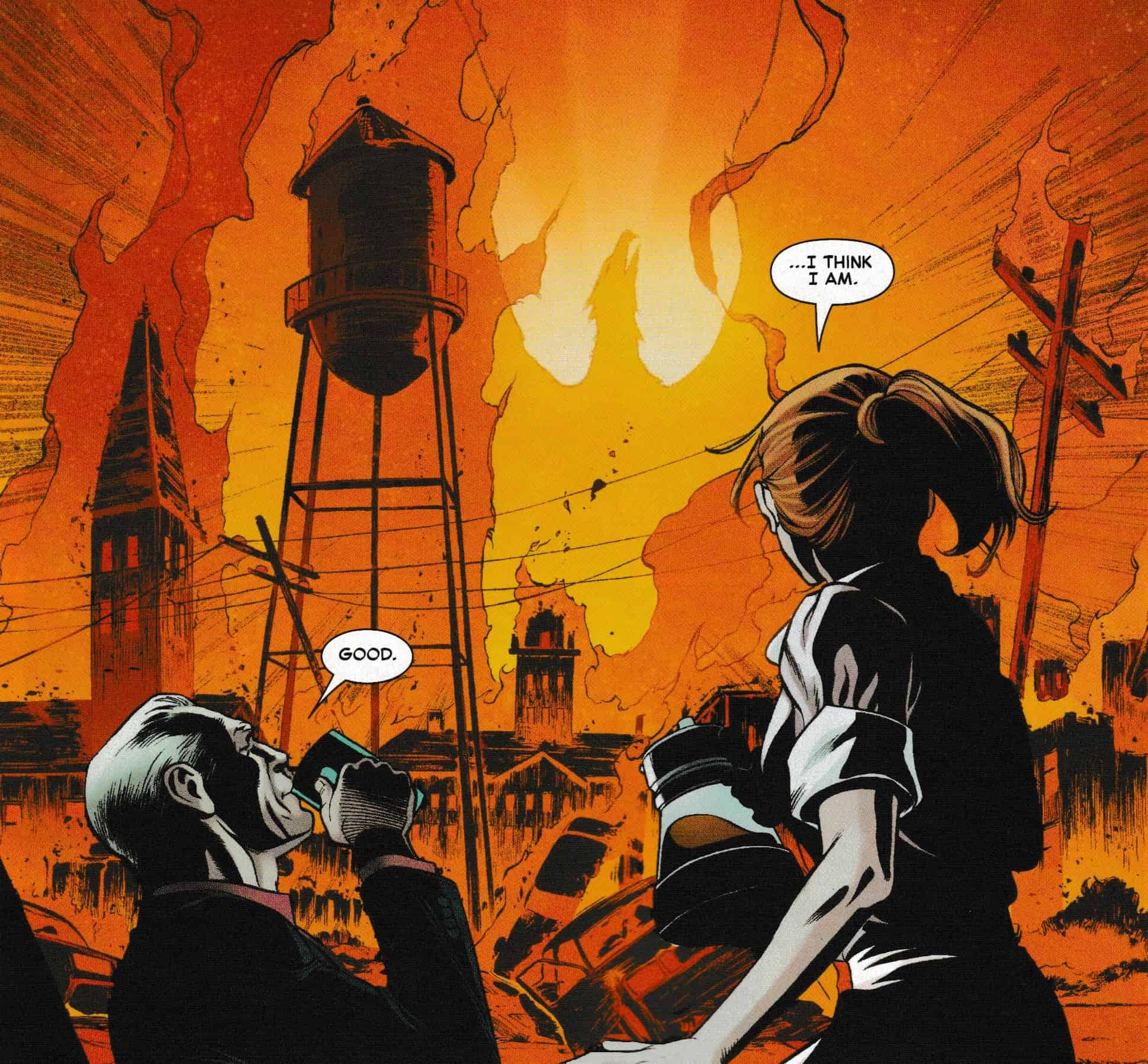 What Just Happened?
So here was the real test…  Could Rosenberg keep it going for a second issue?  Could he keep the mystery, the suspense, the enjoyment I got from the first issue?  Could he hope to match what I thought was one of the best X-Men comics in a long time?

The answer…is a resounding mostly yes!

Admittedly, part of what made the first issue so great was the mystery of it.  But too much mystery and not enough answers can frustrate a reader.  I’m more stubborn than most, but I can see that another issue of no answers is going to frustrate people.

We’re treated to more of Jean living what seems to be the simple life in this diner.  But it gets weirder.  We see Jamie everywhere in her suburban neighborhood.  We get a mention of Dr. MacTaggert.  It seems that most people in her “world” are dead (yes, I know Banshee actually returned as the Horseman Death but it’s an understandable mistake).  Except there’s Magneto.  And it’s unclear if this is the real Magneto somehow manipulating Jean (which I wouldn’t put past him) or if it’s part of this weird world that has been concocted (either by Jean, the Phoenix, or some unknown third entity).  And the creepiness ensues (although Leinil Yu’s art certainly added to the creepiness which is lacking here) as Magneto seems to order a cup of coffee in the middle of a battle.

Rosenberg offers plenty of fan service, some of which works, some doesn’t.  It’s not clear if that’s Hellion with Iceman.  He seems to have Hellion’s uniform but I thought Hellion had cybernetic hands?  So much gets changed and I know Hellion has been in other titles lately so maybe it’s not a flub.  We get a little bit of Boom-Boom (sorry for all those who prefer one of her many later names, but she will always be Boom-Boom to me).  The problem is we’re teased by giving a small taste of some of these smaller characters that we’ve long craved to be back in X-titles and then we barely get to see them do anything.  I have to keep reminding myself that this is a Phoenix/Jean book first and an X-Men ensemble book second.  Almost everybody we see in here is in there just to put things in context.  It works for me…but it won’t for everybody.

Rosenberg draws from the greatest Phoenix story of all as well.  In addition to the cover being a clear homage to her death on the moon, the opening scene to this book is a plume of fire erupting from the moon, much like it did way back in X-Men #137.  And Jean’s nightmare had her muttering the words she said right before she died in that same book. 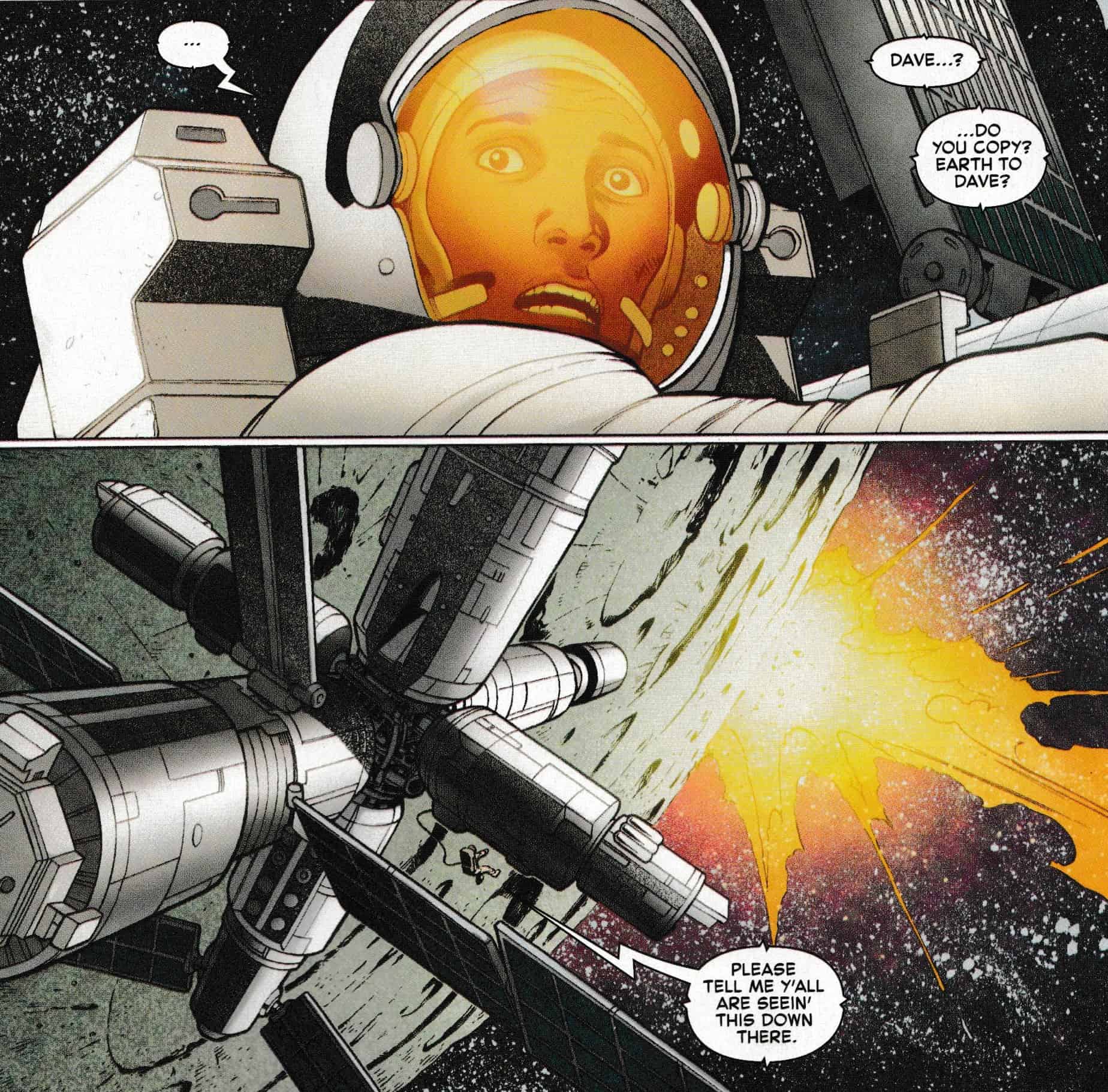 The humor is also there in this book.  Not in a Jar Jar way, but rather in a little more subtle in character sense with Iceman.  And the semi-break in the Fourth wall, while not necessarily a joke, was absolutely priceless!  I loved how Jean mentioned her first teacher being “Mr. Claremont”.

Carlos Pacheco’s pencils, while not quite as moody as Yu’s were last issue, are fantastic and fit this book so well (there’s no wonder he’s one of my favorite artists).

All in all, it’s a definite repeat home-run even if it wasn’t quite the grand slam the last issue was.

Final Thoughts:  Rosenberg does it again, deepening the mystery.  There’s some concern he can wrap it up in 3 more issues, but so far, he’s established himself as one of the better miniseries writers for the X-Men in a long time.  The second issue does what I didn’t think was possible, and provides a near perfect follow up!