We’re getting close to answers as the X-Men continue to try and track down both Phoenix and the missing psychics.  Meanwhile, Jean tries to figure out all the weirdness in her completely normal life.  And it only gets worse.  Rosenberg takes us further into one of the best X-Men stories in recent memory! 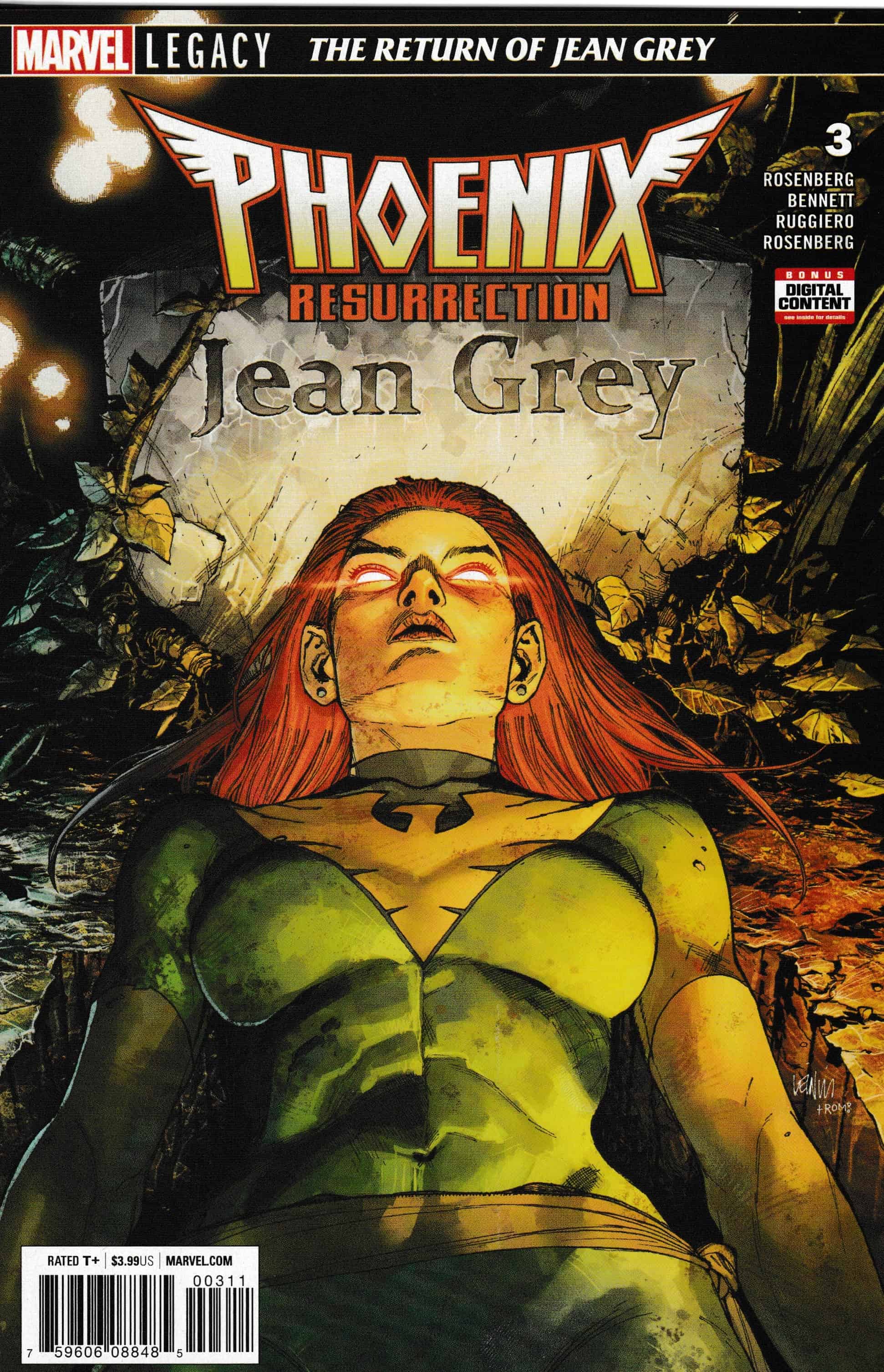 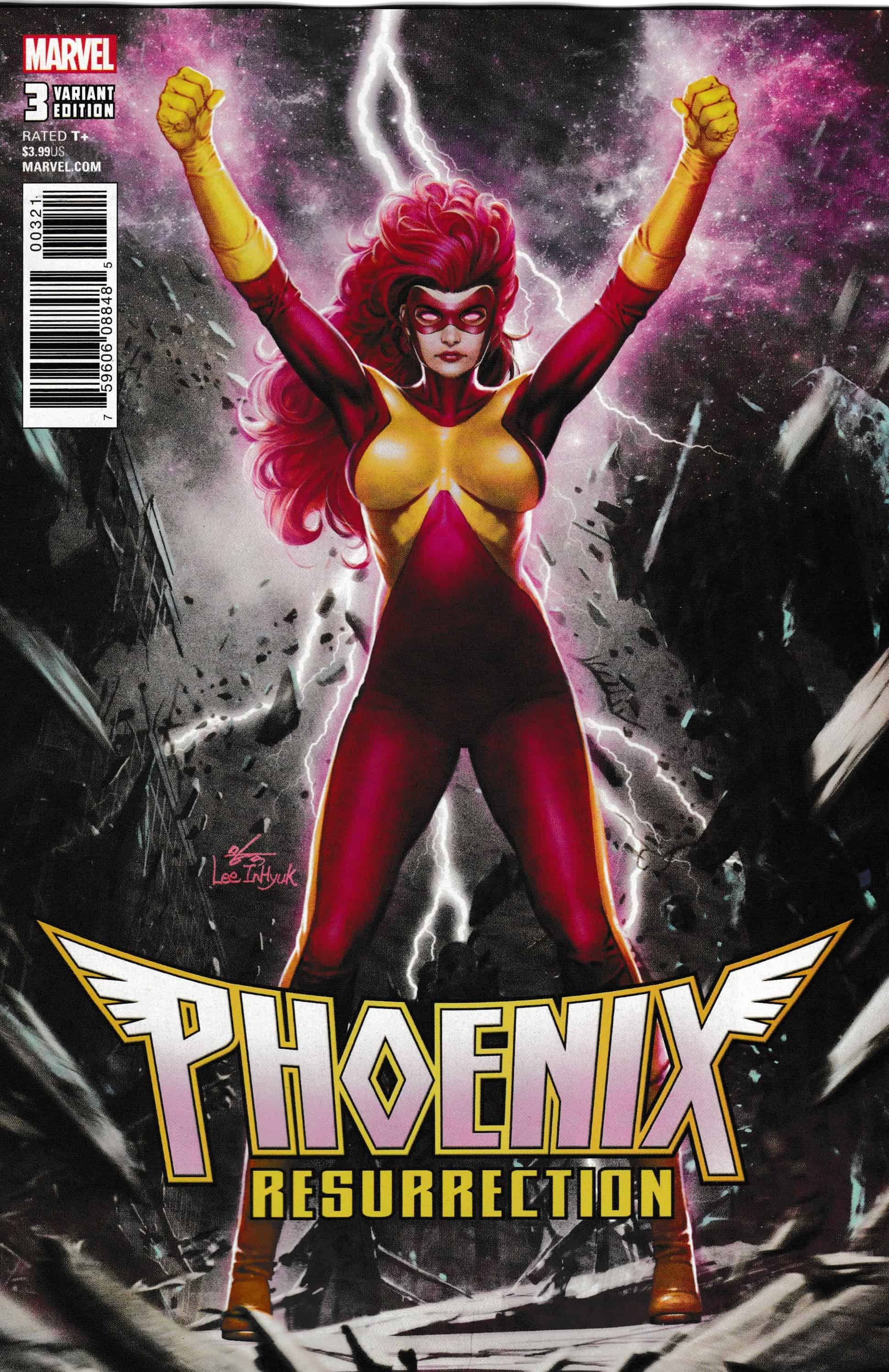 HEY…SPOILERS AHEAD (YOU’VE BEEN WARNED)

The Phoenix seems to be coming back.  Jean is alive and well but she is a waitress in a diner?  Strange things keep happening to her, though.  Things that have to do with the Phoenix, although she doesn’t realize it…because she’s just an ordinary girl, right?

The X-Men are trying to track down the oddities, but they have gotten nowhere.  All of their psychics are out of commission (some missing, some injured) and Cerebro is wrecked.

The time-displaced young Jean while talking things over with the ghost of older Jean encountered Emma Frost in an effort to find out how to avoid the Phoenix.  That did not end well.  Young Jean along with ghost old Jean (there are too many damn Jean’s), Hope Summers, Quinten Quire, and the three Stepford Cuckoos encounter the Phoenix Force and are quickly vanquished.

A familiar sight.  Jean, piloting the space shuttle back to earth.  Her TK shields are about to give way, the radiation starts to get through.  We all know this.  But something’s not quite right.  This Jean isn’t in some torn black dress meant for a night out on the town but interrupted by Sentinels.  This Jean is in a waitress uniform.  The shuttle crashes in the bay and as the water fills the cabin, Jean begins to drown.  Until she opens her eyes and realizes she’s on the floor in a grocery store, surrounded by bottles of water that spilled when she collapsed.  The bystanders (one who looks suspiciously like Gateway but isn’t named) ask that she lie still, wait for a doctor, but Jean is noticeably freaked and takes off.  Back in Jamaica Bay, there’s no sign of the shuttle crash, but a father and son are fishing.  One dead fish floats to the surface.  Then several more.  Then the waters start churning.  Something’s coming up.  A plume of fire erupts, engulfing the boat (the would-be fishermen escape into the water just in time).  Jean runs out of the store into her car.  Another bystander (this one appears to be Darwin) tries to check on her as Jean tries to start her car but the damn thing won’t turn over. 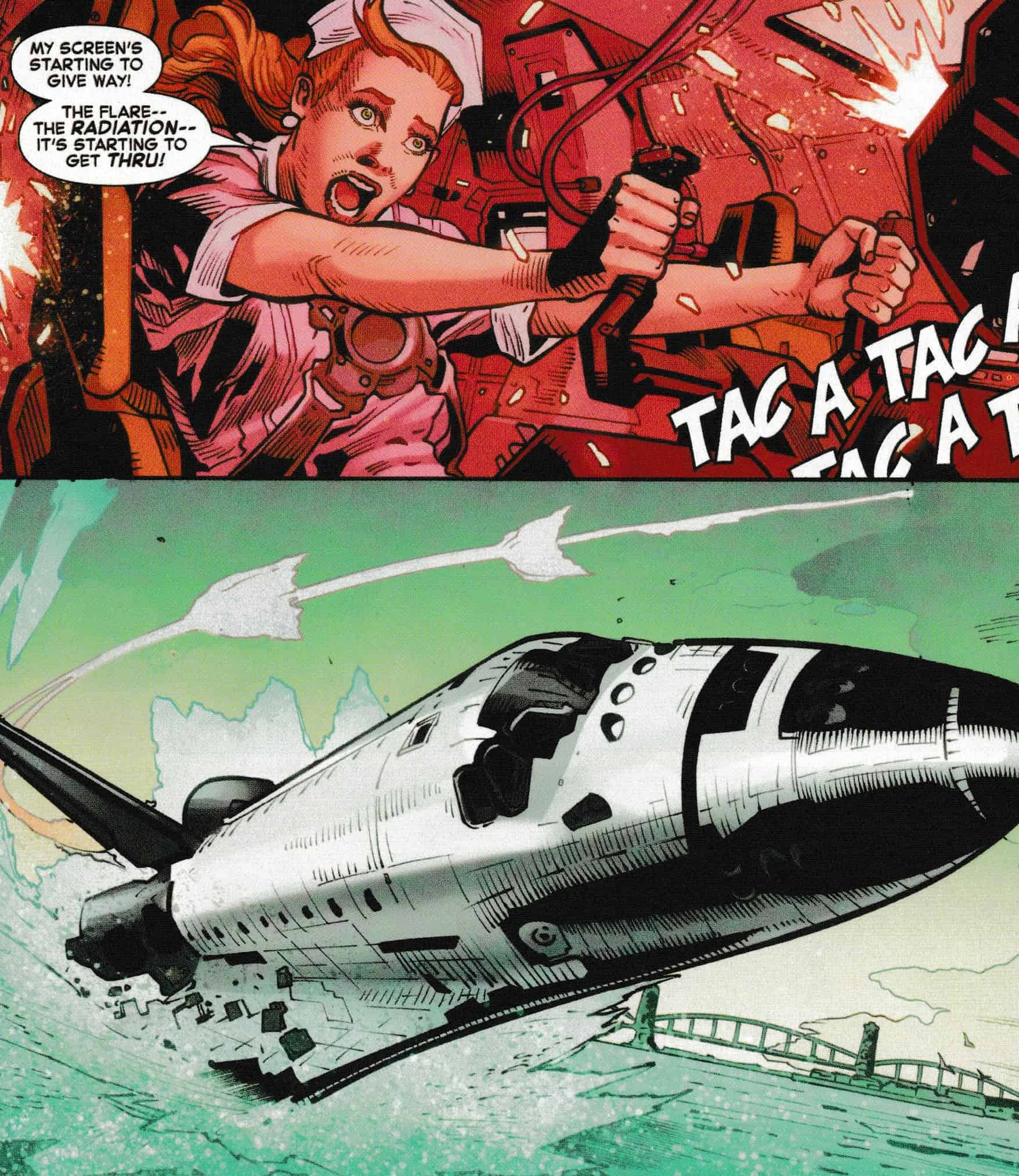 In the Cockrum Hill Cemetary, a handful of X-Men are checking on Jean’s casket.  After all, they need to know if it’s Jean or the Phoenix who’s back.  There’s a little debate between Dani Moonstar and Beast over what to call her…or it.  But when they open the casket, there’s no doubt.  Jean’s body is gone.  They need Cerebro, but even if Beast can repair it, they need a psychic to operate it.  Kitty knows where one more is.

Jean needs her car fixed. The mechanic is a Mr. Patch (can you guess who that is?).  She vents to him but when he gets maybe a little too close, Jean freaks out, with tools flying off the workbench into Mr. Patch.  She tries to help him but the wounds are already gone.  He just heals real fast. 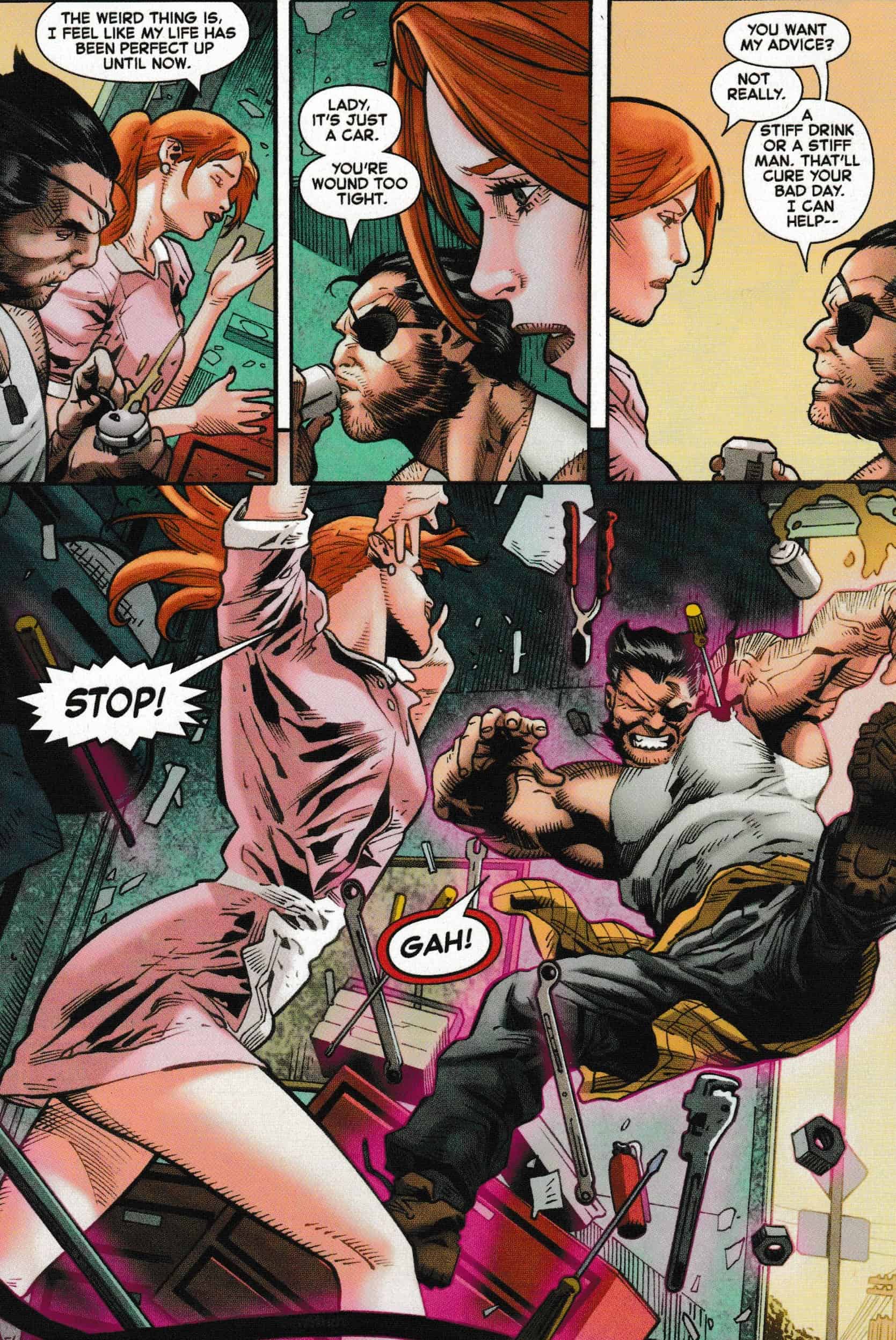 In London, Kitty finds Emma Frost, the last psychic they know of.  But Emma doesn’t need Cerebro to find their next target.  She knows of a particular moment that meant a lot to Cyclops and if it meant anything to Jean like it did to Scott, she’d be there.  At a bluff in New Mexico.

Jean runs home.  Something is chasing her, moving slowly but surely, like a creature that can barely be seen.  Jean locks herself but then the doorbell rings and there’s a knock on the door.  Suddenly everything erupts into flames, burning away.  The Phoenix needs to talk. 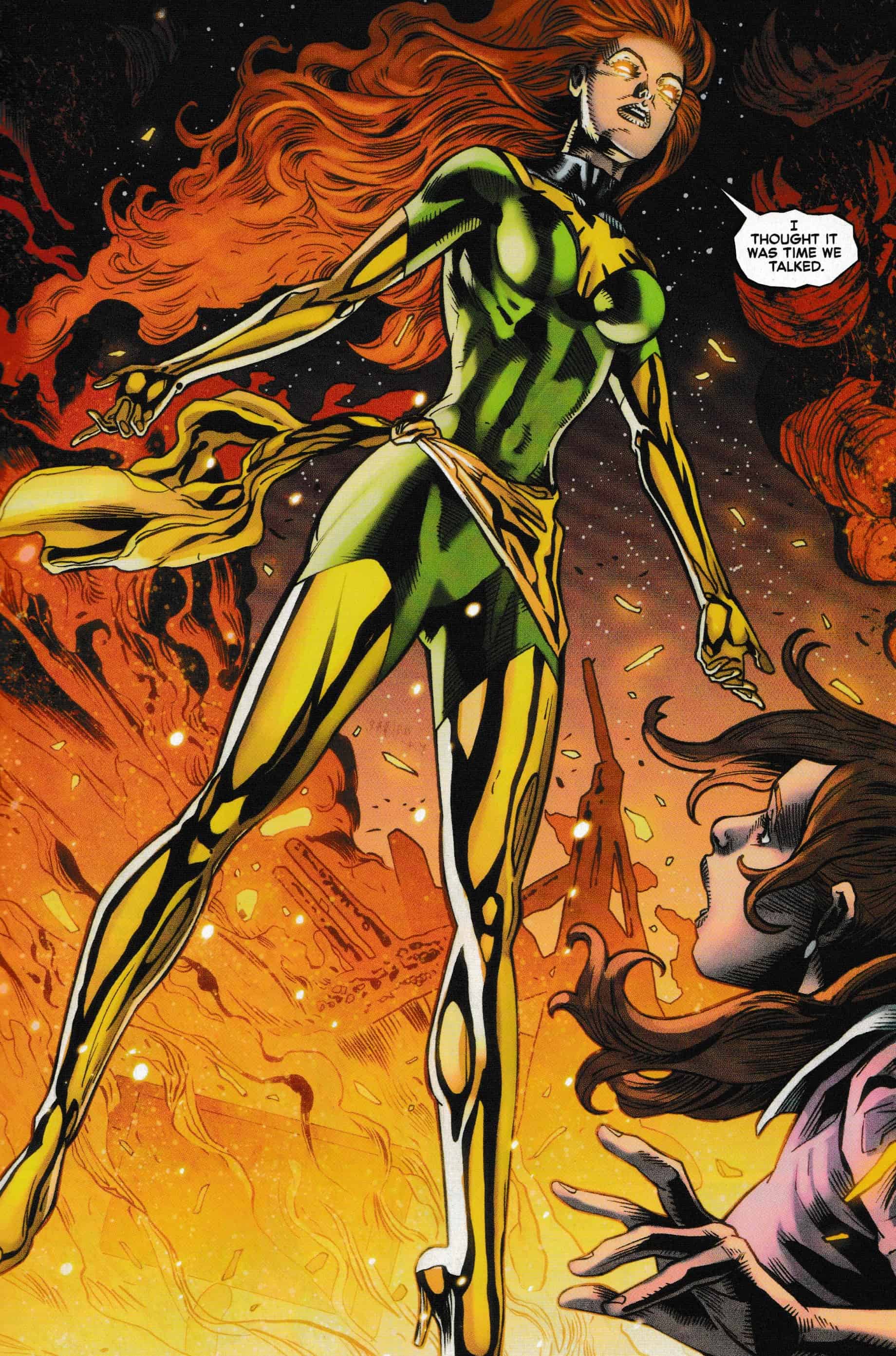 In New Mexico, almost every single X-Man is on the bluffs where Phoenix and Cyclops had one of their most intimate moments, where she first was able to hold back his optic blasts.  But there’s nothing there.  Everybody is in favor of leaving.  There’s nothing there.  But Magik senses something.  Something is making them want to leave and she slashes her sword through the air to reveal another world.  The X-Men are left to wonder…what’s on the other side?  And do they go through it?

Rosenberg certainly knows how to write a compelling story.  Each scene is important as it continues to set things up.  As a single issue, this may be tiresome, after all, where’s all the action and the big reveals, and everything that people expect from summer blockbusters?  But I think Rosenberg is crafting a tale here, not to be read and enjoyed as a single issue but rather to be read as a complete story.  Sure, that means we have to wait three more weeks, but I really do believe it will be worth it.

This issue starts to give some answers and maybe some continuity gaffes (I’ll get into them in a minute) but considering the problems the Phoenix continuity has had ever since the retcon that made Phoenix and Jean two separate entities, I’ll forgive the small errors here.  And honestly, they can probably be explained away so it’s really not that big of an impact.

The same can be said for the little cameos we have in these books.  You can nitpick things to death, sure, (such as Banshee not being dead even though everybody else Jean encounters is) and Dazzler in her older costume, not keeping up with all the changes to the character, but remember that they’re not the point of this story.  So let’s forgive these little trespasses to our anal retentiveness that often comes with hardcore geeks (this also includes Magik somehow slicing open the air when her sword supposedly only works on magical enchantments and the Phoenix is cosmic, not magic…see what I mean about nitpicking).

Rosenberg certainly knows his stuff too and there’s plenty of things to keep us satisfied; from naming the cemetery “Cockrum Hill”, to the familiar tac of the radiation on the shuttle, to cameos by Darwin and Wolverine’s “secret identity” Patch and even (I think) Gateway.  We even get a little bit of Wolverine’s creepy infatuation with Jean and a reminder that she’s not having any of it.

We’re also teased a little bit when Mr. Patch proclaims that they do have earthquakes…it’s just been a while.  I have to wonder if Jean has been here the entire time since Endsong?  Will that be answered?  Or just another fan theory?

The art is probably the weak point, but it’s only when compared to the previous two issues.  Bennett is competent enough an artist, but after following Yu and Pacheco it just seems a little bland.  But it doesn’t distract much from the story which is incredible.  Each book leaves me craving more.  Rosenberg has done his job well.

Final Thoughts:  Rosenberg is giving us an amazing story as he begins to tease at the answers but still leave us wondering what’s next.  And I’m more excited than I have been in a long while to find out.  Two weeks is way too long to wait!