REVIEW:  Phoenix Resurrection #4  (“Cracking Open the Egg of the Phoenix”) 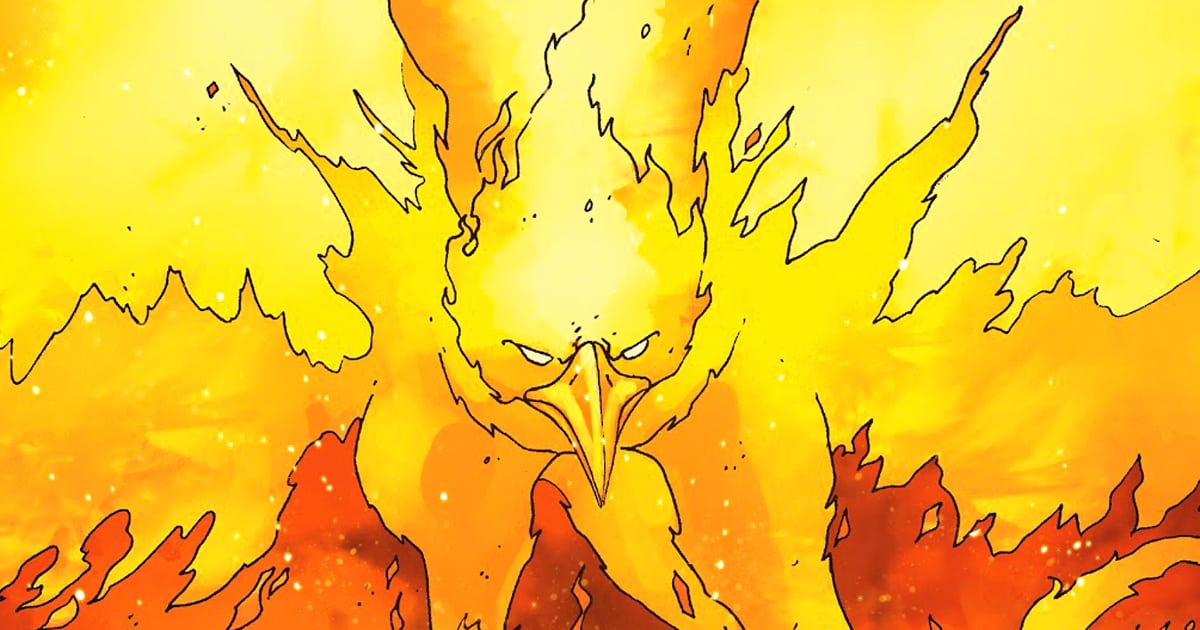 The X-Men are closing in on Jean but the Phoenix wants her for itself.  Can the X-Men survive in the demonic neighborhood long enough to find their long lost teammate? 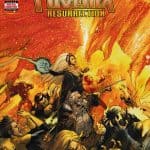 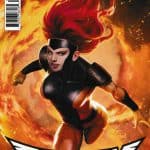 The Phoenix has returned.  Jean Grey’s body is missing.  All of the X-Men’s psychics are either missing or unconscious.  Jean Grey seems to exist as a mundane waitress surrounded by dead people.  But she’s being stalked by fire and destruction and finally confronted by the Phoenix masquerading as Jean.  The X-Men are tracking her and find a hole in space leading into a giant egg in the middle of New Mexico.

Jean awakes in a burned out house but she doesn’t seem aware that anything is wrong.  She walks to work like nothing is wrong, passing her newspaper boy (Jay Guthrie), a woman sitting on her porch (Feral), a boy riding his bike (Tag).  As she passes, behind her, out of her line of sight, the entire neighborhood is engulfed in flames.  But it’s not behind her.  Every time she turns around, she sees only the happy greenery.  It’s clear at this point, Jean is under some sort of control so that she only sees the pleasant neighborhood. 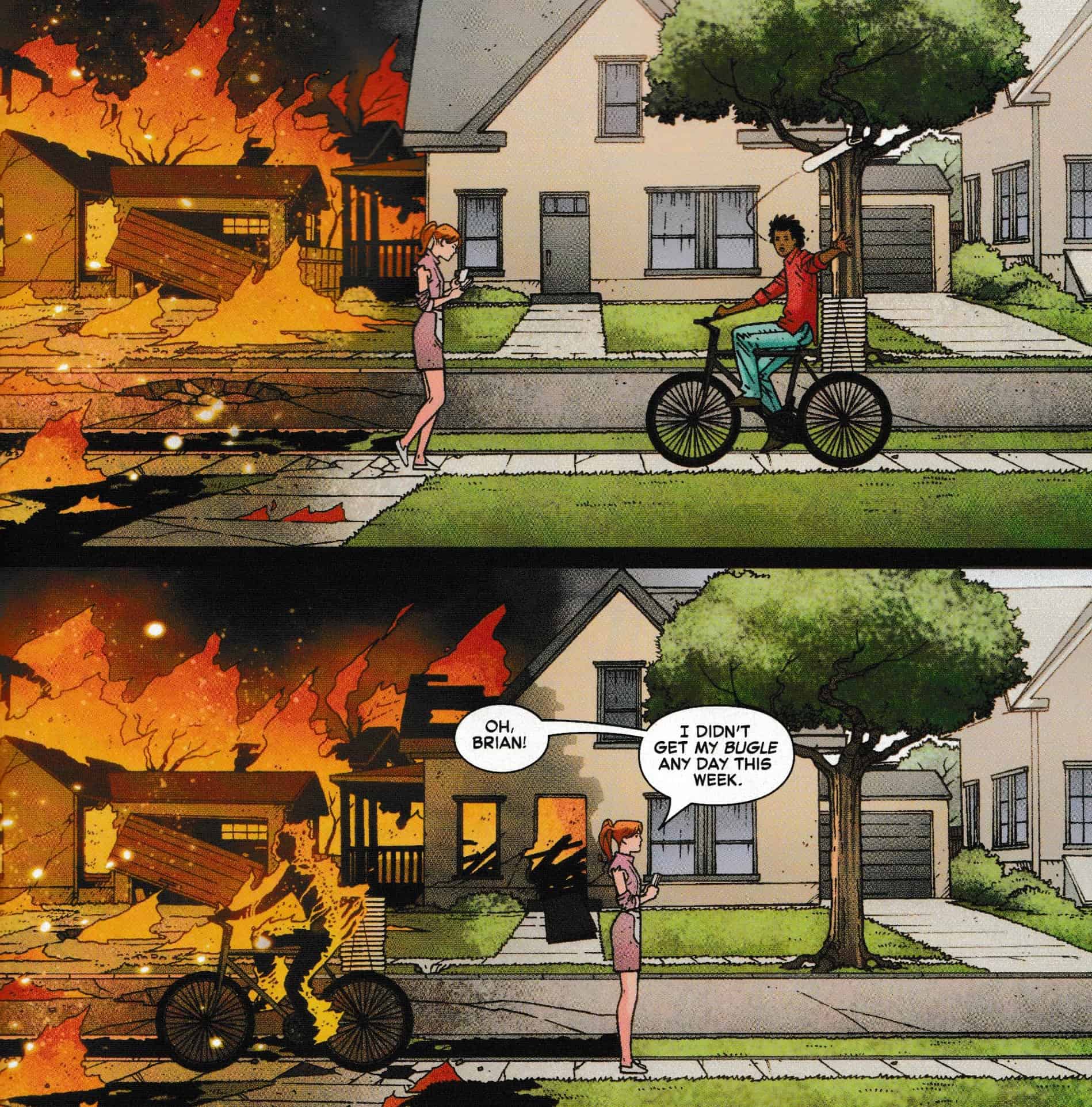 In the real world, in the bluffs in New Mexico, the X-Men stand at the opening to the monstrous egg.  Do they go in or don’t they?  Old Man Logan isn’t one to stand there debating so he just walks on in.  Right into an inferno.  There are dead bodies everywhere.  After exploring the carnage, the X-Men encounter a crowd of deceased associates which are reminiscent of the mysterious foes that had plagued the X-Men over the last few issues.  The X-Zombies attack.  It’s a ferocious battle, but Kitty knows this is just a distraction.  She takes a handful of X-Men to try and explore more while the battle rages on.

She’s not sure what she’s looking for, but when in the middle of the fires she finds a single diner that appears untouched, she knows this is it.  Jean comes out, taking out the trash (literally…although this expression comes back for some confusion a page or two later).  She doesn’t even notice the X-Men there, although she seems to hear them as a whisper.  But she turns and walks back inside.

Outside, Hank approaches Kitty and the others.  The X-Zombies had vanished, leaving no traces.  Hank goes on to explain his “theory” (hypothesis actually, which Hank should know the difference but this is so commonly screwed up, I’ll forgive it).  The Phoenix is back and wants to merge with Jean once again.  It’s found other hosts that haven’t worked as well and so it’s back for one of its most suitable hosts.  But Jean has rejected it before so the Phoenix resurrected her and placed her in this egg to prepare her.  But since Jean still believed she was in the alternate reality it meant she was not yet ready to merge with the Phoenix.  There was still hope.

O5 Beast and current Beast (boy does that get confusing) surmise that Jean is fighting back somehow.  The manifestations in the real world were Jean pushing against the Phoenix.  And so Storm commands that if Jean is crying out for help, they go help her.

But the Phoenix has other plans as it plants a giant fiery foot on top of the diner.  The X-Men are ready to attack, but something occurs to Kitty.  They’ve done nothing but fight since they’ve made it into the egg and they’re about ready to fight a god.  But what if the Phoenix wants them to fight?  What if it wants to spin the violence into a way of convincing Jean to merge with it.  So instead, they need to do the unexpected.  Send somebody in to talk to her.  One person.  O5 Cyclops volunteers but Logan steps up instead.  Teen Cyke doesn’t know this Jean.  This Jean, if she comes back, will have all sorts of memories and experiences that Teen Cyke can’t hope to deal with.  Logan was also in love with her.  And he remembers her like this.  So he goes instead.

The one thing I was afraid of, this book manages to avoid…for the most part.  I was worried we were going to get more mystery leaving only a single issue for a wrap up that would be way too quick.  And this issue instead gives us several answers along with the knowledge that the climactic finale is to come.  A single issue wrap-up (really two issues since it will spill over into Jean Grey #11) is now entirely feasible.  But sadly, it wasn’t a perfect issue.

The art was actually rather distracting in that it was entirely uninteresting.  It felt lacking in detail for most scenes (not all…the half-fire/half-green opening was fantastic).  It’s definitely the weakest of the series so far when it comes to art.

And I felt Hank’s explanation of what was going on was just too easy.  It wasn’t that it was simple…it was that Hank somehow knew this all.  Now, maybe we can submit a no-prize and explain that Jean is subconsciously feeding this information to Hank.  Sure, that’ll work.  (I have the same problem with Kitty knowing they shouldn’t fight the Phoenix)

But beyond the art and the easy explanation, the issue was another work of excellence I’ve come to expect from Rosenberg.  It had the creep factor (seeing Tag catch on fire and the dead Feral sitting up were creepy) and the slow build up that we’ve been seeing and yet despite 3 prior issues of this, I didn’t feel tired of it.  Every issue we get more and more and now we finally know what’s going on.  But it’s not just thrown out there like “here you go, I’m done”.  It’s a well-crafted story arc, one that is ultimately intended on being read in a single sitting.

And now that we know what’s going on…  I’m going to inject a little fan hypothesis of my own…  I think Annie is the representation of the Phoenix.

I’m also glad to see that Rosenberg didn’t bring up the White Hot Room (although there’s still one more issue) because that stuff is just crazy and gets certain fans all riled up.  Rosenberg definitely addressed the two as separate entities, not as Phoenix-equals-Jean.  Which also will probably rile some fans up, but I always preferred the two as separate entities.  I mean sure, we still have Jean-is-the-favorite-host but I can live with that (even though Rachel seemed more compatible).

It’s an excellent book.  Not without its flaws, but definitely worthy of this series and of X-Men fans in general. 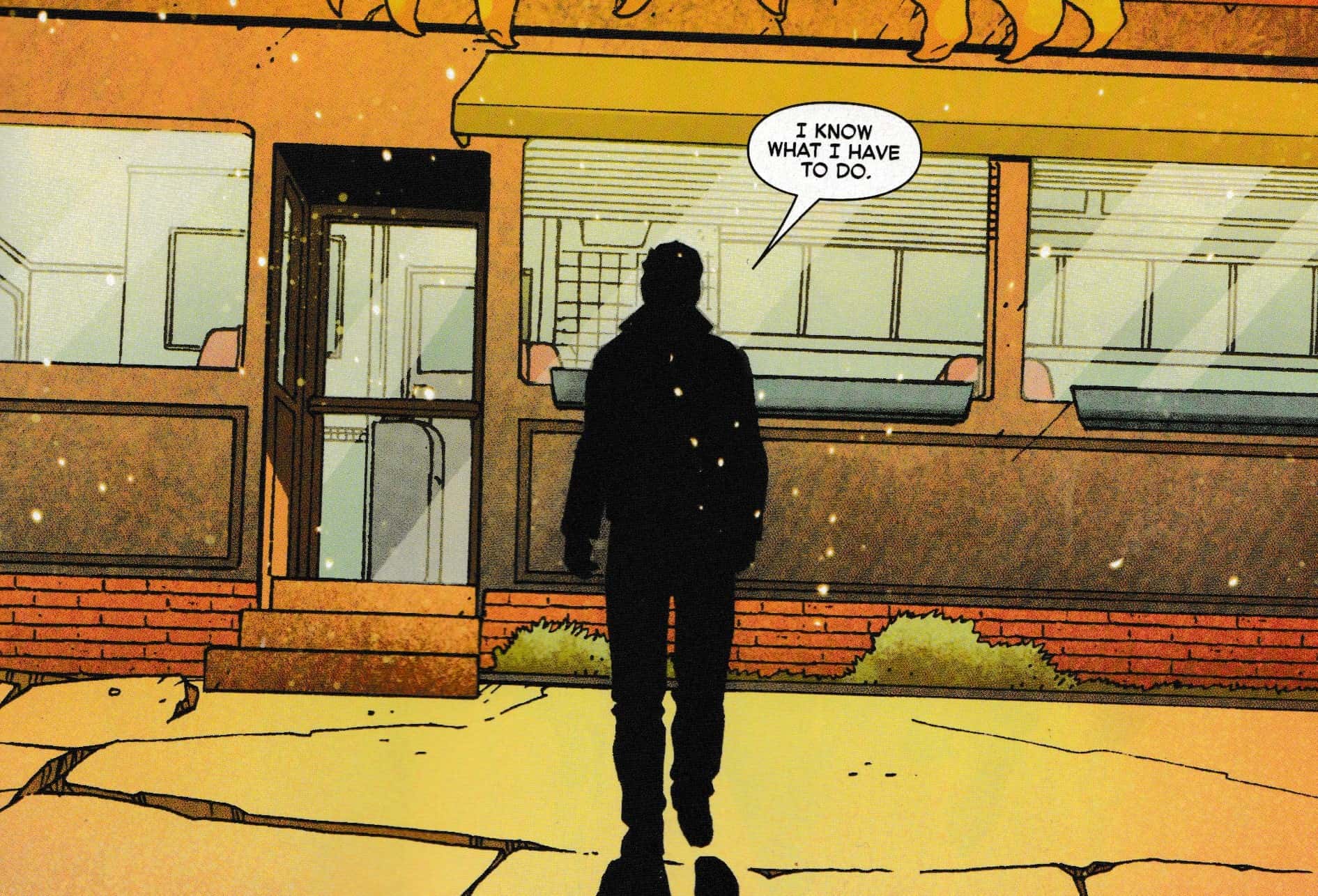 Final Thoughts:  Matthew Rosenberg gives us many of the answers we’ve been clamoring for in another outstanding outing for the Phoenix.  Issue #4, like the other 3 before it, will leave you wanting more, upset that it will still take a whole week to find out how it turns out.