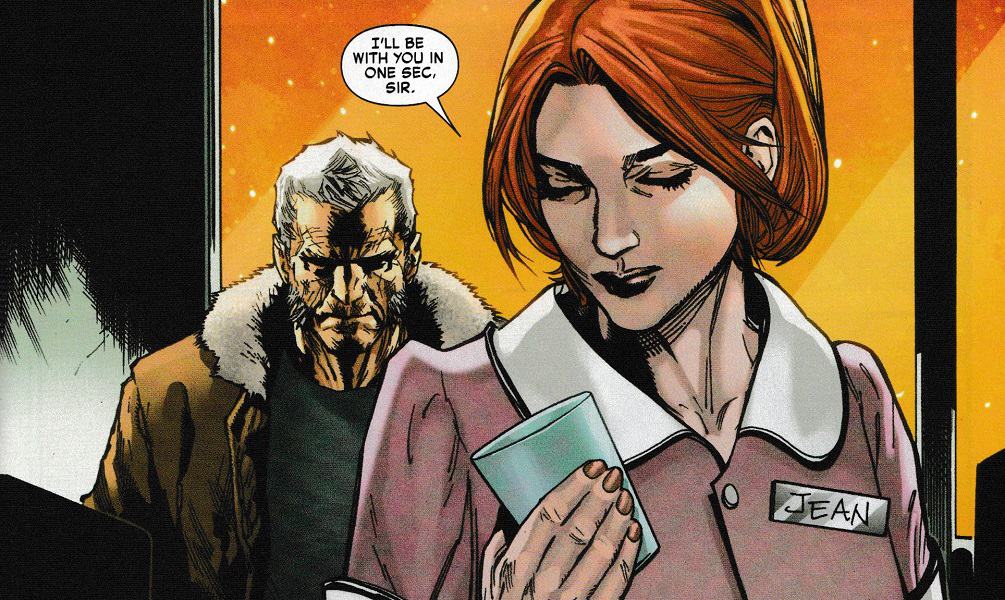 Jean is back.  But so is Phoenix.  As the X-Men confront her, which one will push back?  And will anything be left standing? 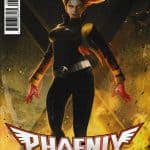 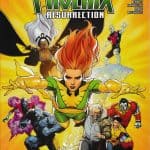 The X-Men have been searching for Jean.  Her body is missing.  The Phoenix has returned.  The X-Men find Jean as a waitress inside some pocket dimension in New Mexico.  Logan decides he should be the one to try and confront her and snap her out of this.

Logan steps into the diner and is offered some coffee.  He sits and accepts it and strikes up a conversation with waitress Jean.  But when he starts asking her to remember, Annie, the owner of the diner, tries to intervene.  Logan tells Jean that she must know none of this is real.  But when Jean refuses to see the truth, Logan slashes through Annie’s neck, dropping her to the floor…and then he casually asks for a refill on his coffee. 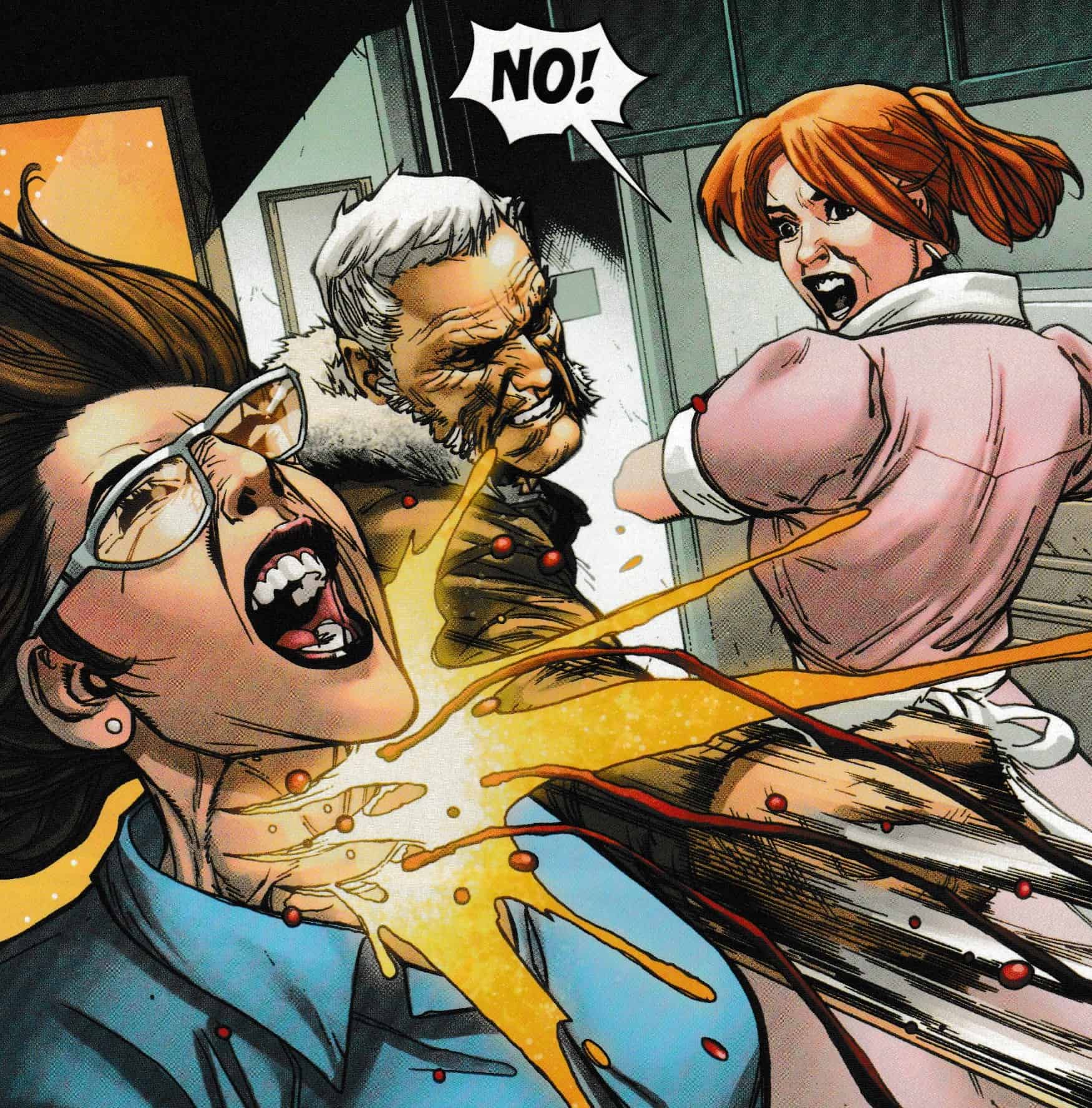 Jean is shocked.  But even more shocked when Annie stands up.  Logan asks Jean if she finally remembers.  The answer is “yes”.  And then the diner explodes as a bird of fire erupts from the inside, tossing a burned Logan out like he was a crumpled up piece of overused paper (which isn’t far from the truth, but I digress).  Jean/Phoenix (in a new, awesome black/red color scheme) steps out and lands in front of the X-Men.  She greets both Storm and Iceman.  She sees the young Cyclops and is a little confused.  But when Beast questions who she really is, Jean/Phoenix doubles over as the Phoenix bird is expelled from her. 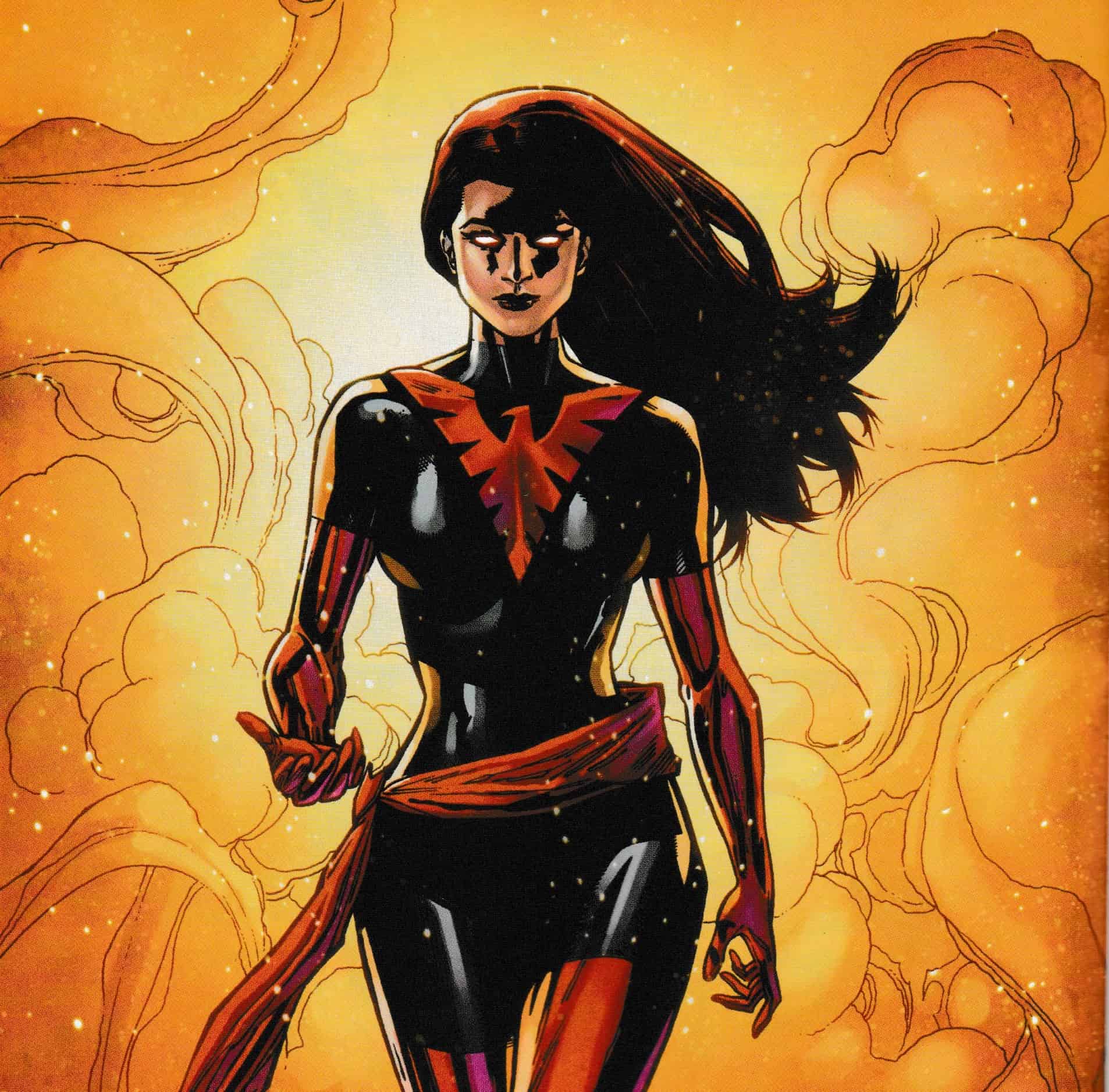 Jean is none too happy, tired of dealing with the Phoenix.  It confronts her, once again in the form of Annie Richardson, Jean’s friend who died at age 12.  The Phoenix is offering the return of loved ones.  Jean says she doesn’t want anything from Phoenix but then the Phoenix shows Jean her parents.  And the rest of her family (who were all slaughtered by the Shi’ar).  But the sight of this is too much.  She blasts away the illusions (if that’s what they are) and screams at the Phoenix that it has nothing left to give her.  But she may be wrong as a figure steps from the fiery haze. 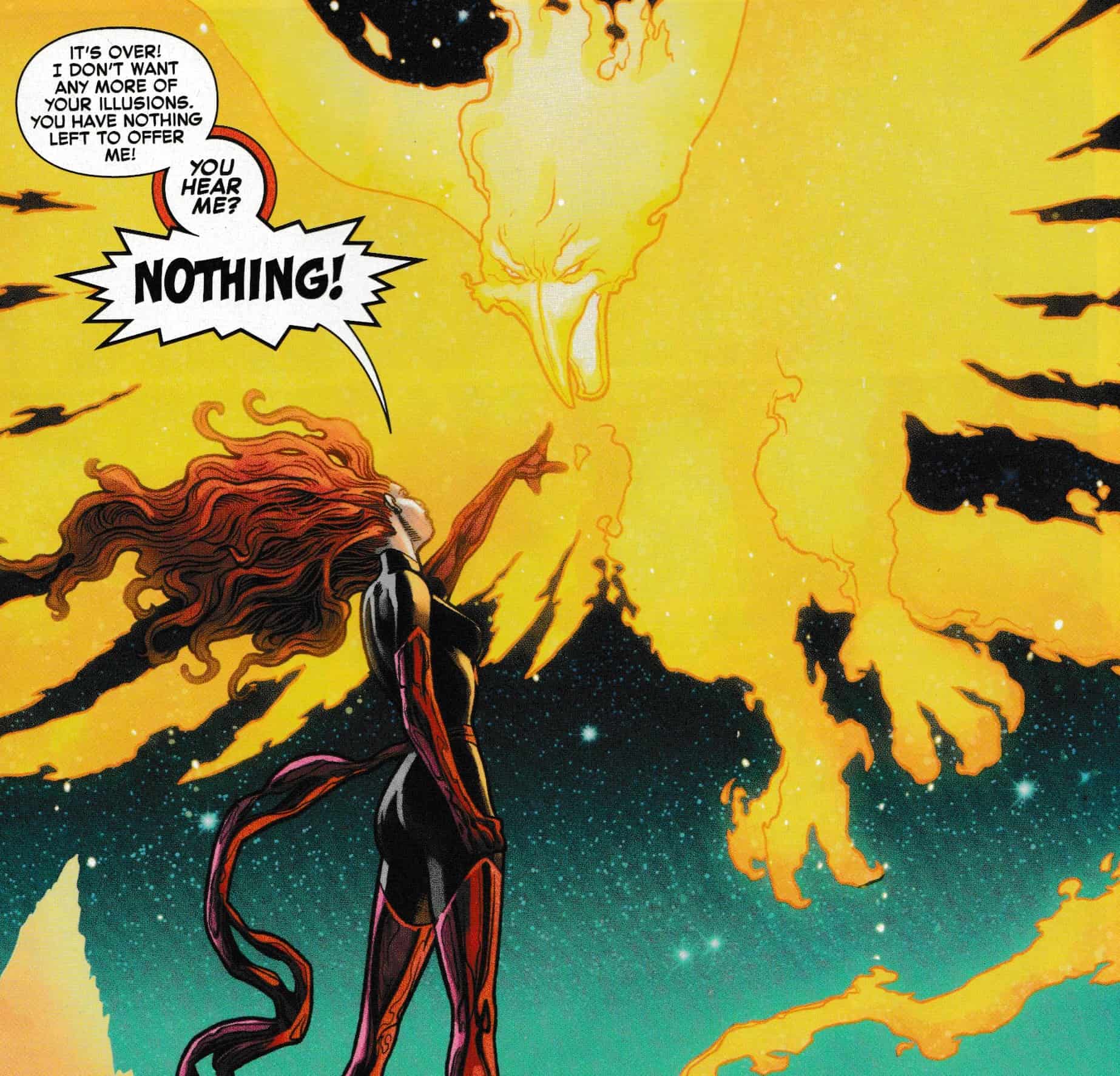 Jean blasts away Cyclops too.  But when he gets back up, she realizes that he’s not an illusion.  He really is Cyclops, Scott Summers, the man she loves.  They embrace and she asks him to take off his visor so that she can look into his eyes once more.  She holds back his optic blasts and they kiss.  He apologizes to her and she whispers to him “We were better off dead”.  Then he begins to decompose still in her arms.  And she kneels beside his body, she looks up at the Phoenix with fire in her eyes.

The Phoenix made a mistake…It tried to tempt Jean with Cyclops, but that was exactly what she wanted to be strong.  To hold him one more time.  And now she will have no more of it.  Despite the Phoenix’s best arguments, she rejects the cosmic bird.  And finally, the fire shrinks and eventually dies in her hands, leaving her kneeling over her dead husband with the X-Men standing around her. 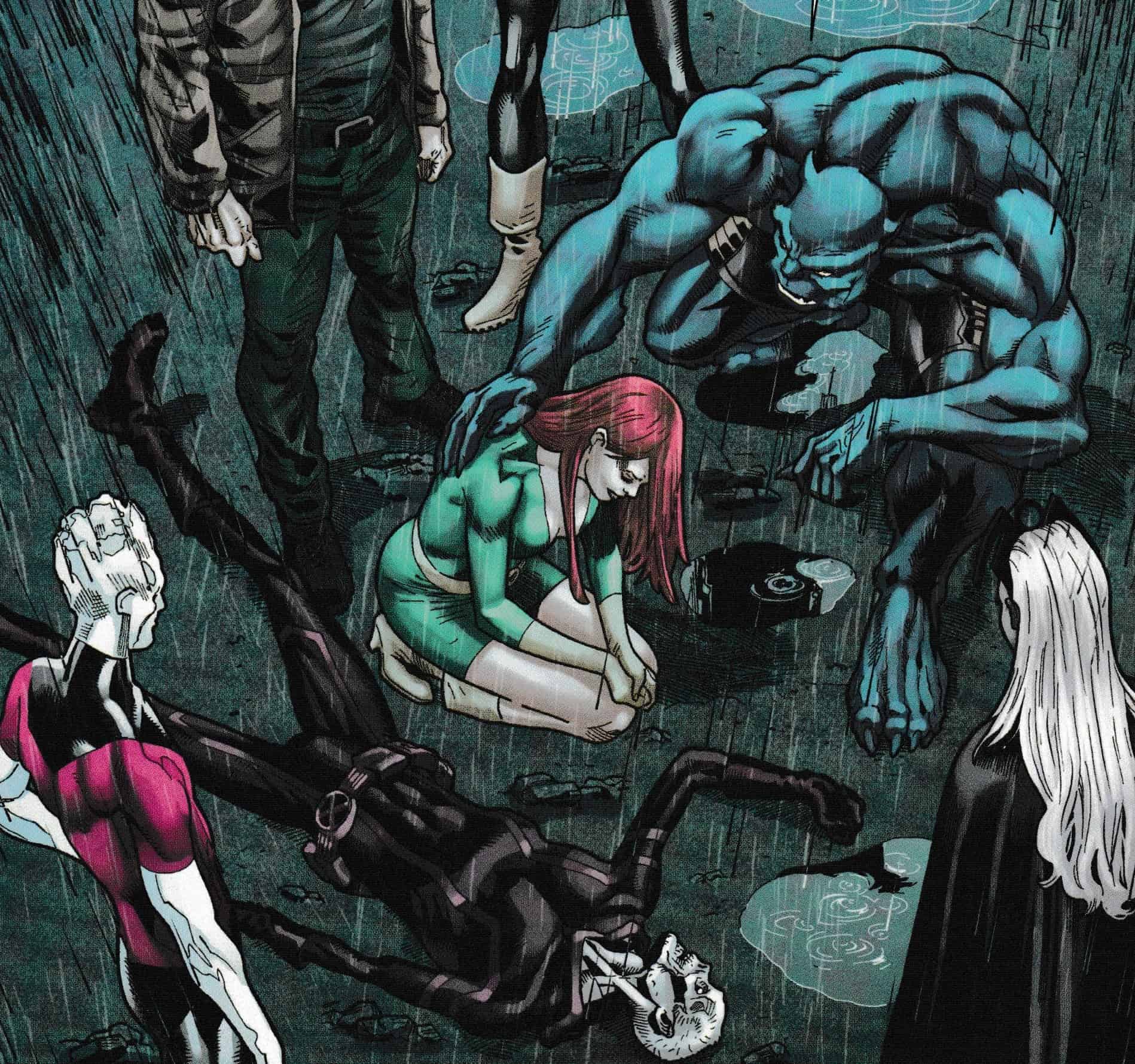 It’s been a whirlwind 6 weeks for this story to wrap up (or maybe 13 years, depending on how you look at it).  I’ve seen people that hate it, seen people that love it.  And the best thing I can say to those is this:

This was never an X-Men story.  It was never even a Phoenix story.

And that’s why this wasn’t some big battle between the X-Men and the Phoenix.  The fact that some of the little details (such as wrong costumes or Hellion having his hands once again) were completely irrelevant.  We shouldn’t care.  And maybe some people did, but I didn’t.  And the end of this story (not counting the Jean Grey #11 epilogue) justified my views on every single one of these books.

See, Rosenberg didn’t need to tell some big action piece to bring Jean back.  Instead, it was all about who Jean was.  She wasn’t the Phoenix.  She was Jean.  And that’s the story that so many have tried to tell since X-Factor #1 and many have forgotten.  Jean is awesome on her own!  She doesn’t need to be Phoenix.  She’s much more interesting on her own.  And I think Rosenberg realized this.  Just like someone leaving an abusive relationship (and let’s face it, that’s what the Phoenix was), you need to be on your own, to find out who you are.  You can’t keep falling back into the same traps as before. 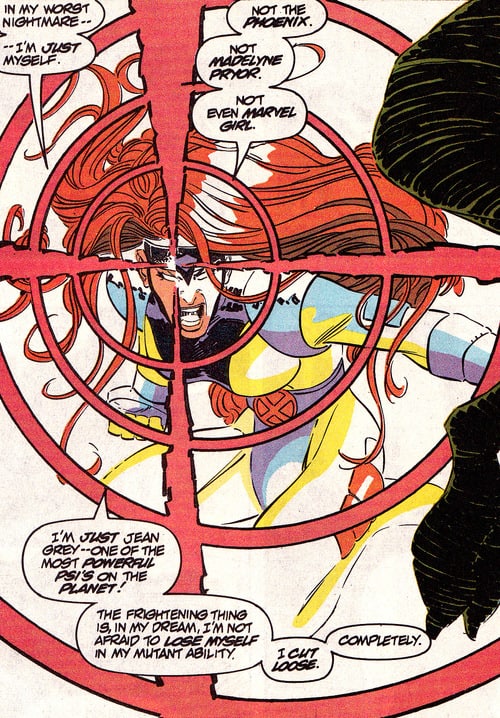 The book itself was nothing short of amazing.  The art was a little inconsistent (it comes from having two entirely different artists work on it) but I was so enveloped in the story I didn’t even notice it until I read it for the third time.  The colors are striking (the Phoenix especially) and the red/black color scheme was wow.  Part of me is sad to see Phoenix gone because we won’t get that outfit.

The story was emotional too.  From Jean seeing the young version of her husband to Jean realizing that her parents and entire family were dead.  But perhaps the most emotional part was when she saw Cyclops.  The conversation they had, the sorrow at the mistakes he had made.  When she lifted his visor, it was a beautiful callback to the famous scene so many years ago (I know that wasn’t technically Jean but she did possess those memories after the events of Inferno).  And then to have him taken from her again…was heartbreaking. 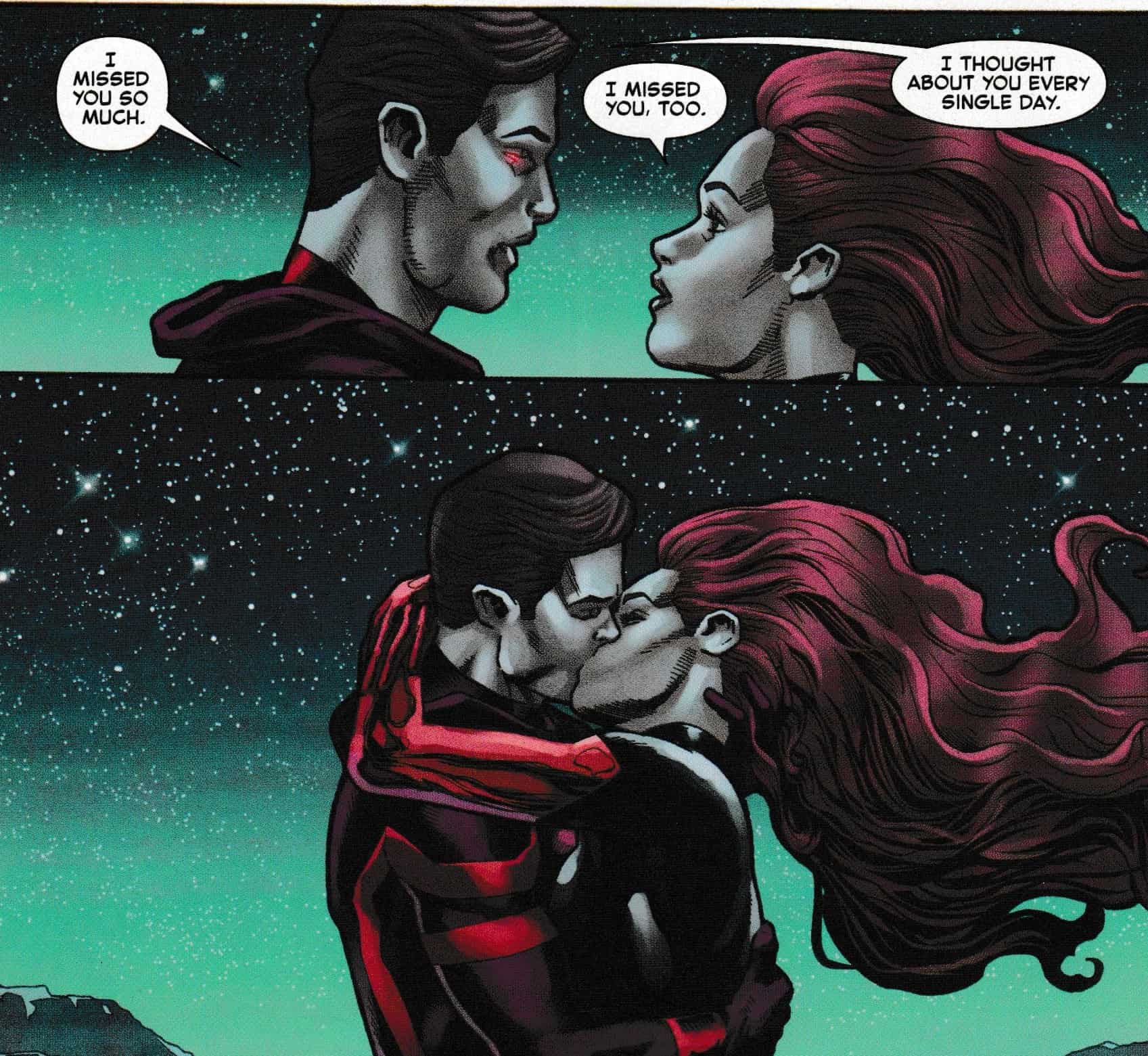 But I’m glad he didn’t return as well.  Because this is Jean’s story.  And just like someone leaving an abusive relationship, she needs to be alone (I know I’m repeating this but it needs to be said).  Even if she does love him.

But it’s still sad.  And honestly?  I haven’t felt this strongly about a comic in years.

Final Thoughts:  It’s a rollercoaster of emotions but Rosenberg handles it perfectly, giving us the Jean story we needed, even if it’s not the one many fans wanted.