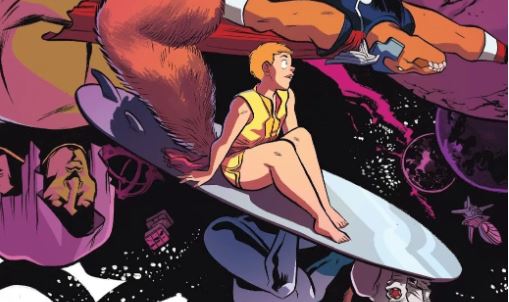 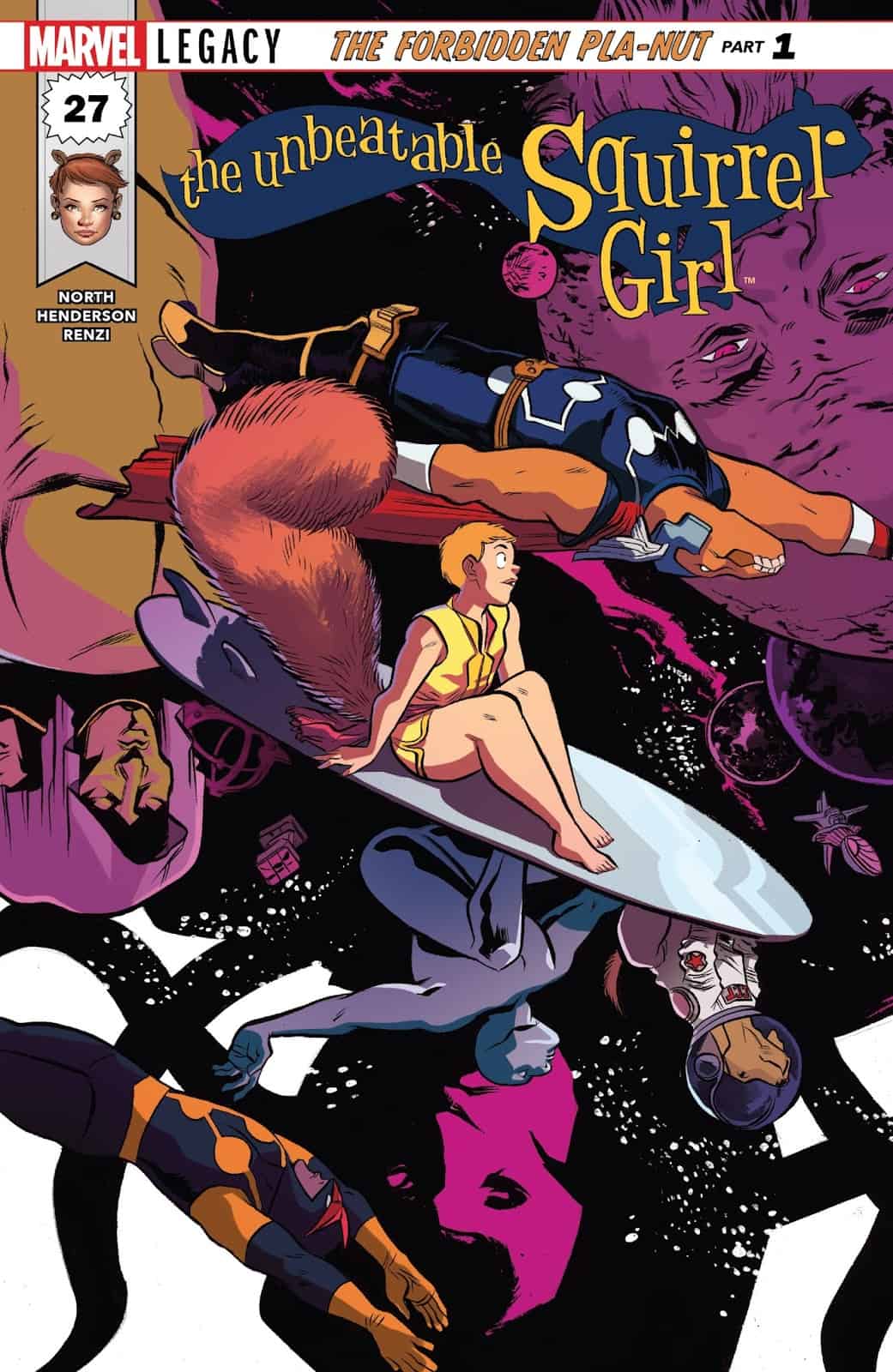 Squirrel Girl has her share of detractors but I’m here to officially tell you they’re wrong.  If you’re growing tired of traditional superhero punch ’em ups and seeking a book with brains and a huge heart, this is it.  Not to mention the quirky sense of humor!

Squirrel Girl is the kind of hero who prefers to resolve issues with words instead of her fists.  Most of the time she succeeds, when she doesn’t, look out!  She will beat you. If you need further proof simply check out the original graphic novel The Unbeatable Squirrel girl Beats Up The Marvel Universe.  ‘Nuff said.  That isn’t pertinent to current events it’s just really good.  But what is?  Galactus, Devourer Of Worlds!  That’s what.

Once upon a time, Galactus came to feed on the planet Earth.  Old news right?  Nope, because that time he was met by Doreen Green, A.K.A. Squirrel Girl.  Doreen was the first person ever to approach the most powerful being in the universe as an equal and provided him with a better alternative; an uninhabited world covered in nut-bearing trees.  Along with Doreen’s best friend Tippy-Toe the squirrel, they feasted and in the process forged a strong bond of friendship.

The Forbidden Pla-Nut part 1 opens with Doreen, Tippy, and their friend and roommate Nancy Whitehead studying while having snacks.  To Tippy’s confusion, Doreen begins questioning her about the details regarding their defeat of Galactus, suspiciously stating to not leave out a single detail.  Nancy leaves and runs into Brain Drain, a former Hydra experiment who is basically a super smart brain walking around in a robot body.  His incognito disguise is hilarious.  Oddly enough he also has questions about S.G.’s victory.  Later in her physics class, Nancy is given a very Galactus-centric pop quiz.  Nancy finally catches on to the fact that something clearly isn’t right.

After class Nancy finds Tippy hiding from Doreen’s questions.  The two decide that things are indeed wrong when Doreen jumps out of a window screaming that Galactus is coming and Brain Drain walks up to suggest that they perform the same actions as last time.  They are then surrounded by people causing Nancy and Tippy to proclaim that they won’t help.  To which Doreen replies that it was a waste of time and to shut it down.  Suddenly the hologram fades and Nancy and Tippy find themselves in a barren room and still surrounded, only now by a bunch of green squirrels.  The squirrels reveal that they’re on the planet Chitt-crrt and their people are called the Chrrt-chuk.  The Chrrt-chuk abducted Tippy to learn the secret of Galactus’ defeat because their world would be his next meal.

Meanwhile on Earth Doreen and many of her squirrel friends search desperately for the missing roommates.  Their efforts prove fruitless so Doreen comes up with the even more desperate plan of finding someone who can communicate with Mew, Nancy’s pet cat who was the sole witness to their disappearance.  In a wonderfully failing montage, Doreen learns that Tigra, White Tiger, Black Cat, Kitty Pryde, Beast, and Hellcat, unfortunately, cannot talk to cats.  Hellcat, however, suggests she speak to Howard the Duck’s pet Biggs the Cyborg Cat.  It turns out that Biggs only conversational interest is to ask for pets so Howard then points Doreen to the Sorcerer Supreme himself Doctor Strange.  He also says to tell him that he wants the $17 he loaned him back.  Doreen seeks out the Sanctum Santorum only to find the new Sorcerer Supreme, Loki. 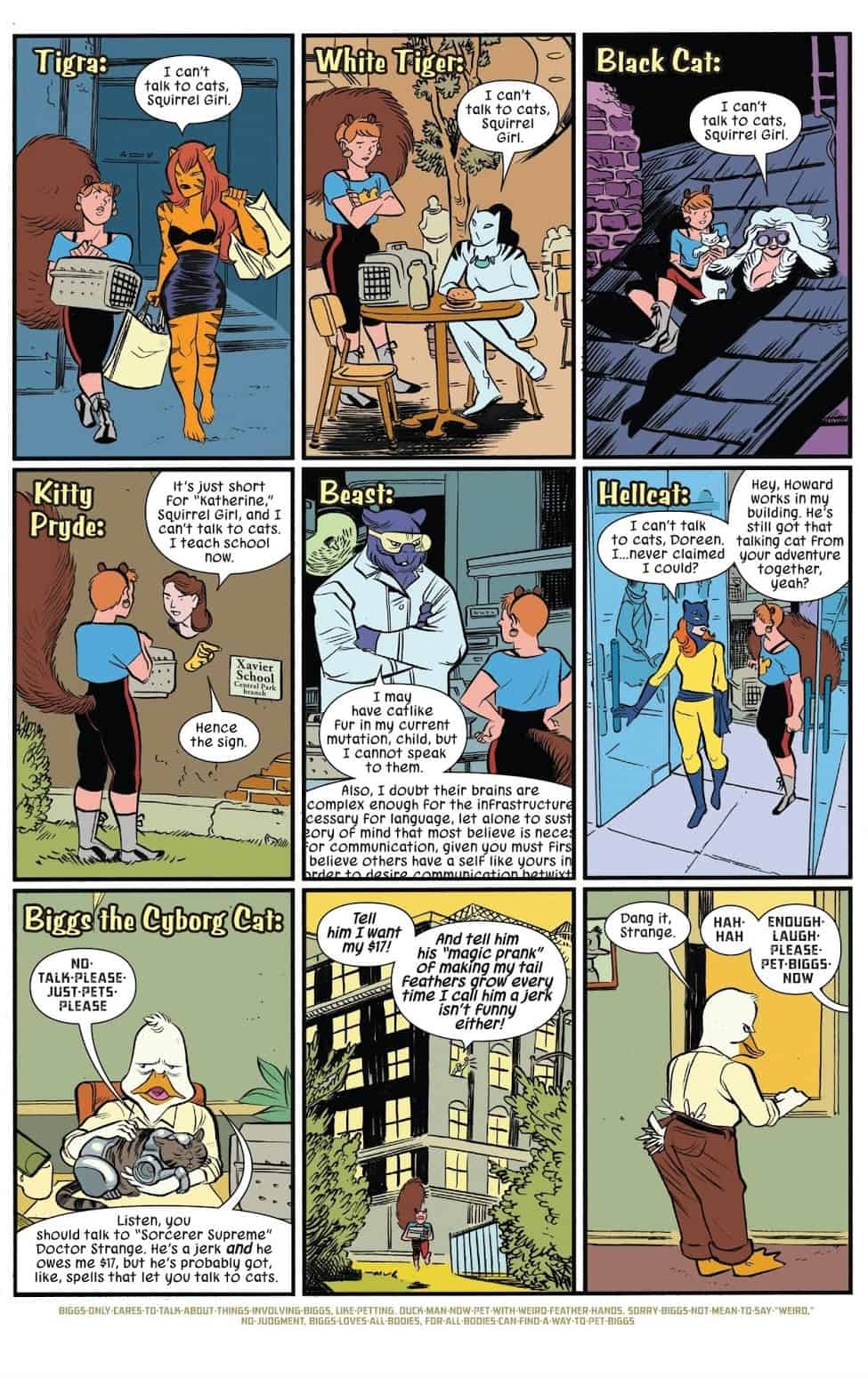 Back on Chitt-crrt the Chrrt-chuk inform Nancy that five days prior they were visited by the herald of Galactus, the Silver Surfer.  He and his entourage of meathead beach bums warn that Galactus is coming unless they give him all of their gold and jewels.  The Chrrt-chuk measure their wealth in only nuts and the memory of Galactus consuming one of their terraformed planets was still vivid so they devised a plan to learn the secret of defeating him from the Earthborn hero Tippy-Toe.  Nancy’s abduction was an accident caused by her close proximity to Tippy at the time of teleportation.  Nancy and Tippy explain that there is no secret but they’re positive that Squirrel Girl would find them. In the meantime, they would attempt to diffuse the bomb left behind by Silver Surfer because Galactus doesn’t like his food “mad chunky”.

Loki searches through the Sanctum’s library for a spell to communicate with cats but comes up short.  Instead, he casts a location spell and finds Nancy and Tippy on a planet somewhere on the opposite side of the galaxy.  After berating Doreen for her fashion sense Loki gives her a vaguely Asgardian-like outfit then prepares a teleportation spell.  Before he can recite the incantation Loki is attacked by an unseen force.  Loki casts a spell to see into other dimensions and they come face to face with the Dread Dormammu.  Not to be confused with Dorm Ammu who is currently eating as much food as he can in the university cafeteria to ensure he’s getting his $20 a day worth. 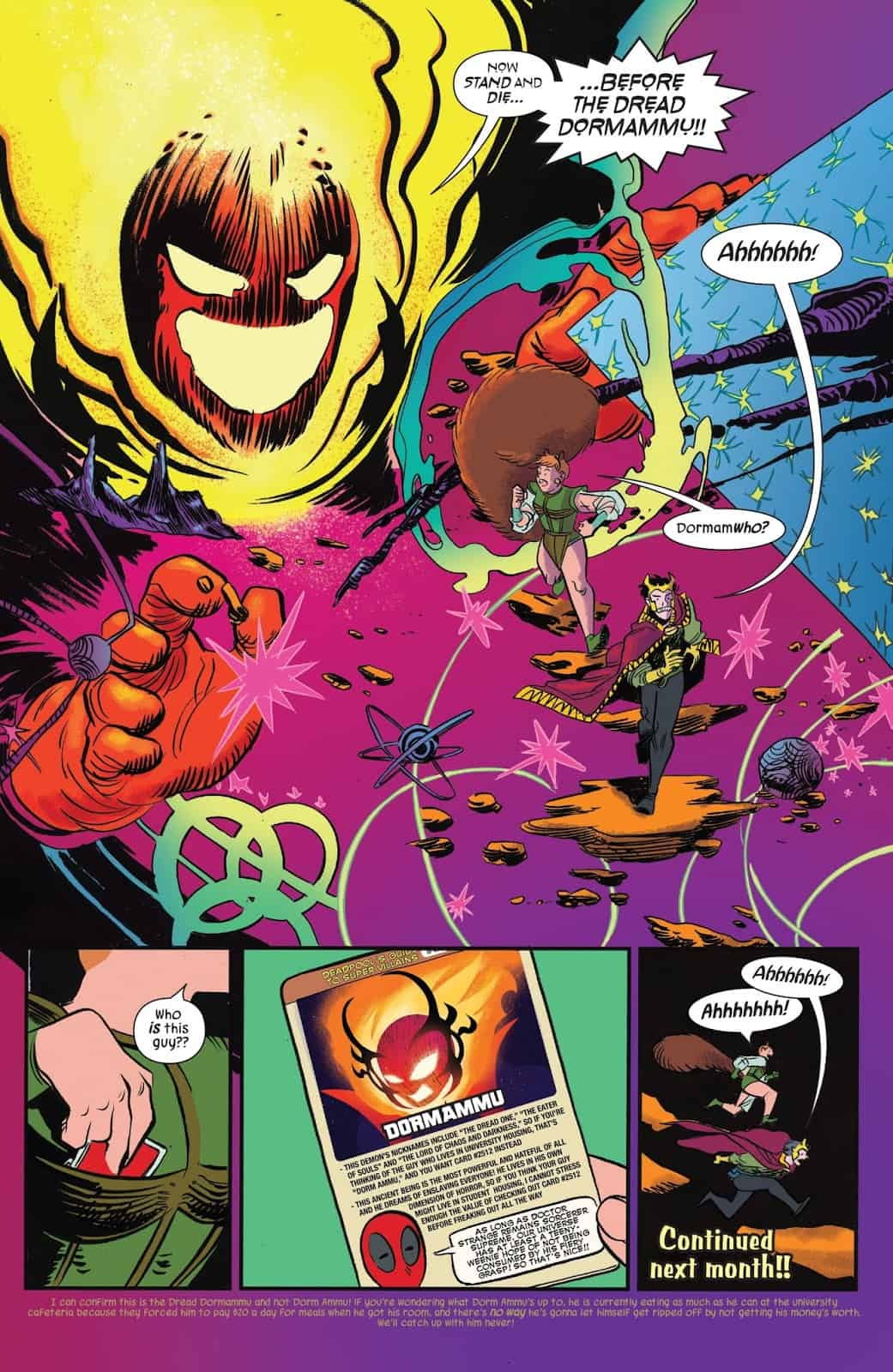 As usual, The Unbeatable Squirrel Girl doesn’t disappoint.  For a book with little to no action, it moves along at a brisk pace with Ryan North’s smart banter rushing you to the next panel.  The art of Erica Henderson, while not the best in the business, clearly contains much of her personality and all of the little visual gags she throws in ensures you inspect every inch of the page.  The focus on Nancy, who has no special powers or abilities is unique in the fact that the creators pay due respect making her a truly interesting character.  In my opinion, she’s the best peripheral, non-super character since Stevie Hunter way back in the pages of The New Mutants.  The Chrrt-chuk being green squirrels made my day and Doreen visiting all of the cat-themed characters had me laughing out loud.  It’s moments like these that make U.S.G. what it is.  Turning Silver Surfer into a literal meathead surfer dude was a stroke of genius.  Loki’s appearance was used to great effect and the reveal of Dormmamu on the final page was equally exciting and sad because it could be Squirrel Girl’s toughest confrontation yet and how will Nancy and Tippy make it home?

Squirrel Girl is one of those books that can appeal to almost anyone and the supporting characters are interesting enough to carry stories by themselves.  If you want to read about mutual respect and perhaps some computer science The Unbeatable Squirrel Girl is for you!