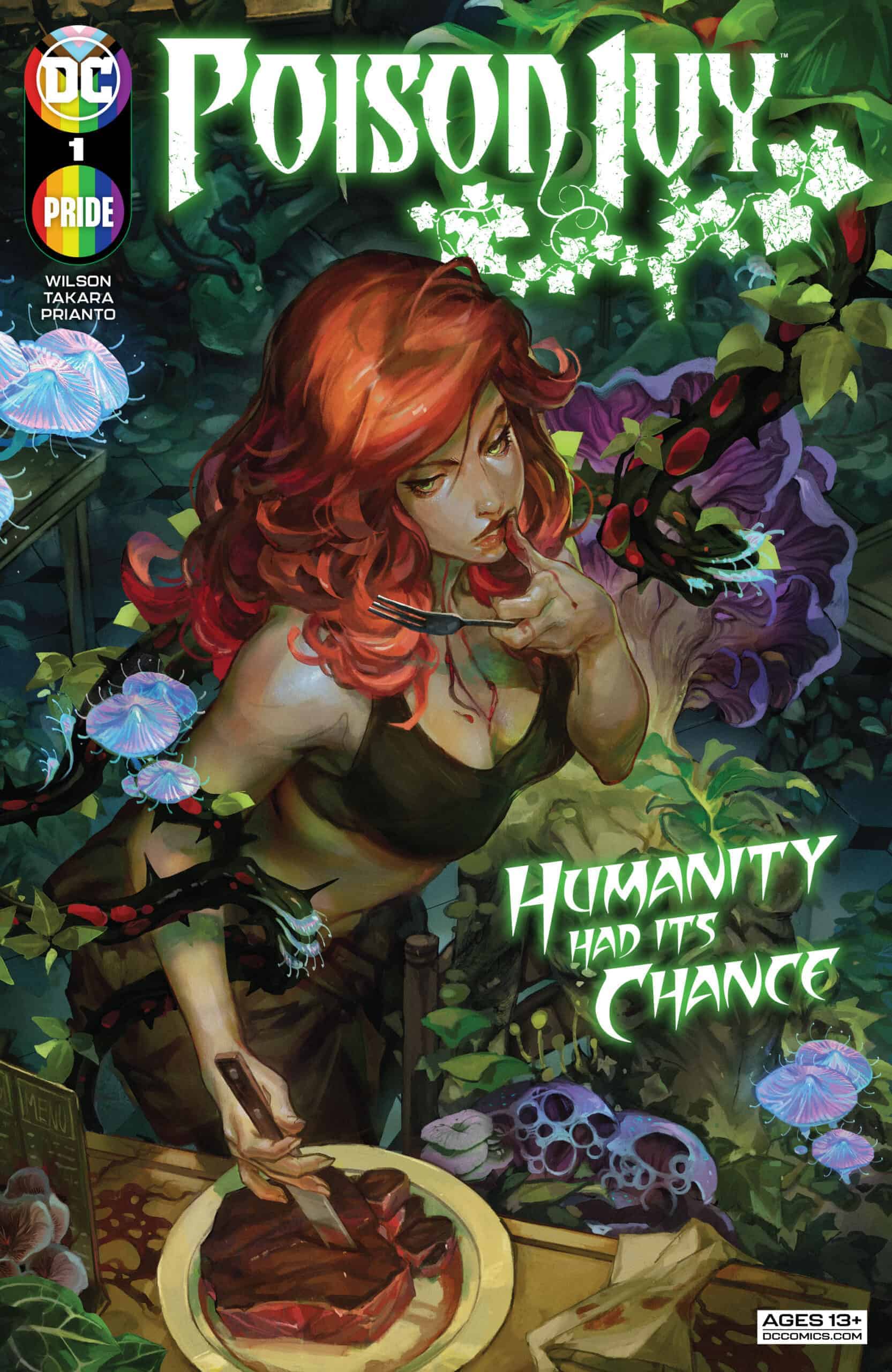 Pamela Isley has been a lot of things in her life. A living god, a super-villain, an activist, a scientist, and dead. In a new body that she didn’t ask for and with a renewed sense of purpose, Ivy leaves Gotham and sets out to complete her greatest work—a gift to the world that will heal the damage dealt to it...by ending humanity.

Whether G. Willow Wilson is writing about a Muslim girl in New Jersey (Ms. Marvel), a queer alien nun (Invisible Kingdom), or a doctoral student wrestling with the “Shakespearean authorship question” (The Dreaming: Waking Hours), her work often questions the nature of belief. Specifically: what happens when someone’s beliefs put them at odds with the world around them? Poison Ivy is no different, though its subject is a superpowered ecoterrorist bent on human genocide. Wilson walks a fine line, never pardoning Ivy’s sins but allowing readers to understand how Ivy could come to the conclusion she does and how she is able to reason with herself that her unsavory actions are worth carrying out. While the comic’s deadly psychedelic fungus may not exist in the real world, climate change resulting from humans (whose existence as an invasive species has a detrimental impact) certainly does. 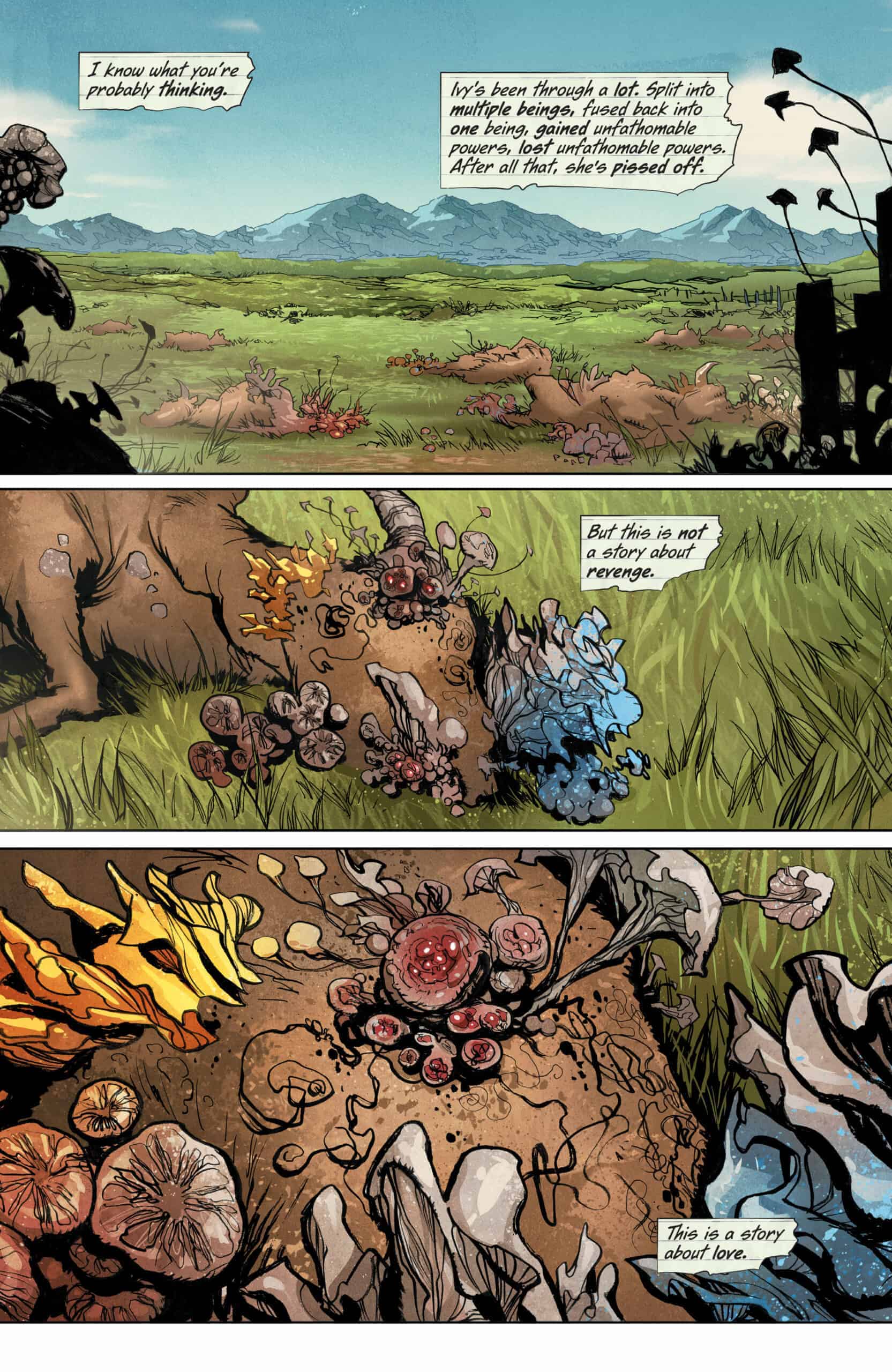 But Poison Ivy #1 isn’t just a “sympathy for the ecoterrorist devil” story. It is, as it claims to be, also a love story. It’s a comic that finds Ivy caught between her two loves: the environment and Harley Quinn. On both narrative and artistic levels, the comic feels almost overpowering in how it conveys Ivy’s yearning for Harley. It’s certainly frustrating to consider that this comic’s existence may be the reason Harley and Ivy have separated for the nth time, as queer joy in fiction seems too hard-won but queer tragedy is pervasive. With that said, Marcio Takara’s artwork of Harley and Ivy’s fraught final moments — mascara staining Harley’s cheeks, her eyes wide as we look down on her from above — is haunting. Ivy’s narration, written by Wilson, is a love letter to Harley. Perhaps one she’ll never send. Poison Ivy conveys what it means to miss someone and long for them with every ounce of your being. 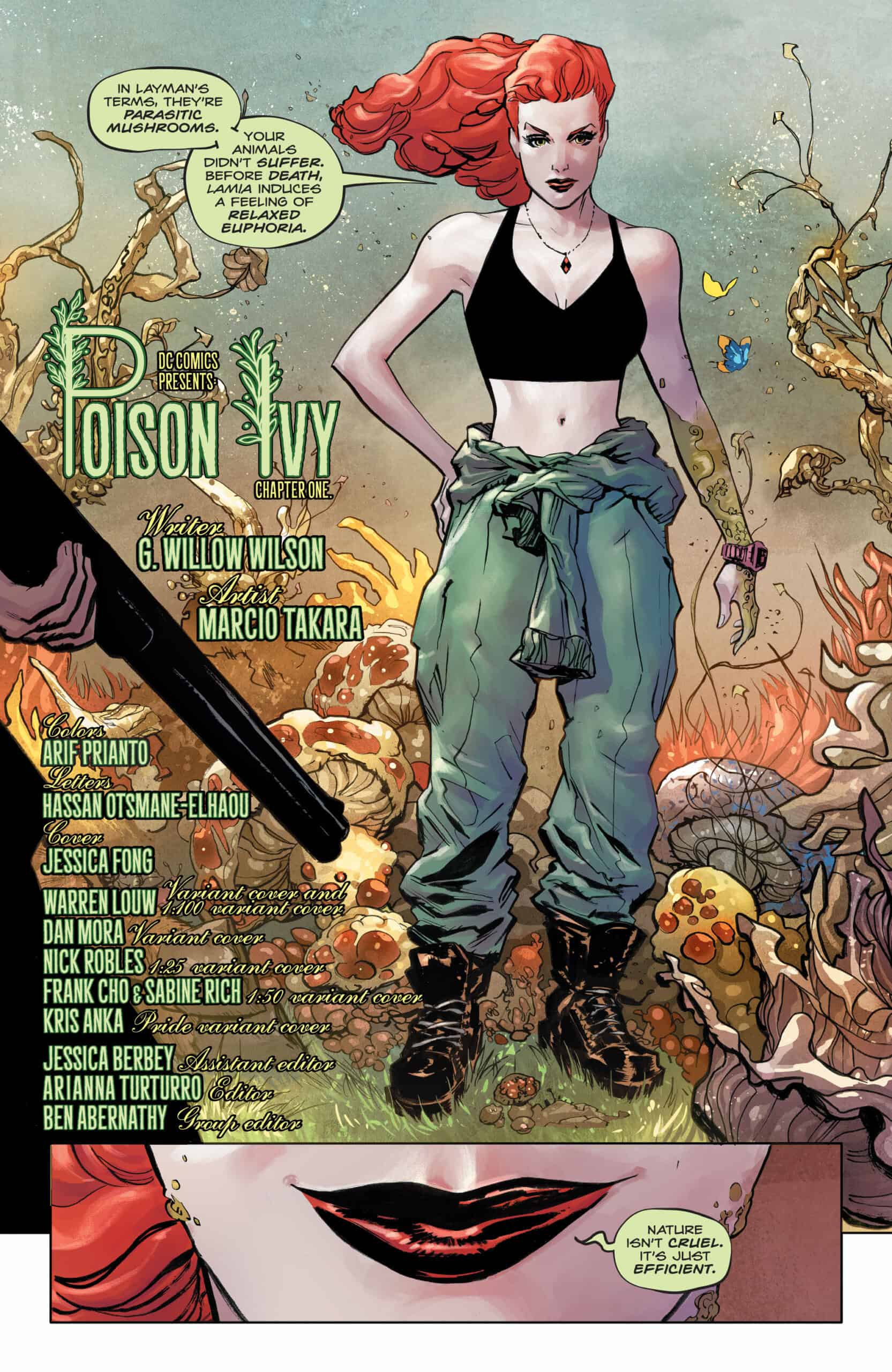 Beyond its ideological struggles and gay longing, Poison Ivy is also an elegantly crafted horror story. Ivy’s warmly lit memories of Harley bleed into the realistically-colored body horror of the present, with Takara drawing panel after panel of dying men and rotting corpses overtaken by psychedelic fungi. The peak of the comic’s horror comes in its final pages, Arif Prianto coloring Takara’s already disarming work with a palette reminiscent of black light paintings.

Poison Ivy #1 is an elegantly crafted work of psychedelic horror, ecoterrorism, and desire. Its visuals are sure to haunt you and its yearning will linger long after you’ve put it down.