Poison Ivy #2: Guess it’s Easier for You to Swallow if I Sat and Smiled 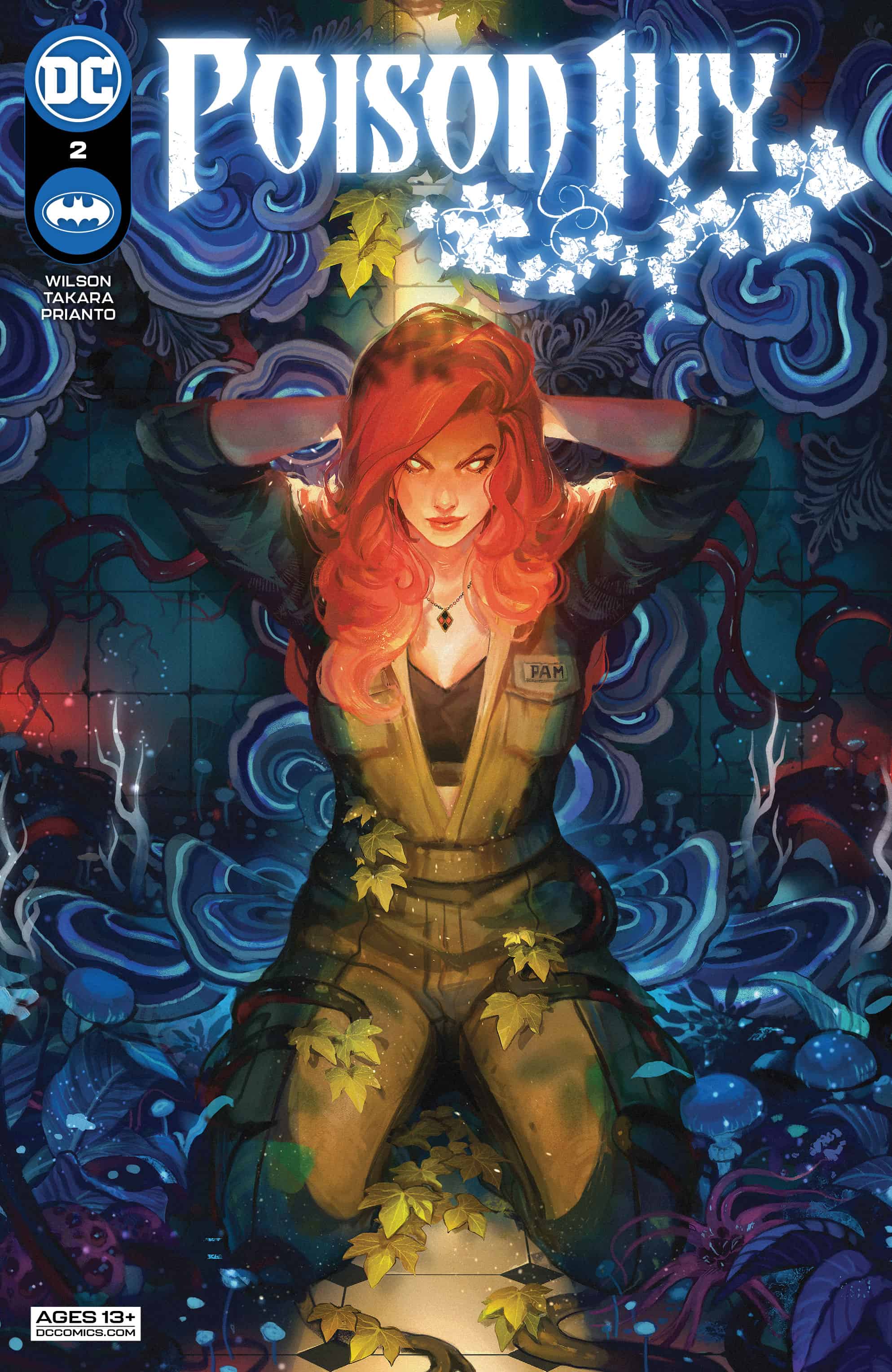 Destroying humanity is a lot of work, and a girl’s gotta eat! On her journey to doom humankind, Ivy makes a pit stop at a roadside restaurant, where she meets a hungry poet who makes her question her motives-at least until the cops show up. Ivy has left Gotham, but she can’t seem to escape the law!

It’s the second issue my fellow Calamine Lotioners (that’s the name I’m giving all of the Poison Ivy fans out there, so deal), and Wilson and Takara has definitely made me itch (sorry, I’m feeling particularly punny with this review). Ivy’s continuing on her trip westward bound as she continues to try to kill the human race with her magic mushroom death spores, and regain the power she had as Queen Ivy. As her journey continues, she’s meeting people that seem to slowly change her mind, or so it seems. It’s only the second issue, so if that’s all it takes to end this journey, it’s gonna make for a short opening arc.

G. Willow Wilson’s Ivy isn’t particularly pleasant thus far, which I’m completely happy with. She’s a character who has been…watered down over the years, making her more of an anti-hero/characters that live their lives in the gray area, but Wilson’s giving Ivy her the edge she’s seemed to have lost over the years. Is she a straight up villain here? I’m not sure, and that’s fine, because this is clearly going to be a journey Ivy has to take in order to properly heal from what happened to her in the Catwoman title during the Fear State storyline. Where she ends up might not be as important as what she discovers about herself on this spirit quest.

Wilson also seems to be setting up not only a potential supporting cast here, as well as laying the groundwork for confrontations between Ivy and Swamp Thing, as well as Batman, but also how Ivy’s new war on mankind will impact her relationship with Harley. Harley’s been on a path of her own since the Joker War to atone for her past sins, and if Ivy’s become a full on megalomaniac bent on destroying all of mankind, that’s definitely not going to be the best conversation starter for the very prominent LGBTQ+ comic couple. This relationship isn’t like the Bat/Cat dichotomy, Cat’s a thief, where Ivy has definitely murdered some people in a very gruesome way, so it’s gonna be a bit harder for people to be as forgiving with her.

Marcio Takara’s art here is…sublime to say the least. There’s a beauty here that you’d expect from a Poison Ivy comic, but there’s also some grit and a touch of horror and the macabre, which you’ll rarely get in a standard Bat-family title, but something you’d expect to see in one of the now defunct Dark line. The team’s taking us on a journey that will explore the depths of Ivy’s soul, and it looks to be dark, scary, and broken, where we’ll traverse from the mundane world, and the Green. How will the Parliament feel about Ivy’s actions? Will this possibly bring us into conflict with avatars of the Red and Gray as well? Ivy’s opening herself to a world that might be more than she’s able to deal with, and I’m here for this dark journey that awaits us.

Man is the most dangerous game, and Poison Ivy’s made it her mission to change that. Will the people she meets along the way change her mind, or will she unleash a horror on the planet unlike anything it’s seen before?

Poison Ivy #2: Guess it’s easier for you to swallow if I sat and smiled