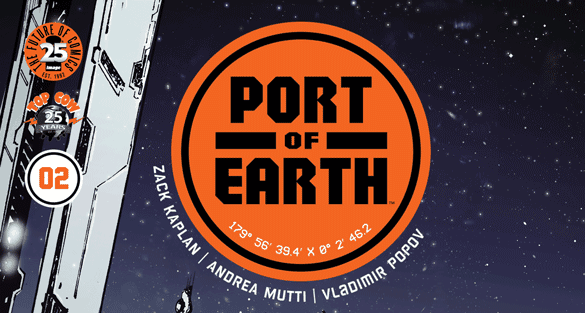 A dangerous rogue alien has ESA agents Rice and Mac on the run! If they aren’t careful though, their actions could affect Earth’s business deal with The Consortium…

One day, beside the Golden Gate Bridge just outside San Francisco, aliens made first contact. They came not in peace. Nor in war. They came with business. Calling themselves The Consortium, they offered humans a deal. In exchange for allowing a Port to be constructed on Earth that would use our ocean water to serve as a refueling station for space shuttles, The Consortium would offer the technology to solve humanity’s energy crisis. This was unanimously agreed upon and immediately set into motion.

After merely months, there were several hundred ships refueling at the port, though they all had to follow the laws established by The Consortium and Earth’s governments. These laws prohibited alien visitors from making contact with humans or even leaving the port. Their ships also had automated entry routes with designated no fly zones. These rules were quickly broken, however, when a dangerous alien escaped the port and a firefight broke out. Afterwards, sixty-two people were dead and over a billion dollars of damage had been done.

Now we know The Consortium wasn’t the “U.N of Planets”, they were actually a business like “Chevron”. The planet Earth quickly established the ESA (Earth Security Agency) in response. Though they weren’t allowed to kill visiting aliens without authorization, after thousands of casualties and a series of new incidents, The Consortium planned to visit Earth and offer assistance. Before they could arrive, a rogue alien was discovered by the ESA and agents Rice and Mac were briefed, armed, and sent out to capture it. After following its trail of bodies, they are led to a dark tunnel and a choice. To wait for backup, or disobey orders and chase after a red threat level alien alone….

In an exclusive interview with ESA Director Tom Rutgers, a conversation details the past experiences that began with first contact just six years ago. Throughout the process of creating and implementing the deal with The Consortium, humanity was led to believe they were the “U.N of Planets”, but the world now knows they are just a business conglomerate. After recent violent incidents, The Consortium offered negotiations where they denied human rights groups equal participation and requested specific organizations to be created in an effort to provide logistic and financial help, as well as security for the port. Continuing to believe it is in their best interests, humanity abides.

Over the voices of protestors, individuals like Harry Brickel of Exxon Mobil, Veronica Temple of Halliburton, Kent People of Boeing, and Tom Smith of Tesla were all recruited to serve on the board of ESA directors and negotiate with The Consortium on behalf of humanity. They established a naval blockade and protocols, but when the interviewer asks the ESADirector what their response would be if they were to threaten the deal by killing an alien in order to protect a human being, he responds grievously. Stating that The Consortium wants a port on Earth, and by protecting the deal, they are protecting the people. 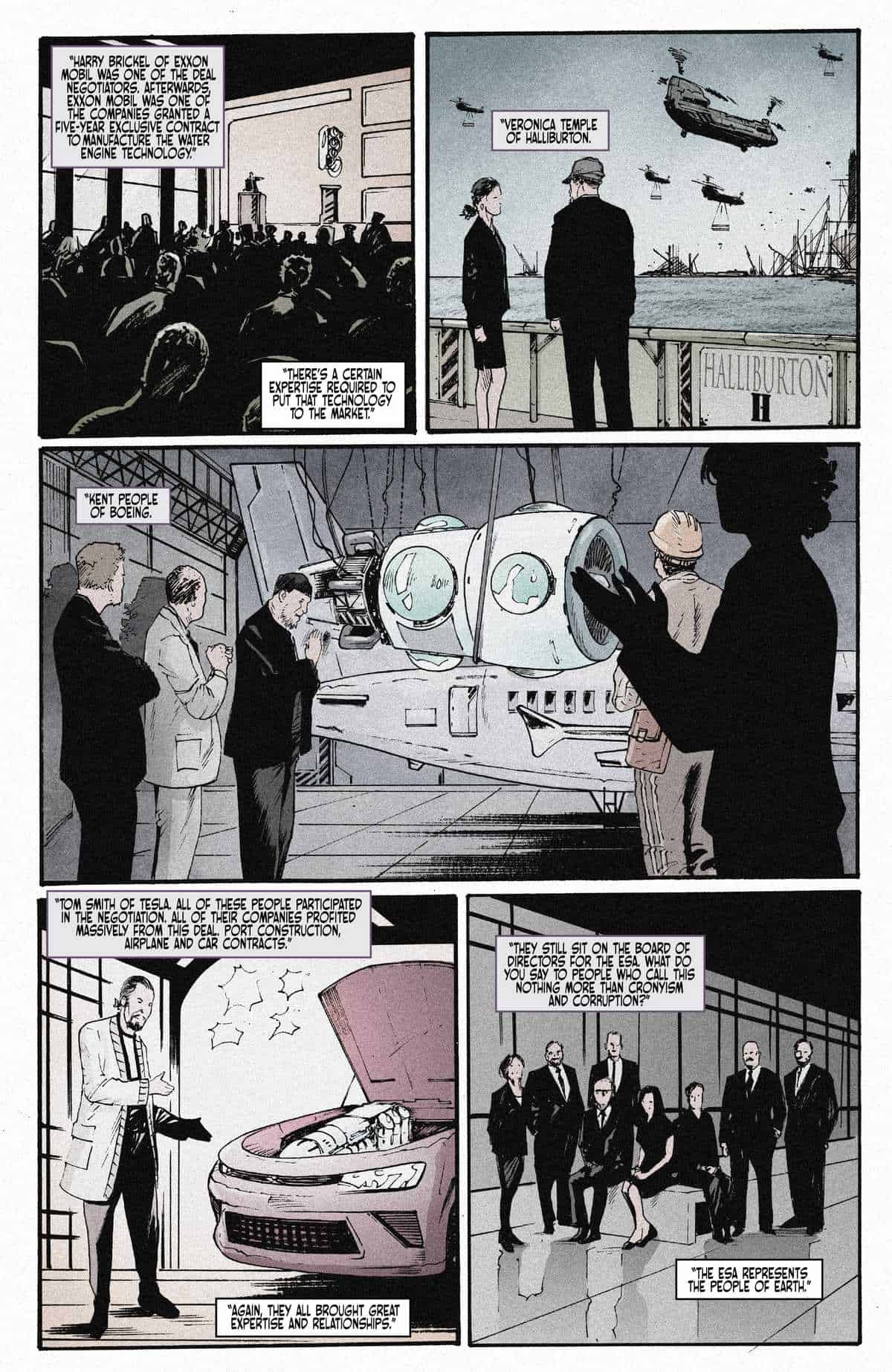 Back at the entrance to the tunnel, ESA agents Rice and Mac contact dispatch regarding their situation. They are being followed by drones still that record their every action. Despite a containment unit being in route, Mac decides to go in after the rogue alien. Rice reluctantly follows, describing the consequences of their actions while Mac details the worst-case scenarios of the alien’s escape. He believes they are there to protect humanity. That the alien they are searching for in these tunnels needs to die. As Rice explains the implications of killing an unknown alien, they encounter what appears to be something moving and fire their weapons immediately. With a bit of amusement, they see it is just a tarp. Just then they realize what is standing behind them. A horrifying alien with elongated extremities clinging to the top of the tunnel. Bearing its claws and teeth, it lurches at the two agents, hurling Rice to the ground while Mac follows behind firing his weapon. 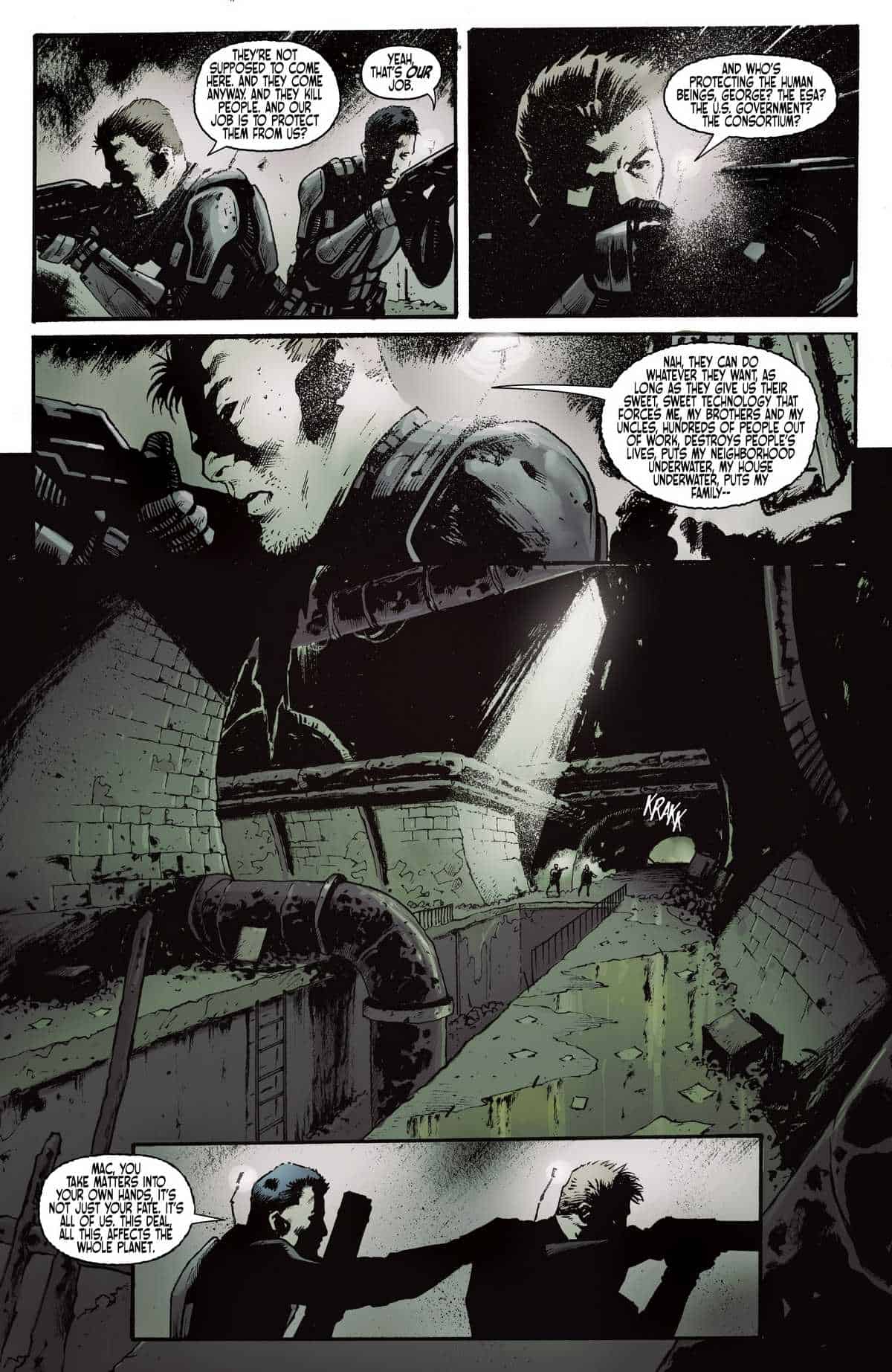 The alien quickly makes its escape and Mac rouses Rice to continue their pursuit. Climbing a ladder into a small town just outside the city, the two exit a hatch into the market. Following the screams of the civilians, the two make their way to the edge of town where they see the terrifying alien leaping down the edge of a cliff. Rice quickly notices that his badge is gone. Knowing they don’t just fall off, Mac suspects the alien may have grabbed it from his waist in the tunnels. They overlook the massive city ahead, knowing it’s the alien’s next destination when The Consortium’s shuttle suddenly enters the atmosphere. The coincidence of a never-seen-before alien sneaking into Earth unregistered on the day of the meeting between the ESA and The Consortium isn’t lost on Mac though. Rice agrees, but says they are probably going to need some backup…

As Earth continues to struggle with adapting to the presence of The Consortium’s Port in their ocean and the visitors it brings, the ESA finds themselves in a precarious position being recorded while two agents break protocol and pursue an unknown alien. While some of the characters in the series have yet to receive enough development to encourage any sort of attachment, the interplay of different organizations creates an emotional connection that contributes to the decisions of the individuals. This motivates the reader to consider the larger picture, and how individual decisions can have massive implications. I believe the interview with the ESA Director Tom Rutgers highlights this element. 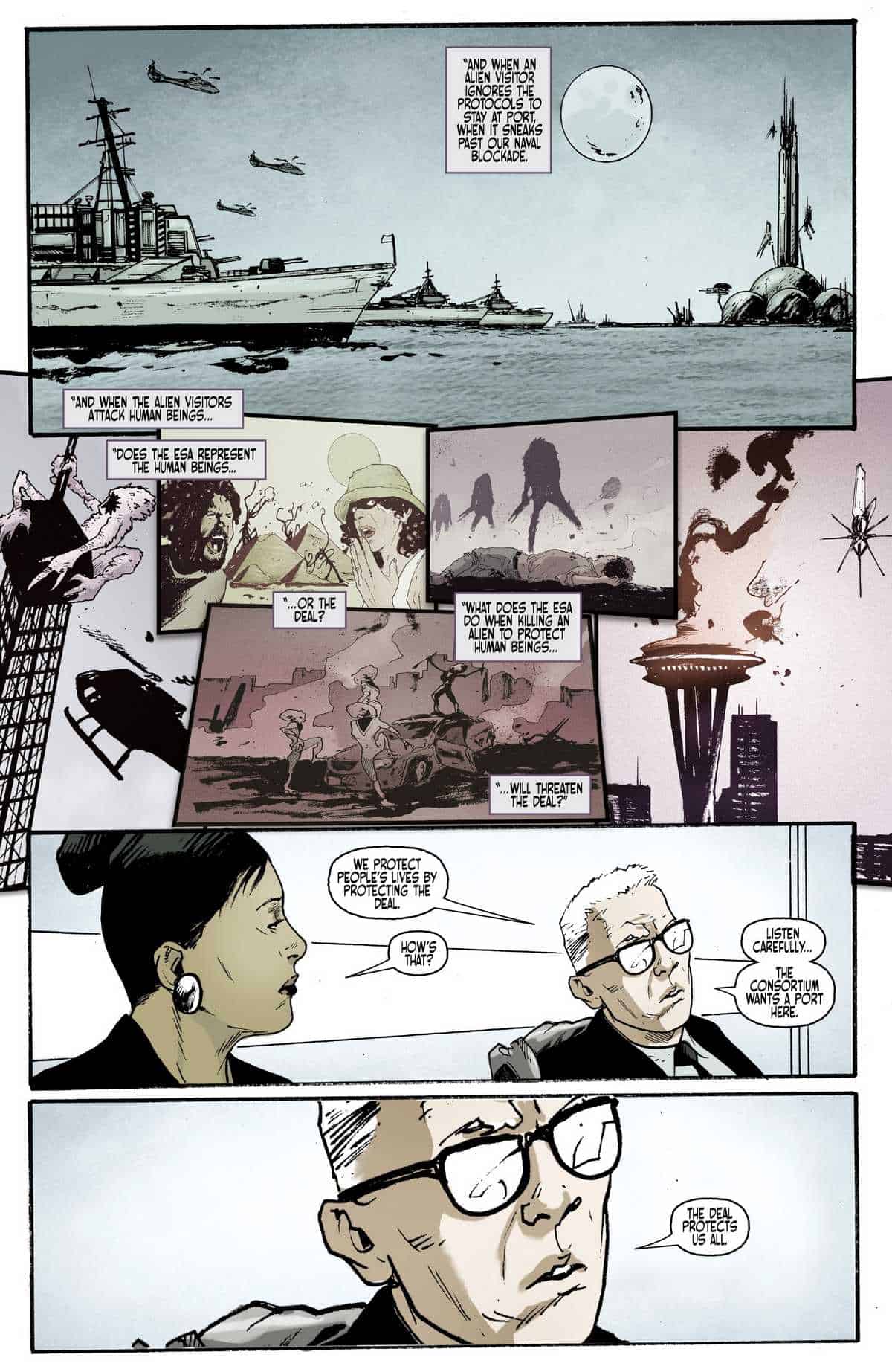 Writer Zack Kaplan continues an interesting twist on the concept of first contact, and with the help of artist Andrea Mutti, they successfully develop a believable world filled with intriguing individuals and organizations. The second entry in the series also continues to utilize The Consortium database pages that display the creative team’s world-building ability uniquely well. This time, The Consortium database pages of Species/Consortium.Members and Protocols/Engagement provide insight into the some of the story’s main characters as well as the world’s procedures and laws.

Port of Earth has also found a way to use this world to explore societal issues that are incredibly relevant to those of our own. Without delving into opinionated stances or clichés, the series captures not just the implications of the growing importance of globalization in business, but the struggles of society today in general. The creative team explores topics we all continue to debate today through a story of our first contact with alien visitors.

The story is at its strongest when it utilizes Earth’s Port and the organization’s that operate it, creating a realistic world with heart. However, as the plotline focuses on the individual agents in their pursuit after the alien, the narrative can begin to thin at times. While it is a fun “Good Cop, Bad Cop” pursuit, it fails to provide the depth found in the rest of the series, making it stand out as one of the weaker points. Throughout this issue, I couldn’t help but think their actions are just a prelude to something that is monumental and potentially threatening.

With the deal between The Consortium and Earth at the core of every decision, the second issue of Port of Earth delivers another intriguing read, well worth your purchase.

Final Thoughts: Port of Earth #2 continues to impress with world-building that compliments the magnificent sci-fi story grounded in society’s struggles today. Although lacking the necessary development to encourage reader’s attachment to individual characters, it continues to provide the framework for something truly unique and extraordinary. 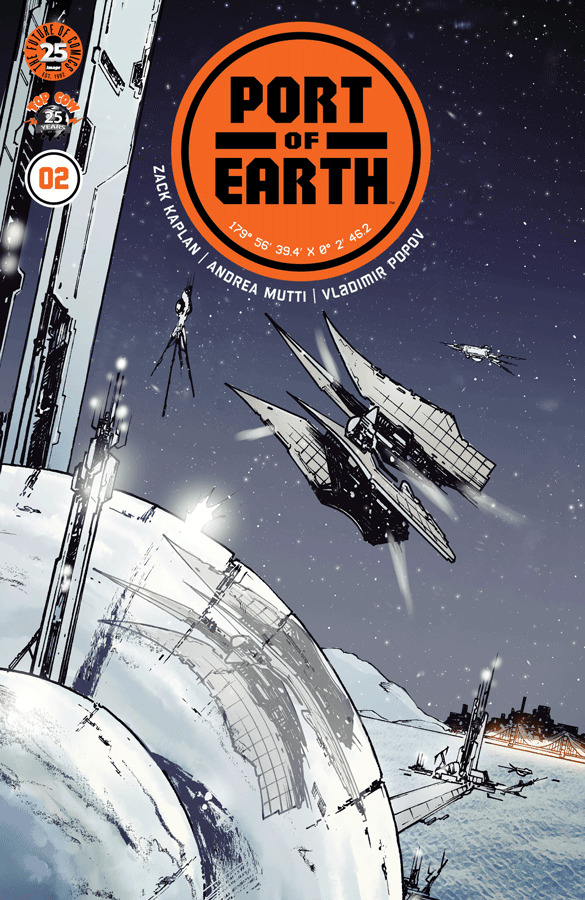