Possessive #1: Stuck in That Hell Hole of a House 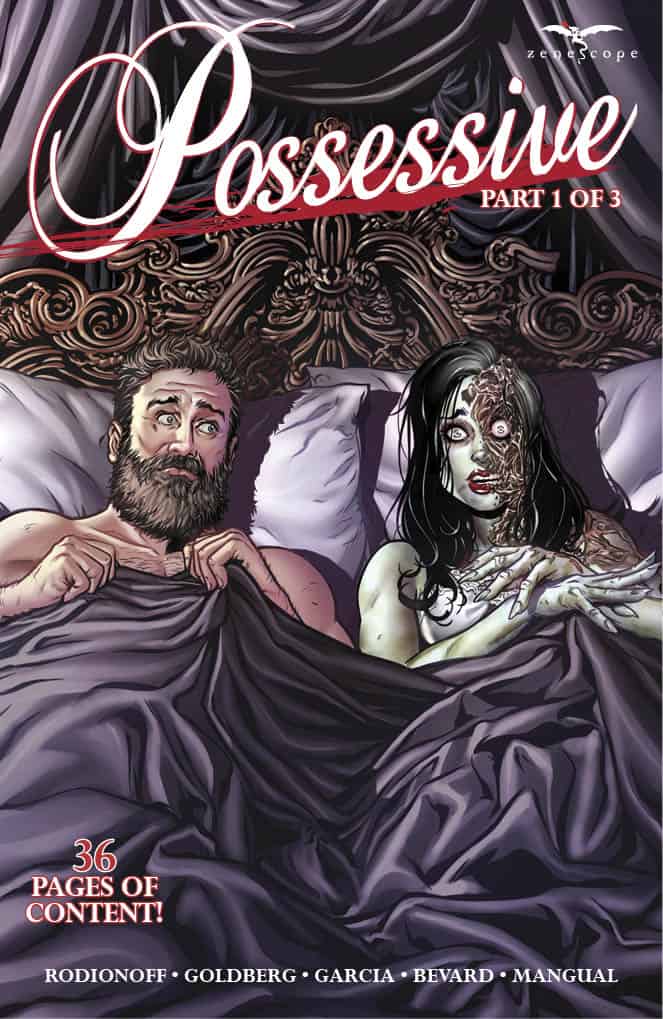 Let's not mince words. Todd's a loser. He has no job, no prospects, and almost no drive. With his wife ready to take the children and go, Todd buys the family their dream home.  Todd takes a chance on a house that needs much more upkeep than a few coats of paint and new carpet.  And little does Todd know, in the attic resides a terrifying and deadly spirit who does not do well with cohabitation.  But while this frightening specter may have murderous tendencies, she might just be what Todd needs to turn his life around.

Forgetting Sarah Marshall meets the Grudge, you know you're in for a hell of a ride! From the comedic and possibly unhinged minds of Adam F. Goldberg and Hans Rodionoff comes this off-beat love story that will warmly haunt the very depths of beating and non-beating hearts alike.

Horror and romance with a twist of comedy may not be the most widely used approach to storytelling, but it sure can deliver an entertaining story is utilized correctly. With Zenescope’s new Possessive series, we find a comic that truly couldn’t be described any better than off beat.

And that’s exactly why you can have so much fun with it. 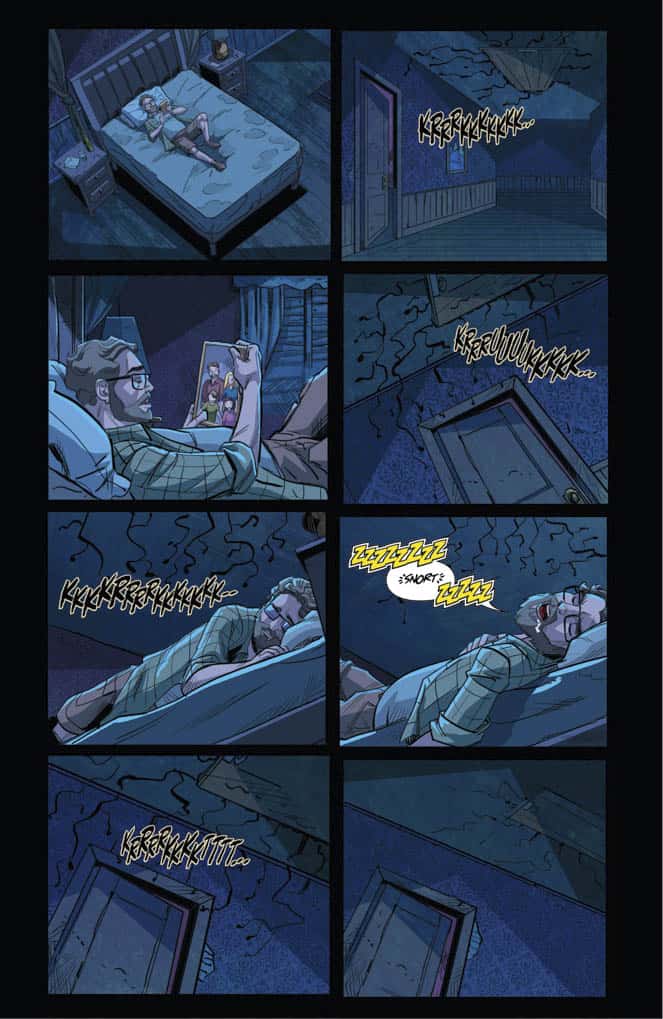 Possessive #1 kicks off by making true on the first issue’s description outlining the fact that the main character, Todd, is a real loser. He’s fallen prey to alcoholism and ruined the once charming family life he held and just can’t get himself together. He’s really quite an unlikable character and with most stories, it would be easy to put the book down just after meeting Todd. But when he unknowingly buys a haunted house to try and fix his life, only making things exponentially worse, we see a new relationship begin to take shape with him at his lowest point. The only problem is that relationship is with the murderous ghost who is haunting the house.

The story moves at a rapid pace and with such a rough characterization to root the narrative in, that works in the first issue’s favor. The main problem is we don’t really get to the actual relationship being formed soon enough. But even then, I believe there is a meet cute buried somewhere in these pages that you won’t forget anytime soon, and it’s a great example of the type of weirdness that this comic brings to the table. It doesn’t take itself too seriously and the creative team seems quite aware of the unique angle they are utilizing in bringing together a haunted house with a love story, so everything just works even when you think it absolutely shouldn’t.

Todd isn’t a character you can necessarily get behind, but maybe that’s what brings an odd charm to the spectral romance at play, because a horrifying ghost with a penchant for killing isn’t exactly your typical love interest. Two stereotypical characters who are typically reduced to cliches find themselves at the center of this story and, somehow, a sense of originality shines through. If you can get over the general horribleness of Todd and the evil nature of the haunted spirit, there might be something worthwhile here. But I certainly wouldn’t fault you if you couldn’t.

There are issues that readers might take that will give them a different impression, primarily in the lack of a lead character who feels like they are doing the right thing other than the now ex-wife, who is reduced to a side character. There is a thoughtful metaphor in the wordplay of possessive and the social prominence it has had within an abusive relationship but the issue doesn’t really delve deep into that meaning. Instead it takes the abusive partner and pulls him away from those he is abusing to pair him with someone who is demonstrably worse than him, in effect “giving him what he deserves”. A pair of unlikely, unlikable partners. But in doing so it relegates the weight of those actions away in comedic outbursts. There is potential do something greater than just pure entertainment with this story, but I’m not quite sure yet if that is what we will be getting, and that’s quite OK, but still worth mentioning.

The artwork from Garcia and Bevard feels like it leans into the comedy side a bit more which helps some of the particularly off-beat moments work a little better. Aside from a couple of gruesome moments, the visuals don’t really provide anything spectacular despite there being some great opportunities. It’s a bit flat in its presentation and we lose some of the momentum the narrative builds because of it. Carlos M. Mangual brings some strong lettering to this issue with some interesting design choices as well. The flow and pacing of how we move through the pages captures the rapid narrative movements but still gives room for the comedy to breathe.

Overall, it’s a strange mixture of a uniquely odd idea that works pretty good in its execution to give readers a book that is memorable to say the least. Will a book about a quoted “loser” and a murdering ghost potentially falling into a love story be for everyone? Absolutely not. But if that premise is enough to pull you in you are likely to find some worthy entertainment in the pages of Possessive #1.

Possessive #1 takes a strange and unique premise to give readers a book that is definitely memorable to say the least. It's the start of a surprising haunted romance that is oddly charming and unquestionably entertaining.

Possessive #1: Stuck in That Hell Hole of a House