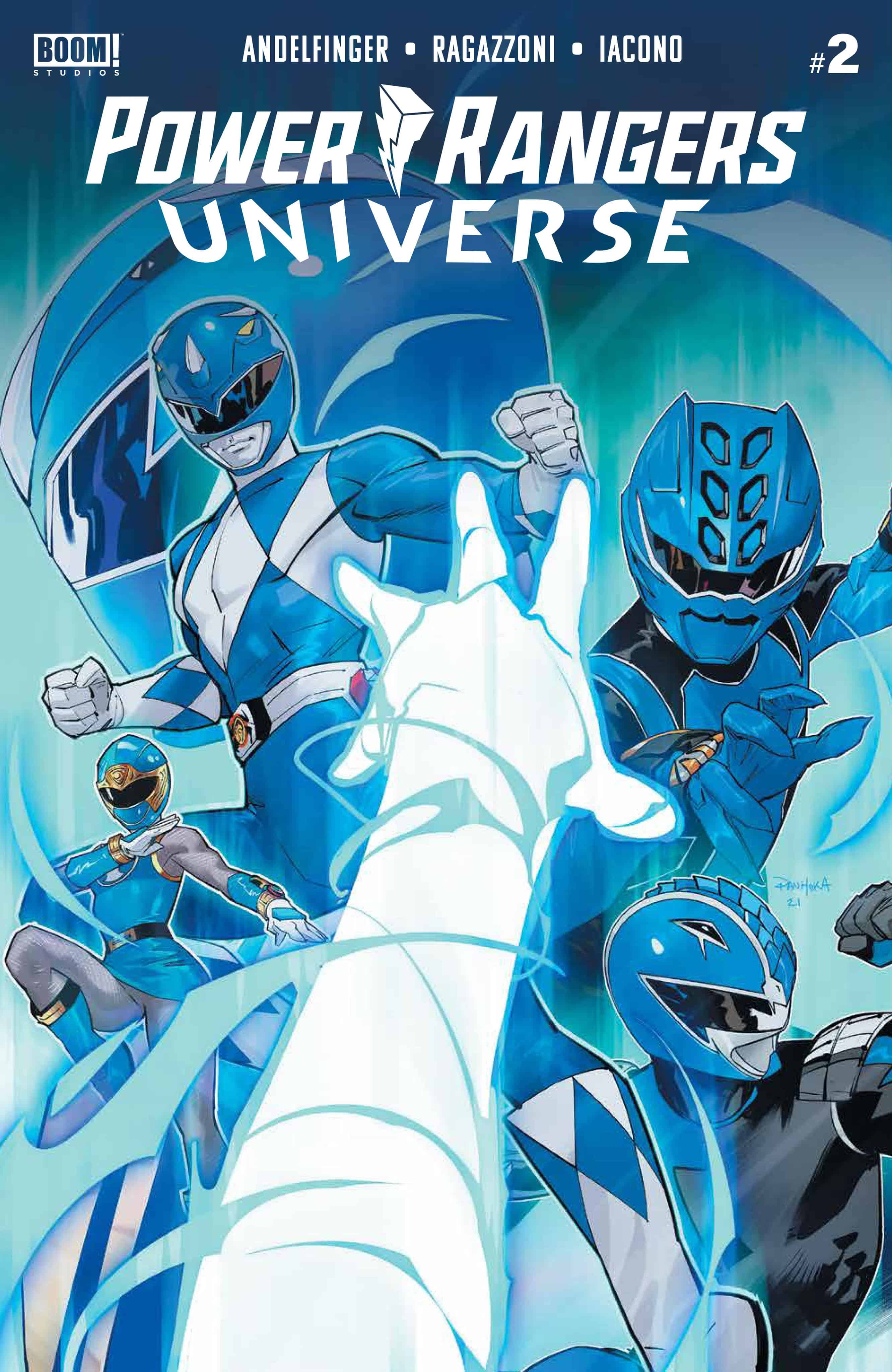 Discover the truth behind the Phantom Ranger, the Morphin Masters, Power Rangers, and the Morphin Grid itself in the series that will unlock the secrets of the Power Rangers Universe! In the ancient past, six teens scramble inside the Masterforge to save a mysterious figure they rescue from the Morphin Grid. But in doing so, they strand themselves from their parents, the Morphin Masters, who ascend into the Grid itself to protect it from Dark Specter. Can they protect Earth and the Grid itself from the impending forces headed their way? That question will have to wait, because first they must defend themselves against... a T-Rex attack!

Well, I still can’t remember any of the new character’s names, but I did like this second issue slightly more than the first. There’s a LOT going on in this mini-series while at the same time feeling like we’re not getting to the premise fast enough. The Phantom Ranger is barely a blip in the story so far, though he’s at least conscious for this issue.

I don’t want to be too harsh, however, as I am still enjoying the ride. We get a pretty fun fight with a corrupted T-Rex. There’s also more development on the Dark Specter angle (probably my favorite part of this mini). He’s searching for a way to destroy the Morphin Grid and while we know he won’t get it, it’s enjoyable seeing this classic villain and his motivations explored. The Morphin Grid is a concept I don’t fully understand. Often when the grid is brought up, I smile and nod and pretend I know what’s going on. Yeah, I’m one of those. I know that the Morphin Grid is the source of the Power Rangers’ powers and that Zordon is tied to it. I’m not sure the concept needs to be overly complicated like it seems to be in the BOOM! comics, but I’ll keep smiling and nodding until I see a copy of “Power Rangers for Dummies” at the bookstore.

There’s a very big moment that happens at the end that I wish happened last issue: the teens become Power Rangers. And not just any Power Rangers. When they first morph, they appear in classic Power Rangers costumes from the TV series. One of them is the Mighty Morphin Red Ranger, one is the Blue Zeo Ranger, one is the Pink Time Force Ranger, etc. Like I’ve said before, I’ve only seen up to Power Rangers In Space (though I’m slowly working my way through Lightspeed Rescue, which is actually quite fun – Trakeena is fierce), but after playing Battle for the Grid and Heroes of the Grid, as well as educating myself with various YouTube channels devoted to the franchise, I think I have a broad enough knowledge of the shows to at least recognize some of the suits. Longtime fans, however, will likely be thrilled to see a bunch of seasons represented.

The issue has a lot of character-driven moments that would really be more impactful had I known the characters prior to this. After two issues, I know none of the character’s names. I have no idea who is in what costume. It’s difficult because the characters all have nice designs, but I just can’t f or the life of me stick a name to a face with this lot. I’m hoping that’ll change in the next few issues where we can see more development of these teens, but at the same time I’m itching for more Phantom Ranger.

The art is nice, but I did find myself confused at various points and left wondering, “What just happened?” The characters are all very expressive and stylized in a fun way, but I do wish the action was easier to follow. I’m also gutted that the Psycho Rangers variants ended with #1’s Psycho Red. None of the Power Rangers comics have ever had a major dud in terms of cover art, but the last issue’s Psycho Red variant blew me away. For this issue, I’m very fond of Raul Allen’s trippy, retro 90’s Mighty Morphin variant. The main covers by the always-fantastic Dan Mora have been a real highlight of this mini-series, too. I’m always a fan when we see a bunch of different Rangers of the same color on the art together.

The action is certainly picking up in Power Rangers Universe #2, but I still find myself a bit lost. Longtime Power Rangers fans can surely pick up pieces of lore that I cannot, but I'm still invested in learning more about the Phantom Ranger as well as Dark Specter.