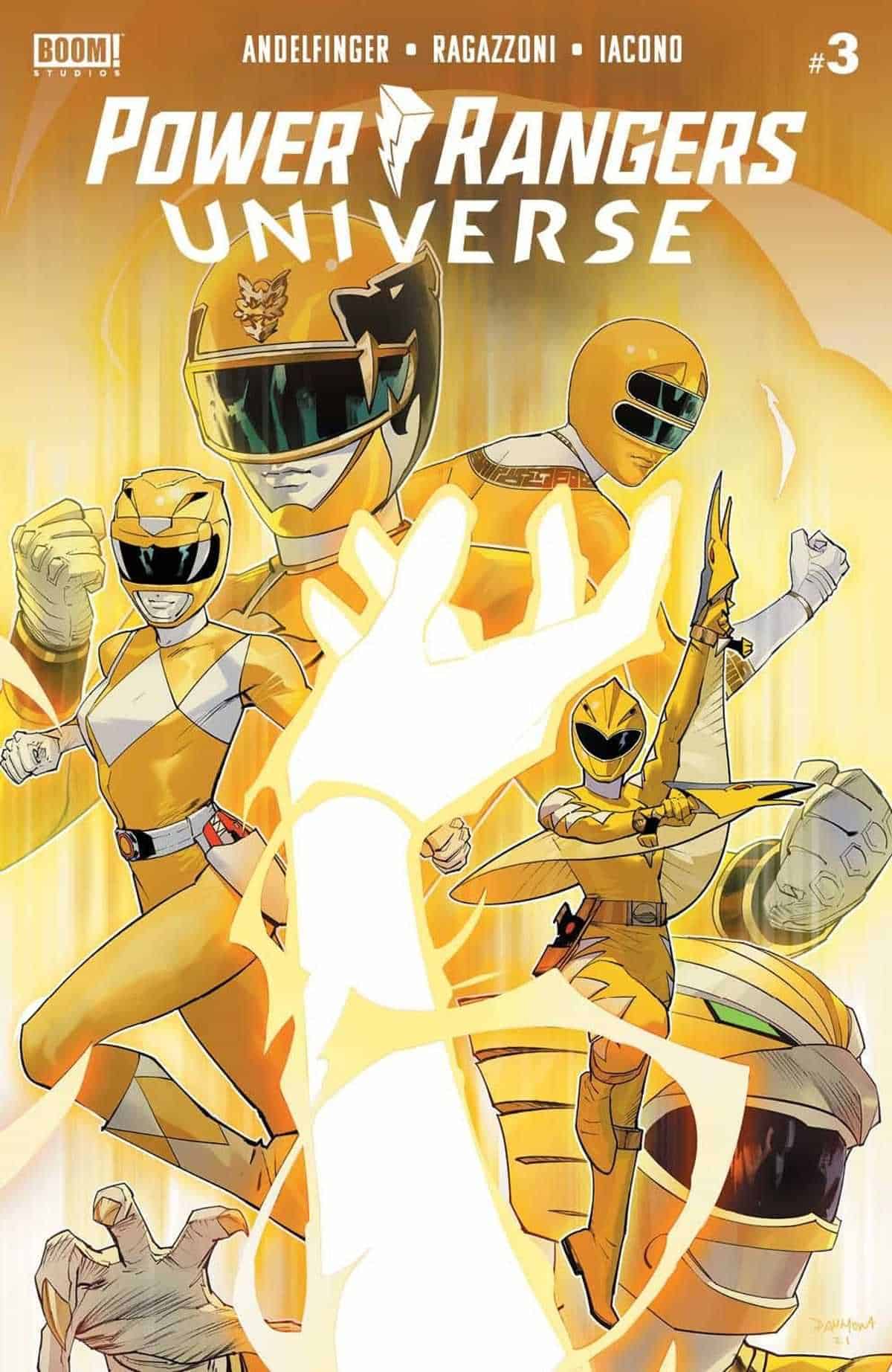 A mysterious pod crashes on Earth, but the Legendary Ranger Teens are on the scene to confront whatever dangers it brings from space. While their legendary ranger forms have never made them feel so powerful against the hoard spilling out from the pod, what happens when their powers begin to fail...and even hurt them?

I was thrilled to see the cover this month focusing on the underappreciated Yellow Rangers of the Power Rangers series. Dan Mora delivers once again, and while I’ve always been a Mighty Morphin’ Pink Ranger stan, over the years I’ve developed a strong fondness for the Yellow Rangers. Tanya is my personal favorite, and seeing her iconic Zeo Ranger look included with such prominence made my day.

Inside the comic, we get more of the teens of Planet 0117, A47 Galaxy. As we saw last issue, they’re empowered by the Morphin Grid and have the abilities of specific Power Rangers from across the series. As a lover of the Zeo Rangers, I really dug seeing a female Blue Zeo Ranger kicking butt. I’m not sure if there’s ever been a female Blue Ranger, but there should be. And while I haven’t yet seen Time Force, I’ve always loved Jen Scotts’ amazing Pink Ranger costume. We also get a female-presenting Mighty Morphin Red Ranger, a suit which is easily the face of the Power Rangers franchise (though obviously Tommy’s Green Ranger is the most popular).

We get some good action this issue which was appreciated. There’s a level of creepiness with Dark Specter’s forces that I really dig. We also see the new Power Rangers take on other forms, such as the Mighty Morphin Pink Ranger and the Turbo Blue Ranger. There was a Rocky joke with the Turbo Blue Ranger that I thought was really amusing until I remembered the wretched fate Rocky suffered in Turbo leading to his replacement with the child Justin. And then I just felt sad.

But between the cool action scenes where you get to see all these different Ranger suits, there’s talking. A lot of talking. With characters I still have no connection to. I feel for writer Nicole Andelfinger because 6 issues isn’t a lot of time to develop a cast of six new characters. These aren’t a dozen 30 minute episodes we’re talking about where each character can shine. But Andelfinger gives a lot of page-time to these teens, precious page-time that could be spread more evenly out to the Phantom Ranger and Dark Specter. There’s a brief moment where Phantom Ranger almost reveals his name to the team when the new Pink Ranger says instead, “Less talking, more running!” It was simultaneously funny and frustrating to me and after stewing on it for a bit, I’m still undecided.

As for Dark Specter, the big baddie still hasn’t made much of an impression in the three issues. He has a henchman who seems to be a character we are supposed to know, but I’m personally not aware of him. This would’ve been a great opportunity to throw other ancient villains into the mix for longtime Power Rangers fans, or even have a few classic monsters working for Dark Specter like the Knasty Knight or Madame Woe. That would’ve been far more exciting to me than a bunch of Dark Specter-putties and a character I don’t recognize. (Watch the villain be someone important in a later season that I haven’t seen. I hope so, I’m ready to be read for filth over this.)

Power Rangers Universe #3 picks up on the action and the familiar Power Rangers costumes, but it still suffers the problem of focusing on a bland teenage cast of characters who talk a lot about very little. The Phantom Ranger continues to feel like a glorified cameo character instead of the main premise of the mini-series. I'm not trying to be too harsh, however, as there's a lot of fun action to see in this issue, and seeing the different suits used is a great highlight. And oh, that cover... truly gorgeous.