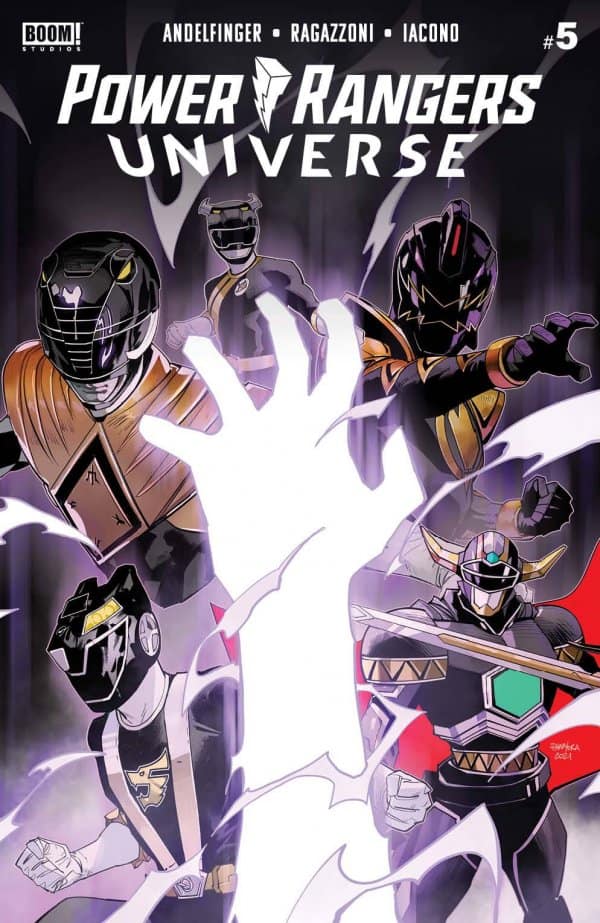 On the Masterforge, the Legendary Ranger Teens and the Morphinaut feel the aftershock of the smoking crater on Earth's surface. At the mysterious crash site, their new powers and skill sets are put to the test against a horde of Foot Soldiers! But what happens when their powers start to fail... and even begin to turn against them?

The threat of Dark Specter looms over the heroes, and as we’ve seen from this issue, his corruption has no limits. In fact, his “righthand man” that we’ve seen earlier was none other than Chendil. If you’re scratching your head and asking aloud “who?” then you’re in my boat. I immediately had to Google the name only to realize it was the blond kid from the first issue. It’s been several months since I’ve read that issue, but I never got the impression that that Phantom Ranger was overly close to the character. Here, we see him refer to Chendil as his “partner”, and there’s an emotional scene involving the two. Unfortunately, it didn’t arouse any sort of emotion from me other than confusion at who the character was. It’s the problem of having such a large cast of characters… I forgot Chendil even existed so there was no impact for his ultimate fate.

With only one issue left, I’d be lying if I said I wasn’t concerned that we aren’t going to get a gratifying conclusion. There’s some really fun action in this issue, but I feel that some of the attempts at character development in earlier issues should have been cut to allow for this team of Rangers to gain their own powers sooner.

There’s also the matter of Dark Specter corrupting the new Rangers. This is a fantastic idea that bolsters Dark Specter as a Power Rangers villain. If there had been more of that and more of him throughout the first four issues, this would have been a stronger addition into the canon. There’s a cliffhanger for the issue that has my interest slightly piqued, but we also still don’t know the Phantom Ranger’s identity. There’s a lot to wrap up in the final issue, and my fingers are crossed that Andelfinger pumps out a great ending. But as a longtime fan, I was hoping for more connection to the Power Rangers universe.

Power Rangers Universe #5 introduces some great concepts and brief action sequences, and Dark Specter is freakin' cool. But a lackluster revelation and the dragging out of the Phantom Ranger's identity is frustrating. If you're like me and not invested in this new group of Power Rangers, you'll likely feel the same. But there's only one issue left, so I'm cautiously hopeful that this creative team will find a way to wrap the story up in a cohesive and fulfilling manner.