Power Rangers Vol 1: What Have We Done? 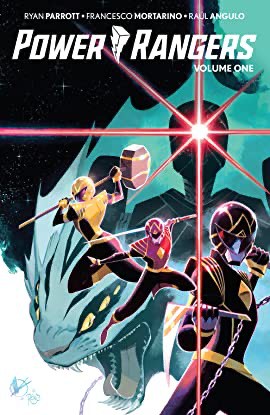 A NEW ERA BEGINS HERE WITH A NEW TEAM -AND ONLY LORD DRAKKON CAN SAVE THEM!

Only the original Power Rangers, now known as the Omega Rangers - Jason, Trini and Zack - can hope to defeat a new cosmic threat, but their secret weapon is... the villainous Lord Drakkon?! Zordon forbids the new Power Rangers team from contacting Drakkon, so if they want to save the universe then they’ll have to go rogue - and go up against their Mighty Morphin allies. But will Drakkon be their ally...or the one who dooms them all?

The Omega Rangers have gone rogue. This is a surprising concept for me in Ranger lore. The Rangers plan and execute the perfect deception on Zordon, their long time mentor,  and even give Alpha 5 a blow. The reason? To obtain the help of their murderous nemesis Lord Drakkon to stop the Empyreal, and sure they try to ask to get help from their friends but they understandably get turned down. And it all works to set up the Omega Rangers as the block ops team in the Power Rangers Mythos.

I enjoyed the science fiction space elements in this story. The use of space vampires was unexpected and very welcome; instead of one beast or legions of mindless putties, this was a difference.  The vampires were given a tragic backstory in addition to depth and intelligence, feeling like complex villains, and despite the fact that Drakkon easily manipulated the leader to drop his guard and then be stabbed in the back.

The art in this trade I actually believe is better than in the individual issues. I originally read this story in the floppies and the characters had strange lines across their face, and here those lines here are dropped, feeling cohesive and working towards the whole. Similarly, I like the use of shading in this edition, especially in the Command Center scenes. It really looks like the lighting is dimmed and the shading helps show that and at the same time does not diminish the bright colors associated with Power Rangers.

Back to the Black Ops idea, the colors used for the Omega Ranger costumes are colorful but they do appear to be slightly muted, that could be due to the use of the grays in their uniforms. There is not any white, just the primary color, gold accents and the grays in the arms and legs, all working towards a good look for a dark ops team in the Power Rangers mythos.

I am glad to see the use of the Omega Rangers in this way, as it helps expand the lore with the addition of an experienced black ops team.  Too often we see newbies given the power but using the “Peace Conference Trio” in this way helps add to the myth and create a great in canon reason for the three original actors to leave the team. Overall, a good story decision strongly backed up by its art.

Power Rangers Vol 1, What Have We Done?