Predator #1: Try Not To Crash 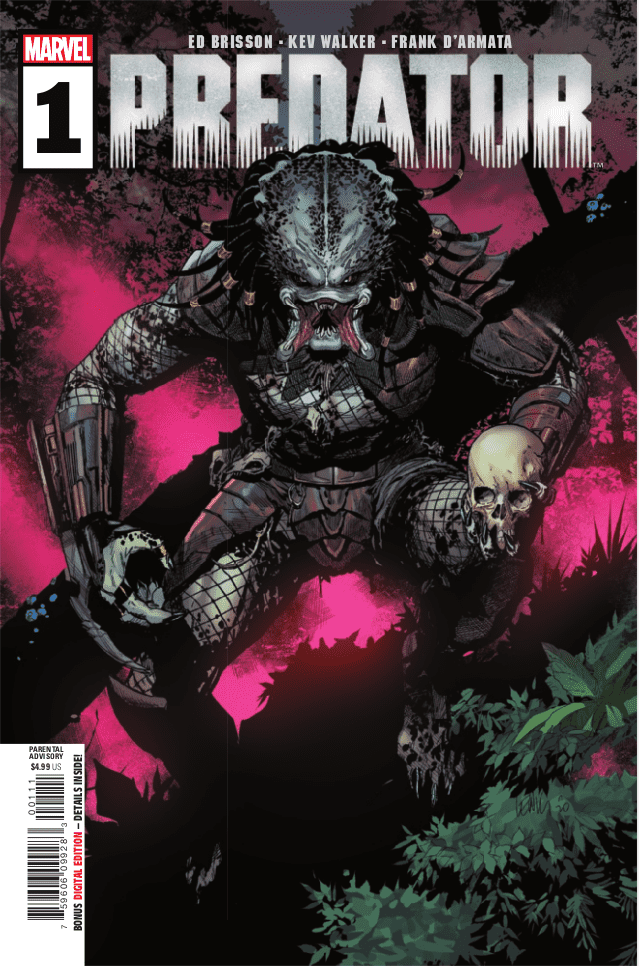 The year is 2056 Humanity is capable of interstellar travel. Though humans have made advancements in technology, they are still vulnerable prey. Proof if proof were needed is the plight of Theta Berwick, the sole survivor of a settlement that fell foul of a Predator on the planet Damara. Fifteen years pass and somehow she has managed to not only escape the fate of her parents and other members of their settlement, but also acquired control of Predator weaponry and travel logs and has one specific Predator in her sights. The one that destroyed her family. However, she has yet to find him. And to make matters worse her equipment is failing her, causing her to seek help from people who want to arrest her for stealing property of Astar, her parents former employers. Namely her ship the Sandpiper. Presumably ‘a rather expensive piece of hardware’. And her only means of exacting her revenge. 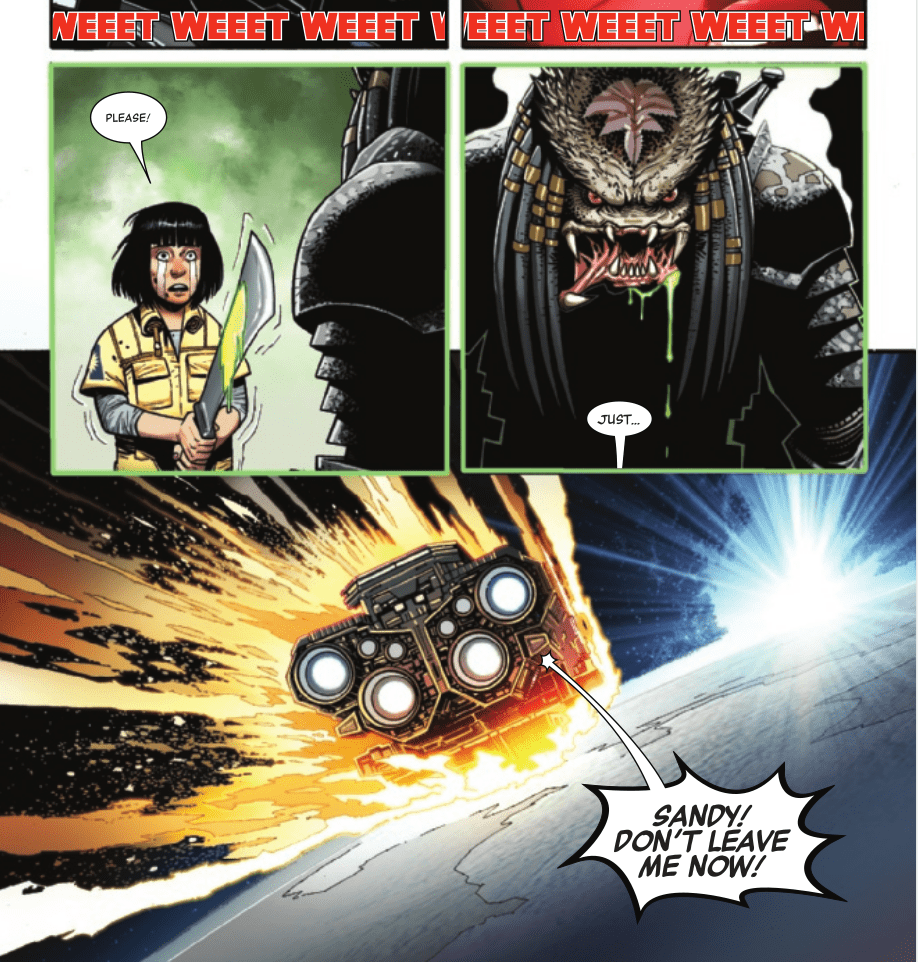 This is Marvels second sci-fi/horror acquisition from 20th Century Fox, having recently also adapted Aliens into its archives. As such it has a big job ahead of it, especially in light of recent events and the success of the new ‘Preyquel’. And having laid out the events in prologue of all of the previous Predator films it has set its stall out and made it clear that they intend to forge on with the continuation of the movie franchise, with this as canon to its entries. The prologue also decidedly states that in all cases the Predator was defeated and killed, with casualties. With the notable exception of the 2010 movie. In this case alone it simply states “They come to learn they are being hunted for sport and that the planet is a game reserve.” So already Ed Brisson makes no bones about the fact we are to believe there is always a chance of survival. And as we enter the world of the adult Theta I’m definitely finding it believable  in terms of this character. In a fifteen year gap she has become a skilled hunter herself and is out for the blood of the Predator “what done her wrong”. 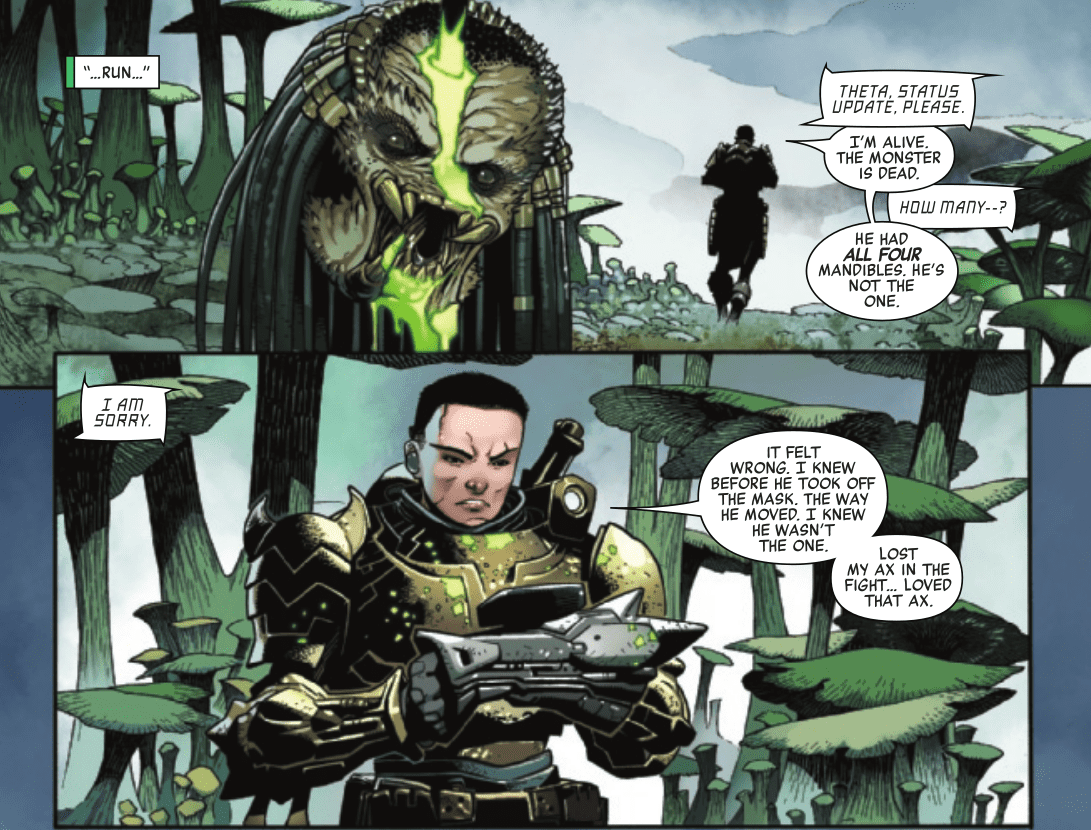 At first I was overly concerning myself with questions of how we got to this stage. But Ed skilfully managed to make me forget that, with throwaway comments about how she seems to know her quarry by the way he moves alone..intrigued!!! And this slightly impresses me and I believe I will find the journey an interesting one. It will be a hard won victory, especially as what follows is a set of dilemmas that show she has more to contend with than a bunch of hunters with mandibles. Low on rations and facing system failure and problems with her gravitational stabilizers, her only solution is a trip to Medway that may see her lose her freedom. And last but not least facing off against confrontational inhabitants that fail to realise she’s on their side. No surprise really given her garb! 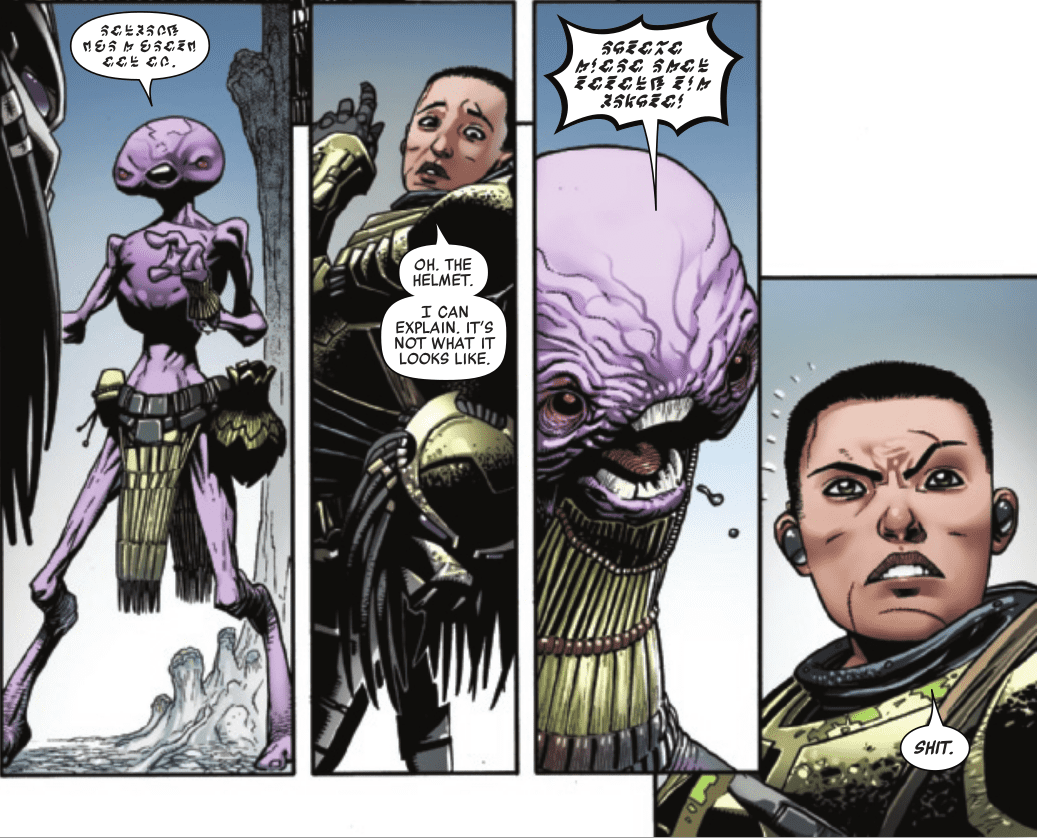 In this slightly awkward interaction alone Ed has managed to ensure he has avoided comparisons to Ripley, also characterising her the way he has with a mission of vengeance, rather than one of dread and a need to end a personal nightmare. I’m also warming to Sandy the AI. As it argues with Theta about their options it clearly has some sass. And this is vital, being as it is the only other dramatis personae with anything to impart not in flashback. Then as they discuss logistics and she requests a path to Medway, it says it already has without skipping a beat. I wonder is it simply anticipating her needs, or playing Nostromo style ‘Mother’??? Which reminds me that the origin story here is quite similar to that of Newt’s Tale so many years ago. But thankfully this outing has already taken a stark departure from the ‘child in peril’ narrative as seen in that volume. And instead we see Theta has grown to be capable, decisive and more than willing to throw herself into peril to complete her life’s mission. I also like how it’s plausibly explained how she can track their hunting patterns. And that the habits of the Predator are explored in depth. The mention of change in hunting route is a good indication Ed has a firm grasp on not only his heroine, but also how these iconic antagonists became the apex hunters they are famed for in movie lore. 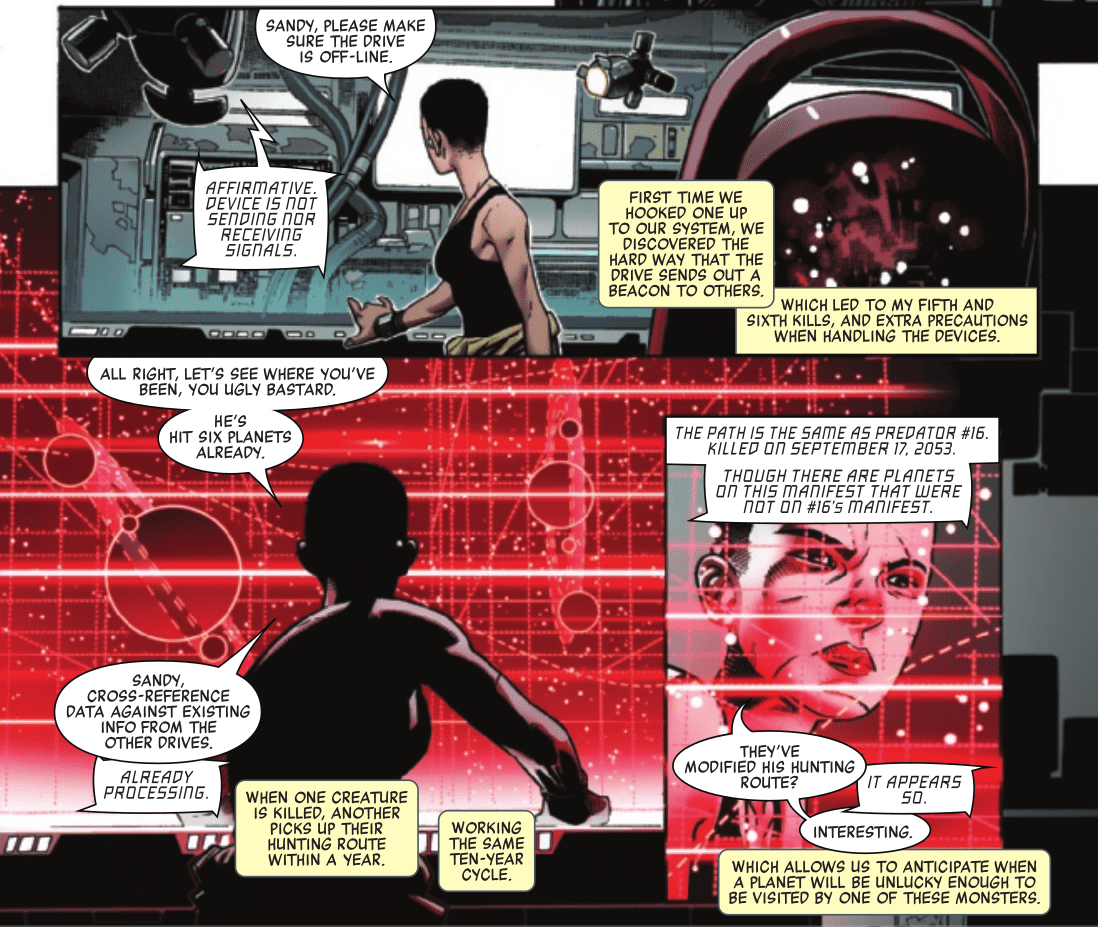 In terms of writing the switch between present dilemma and dramatic flashback is also well paced. And I was satisfied enough only seeing the Predator so far in flashback, save for the opening scene that set the stage. Each fade back and forth is not just relatable but also links in, either thematically or in terms of dialogue. A great tool in making sure the transition from one to the other isn’t too jarring. And Kev Walker sets the stage well with the confrontation with the indigenous population Theta has a misunderstanding with. And Frank D’Armata is a great match in terms of the coloring and shading each scene, giving the right amount of depth to the features and background. Nothing of the scenery overshadows the action and your eye is drawn to the point of reference at all times. And who can leave out the epic sound effects, I assume provided by Clayton Cowles. Whether it be he or Kev I definitely felt that KABOOOOOM. And kudos to Marvel themselves for not scrimping on the violence and cursing. Swear words and bloody head shots abound reassured me this is no censored affair and they aren’t going to spare the bloody special effects in favor of a toothless tale, with a lead character clearly aiming to make her mark. 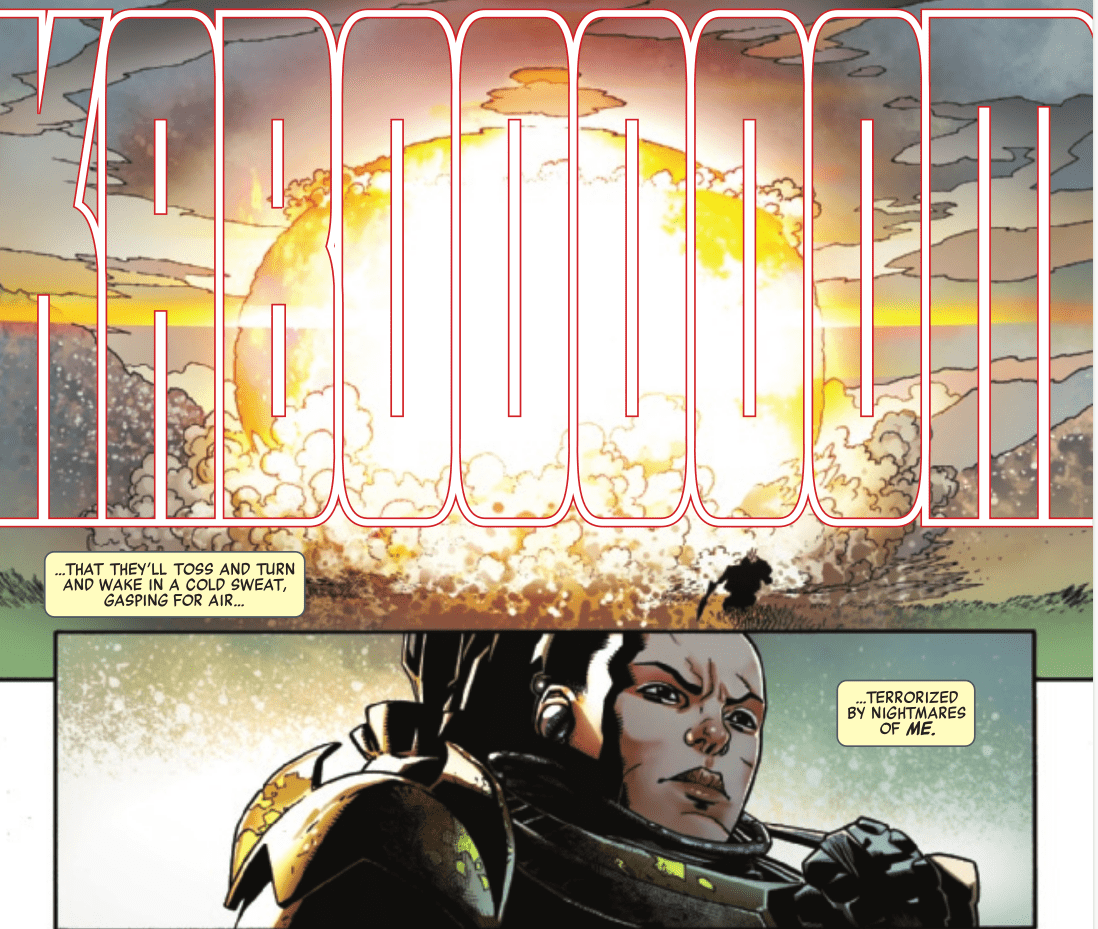 And finally the cover by Leinil Francis Yu & Sunny Gho, showcasing the big guy himself is as worthy and memorable as those big screen images, let alone the older Dark Horse entries of the 90’s. And check out this link to a sneak peak by Chad Burdette, which includes a breakdown of all the variant covers, some of my personal favorites being by Peach Momoko and Rahzzah below. 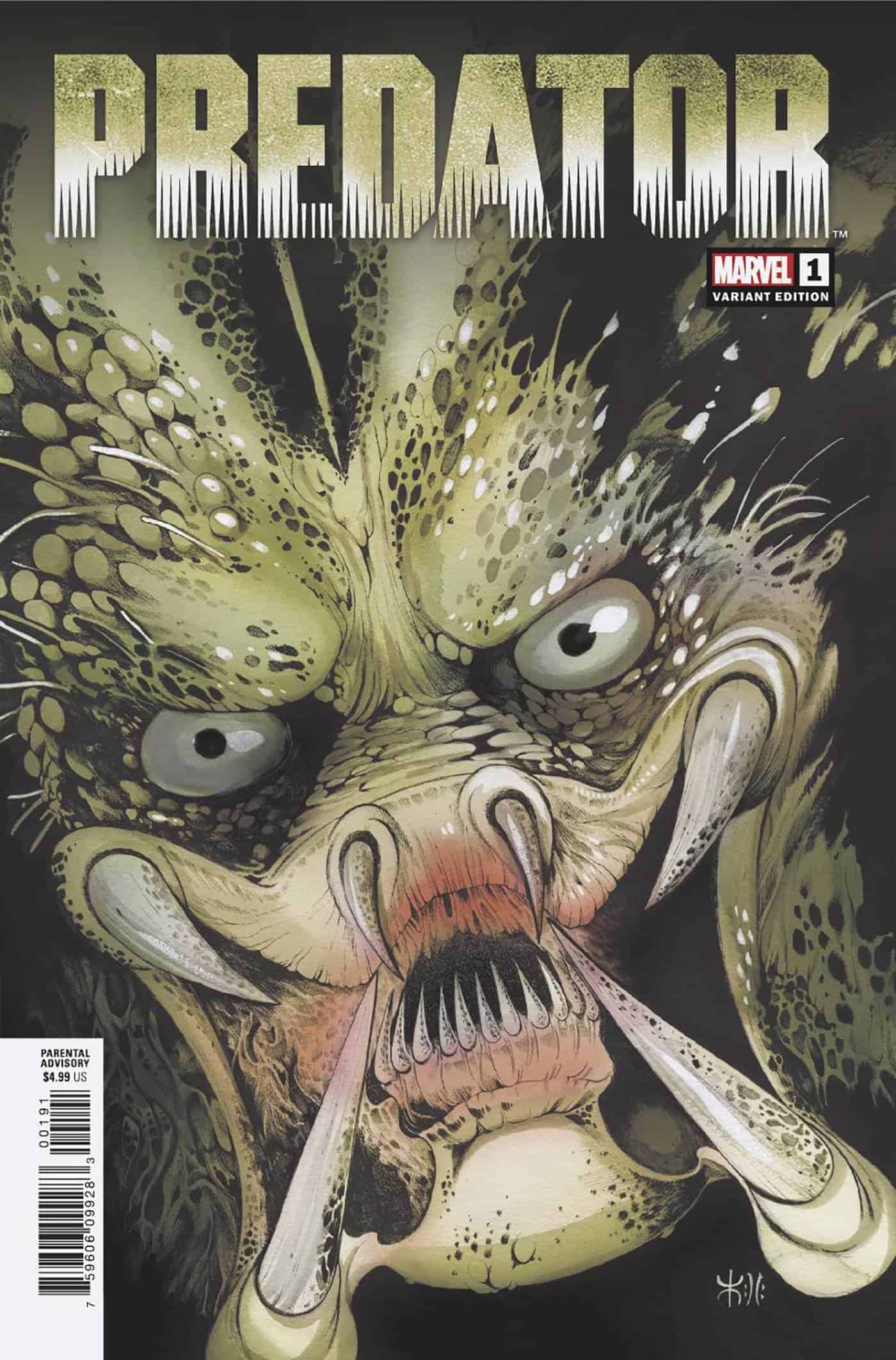 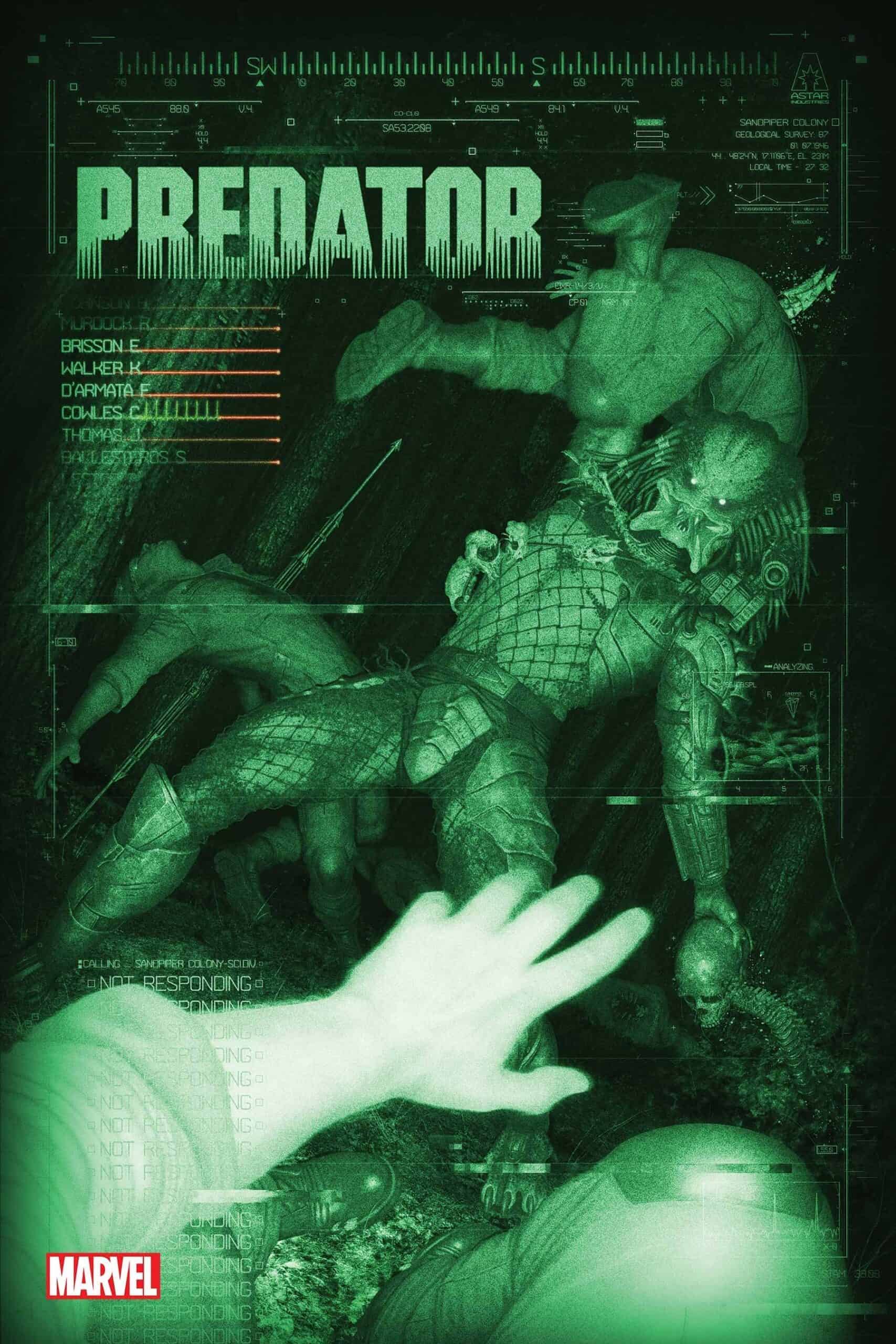 A worthy entry into Predator lore, this story is defining itself as being the rightful heir to the yarns that have gone before it and giving us a relatable and believable protagonist. It just needs to keep the pace up in the next five instalments.

Predator #1 Try Not To Crash