PRIMORDIAL #6: There are no endings… 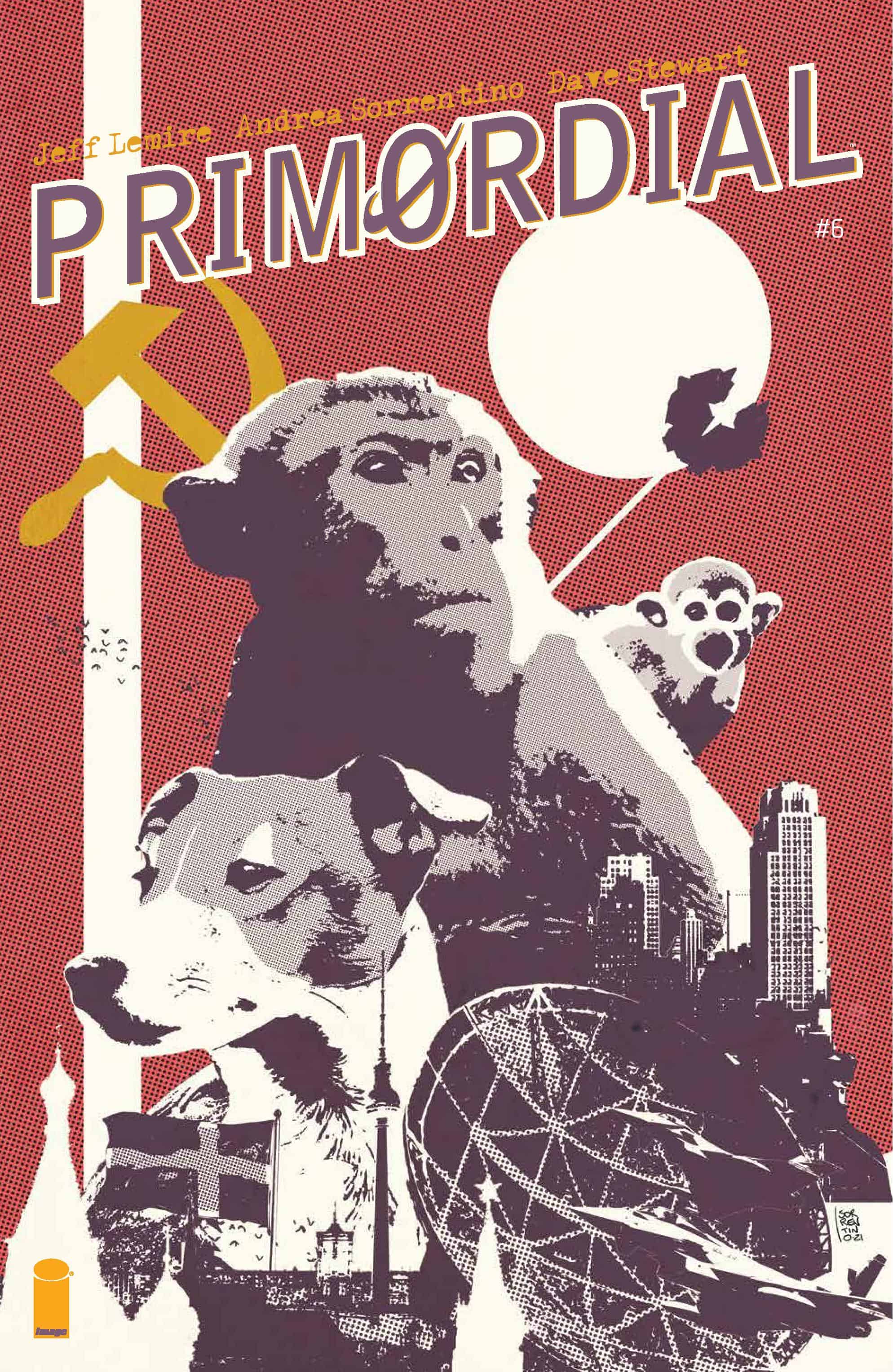 Our intrepid astronauts have made it back after their long journey but will man's destructive nature prove their undoing despite the efforts of a brave few to bring them home or perhaps is their return humanity's undoing?

This series concludes with this issue but perhaps that’s the wrong choice of word… in some profound words from the alien intelligence in the series: “Nothing ends…Change…There is…only change.

Lemire takes the time to fill in the blanks from the cold war era story as we get to witness Donald’s final moments and a promise fulfilled. I’m reminded of some of the best sci-fi short stories and Twilight zone episodes, We are presented with an ending but not an explanation of that ending, rather Lemire leaves it to you to interpret… Are Able, Mrs. Baker, and Laika the harbingers of humanity’s final moments bringing an alien power to bare on a species whose love of war and power makes them not worthy of continued existence leading said alien intelligence to unleash its power on us and begins to absorb the entire planet through its vastly superior technology? Or are they the bringers of the next stage in our existence where man and animal are united and brought together on a higher level of understanding through the change made to the 3 animals who have been evolved by the alien/ higher intelligence and the last page that could very much be read as the end of things as we know it, is really the birth of something new through change, the only real constant in this or any other
universe? The beauty of this story is that it’s presented in such a way that all of those answers could be right or wrong. Regardless of that interpretation what Lemire has presented us here is a mirror, held up to our faces to show humanity in all its beauty and ugliness through the purity of three innocent animals who really remind us that even though we may consider ourselves the stewards of less intelligent life on this spinning rock in the vastness of
space, we could learn a great deal from the simple purity of that life. The goodness of who we are is beautifully illustrated through the efforts of a few brave individuals who would not abandon those animals to the mysteries in the cold light of the uncaring stars. Humanity considers itself the captain of its own fate…this story reminds us that perhaps we are not. 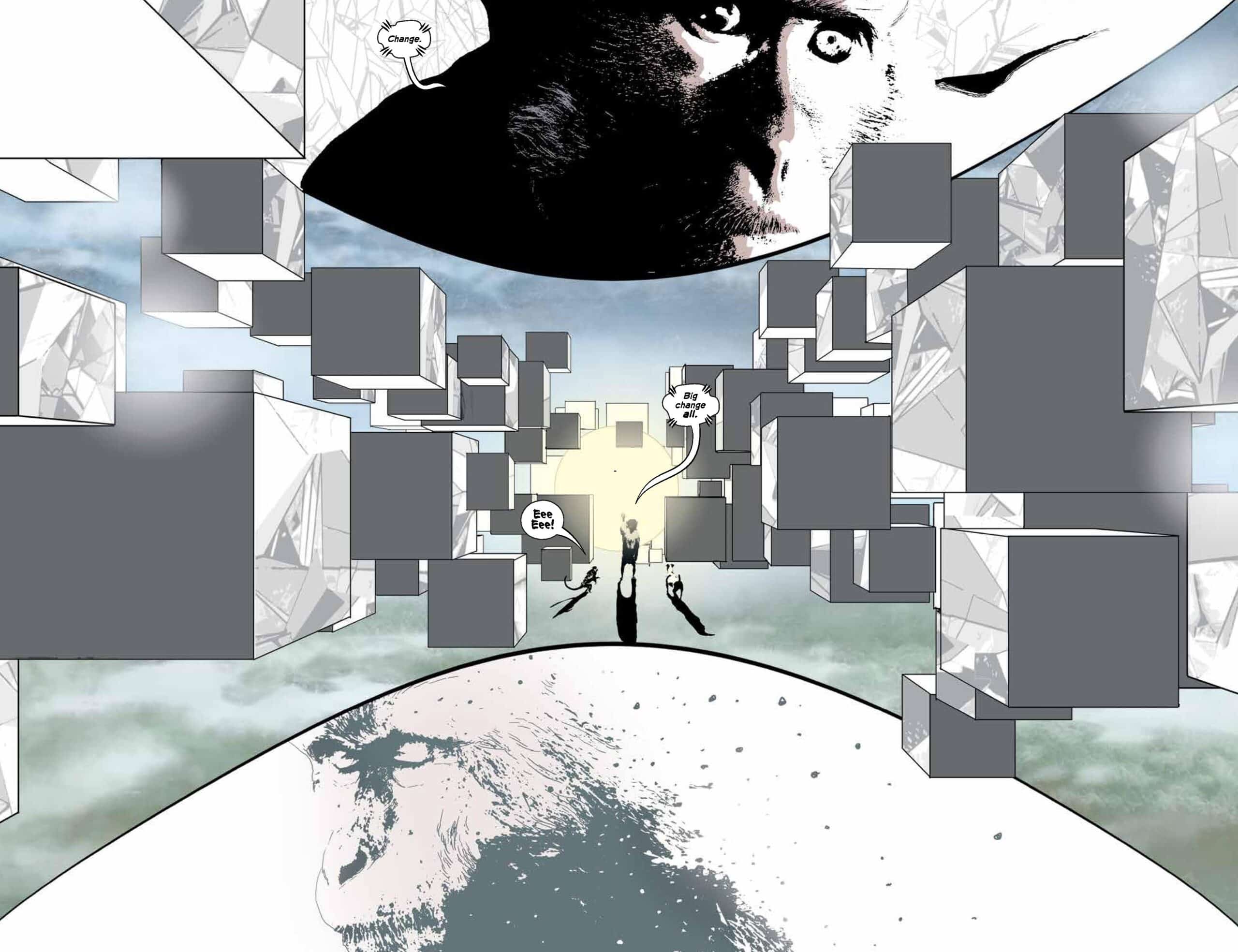 Andrea Sorrentino again manages to take Lemire’s script and turn it into an emotionally charged and heartstring-pulling affair with a perfect blend of emotive art around the human and animal figures combined with the sci-fi elements required to tell the story. The cube geometric breakdown, in the end, is a brilliant departure from the typical depictions of “alien” technology and truly as the fundamental “blocks” of reality appear to pull apart. The splash
pages are geometric alien wonders as Sorrentino delivers us a conclusion that is an ending but also feels like a beginning. The balance between the cold hard sci-fi elements and the emotive character-driven story elements is managed with masterful aplomb. The colors by Dave Stewart steer the eye in ways that make you appreciate even the smallest details in an image while every speech bubble and word placed by Steve Wands ensures the narrative thread of words clearly communicates the emotion of each word laid before you.

Primordial #6 may not be the kind of ending that makes absolutely everything clear and I’m certain it will have detractors because of this but for me, it’s a
smart, heart-felt ending to a gem of a sci-fi tale.

Primordial #6 is a smart, beautifully executed, emotionally charged conclusion to a story that is masterfully told by the entire team on all levels in an open-ended manner. We are presented with an ending that could be the ultimate ending or a beginning depending on one interpretation of the events presented on the final pages. It's brilliant emotion-laden Sci-fi that makes you think which is in my opinion the best kind.

PRIMORDIAL #6: There are no endings…