Project Superpowers: Fractured States #1: When, Where, And Who Am I? 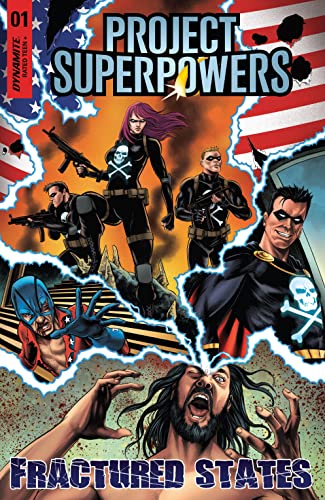 As the nation is torn apart, someone is murdering all the patriotic heroes.

A mysterious amnesiac awakens in a sealed underground base, naked and abandoned. This John Doe emerges to the year 2052 when the entire Project Superpowers Universe has been turned on its head. The United States is no more ravaged by environmental disasters and fragmented into warring regions. The Black Terror is now many — revolutionaries trying to save the republic. But who IS John Doe? Why can’t he remember anything? And does his presence in this brave new world bring its salvation…or its doom?

This story opens with action and ends in mystery. Even the beginning is shrouded in mystery. The time is just referenced as the “near future” what does that even mean? The Flag’s assailant is shrouded in mystery; we do not know who or what they are? We do not get much about Flag except that he is a patriotic hero who is in way over his head; however, he heroically continues fighting.

The next scene introduces the amnesiac, John Doe, as the reader can only surmise that he is the hero, Flag, because he wakes up just after the reader sees the Flag go down. He is naked and disheveled; Flag is clean-cut and wearing a mask. The only real clue to this character’s identity is that he seems to remember Bob, the original Night Terror. That memory is awakened when he sees the Knight Terror Militia. It is during this meeting with the leader of the Night Terrors, who calls herself Bobbi, that we learn that the year is 2052, and we are not in the United States anymore. We are in a dystopian future, and the USA has been fractured. What happened and can this future either be saved or stopped can only be asked. The final pages create a new mystery, who is John Doe, how can he fly, and what other powers does he possess?

The art is the typical superhero-style art. What allows this art to sing and create the mood is the coloring. As we watch John escape, the colors are very muted as we see him swimming out. The danger is intensified as the corridor John finds himself in is colored with the red emergency lights. This light distorts our view of the character. When he finally breaks out of the pipe, the colors are still muted, showing the night and the main illumination, and the first thing we all see after John is saved from the monster gator is the skull and crossbow emblem that sparks John’s memory of the hero Night Terror. Later we see the emblem glowing on the costumes of the entire force.

This is a great opening chapter and at the same time it is a great jumping on point for readers that are not familiar with the Project Superpower universe.  It creates suspense and mystery as the reader is trying to find out what is going on.

Project Superpowers: Fractured States #1: When, Where, And Who Am I?