Psi-Lords #4: From Earth to the Moon 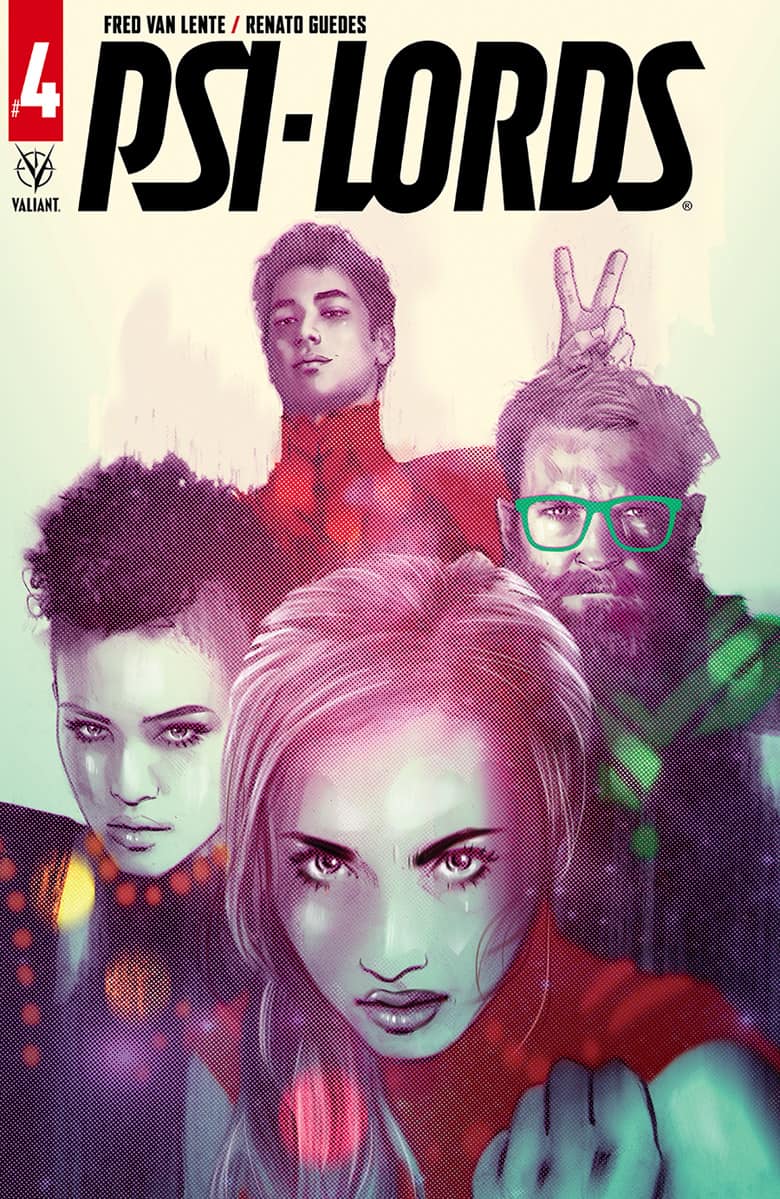 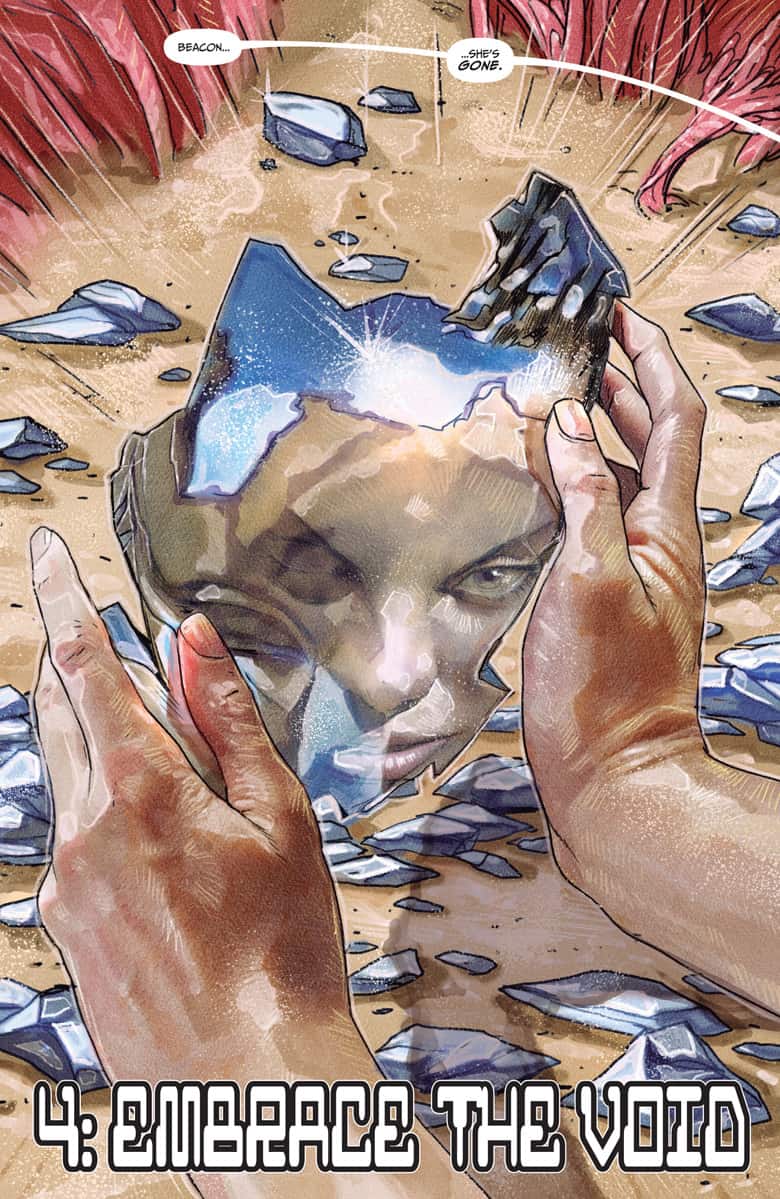 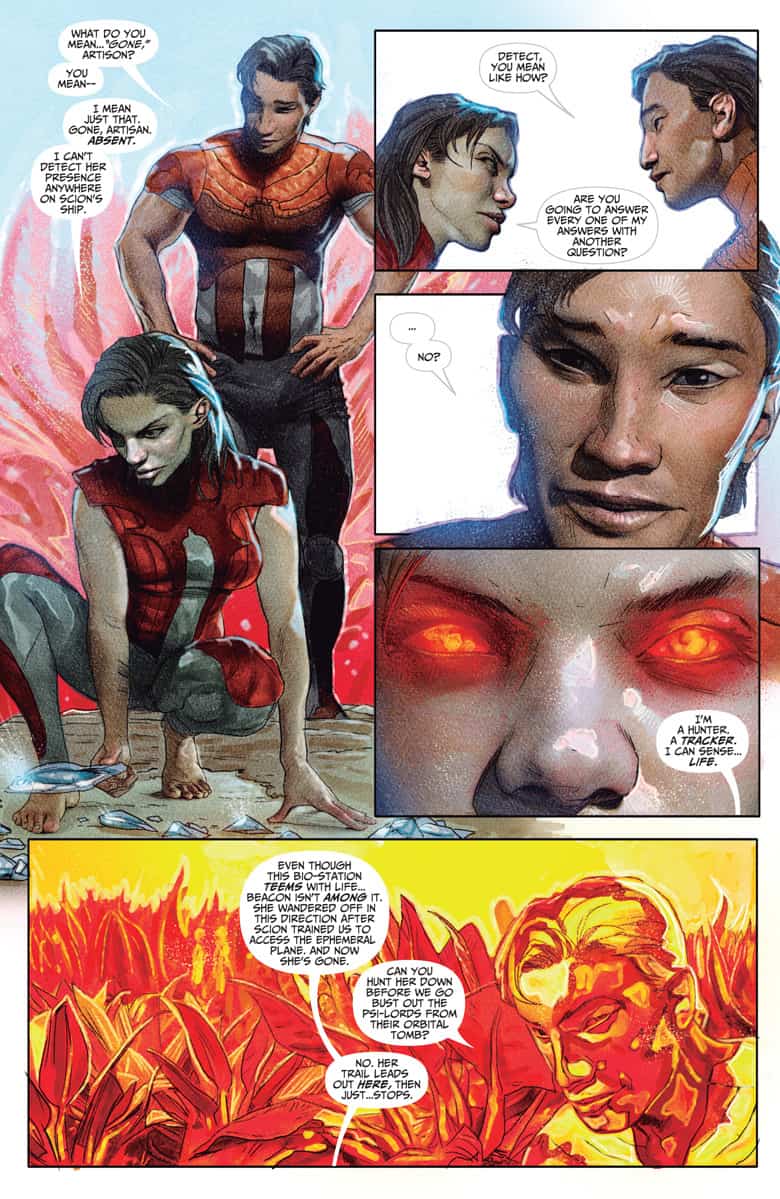 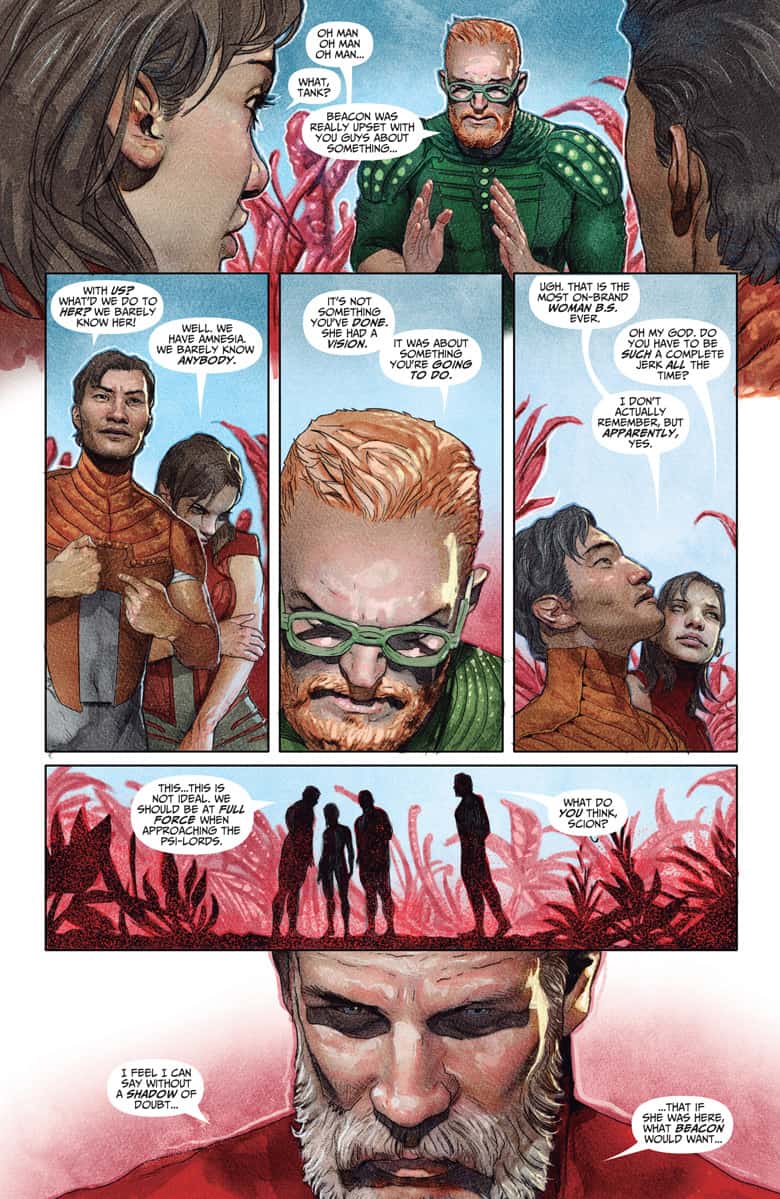 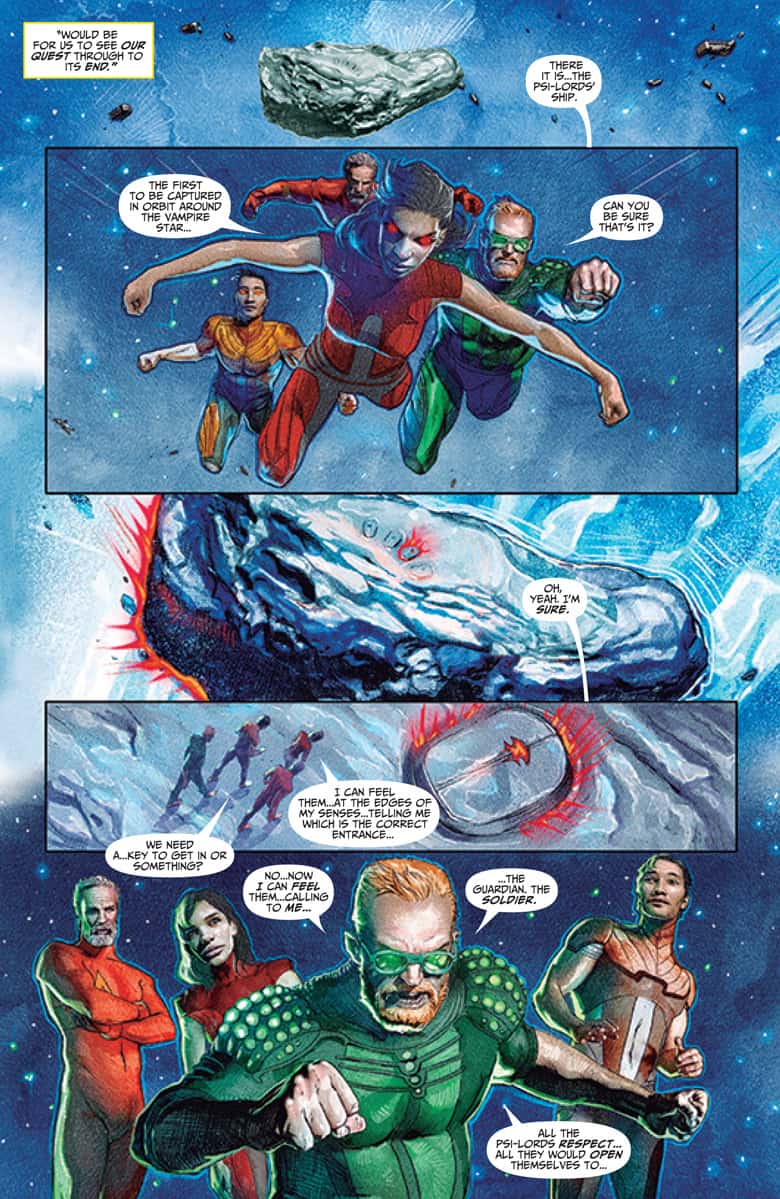 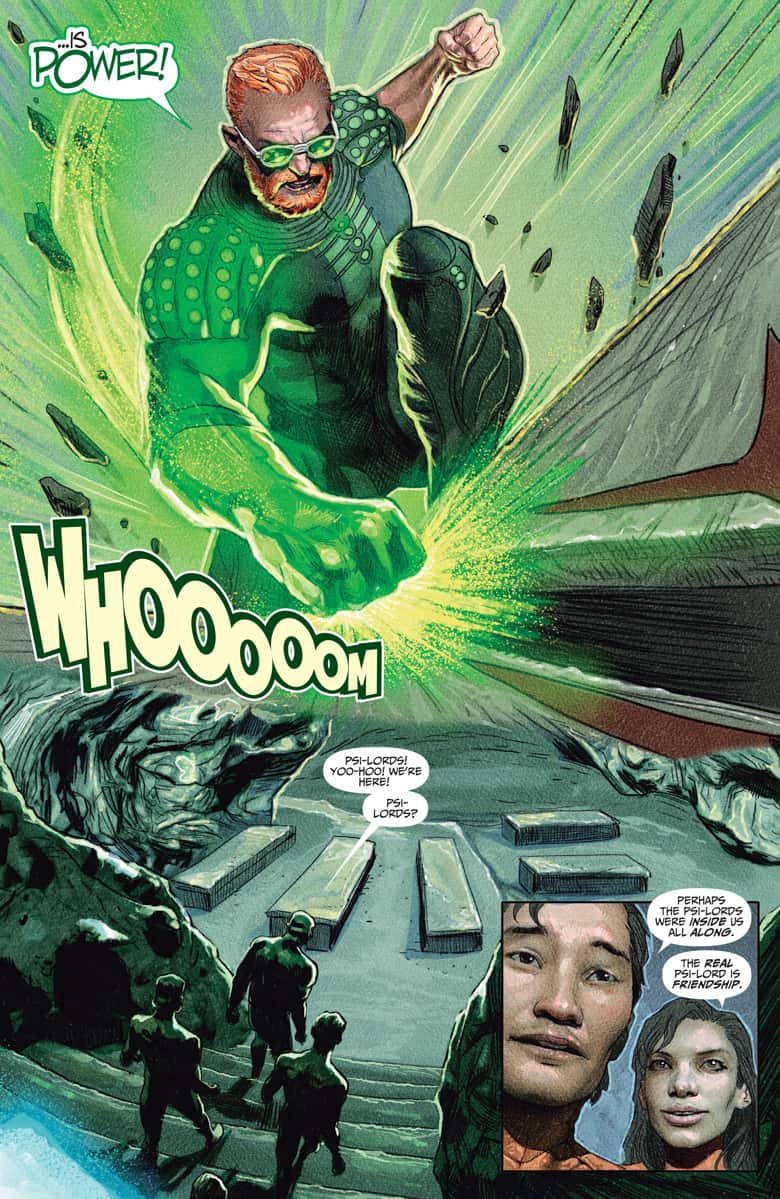 The gang finally makes it to the X on the treasure map, lead by Scion the crew gets to the Psi-Lord ship which promises to free them from the impending doom of the vampire star about them. But Hazard, Artisan and Tank are about to learn the drizzly fate of their missing teammate and the true nature of their "guide" Scion.

Okay so before we get to anything else, can we take a minute to deeply focus and appreciate just how beautiful Renato Guedes’s art is? Every issue so far has been flat out spectacular, but this one? Bruh this issue right here, this issue right here though?!? Straight up fuego. 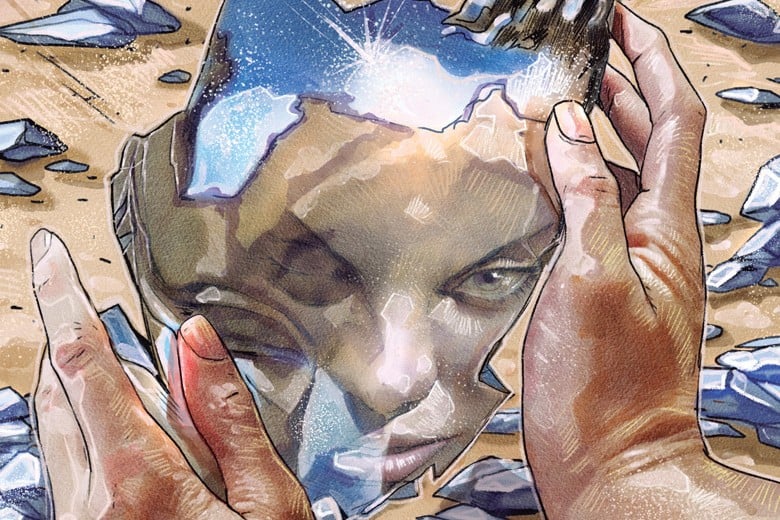 Guedes kills it in every single panel, from the infrared vision showing Hazard’s sick tracking abilities, to Beacon’s brush with death and even the anime like “power of friendship” style super attack we see later on in the issue. Even more so the grim visage, the “well crap dude seriously???” of the Widowers went they return to settle old scores. Renato Guedes just nails it harder than driving rail spikes. I was already a fan and when you consider he’s handling all aspects of it solo it makes it even more impressive. If you’re a fan Simone Bianchi or Andy Kubert (think Sergeant Rock or his Marvel 1602 work with Richard Isanove) or just stellar artwork in general, you’re cheating yourself if you are not snatching up every single issue of Psi-Lords.

Now let’s talk about your boy Fred Van Lente. At this point I was already like “good job homie, keep it up” but I’m not gonna lie I’m impressed here not so much with his writing of the action but the subtle nods to the bigger Valiant universe we all love. Up til now I mainly assumed this was either a solo venture that would be vaguely attached at best or it would just be a mini that ends being potentially new ground future writers may or may not expand upon. Instead what we got is some solid roots with G.A.T.E. the Valiant equivalent of S.H.I.E.L.D. or ARGUS appearing heading by none other than Brigadier General Capshaw! If you’re unfamiliar, Capshaw is a certified G.I. Jane kinda hardcore chick who makes Nick Fury Jr. look like amateur hour. She’s had some great appearances in Faith, X-O Manowar, Armor Hunters, Unity, Quantum and Woody and some others I’m either forgetting or am too lazy to Google at the moment (don’t judge me heathen!). So suffice it to say she’s a lesser known but awesome character so seeing her pop up and be the Jackie Brown-esque diva who essentially puts this whole thing in motion is pretty rad on all standards of measurement.

Van Lente has crammed so much development despite the whole amnesia thing and just genuinely made this Scooby Doo posse into characters you actually care about. With only one issue left one can only hope he’s already got Psi-Lords 2 in the works. I’m actually finding myself torn between wanting to see more of them getting into wild space shenanigans, maybe even teaming up with our beloved Aric of Dacia/X-O Manowar and seeing what would happen when this “United Nations” of Psionic superheroes lands on Earth considering the turmoil from Harbinger Wars 2 fallout. Regardless of which way they go with it, the future of the Psi-Lords looks pretty amazing and I said it before and I’ll say it again, the Valiant universe is all the better for this book being in it.

Psi-Lords #4 [Van Lente/Guedes] is a fun mind trip through space with some simple beautiful art, Psi-Lords blends witty humor, sci fi action and good ole fashioned weirdness that only the gems of the comic medium can deliver.

Psi-Lords #4: From Earth to the Moon