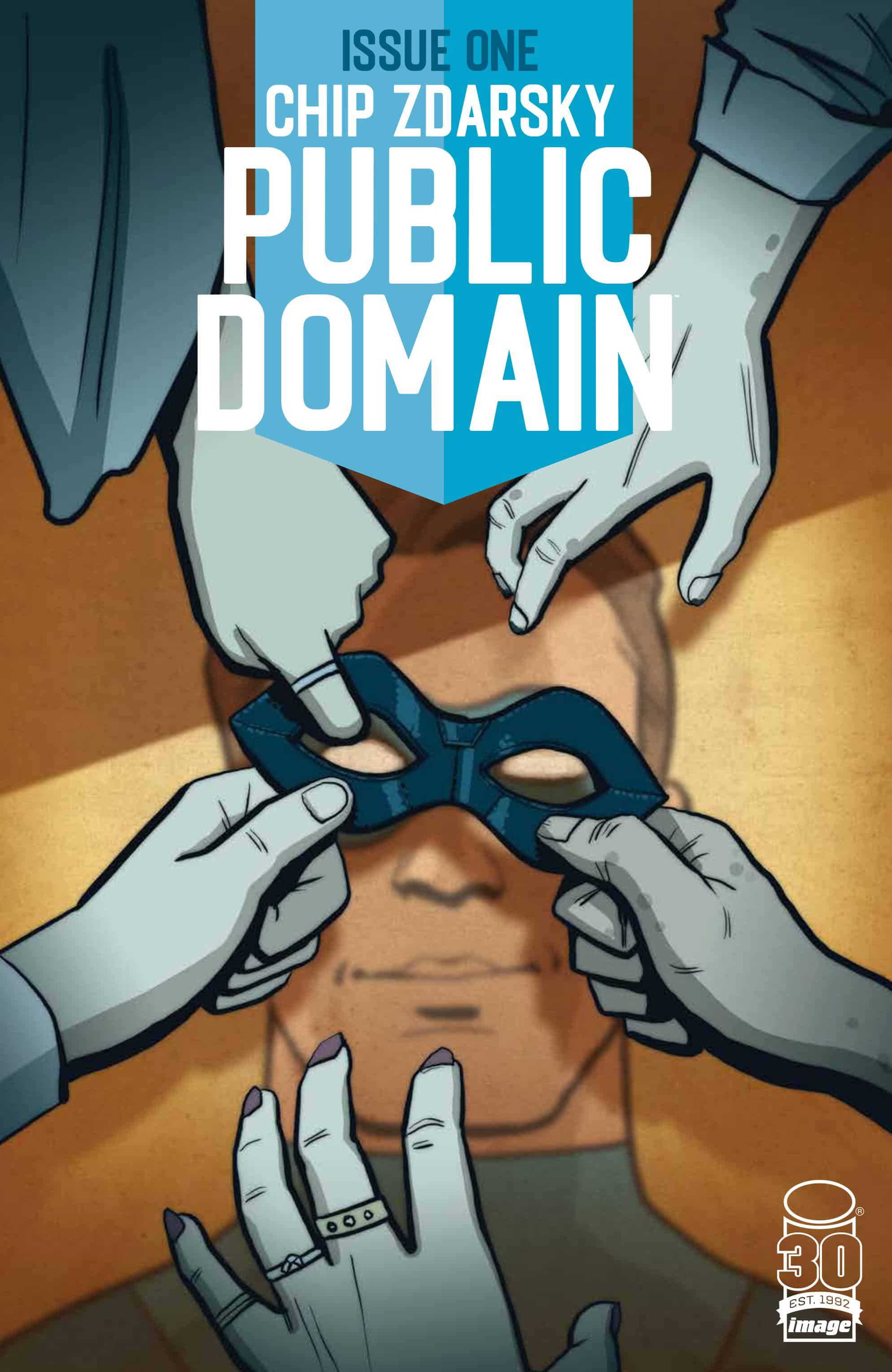 Syd Dallas is responsible for pop culture’s greatest hero: THE DOMAIN! But his sons Miles and David have a complicated relationship with both the creation and their creator. Can they convince their dad to fight for their family’s legacy?

As comic book movies have burst into the pop culture landscape, dominating box offices year after year, questions of compensating and credit creators have magnified. In some instances, creators have spoken about making more from a SAG (Screen Actors Guild) minimum for a small cameo than what they were paid by the mega-corporations that own these publishing houses for creating a franchise-spanning character. Rights to characters and elements have also seen a large argument in the last decade or so, with long-standing creators finally being given some of the credit they rightly deserved but never got to see. As comics have been thrown into the spotlight thanks to the cacophony of cinematic universes, TV franchises, and more, the usual work-for-hire creative teams are the ones that get thrown under the bus and forgotten first.

At its heart, Public Domain #1 written, drawn, colored, lettered, and designed by Chip Zdarsky is a book exposing what happens to those left in the wake of the media juggernaut tearing comic creative teams apart. The series was initially launched through Zdarsky’s Substack as a digital series, before being printed and published by Image Comics. Substack itself made headlines for giving creators an alternative way to tell their stories while retaining the projects as their own, something that feels in line with the ethos of this series.

Public Domain follows the story of the Dallas family, whose patriarch Syd, was an artist who worked on and helped create a superhero universe around the character The Domain, with writer Jerry Jasper. What happens, however, is all too common, and Jerry gets all of the rights and glory that come from the comic’s resurgence when Hollywood gets its grip on the publisher, Singular Comics. Syd gets thrown to the wayside, lucky to get a thousand dollars and a plane ticket to the movie’s premiere, while still living in a tiny house in the suburbs, while Jerry is living life to the 10s in a sprawling, seemingly west coast mansion. Zdarsky doesn’t waste time dumping exposition or weaving tales of woe but instead reveals all of this through backgrounds and quick scenes that jump from the book’s cast. Our entry character into this world is Syd’s son Miles, an entertainment writer for an honest-to-god newspaper, standing out from the typical bloggers also leeching on the drippings of these giant tentpole movies. We’re also introduced to Jerry’s assistant Tanya, who’s striving to write comics herself, but relegated to a bartender in a pantsuit, and strikes an instant connection with Syd. They’re two people that just love comics, and while it’s nice the medium is getting the limelight, it’s evident neither cares about that. The issue ends with Tanya coming across some documents that reveal Syd may be the legal owner of the character, and is an excellent cliffhanger to set the rest of the series into motion.

From page one, Public Domain feels timely and hyper-relevant in today’s comic book landscape but is still accessible for non-comic history fans. It doesn’t matter if you’re someone who loves the context and history behind Superman’s trucks, Spider-Man’s everchanging eyes, or why Vertigo made the waves that it did. The history enriches the story and deepens the narrative Zdarsky is building, but new readers, those more interested in the independent scene or the ones that just don’t care about the past (sad as that may be), there’s more than enough in the characters and plot that will keep you hooked. Miles’s jaded cynicism about the industry and what it did to his father, Syd and Tanya’s connection and love for the craft, and even Jerry’s smarmy attitude all feel so lived in and fresh, that it feels like this could be issue 50 of a series. Even with little backstory and information, Zdarsky makes sure this world and the conflict feel lived in since, for these characters, it has been a lifetime of upsets and frustrations that have baked into the characters.

Zdarsky’s scripting and characterization fire on all cylinders in the issue, but it’s the art and coloring that make the book tip past great into something possibly transcendental. The way framing and panel composition shapes the story is an amazing component of this book. The sequence that stands out isn’t a sprawling splash page, or an epic, universal spanning action sequence. It’s a quiet moment where Miles walks down a staircase to Syd’s basement, which is equal parts studio and hobby space. The first two panels are a silhouette of Mile’s legs on the stairs, with his Father’s easel showing in the third panel, rendered as it would appear. Something about the way Zdarsky uses the negative space and foregrounding of the silhouette draws the eye straight to it and leaves you enthralled. I’ll admit I just stared at the image for 5ish minutes, soaking in the detail. That choice of coloring, panel composition, and rendering speaks not only to Zdarsky’s skill as an interior artist but as a designer as well. He can create a striking image from the most mundane of elements and use it to convey a million feelings and thoughts into a concise, simple design.

Zdarsky’s design skills are indeed a massive boon to any project that gets to see them in action, but his interior art skills are not lacking either. It’s especially in the way that he can render facial expressions that play up both the emotion and comedy. The simplicity of his linework works perfectly in portraying these characters with decades-spanning, conflicted emotions. With a few strokes of a pencil, Zdarsky creates a tapestry of love, hurt, pride, pain, and fury. The sequence where Miles goes in for an interview with the actor for the new Domain movie is brilliant, blending that comedic sensibility at the beginning with the soul-crushing realizations about the grinder that is the entertainment news cycle.

Zdarsky gets to throw out genius outlet names, like Basement Sexual Jedis and Entertainment 4ever (which I really hope he trademarked), and then reveal just how little print media is cared about in these junkets. It would have been easy for Zdarsky to rest on the comedy and end the scene with this bit, but just like the rest of the book, he nails hammers in the heart by exposing Miles’s frustrations about the canned lines about “modern mythology” and honoring Jerry’s legacy. The scene sees Miles explode and vent some of that frustration, in a way to try and stand up for his father’s name and legacy. Ultimately it leads him to jail for the day, but there’s no change in the world, and it’s nothing more than a small blip on the studio’s radar. Zdarsky’s art never fails or lacks in these sequences, and at times the writing feels like it’s catching up to the art, trying to verbalize the emotions that he’s able to deftly render on the page.

It’s hard to not also see the autobiographical elements of the book, from Miles’s resemblance to Zdarsky himself to the split career focus between comics and newspapers to starting focus through the artist’s perspective that then switches to the writer, mirroring Zdarsky’s path in the industry. More than any of his previous works, both as a writer and an artist, this book hits an emotional note that resonates with every page. The story and conflict at the center of this issue, and what has to be assumed about the series as a whole, is a personal one, as Zdarsky is a creator living in an age where those around him are consistently suffering the injustices of corporate comics. It would be almost impossible to find a creator that isn’t affected by that in some respect, and it’s clear from the title page of the issue, that this is a personal story for Zdarsky. With him also shepherding this story from all angles of the production, from the scripts to pencils to colors and beyond, the book feels even more personal, since it is a culmination of a singular point of view in industry and medium built on collaboration. That willingness to share and to create is inspiring and pushes an already great book to be something even more special.

At the core of this issue, is a raw nerve pulsating with history and experience that makes Public Domain a must-read for anyone who enjoys comics, watches movies based on them, or cares about the people behind both. For as spectacular as this issue is, you shouldn’t expect to make corporate suits feel bad about how they’ll continue to marginalize and hurt creators or take from them, even though it should. But hopefully, for the people picking this series up with little information about what it's like out there for creators or those who think that making comics brings wealth and eternal happiness, it will serve as a lesson in reality. Zdarsky is the master at both comedy and drama and realizes they stem from the same place, which is a jumble of something more complex.

For those who have slept on Zdarsky’s newsletter, and by extension this book, Public Domain deserves to be on your pull-list, as it’ll do what Jack Kirby promised comics to do, which is “to break your heart, kid.” But in the same breath, it’ll also reinforce everything that makes comics great, and remind you that they, and the people that make them, are worth fighting for.