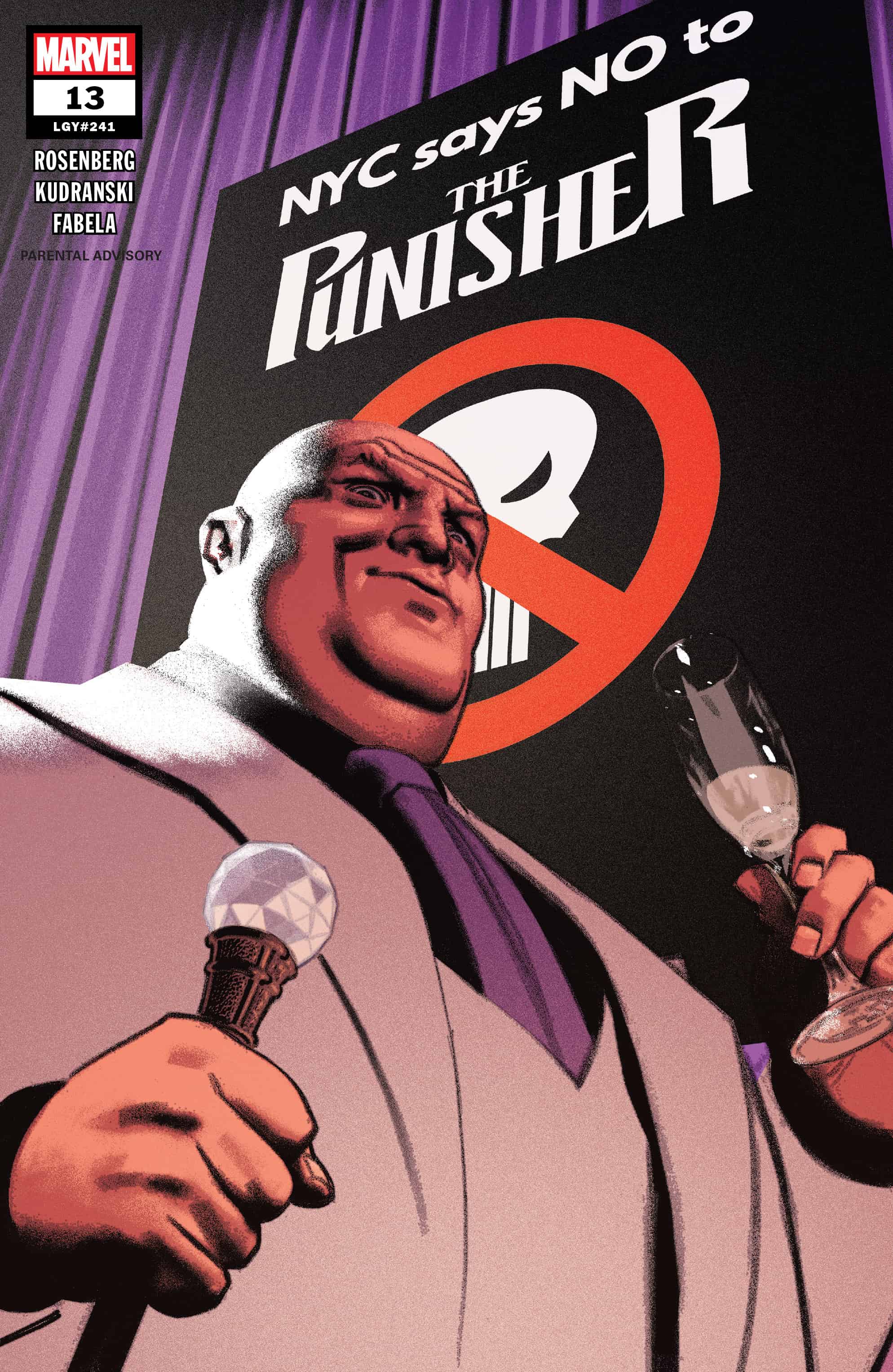 Having survived the depredations of the Hydra-run pseudo-nation Bagalia, the Punisher is back on the mean streets of New York City! First order of business: track down Baron Zemo, starting with the first Hydra head that sticks itself up from under the ground. 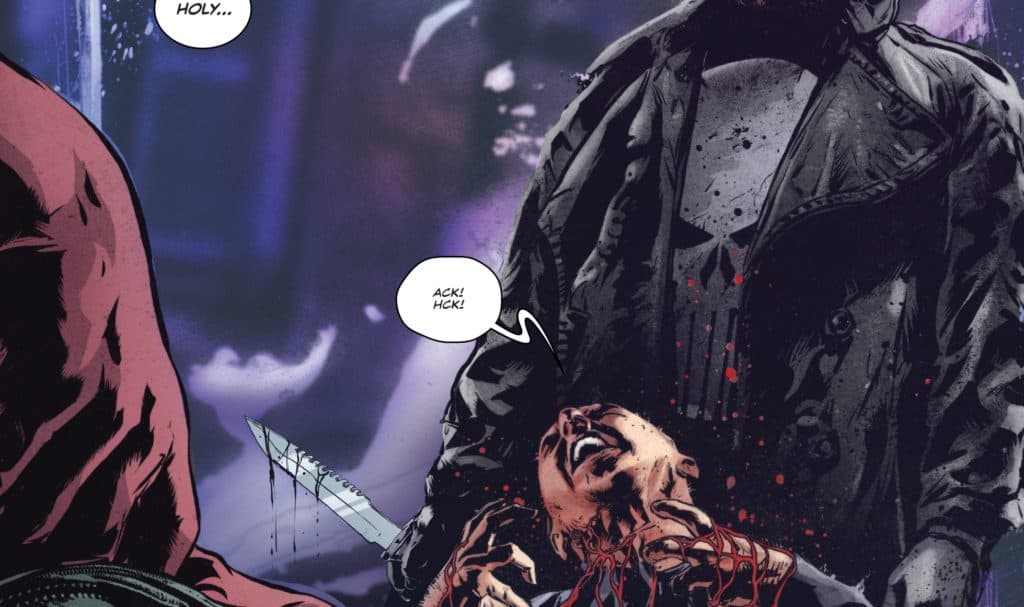 In an interesting wrinkle, though, the Punisher has a new fan club... within the ranks of the NYPD! 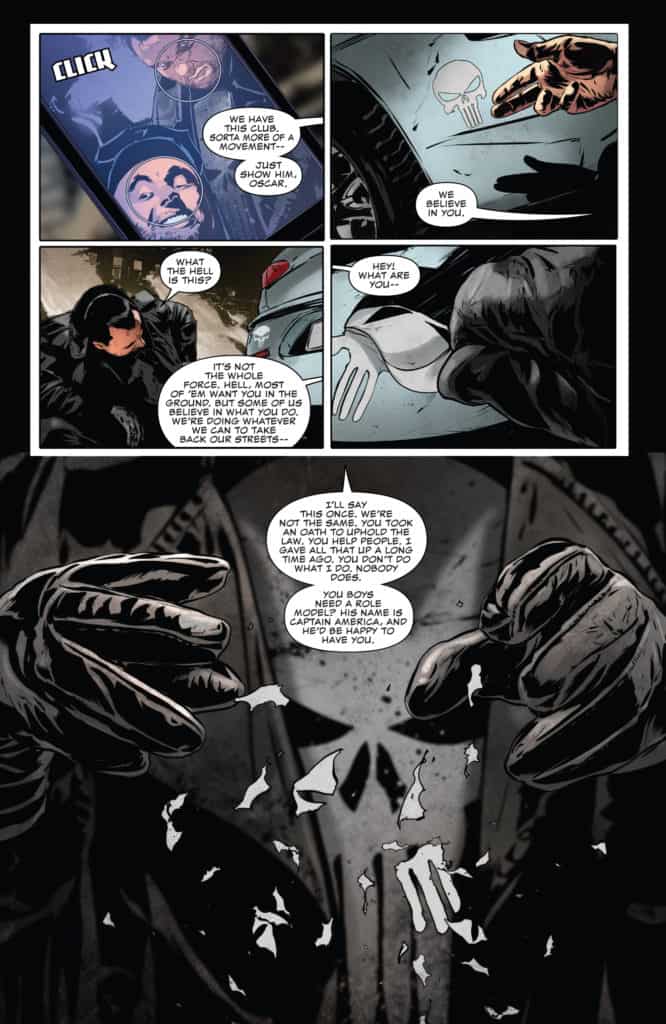 Incensed by his dismissal, the cops leave him be, but caution that he may very quickly be without friends anywhere in the city if he continues at his current pace. But Frank has a much, much bigger problem than that: Zemo has come to Wilson Fisk - former Kingpin, current mayor of NYC - to form an unholy alliance with one goal: annihilate the Punisher by any means necessary! 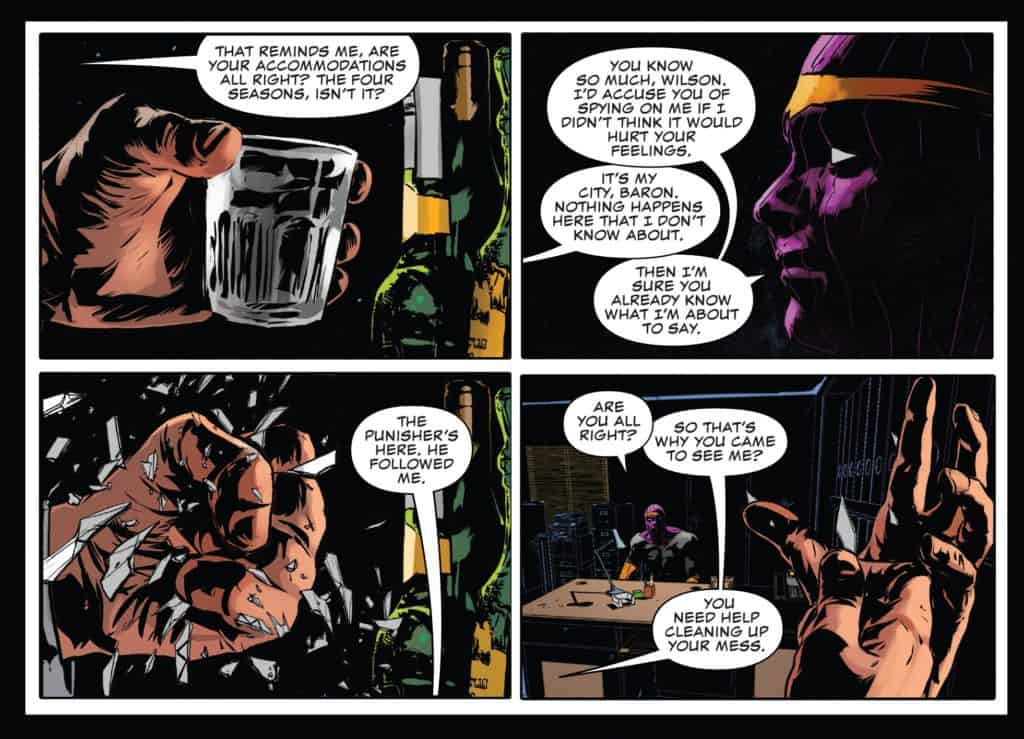 Zemo has a huge plan, but it will require Fisk's cooperation - in addition to a few hundred U.N. troops, and a very special plan that will involve Zemo resurrecting an old favorite (and fan-favorite) ploy from his past! But can Zemo and Fisk put their egos aside long enough for anything at all to be accomplished?

Matthew Rosenberg’s Punisher returns to full form after a few mediocre outings in recent issues. There’s something about Punisher prowling his natural habitat of NYC that just feels right – up to and including his fraught interactions with the fawning NYPD and his merciless execution of a would-be mugger. The grit and the grime of 1970’s NYC may be a thing of the past in real life, but thanks to Szymon Kudranski’s ink-black, mood-encrusted renderings, it sure doesn’t feel like it.

Rosenberg’s overarching story thus far has been leading to Frank’s big comeback on his home turf, after being betrayed by Nick Fury and whisked away to Bagalia to become someone else’s problem. He’s still hunting Hydra, but now he has the tactical advantage. The apex predator is at home in the urban jungle, and everyone else is just a target waiting to be devoured.

But this isn’t the same New York that Frank is accustomed to. This NYC is run by Wilson Fisk, a brutally effective stand-in for any corrupt authority figure you can think of – but with the lethal network and cunning to back up his base instincts. That changes the game considerably, because at any juncture, at any turn, Frank’s environment can be turned against him. Add Zemo and his machinations – not to mention international connections – to the mix, and things suddenly don’t look so cozy for Frank.

It’s a set-up I’ve been pining for for quite some time now for Rosenberg’s run. Things have come far too easy for Frank, with issue after issue of him mowing down foes without breaking much of a sweat, then moving on to the next few dozen goons to kill. It’s been stupidly “just turn your brain off and you’ll be fine” fun at best, and blandly monotonous at worst. But as “War on the Streets” ramps up, the odds are suddenly against Frank, and anything could happen – in the best way possible.

"War on the Streets" heats up, and the odds are stacked against the Punisher - and with a fan-favorite set of characters poised to make their big comeback next issue, what more could a fan ask for?

Sex Criminals #29: The Art of Grieving and Other Such Tools of Self-Destruction
June 30, 2020