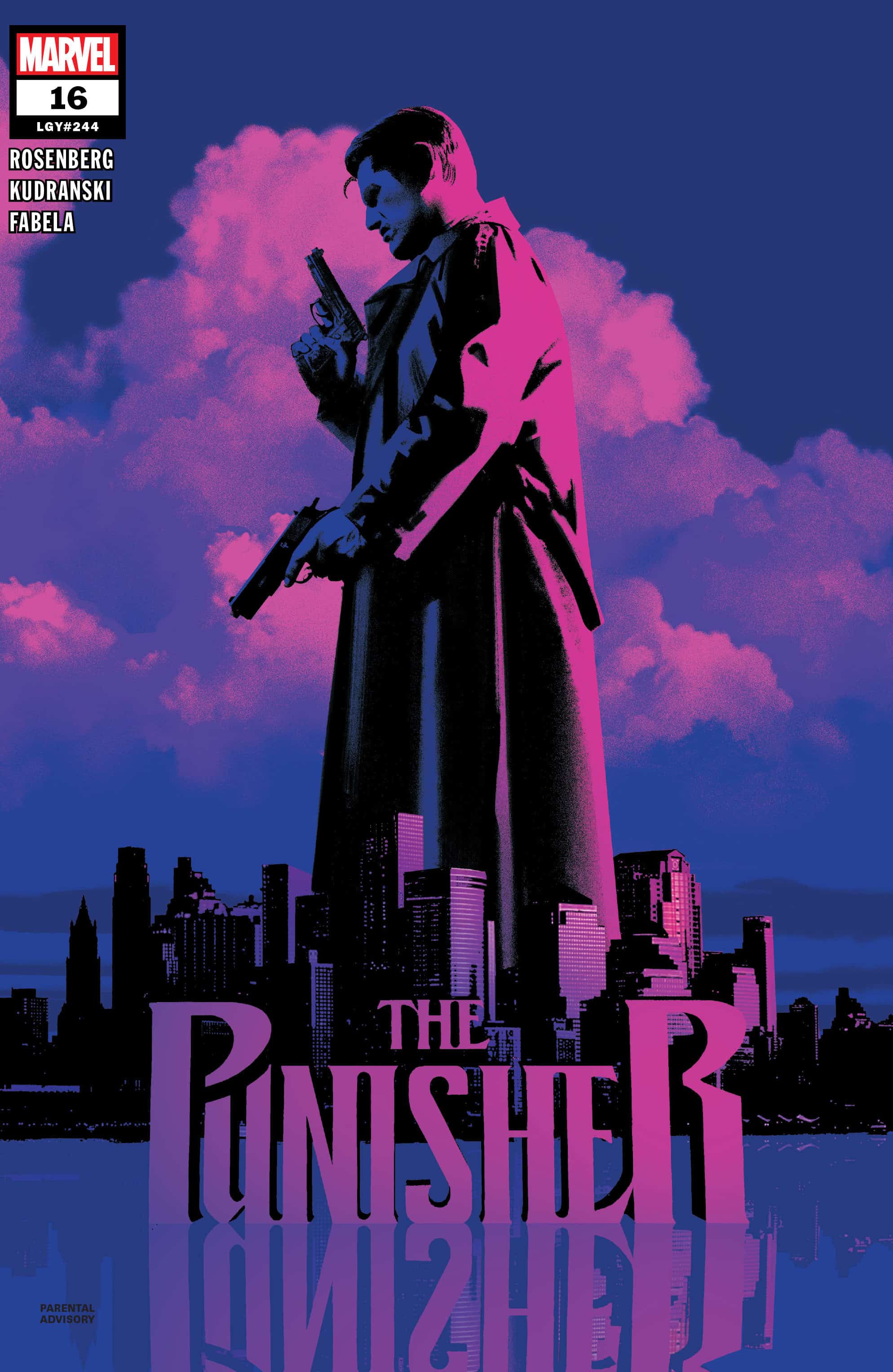 As the dust settles from the Punisher and company's dramatic confrontation with Baron Zemo's reconstituted Thunderbolts, lines are drawn, and the rag-tag group is split just as quickly as it came together.

With only Ghost Rider at his side, Punisher charges in for one final confrontation with Zemo, with Rachel Cole-Alves' life hanging in the balance!

But in the end, though, it can only come down to a mano-a-mano fight... where only one contestant will walk away!

And so writer Matthew Rosenberg’s tenure on Punisher ends with on a predictable, but still well-executed bang. There was never really any question about how Frank Castle’s feud with an established Marvel villain like Baron Zemo would end, but it’s still been a pretty fun ride getting there. This issue (before ne plus ultra Punisher scribe Garth Ennis returns next month for a new miniseries) goes hard from the start, with Punisher being called out by allies like Night Thrasher who can’t believe the Punisher wants to kill someone. Um, Night Thrasher? Buddy? That’s LITERALLY ALL HE DOES. Therefore, the opening scene is a conflict set on a completely false premise, which really gets to the heart of an inherent problem with Rosenberg’s run, and Punisher teaming up with spandex-clad superheroes at all: he’s a mass murderer. Everyone knows this, yet literally for decades, the heroes look the other way when it benefits them to team up with him, and subsequently act with complete surprise when he ventilates some scumbag’s skull with a hollow point. That speaks to a larger problem for the Punisher: his role within the Marvel Universe must evolve, or he’s going to continue to be a watered-down version of himself.

Frank Castle is a direct reflection of America in the 1970s. The feel-good ’60s had dissipated, and in their wake was a steamy miasma of paranoia, tension, recession, inflation, and fear that the nation’s best days were behind us. Then there was the backlash against the social revolutions of the ’60s, that the boy next door might be one of those ganja-smoking hippies, who, as we all knew, were lawless, morality-free scum. Reflective of this fear was Dirty Harry, it’s madcap spawn Death Wish, and Don Pendleton’s “Executioner” books, from which our boy Frank most directly owes his existence. These stories and many more like them took that fear of the change the ’60s had wrought and created a counter-perspective, that the only way to fight that fear of change was to face it head on, often with a greater extremity of violence than was being perpetrated. Fighting fire with napalm, and napalm with ICBMs.

Writer Gerry Conway must have known this when he created Punisher back in 1974, and to be sure, in all of his earliest appearances, the Punisher is not exactly portrayed as a force for good. He’s always at odds with the heroes, and with good reason: his vengeful killing frenzy stands in direct opposition to their own “no killing” codes of ethics. But as the ’70s turned into the ’80s, and macho men action stars like Schwarzenegger and Stallone and Lundgren and Seagal were mowing down bad guys by the hundreds, all sense of social commentary evaporated from these types of tales and suddenly it was just the thing to do to drop a dude because he looked at you funny. And it was into this maelstrom of greased-up one-liner spouting tough guys that the Punisher really found his niche, because it was really only in that atmosphere that he could fully thrive.

It was during this oversaturation period that Frank lost his way a bit: after all, you can only go up against Kingpin so many times and come up empty-handed before credibility begins to wane a bit. And you can only team up with Spider-Man so many times and get away or be told “Okay, we’ll work together but you can’t kill” before it becomes an eye-rolling trope. So the Punisher fell victim to his own success, had some lost years, but was resurrected at the turn of the century by Garth Ennis and Steve Dillon, who with “Welcome Back, Frank,” successfully reset the template and brought him back down to Earth (uh, literally, because he’d previously had a less-than-warmly-remembered stint as an agent of Heaven right before then) – killing anonymous street-level scum with a vengeance (and the occasional polar bear).

And now, after years of that and the occasional flirtation with mainstream Marvel (most weirdly post-Civil War, when he briefly became an ersatz quasi-Captain Punisher America), Matthew Rosenberg has concluded his run that made absolutely no bones about dipping Frank back into the the Marvel pool. The first volume of his run started with Punisher inheriting (read: stealing) the War Machine armor and having the time of his life (which certainly has its own completely bonkers logic to it), and then here in volume two, he’s been engaged in an ongoing war with Baron Zemo and his entire Hydra-run country of Bagalia. And despite a few issues throughout that resorted wholly on explosions and over the top killing sprees, it’s been a pretty successful experiment in what it looks like for Frank to be firmly part of Marvel proper in the 21st century. Rosenberg has found a formula for marrying the grim executioner of Ennis’s run into the wider Marvel universe without making him feel watered-down, and that should be commended. Because the Punisher is a part of  Marvel, as much as Spider-Man or the Fantastic Four. He’s the grimy, grungy corner of Hell that refuses to go away and exists to drag the evil-doers of the world down into the dark with him. And punish them for their ways. The Punisher isn’t about being a hero. He’s about eliminating the scum of the planet.

So, Night Thrasher: Yeah, the Punisher kills the bad guys. You gotta problem with that?!

Explosive and dramatic, Matthew Rosenberg's Punisher run comes to a satisfying conclusion. Everyone gets exactly what they deserve, and the creative team themselves get credit for writing the best Punisher stories in years.