Punisher #6: Wrong Us, Shall We Not Revenge? 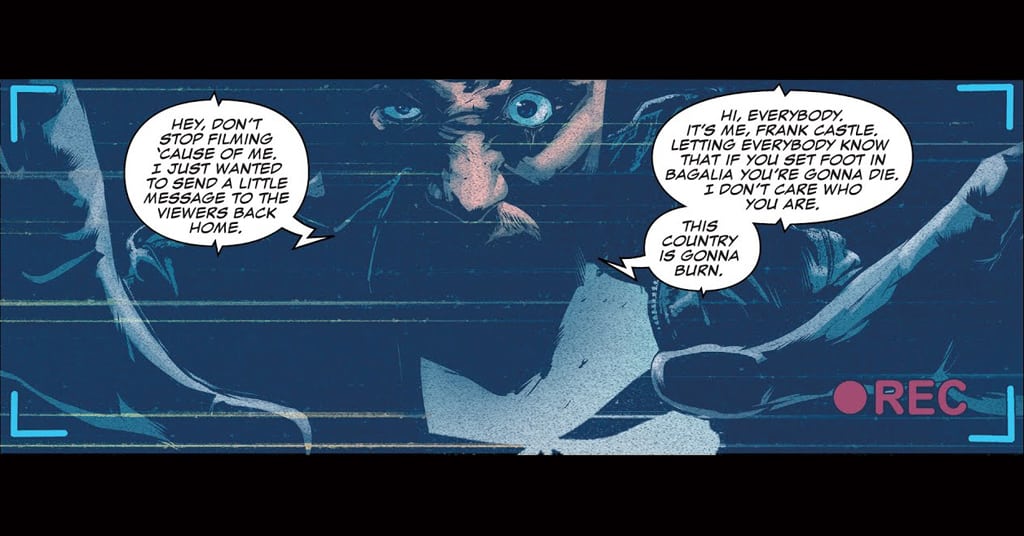 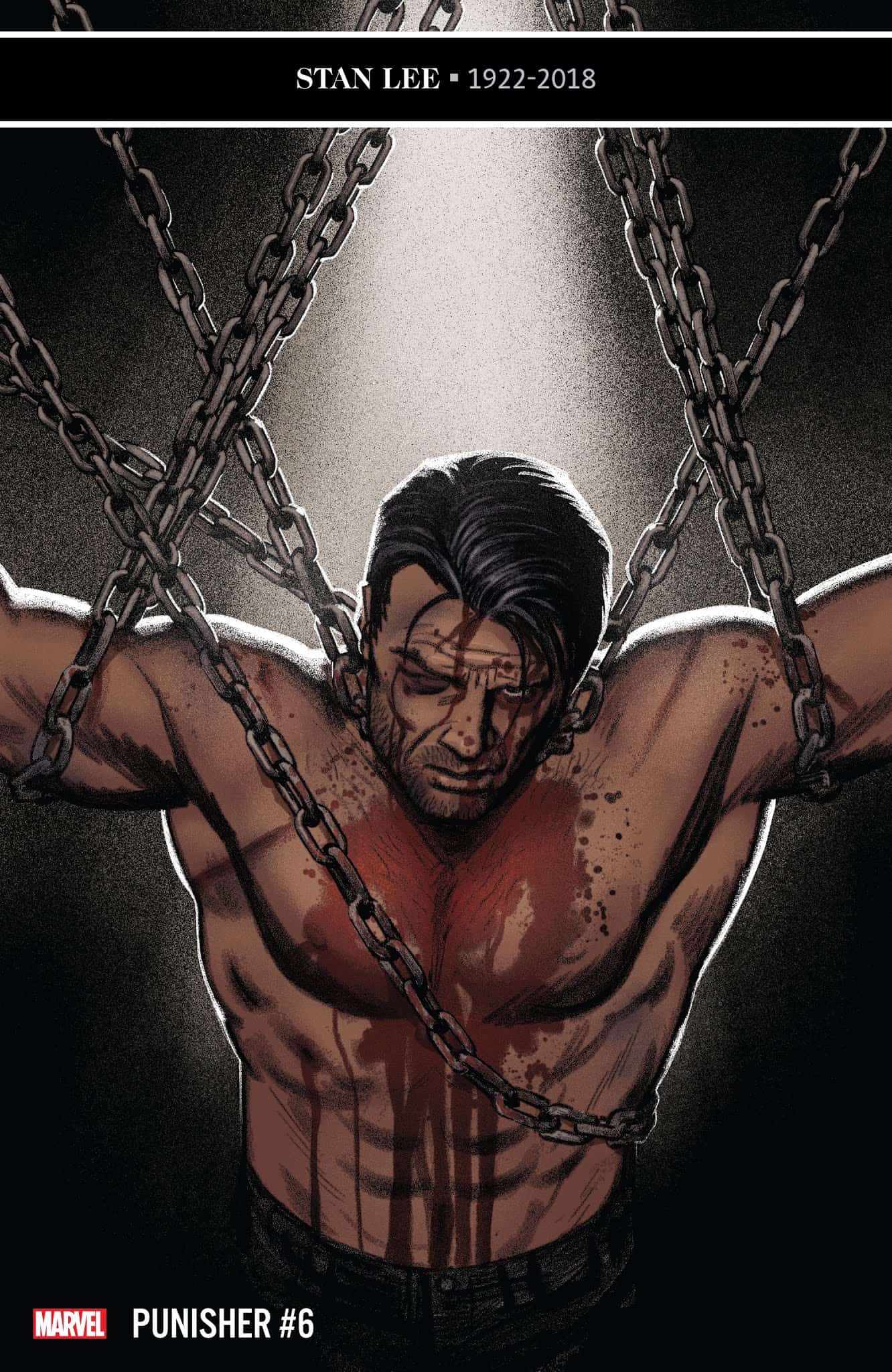 A foreign correspondent is reporting (supposedly undercover though he is obviously being filmed by a cameraperson) from Bagalia, “the most secretive city in the world”. Only seconds after he begins, the Punisher steps out from the shadows and guns him down. Taking the camera, he sends a message to the rest of the world that essentially warns people off from coming to the country, because “this country is gonna burn”.

In the next series of panels, we are given a taste of what a day-in-the-life is for the Dictator of Bagalia. Baron Zemo watches television as he showers, has important meetings, confronts an egg shortage, deals with personnel problems, and shows he’s willing to have people killed just so he can have some “me time”. That “me time” happens to consist of beating, torturing and gloating over Frank Castle’s war-torn body. Zemo also shows Frank the murder of the reporter, revealing that it was Jigsaw in a Chameleon-made costume. 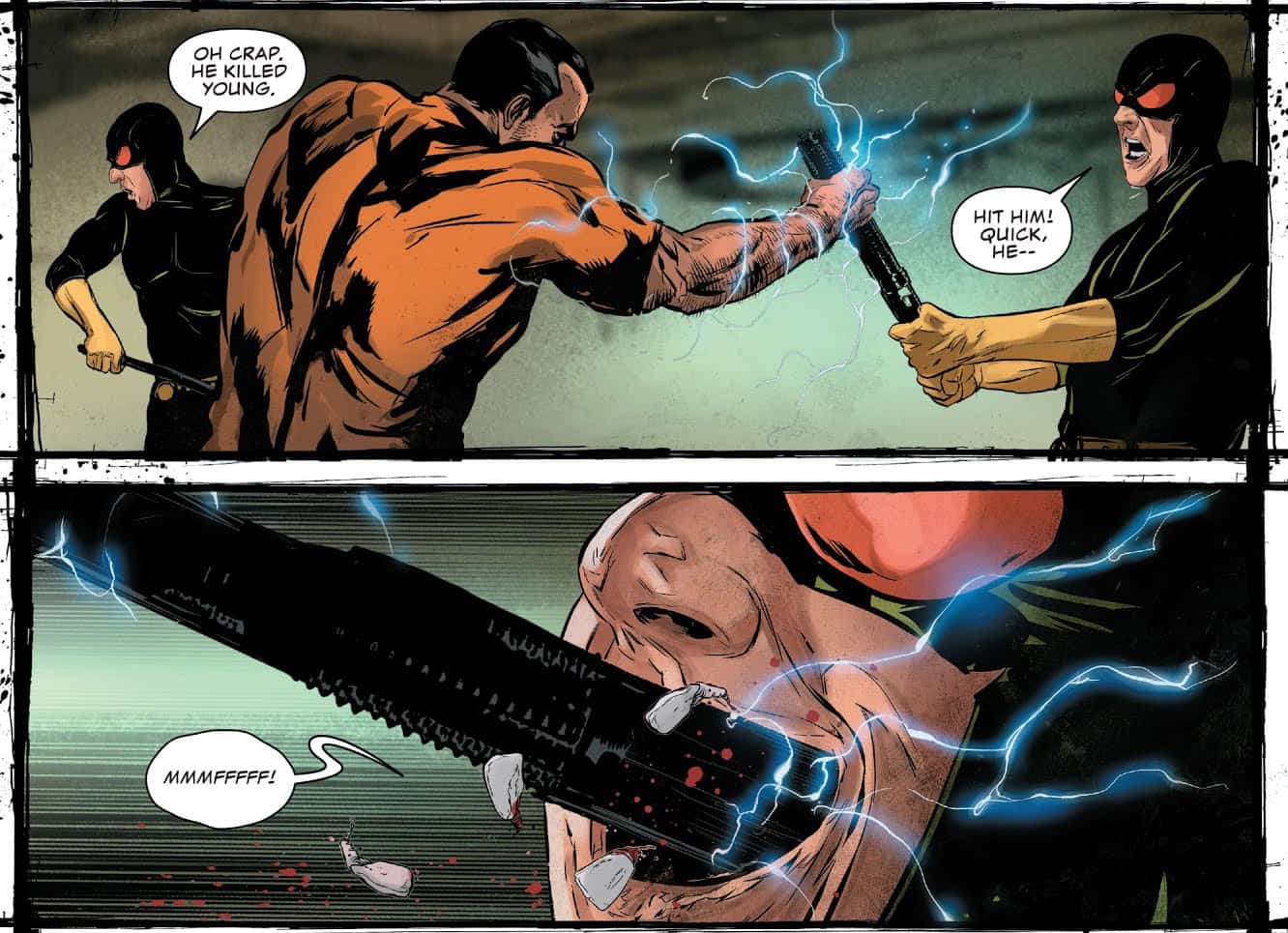 Frank is placed in the general population of the Hydra prison he’s being kept in and is attacked by vengeful Hydra guards. After taking out a few, he’s incapacitated and put into solitary confinement, where he tallies up the days with scratches on the wall. On day 95, Frank is escorted to the showers so that he’ll be clean for when Zemo kills him. While in there, a few prisoners approach him, wanting to talk. Punisher responds by preempting their presumed attack with one of his own; it’s not until they subdue him that they’re able to introduce him to a figure wearing a nun’s habit. She introduces herself as Mercedes Arco De La Carcel, and apparently, she’s here to save him. 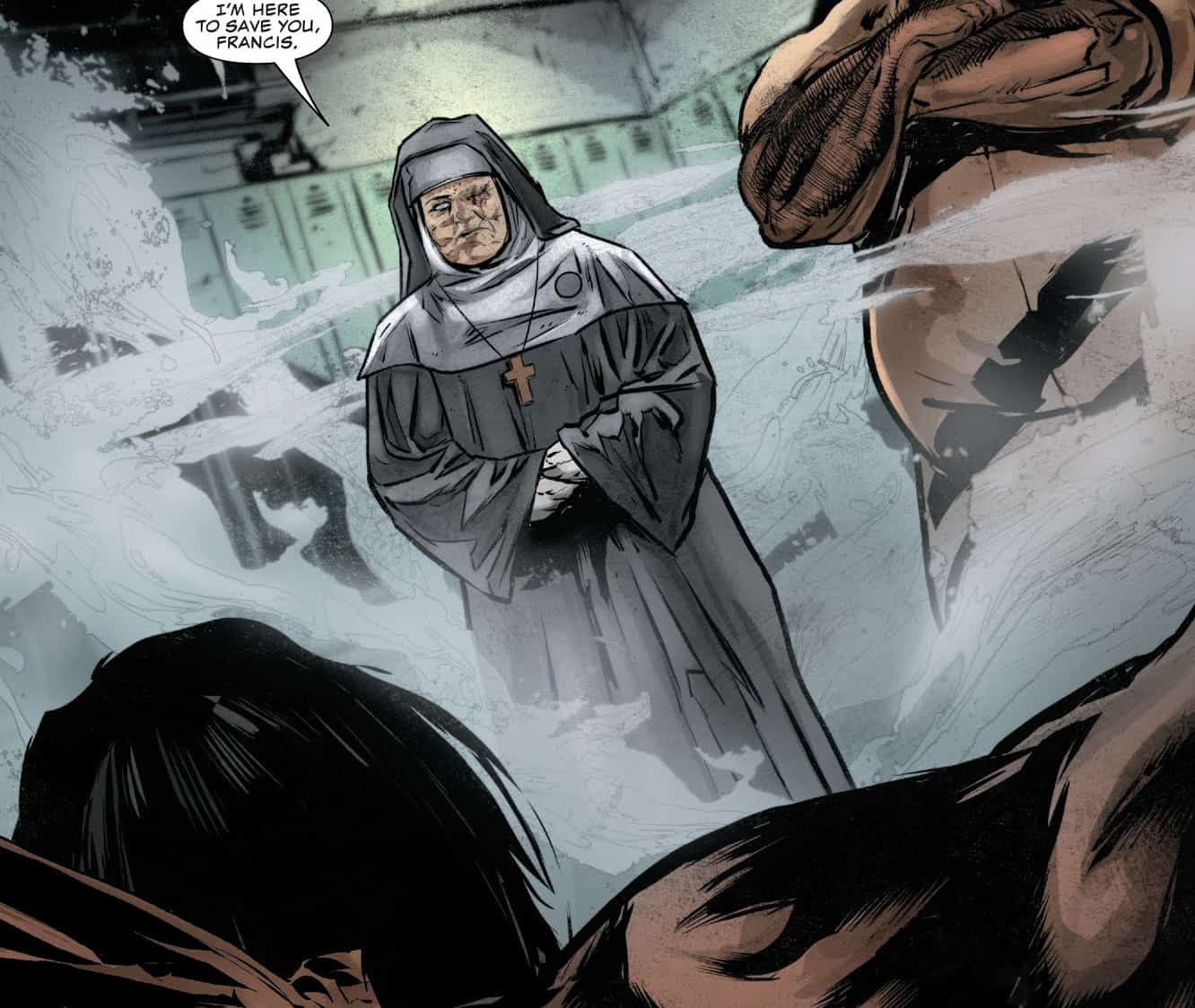 Overall, I’ve loved the art in this run. Kudranski works mostly with rectangular panels, but he does so very well. His understanding of how light and shadow impacts this narrative is impeccable and Fabella takes full advantage of what he’s given to paint this high-contrast work beautifully. My ONLY complaint so far, is Kudranski’s choice of facial features for Frank. He’s a master at either keeping Frank’s face in shadow or using zoomed-in react panels to maintain the mystique of The Punisher and punctuate his emotional states. But the handful of times he’s shown us Frank’s full face, it tends to be off-model (as does his body type/frame), sometimes panel to panel and book to book. Also, it’s one of my least favorite depictions of Frank in recent memory; I’m much more fond of the lantern-jawed, towering Frank I’ve historically enjoyed (Zeck and Lee’s work come to mind). But please understand, I’m aware this is a critical, subjective nitpick of mine; I’ve said my piece, and I will move on now, slinking back into the shadows from whence I came. I really think this run has been beautifully wrought, and as usual, Cory Petit has been at his best. One last note, I’ve loved Smallwood’s ode to Dolph Lundgren’s Punisher-look in the covers of this run; it’s been an additional layer for me to love. 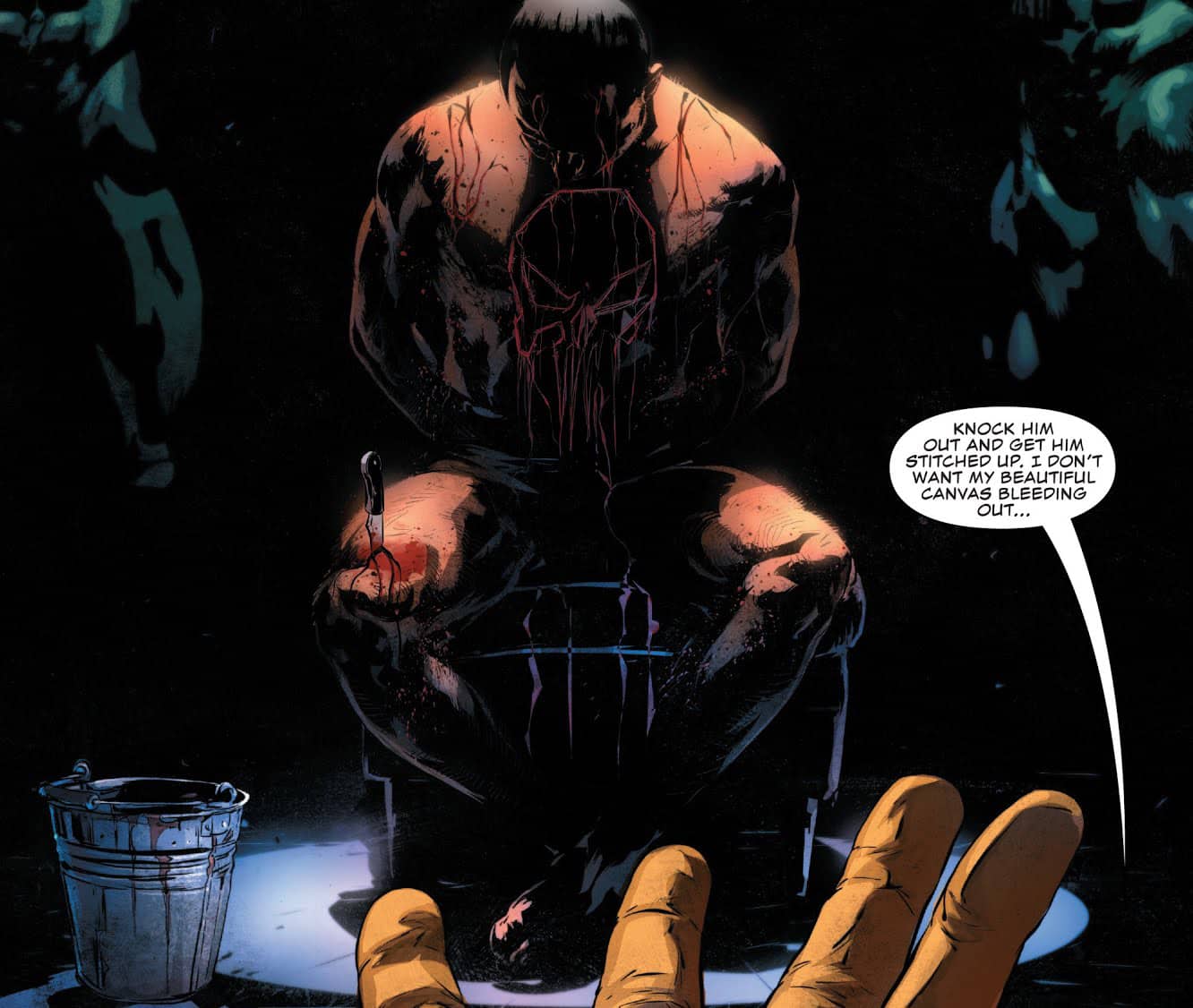 Though this is my first review for this run, I’ve been on board since this run began, and Rosenberg’s Punisher hasn’t taken its foot off the gas from the get-go. This run was my favorite ongoing Marvel book of 2018, and the stakes just keep rising higher. The day in the life of Zemo was genuinely humorous, but not ridiculously over the top; I also felt that his sadistic session with Frank was nasty and cringe-worthy, but not overwrought to the degree of zany super-villainy. The torture and solitary confinement have worn Frank’s mind nearly to the nub of an animal, which we all know is to Zemo’s ultimate detriment, and I’m excited to see how this beast is unleashed! 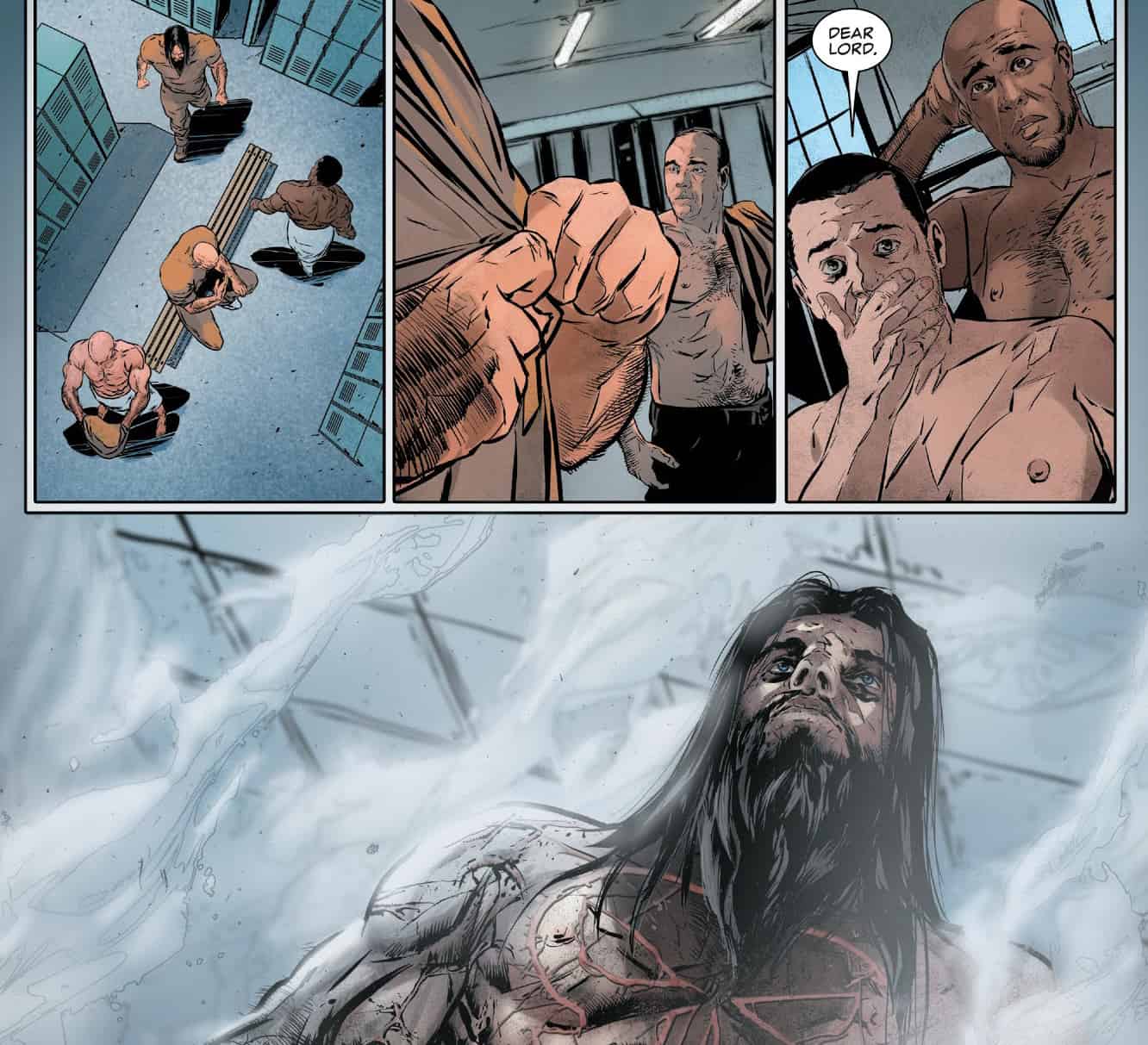 Rosenberg knows how to hit the ground running without breaking stride, which is exactly what an excellent Punisher mag demands!

Punisher #6: Wrong Us, Do We Not Revenge?