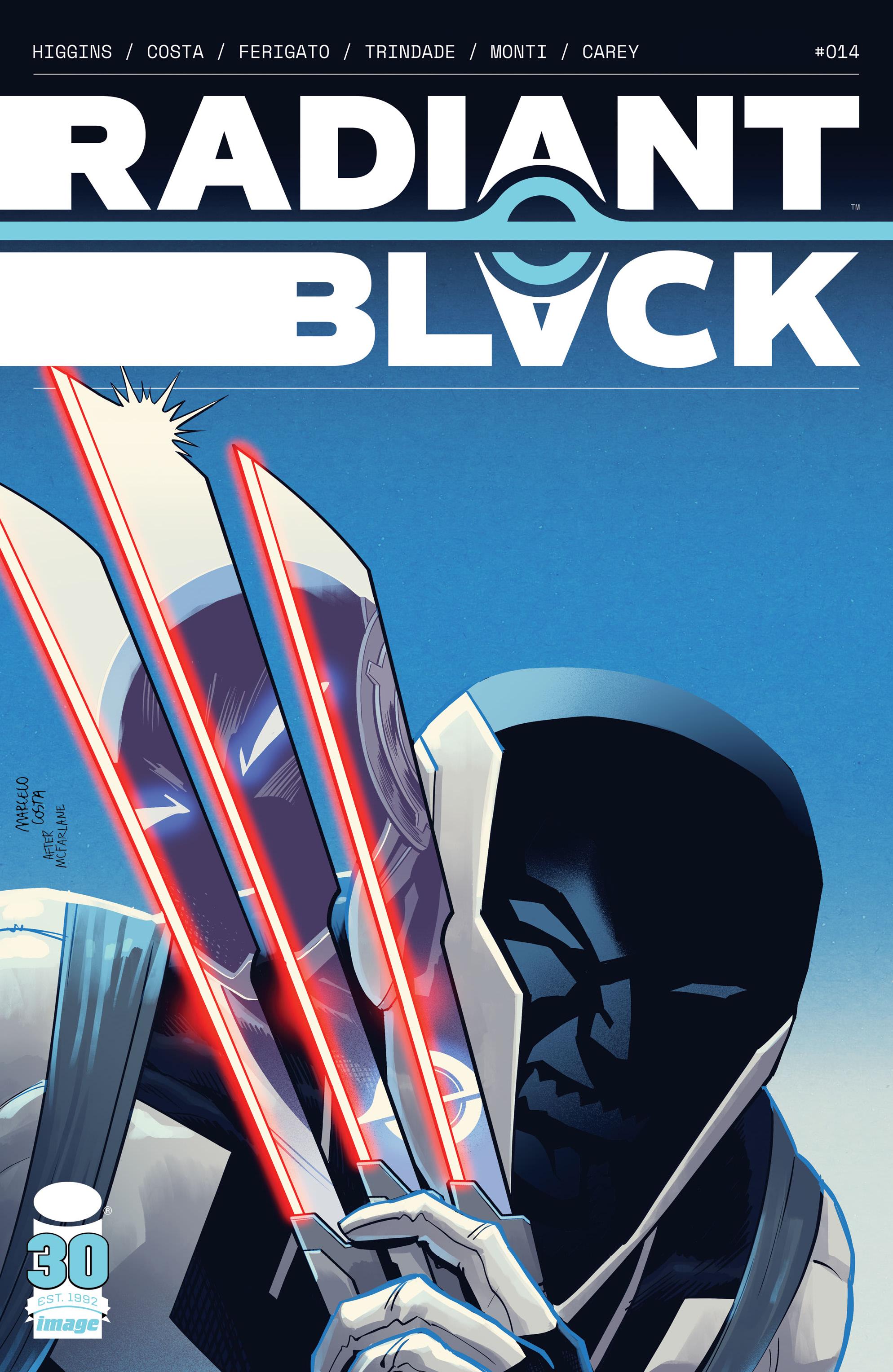 Enough is enough. It’s time for Marshall to take the fight to EpicFront and put an end to this parade of supercriminals for good. But they won’t be going down without a fight—and could their new weapon be strong enough to turn the tables on Radiant Black?

Reading Radiant Black is an experience akin to leafing through My Hero Academia or Invincible for the first time. Each of these series captures a kinetic, fun style that doesn’t feel like it’s justifying itself or its influences. Working through the preceding 13 issues to catch up, the series read incredibly smoothly, thanks in large part to the acceptance of the sentai genre, along with the plotting sensibilities of mainstream superhero comics. There’s an honest love of the superhero genre, and each series wore that on its sleeves during their early circulations. That sense of comfort with the genre and medium makes for a quick but pleasurable read, and it’s apparent why Image and fans alike have gone all-in with Radiant Black and its aptly dubbed name of the Massive-Verse.

Issue 14, written by Kyle Higgins with art from Marcelo Costa & Eduardo Ferigato, inks by Jonas Tindade, coloring by Igor Monti and Sabrina Del Grosso, and letters from Becca Carey, picks up straight from the previous after Marshall goes too far and beats down a two-bit supervillain, Accel. This sets off a chain reaction of villainous Youtubers (and crypto bros, the truest of villains) coming after Marshall and Radiant Black. Higgins’s script balances the Marshall storyline alongside more hints of Nathan communicating with the Robot source of the Radiant’s powers. Compared to the first two arcs, which explicitly dealt with larger cosmic threats and enemies, it’s a nice breather to be mostly focused on Earth and human villains. The choice to show these profiteering villains serve two interesting functions: working as a foil to Marshall’s attempts at monetizing the superhero life and deepening the world, specifically the human side of it. If the multiple spin-offs and upcoming events haven’t made it clear, the Massive-verse is here to stay, and laying some foundation in these quieter issues is a smart decision. It’s an honest lesson that everything can’t be turned up to 11, or the number becomes meaningless, that mainstream comics should remember.

Sandwiched in between pretty easy fights for Marshall against these streaming villains is a pretty rich emotional conflict. Nathan and Marshall are still out of sync, and it’s clear Marshall is hurt that he’s been replaced as a reward for bringing Nathan back from the dead. Marshall lets out a burst of hurt, and honestly, that feels shocking but totally in line with his character. It’s a foundational scene that reinforces why he’s been rougher with these villains. Even after supposedly hashing out that issue with Nathan, Marshall resorts to even more gruesome methods to take down the remaining villains. The issue leaves Marshall in a place that shows he has not internalized Nathan’s answers and sets up a potential dark road ahead.

Costa and Ferigato’s pencils are still great, and the issue has a couple of standout pages, specifically during the two fight scenes. The composition of the first fight, which is resolved with a single page, is an effective way of showing just how much Marshall has developed with his radiant powers. The kinetic ping-ponging across panels is the perfect way to demonstrate that comfortability. The rapid resolution of the fight not only downplays the supervillains popping up for now but also tells a story of Marshall’s achievements in the short span. The second fight lasts a little longer, but Marshall is still in total control and doesn’t have to break a sweat to dispatch his enemies. Throughout the fights, the artists block Marshall from always standing above the villains, floating above, or using low angles to make the hero seem larger and in control. It’s an excellent use of perspective that shows Marshall’s growth but also plays up that emotional distance from the violence he’s inflicting.

The second fight of the book gets to play with the gravity shift effect and the way it’s rendered both by Costa and Ferigato’s art and Monti and Del Grosso’s colors. 14 issues in, it never ceases to amaze how the team generates a fun, distinct way to see a superpower realized. The artists put a range of gravity effects on display, from dropping warehouse equipment like meteors on one of the costumed villains to snapping a man’s arms like they’re twigs. In both instances, the color heights both actions, with a yellow rendering the impact of the machinery, providing a violent clash against the blues of the page’s background. It’s vivid and visceral, like an explosion going off the moment the villain is crushed beneath. In the other instance, Marshall snaps the man’s arms with a simple blue hue from the gravity manipulation, outlining the arms as the background is bathed in a deep red. The coloring flashes the pain of the action through that red, indicating a pain from the vermillion background. The panel manipulates the senses in a distinct and powerful way, heightening the violence without reveling in blood and gore.

Radiant Black #14 is a strong continuation of what feels to be a breather arc and uses its downtime between massive cosmic threats to establish the emotional stakes for Marshall and Nathan. It also manages to give a sense of the human villains starting to appear on Earth, which is seemingly insignificant compared to those from beyond the stars. Higgins is too experienced and smart of a writer to be revealing this by accident, and it’ll be fascinating to see the way he infuses tension into later fights, and how the art and coloring teams will be able to bring that tension to the page.